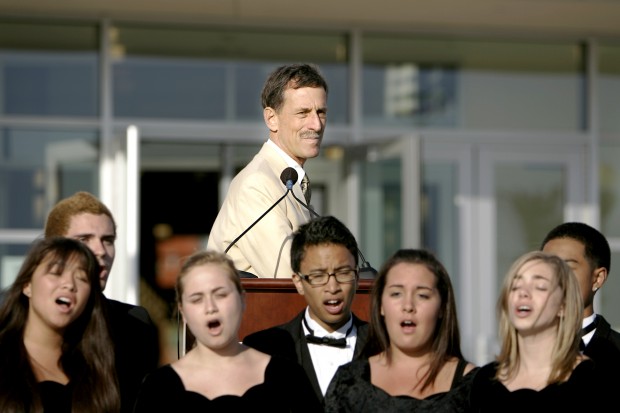 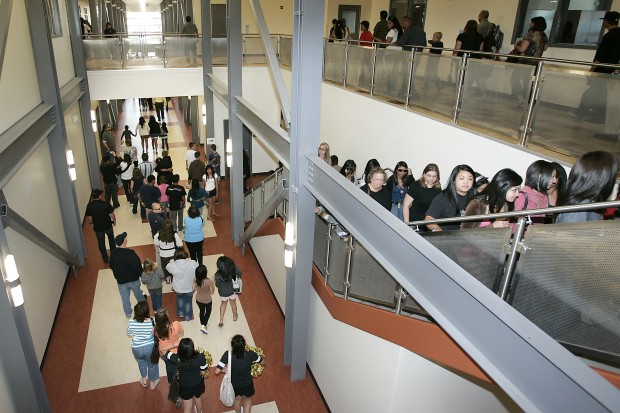 Hundreds of future students, parents and visitors gathered on the campus of the new American Canyon High School Friday to mark the dedication of the city’s first high school, a $160 million project touted as a state-of-the art facility.

“What a proud moment to celebrate with so many people,” American Canyon Mayor Leon Garcia, told the crowd gathered in front of the school as black and gold balloons floated in the breeze.

John Glaser, retiring superintendent for the Napa Valley Unified School District, praised the collaboration between the district, the city of American Canyon and others.

The school, on a 45-acre campus, was constructed thanks to Measure G, the $183 million bond measure voters in the Napa Valley Unified School District approved in November 2006.

Its main features include a football field with artificial turf, a two-story gymnasium, a 400-seat theater, geothermal technology to heat and cool the building, and windows with photovoltaic cells.

The high school is scheduled to open Aug. 18 with about 600 freshmen and sophomores.

“We hope you enjoy the school, and please, take care of it, Go Wolves!” said Rick Martellaro, president of Lathrop Construction Associates Inc. of Benicia, the project’s general contractor.

The one-hour ceremony ended with Brewer and two students, Ryan Morofsky and Yasmin Zepeda, cutting the ribbon to the administration building and allowing the crowd to tour the campus for the first time.

Students and parents who came to tour the campus said they look forward to the new school year.

Flor and Jaime Avina came to tour the campus with four children and two young relatives. Their oldest daughter, Cynthia, will be a sophomore at the new school.

Students were also present to serve as tour guides after the ceremony.

“It’s going to be something spectacular,” said Brandon Matel, 14, a freshman at the new American Canyon High School, adding he won’t have to ride the bus to Napa.

Downtown Napa's duck and chicken duo are no more

The Register holiday calendar: What to see and do in the Napa Valley

The holidays are in full swing in Napa County. From American Canyon to Calistoga, you will find a host ways to celebrate the season, including parades, concerts and much more.

Some Rutherford property owners will give land for Bale Slough habitat restoration to help steelhead trout and other wildlife.

The event, organized by the Downtown Napa Association, will start at 6 p.m. at Veterans Memorial Park.

A Vallejo man was arrested after leading American Canyon Police officers on a vehicle pursuit on Thanksgiving night, according to the department.

A parking lot in Napa's Oxbow neighborhood could become home to a 170-key hotel, 130 residences and retail shops.

American Canyon Police are seeking two men it said were the driver and passenger of a car that eluded officers during a high-speed chase Tuesday.

China's protests over lockdowns spread to campuses and communities abroad

China's protests over lockdowns spread to campuses and communities abroad

People fill the hallways and stairs of American Canyon High School during a self-guided tour following dedication ceremonies for the new school on Friday evening. J.L. Sousa/Register
© Copyright 2022 Napa Valley Register, 1615 Soscol Ave. Napa, CA 94559 | Terms of Use | Privacy Policy | Do Not Sell My Info | Cookie Preferences
Powered by BLOX Content Management System from TownNews.com.
You don't have any notifications.