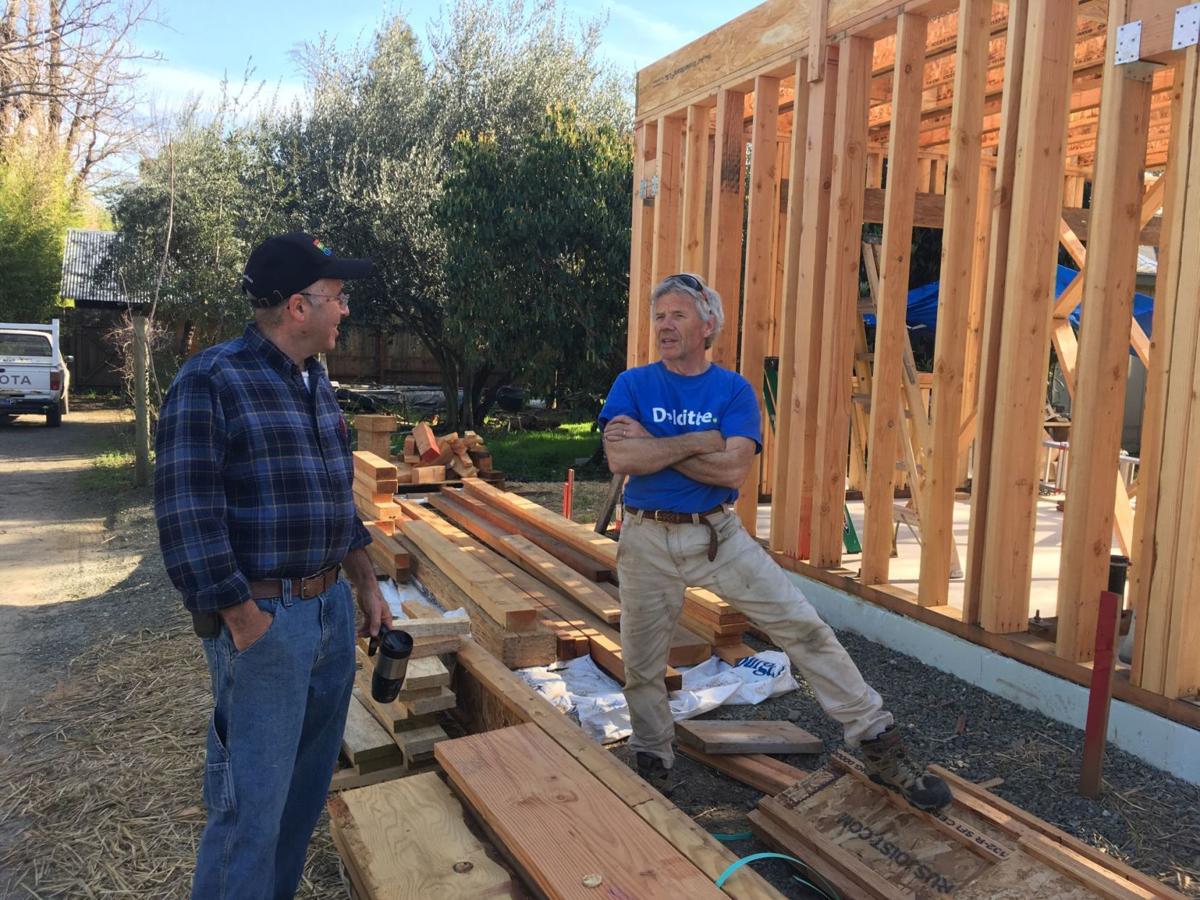 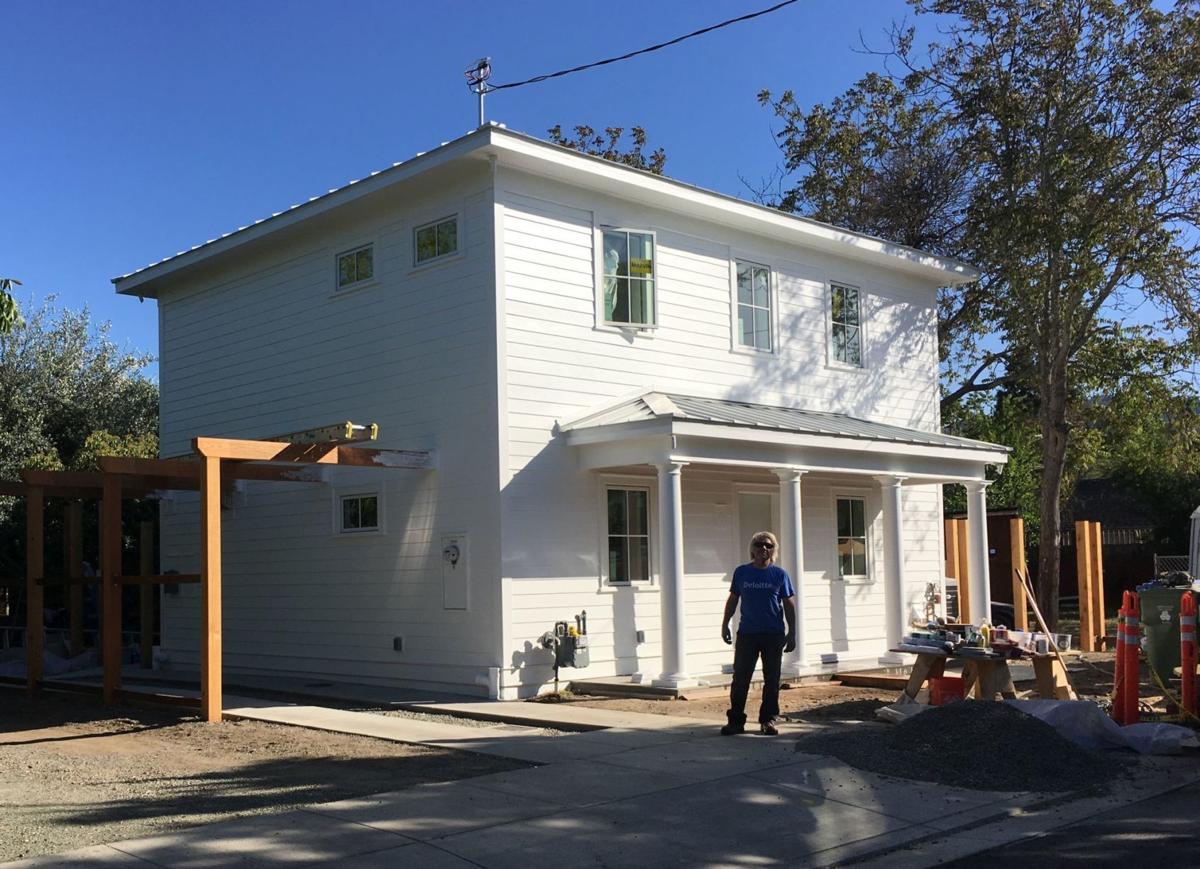 Michael Byrnes stands in front of the house he built by himself on McCorkle Avenue. 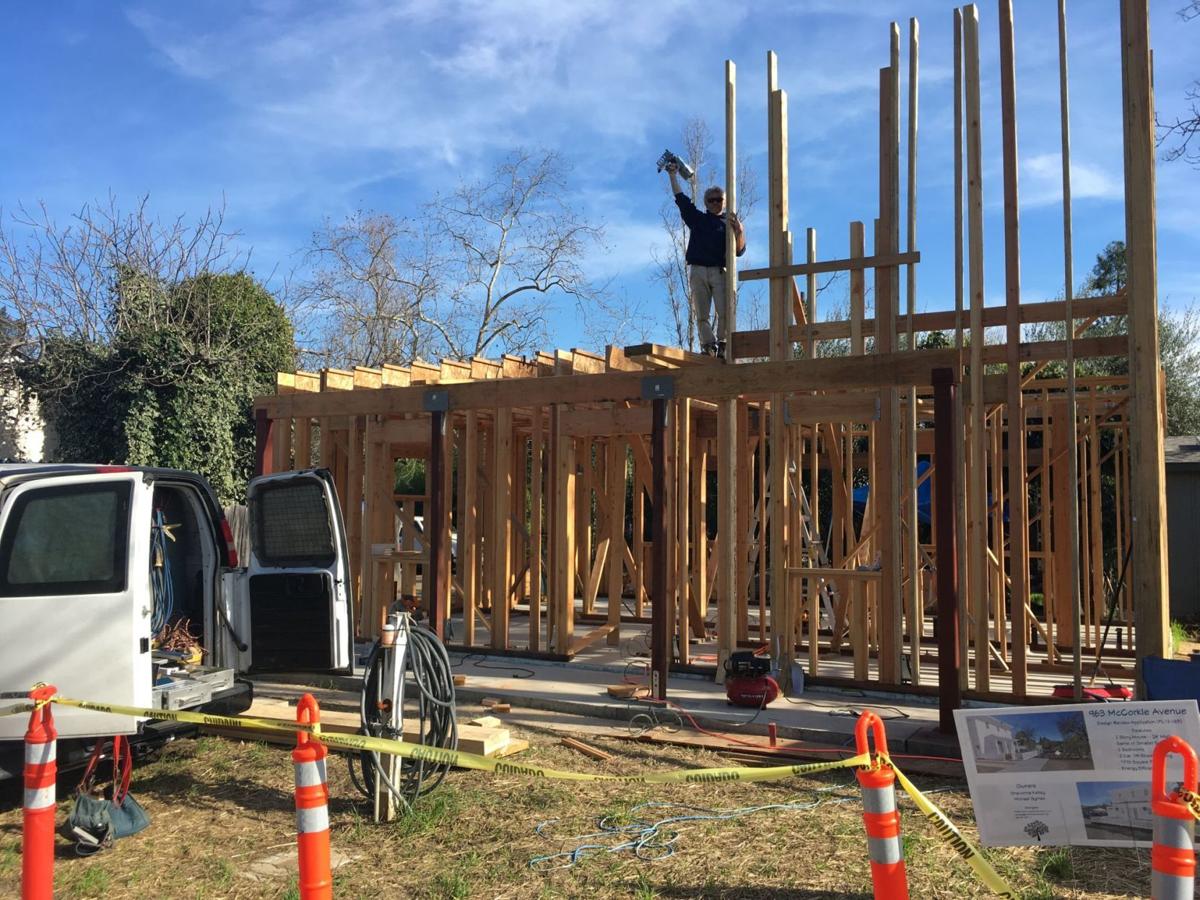 Michael Byrnes works on the framing of his house on McCorkle Avenue.

Construction projects tend to be drawn out and full of unpleasant surprises, but Michael Byrnes’ St. Helena dream house set a new bar.

He lost his mother, his construction loan was almost canceled, he caught a nasty case of COVID-19, he suffered two potentially life-threatening falls, construction took more than two years, and he had to do most of the work by himself.

Byrnes says if he’d known what an ordeal it was going to be, his reaction would have been, “Yeah right, I’m out of here.”

However, he overcame every obstacle one by one and is now proudly living in the house with his wife, Shavonna Kelley.

Byrnes bought the small lot at the end of McCorkle Avenue in 2018. He secured Planning Commission approval to demolish the existing house and replace it with a 1,372-square-foot house of his own design.

Byrnes has an extensive background in architecture, carpentry, construction management, financial consultancy for contractors, and design/build contracting. His goal was to design a modest farmhouse — no garage — that would fit into the surrounding neighborhood so neatly that it could pass for a remodel instead of a new house.

After demolishing the old house and laying the foundation for the new one in July 2019, he got word that his mother in New York was dying. He drove across the country to say goodbye and get her affairs in order, then returned to the Bay Area “grief-stricken and clearly not playing with all my marbles,” as he recalls.

“There’d been no sign that she was in decline, just all of a sudden — uh oh, she has five days to live,” he said.

The bad news kept coming. Byrnes’ beloved cat Miles died. His car was totaled in an accident. A noxious plume from the Kincade Fire in Sonoma County settled over St. Helena, which was hit by scattered power outages. January rainfall made it difficult to start the framing.

Meanwhile a South Bay business associate he’d been counting on to help him with construction, based on favors Byrnes had previously done for him, backed out, Byrnes said.

And so he did, with assistance from neighbors like John Yates, who helped with some of the larger trusses, Said Nuseibeh, who lent tools, and retired firefighter Brian Streblow, who was walking his dogs in the area when he saw Byrnes struggling to lift some beams. Byrnes said he's grateful to all of his neighbors for tolerating years of construction.

Byrnes had done framing in college, and he was quite familiar with the project plans, having drawn them himself. However, California’s building code is highly demanding — “there’s 10,000 nails in that little house,” Byrnes said — and framing is typically handled by an entire team, not one guy.

“It got to where I couldn’t open my hands in the morning,” he said. “I felt like I was out of my league.”

Byrnes completed the framing, roofing, windows and half of the siding by himself. He said it was “backbreaking” work — almost literally, on the two occasions he fell from the structure. He credits his martial arts training with teaching him how to fall without serious injury.

Financing presented another challenge. The price of construction materials rose during the pandemic, so Byrnes’ lumber budget, not including trusses, jumped from $27,000 to $38,000.

In early 2020, Byrnes’ lender announced it was recalling its construction loan, including his.

Byrnes pleaded with his loan officer. Impressed by Byrnes’ quixotic one-man construction project, the loan officer took pity and agreed not to call the loan — as long as Byrnes kept working by himself.

The pandemic reared its ugly head again in December, when Byrnes came down with COVID-19.

He wanted to go to the hospital, but he couldn’t be admitted unless his blood oxygen level fell to 89. It was at 92.

It took weeks for him to regain his strength and get back to work in February. After a final round of inspections, the house received a certificate of occupancy on May 25.

The house has a number of details that have great personal significance to Byrnes, including some wisterias he’s planting as a shrine to his late mother. He and Kelley will rent out the house and move in permanently when they retire, but he vows never to sell it.

“Building a house by yourself means you can put a lot of love into it,” Byrnes said. “There are so many things about it that connect to my past or give honor and thanks to the people who trained me. Other people won’t see it, but I know it’s there.

“In that sense, it’s probably the most meaningful thing I’ve done in my entire life.”

No major injuries after plane runs off Texas runway

No major injuries after plane runs off Texas runway

In the wake of her own loss, a Napa mom has become an advocate for those facing addiction.

Wine label printer ASL Print FX has a robust plan for growth at its new south Napa location ... if it can obtain electricity, according to vic…

David Harberts isn’t the kind of guy who gives up. Especially when it comes to his family’s longtime business, Napa’s Bubbling Well Pet Memori…

From FBI agent to PI: The life of a Napa private investigator

If you’re cheating on your spouse, you had better watch out. Dawn King just might be onto you.

Facing the loss of her house and everything she owned, Nancy Christiansen evacuated her Silverado area home on the first night of the October …

Michael Byrnes stands in front of the house he built by himself on McCorkle Avenue.

Michael Byrnes works on the framing of his house on McCorkle Avenue.