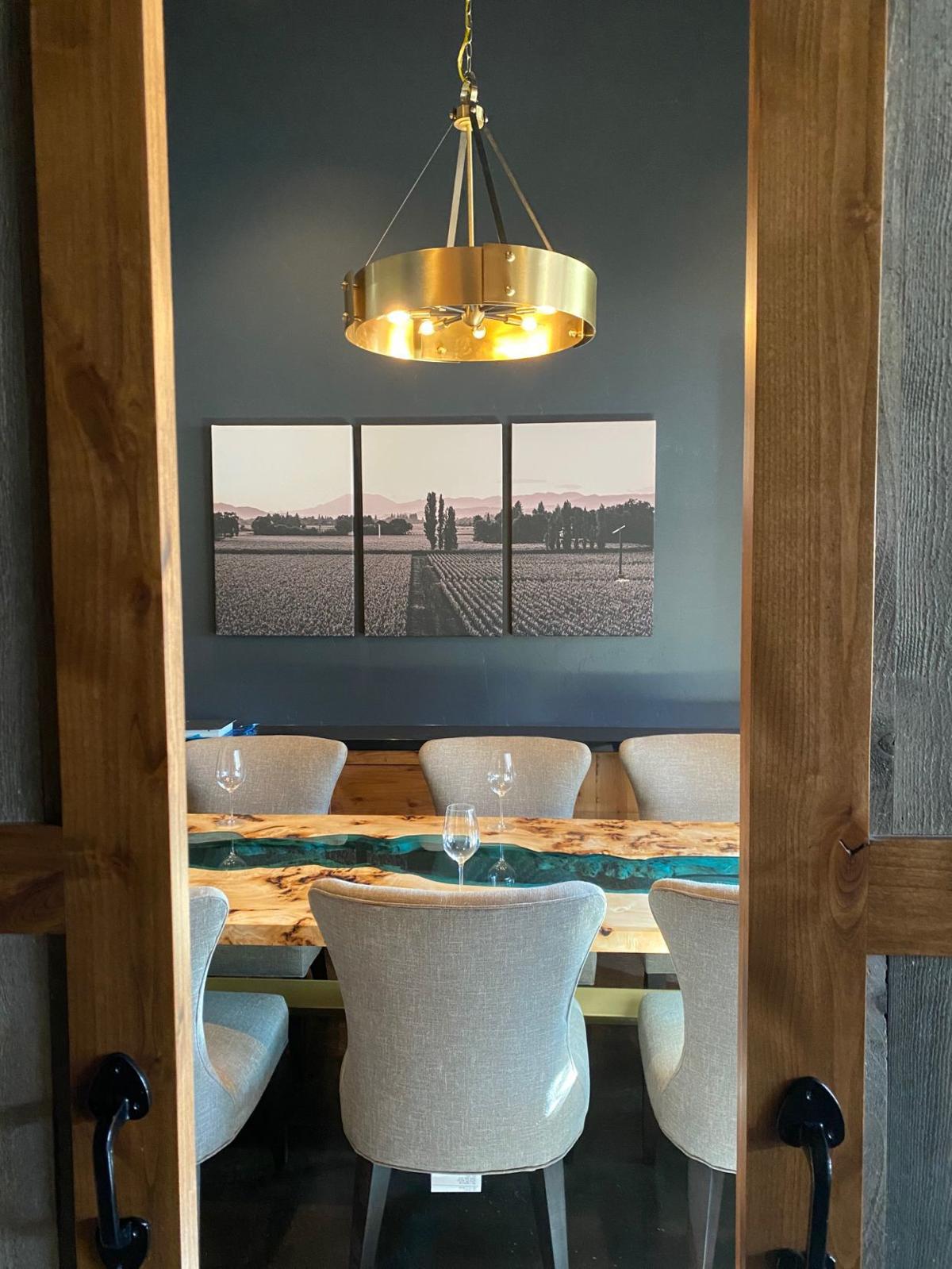 A private room at The Find, a new vintners collective to open in Danville in early March. The owners, three vintners based in Napa, hope their "wine country" transplant will appeal to residents across the spectrum of age and taste. 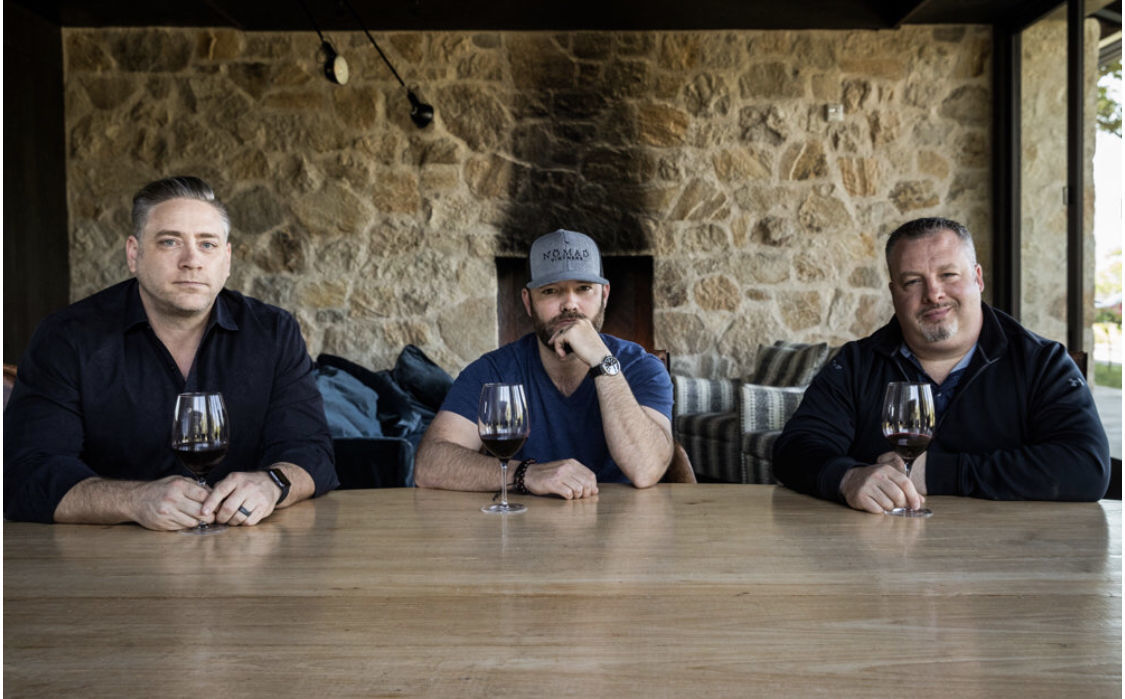 Three vintners from Napa Valley will open up a Napa Valley tasting room in Danville in early March. They aim to bring a piece of wine country to consumers outside the North Bay. Pictured, left to right: Jason Moore, Louis Calli and Andrew Renda.

Wine country has long been a term synonymous with the Napa Valley, flecked with wineries and blanketed by vineyards. As the area’s industry members attempt to reconcile competition with continued growth, a handful think they have an answer: by taking wine country elsewhere.

That’s the idea behind The Find, a new vintners’ collective set to open in March, featuring 12 boutique wine labels, with 11 from Napa.

The sister property of the Wine Thief, whose founder Andrew Renda is one of three co-owners, The Find will offer much of what Renda’s Napa property does: wine from boutique Napa Valley labels, ambiance, a chance to interact with winemakers. It’s just that The Find will offer those things from its recently finished retail space in Danville, in the East Bay.

Though it’s still Northern California, Danville is by no means “wine country” the way much of the North Bay is. But Renda and his co-founders, Louis Calli and Jason Moore, say they’ve found something in Danville that simply doesn’t exist in the Napa Valley: minimal competition.

There are, of course, other bars in Danville, and some do prominently feature Bay Area, and even Napa Valley, wine lists. But still, The Find is essentially on its own as a kind of transplant tasting room.

Napa County permits stand-alone tasting rooms – that is, those not accompanied by a winery – within the limits of its respective cities. Currently, there are 40 in downtown Napa, according to Downtown Napa Association Executive Director Craig Smith, and even more county-wide.

“It’s just hard to do this in Napa, but the other part of it is that everybody else is already doing it,” Calli said, of opening a downtown tasting room. “So we thought – why not do it where no one else is doing it?”

Renda, whose collective experience at the Wine Thief and at Vintners Collective as director of sales before that has kept him in downtown Napa for more than 15 years, says he’s still fully invested in the Wine Thief. But he said things have changed since he arrived in the industry. As time has gone on, he said, visitation has “been a struggle.”

“This doesn’t mean we’re not excited to be here and do what we do,” he said of the Wine Thief. “But taking this idea out of the proximity of wine country and putting it in people’s backyard – it’s something very exciting.”

“The way consumers engage with wine is changing, but they still want to engage with wine,” Calli said. He cited Generation Xers and millennials, whose respective interest in wine has not yet matched that of the baby boomer generation.

“We’re trying to get in front of this massive shift the industry is going through right now, so we said ‘Why don’t we take this show on the road, and go to them?’”

It was a concept that Renda had long been considering, he said. The three pulled the trigger on the idea after seeing the space in Danville, feeling that the existing downtown and well-to-do demographics of the city would be conducive to their success, according to Calli.

“I’ve always wanted to see how this collective boutique concept would do elsewhere,” Renda added. “For years, a lot of great customers have asked what this would be like in New York or Atlanta. Everybody wants it in their backyard, but they don’t understand what it takes to bring that to fruition.”

Permit fees cost almost half a million dollars in Danville; Calli said he believed it would have been even more expensive in Napa, where regulation is far more nuanced and where similar downtown space would have been less accessible for The Find.

Their Danville location at 312 Railroad Ave. will open March 6, and offer the wines of their participating vintners as well as small plates, Renda said.

Patrons will also have the chance to interact with winemakers on their Napa properties through a sophisticated video chat system, Calli said. The trio is hopeful that the boutique nature of their featured wines will appeal to customers, evoking the one-on-one experience of early, storied Napa tastings held by the winemakers themselves. (Moore already offers virtual tastings of his label, Modus Operandi).

If The Find is ultimately successful in Danville, they see no reason to stop there.

Barrel company with address in Napa is alleged scam

A private room at The Find, a new vintners collective to open in Danville in early March. The owners, three vintners based in Napa, hope their "wine country" transplant will appeal to residents across the spectrum of age and taste.

Three vintners from Napa Valley will open up a Napa Valley tasting room in Danville in early March. They aim to bring a piece of wine country to consumers outside the North Bay. Pictured, left to right: Jason Moore, Louis Calli and Andrew Renda.