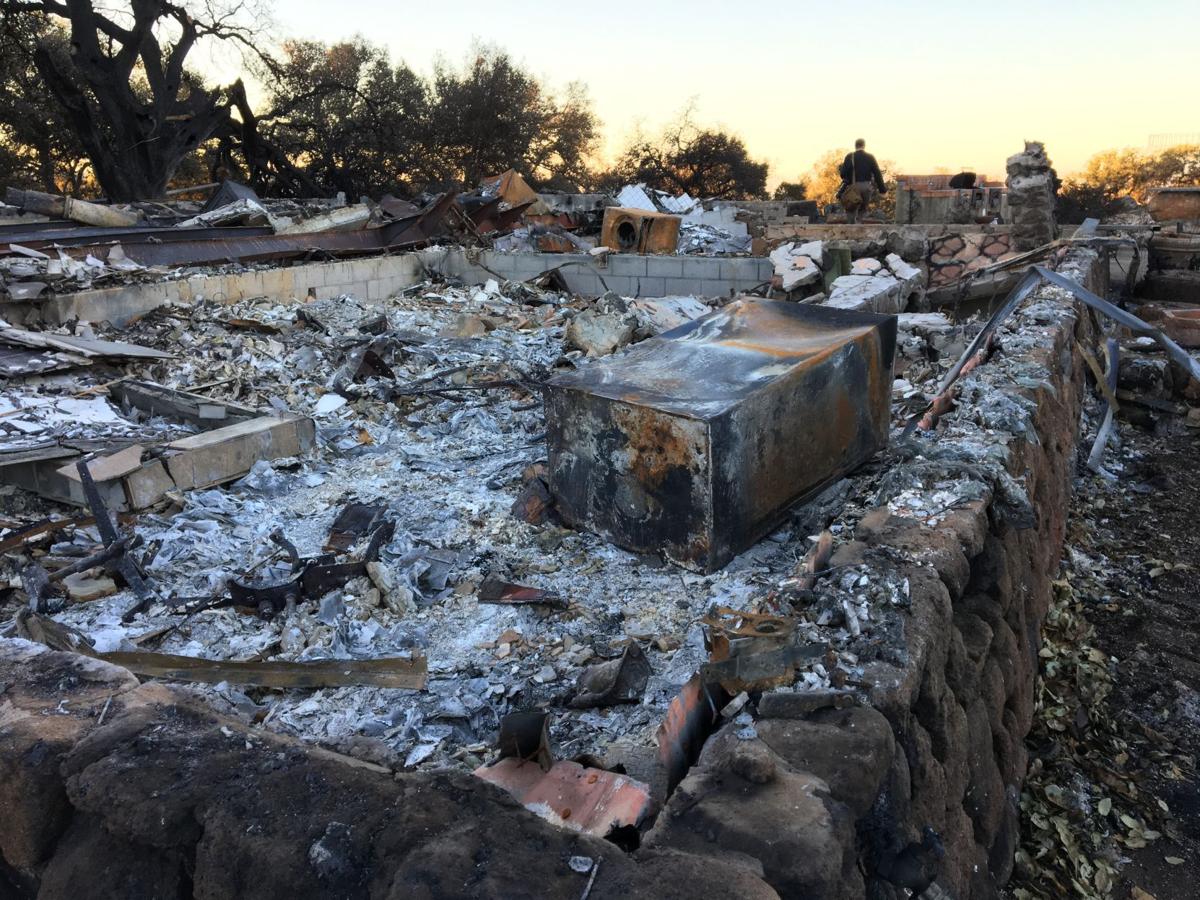 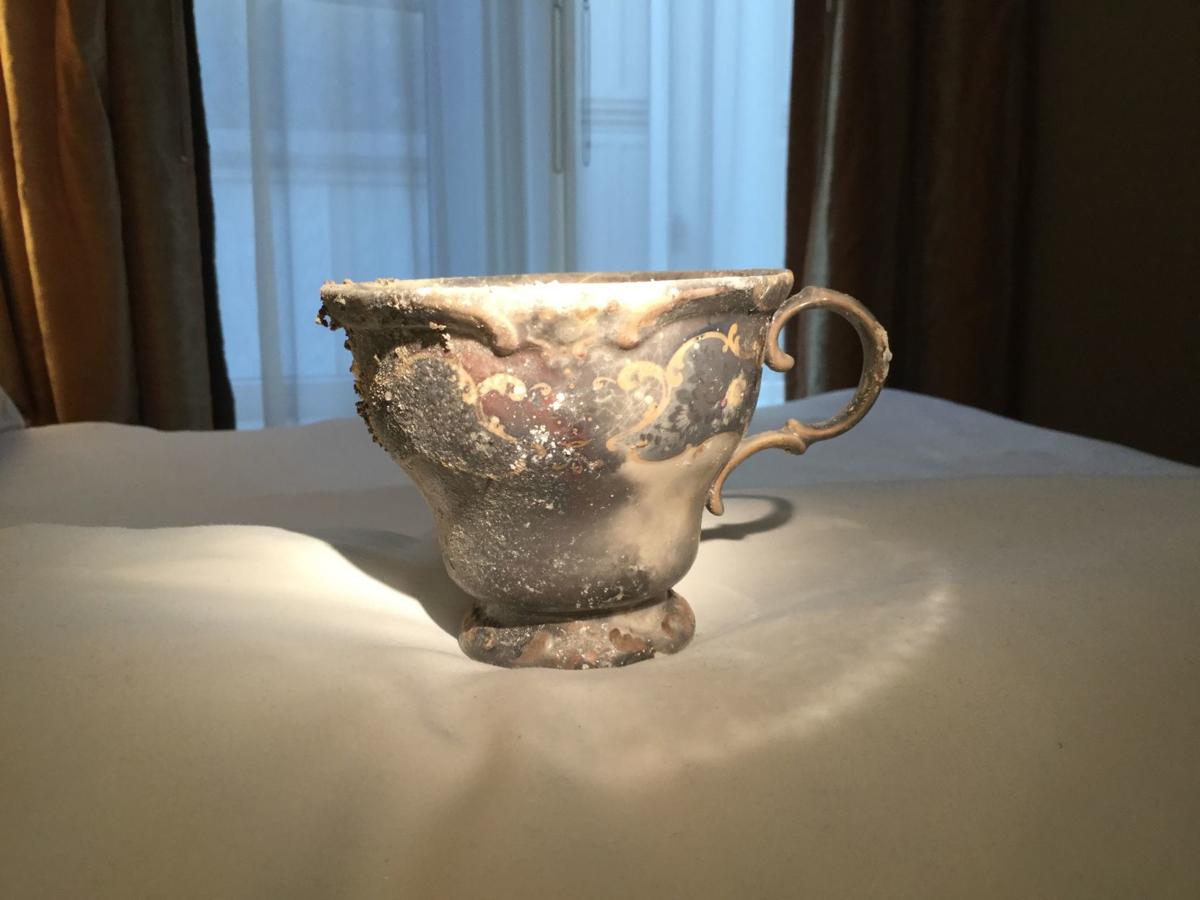 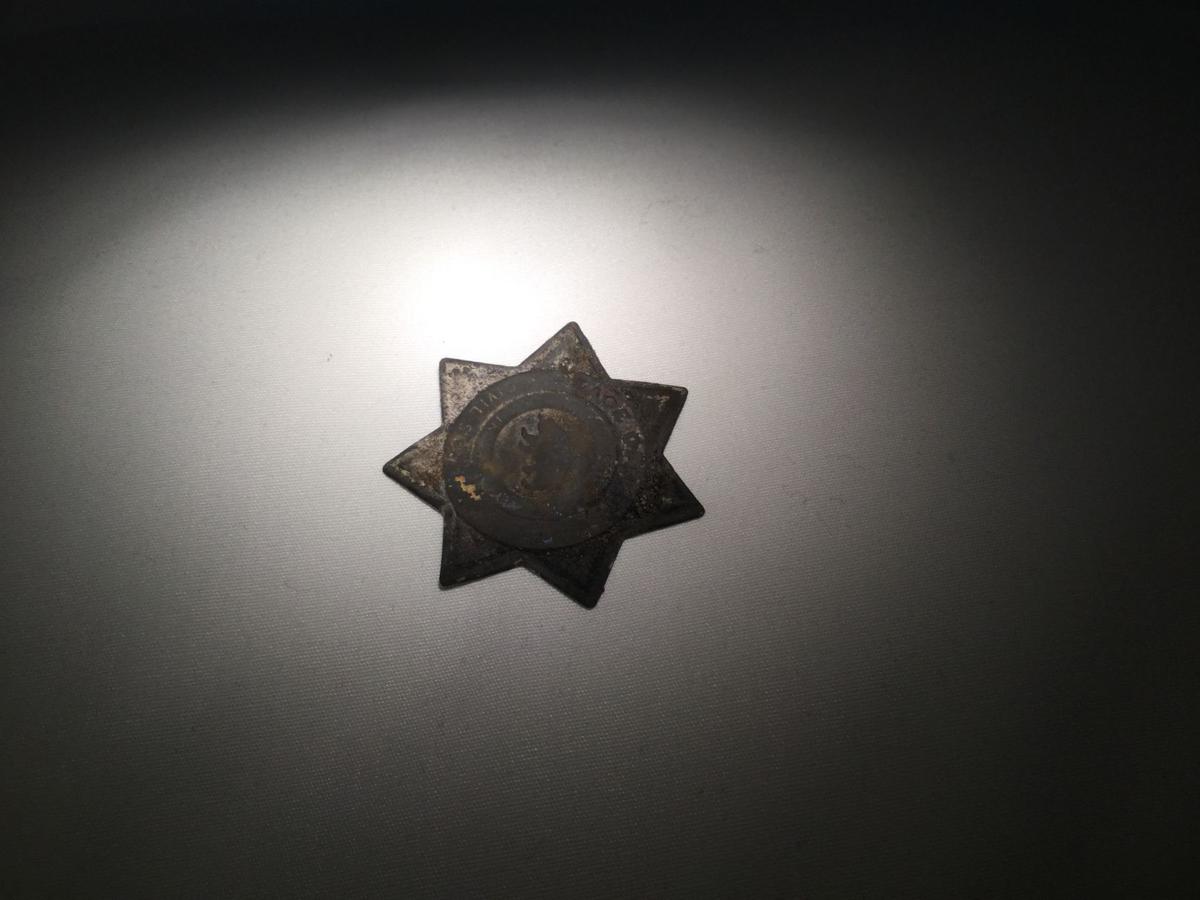 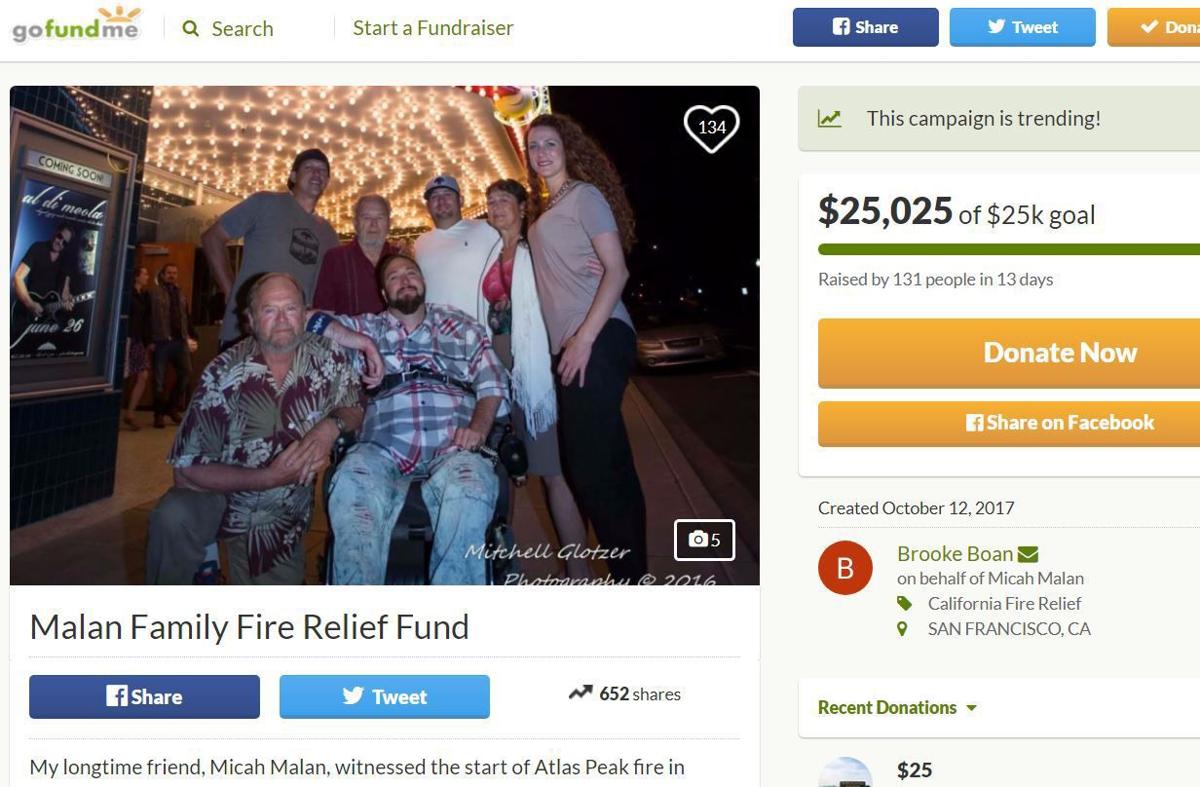 Today, she and her family are homeless themselves. Their longtime family house on Atlas Peak was destroyed in the Atlas Fire.

The family — which includes her retired husband Jack, a quadriplegic adult son Micah who uses a wheelchair, an adult son Joshua who is recovering from a bus accident, a team of live-in medical caregivers and the family’s animals — now faces the long process of rebuilding their lives.

“We’re all trying to do whatever we can to help each other and get back to our home,” she said.

On that Sunday night, before the Atlas Fire roared over the hill behind her house, Chris Malan was at Queen of the Valley Medical Center.

In a strange twist, Joshua Malan had been hit that weekend by a bus during the Safeway Open Concert Series at Silverado Resort and Spa. He’d been hospitalized for his injuries and while he recovers is also in a wheelchair.

On her way back home, as she got closer to the family compound at 2945 Atlas Peak Rd., Malan described ferocious winds and debris flying everywhere.

“Power lines were swinging,” she said. She thought she heard transformers exploding. “It was extremely dangerous conditions.”

Back at her house, Malan said she smelled smoke.

“We were looking for the flames,” but didn’t see anything, she said. She and others at home that night were talking about whether or not they’d have to evacuate when one of Micah Malan’s caregivers, Stephen Boschetti, sounded the alarm.

“We ran outside and the whole ridgeline behind our house was like a tsunami wave of flames,” recalled Malan. “They were leaping high in the air and blowing up trees. We had to run. I got my purse and keys and helped my son Micah into his chair.”

Driving down Atlas Peak Road in multiple vehicles, the group got separated. Chris and Micah Malan made it down to the Silverado Resort where she saw firefighters staging.

“I begged them to hurry,” she recalled. “I said, ‘Go fast, there is a terrible fire storm up there.’”

Meanwhile her husband had stopped along Atlas Peak Road to help alert neighbors — some of whom were still sound asleep.

Boschetti and a second caregiver, Joe Padilla, also fled — one by car, one by motorcycle.

At one point, some of the group got stuck behind a fallen tree that blocked Atlas Peak Road. After an agonizing wait, it was cleared.

Everyone eventually reunited at the Westin Verasa hotel in downtown Napa where Malan had found a room.

“We were the first fire refugees to hit the Westin,” she said. “I told them, get ready. You’re going to have a lot of people.”

Malan said during that night she held out hope that the house would be safe. The home, where they lived for some 40 years, survived a big fire in the same area in 1981, she noted.

“You never know what a fire is going to do,” said Malan, “but when I saw the tsunami waves of flame coming, I knew in my heart of hearts,” that it wasn’t going to make it.

Several days after the fires, the family was escorted up Atlas Peak Road to see what was left.

In all, three homes were lost: two houses on the Malan property and one nearby house where one of the caregivers lived.

Everything was gone, she said, even papers and items she’d placed in a new safe.

“I thought I was smart having things in the safe. But it didn’t make it. It all melted.”

The only bright spot was finding their chickens were alive.

As of mid-week, the family was still at the Westin, but making plans to relocate. “We’ve been scrambling trying to find another place to live,” said Malan.

A house for Joshua Malan and his two children has been secured.

“The rest of us are looking for a place to rent while we rebuild,” she said.

When asked how she is holding up after such a crisis, Malan said she has no choice.

“I have been very, very focused on tasks and trying to put my emotions aside,” she said. “I have two sons in wheelchairs. There is no time for crying or sobbing now.”

“I wake up in the morning and I start my list,” she said. “I try to accomplish three major tasks a day.”

The priority is finding an ADA-accessible home that has room for Micah Malan’s two caregivers and the family’s dogs.

Malan said she knows that’s a tall order these days. “I just put the word out far and wide and trust the universe will bring it back to us.”

The insurance company told Malan that the recovery and rebuilding process could take two years. Even though they had insurance, the Malans’ house will be impossible to reproduce, she said.

It was a piece of art, said Malan. Her father, a masonry contractor, did much of the work. Over many years, she said, “We slowly built our dream home.”

Malan paused for a moment. “As I’m saying this, it’s very emotional. It’s a home built from blood, sweat and tears. We cannot replace it.”

While Jack Malan is retired, Chris Malan has been a county employee for more than 30 years and was also a candidate in the District 4 supervisor race in 2016. She is known locally as an ardent environmentalist.

Her most recent county job is as a drug and alcohol counselor helping the homeless at the South Napa Shelter.

Malan continues to mourn the loss of the home, as well as the surroundings.

The family built their home next to an ancient oak tree, one that was at least several hundred years old.

The tree survived many years before the Malans bought the property, “but it didn’t survive us,” she said. “I feel terrible about that.”

At the same time, a small amount of comfort came after finding two keepsakes amidst the ruins.

The first was an old Nevada sheriff’s star that Jack Malan’s father had given him long ago.

“That thing has been a conversation piece in our family for years,” she said. The badge is scorched, but not melted. “I was so happy he found it.”

Then, another heirloom was reclaimed. It was a favorite china tea cup that belonged to Chris Malan’s mother, who passed away several years ago.

The tea cup is also scorched and blackened, but intact.

Holding the recovered cup, “I just stared at it for a long time,” she said.

“I felt like my mother was saying, ‘Out of the ashes we rise.’”

Napa business people get tips for fire recovery and rebuilding 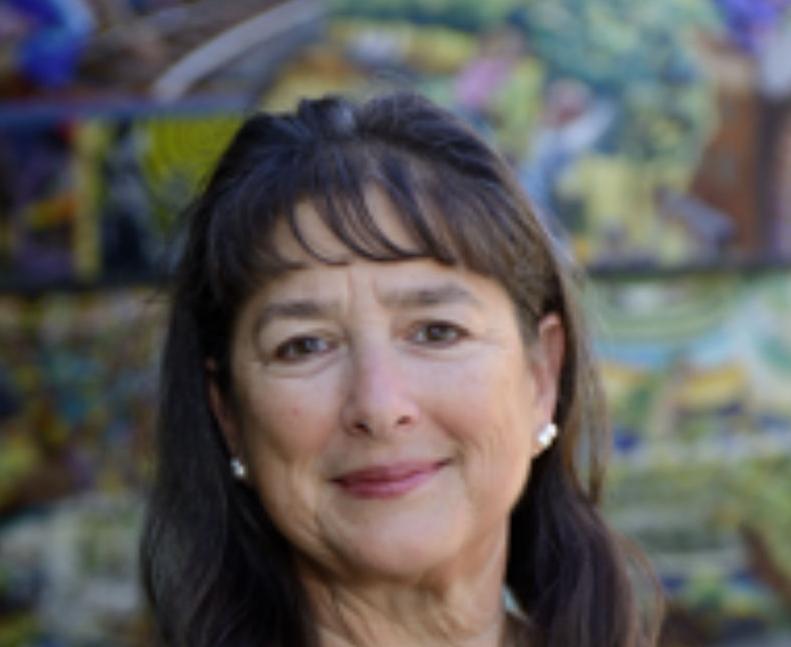