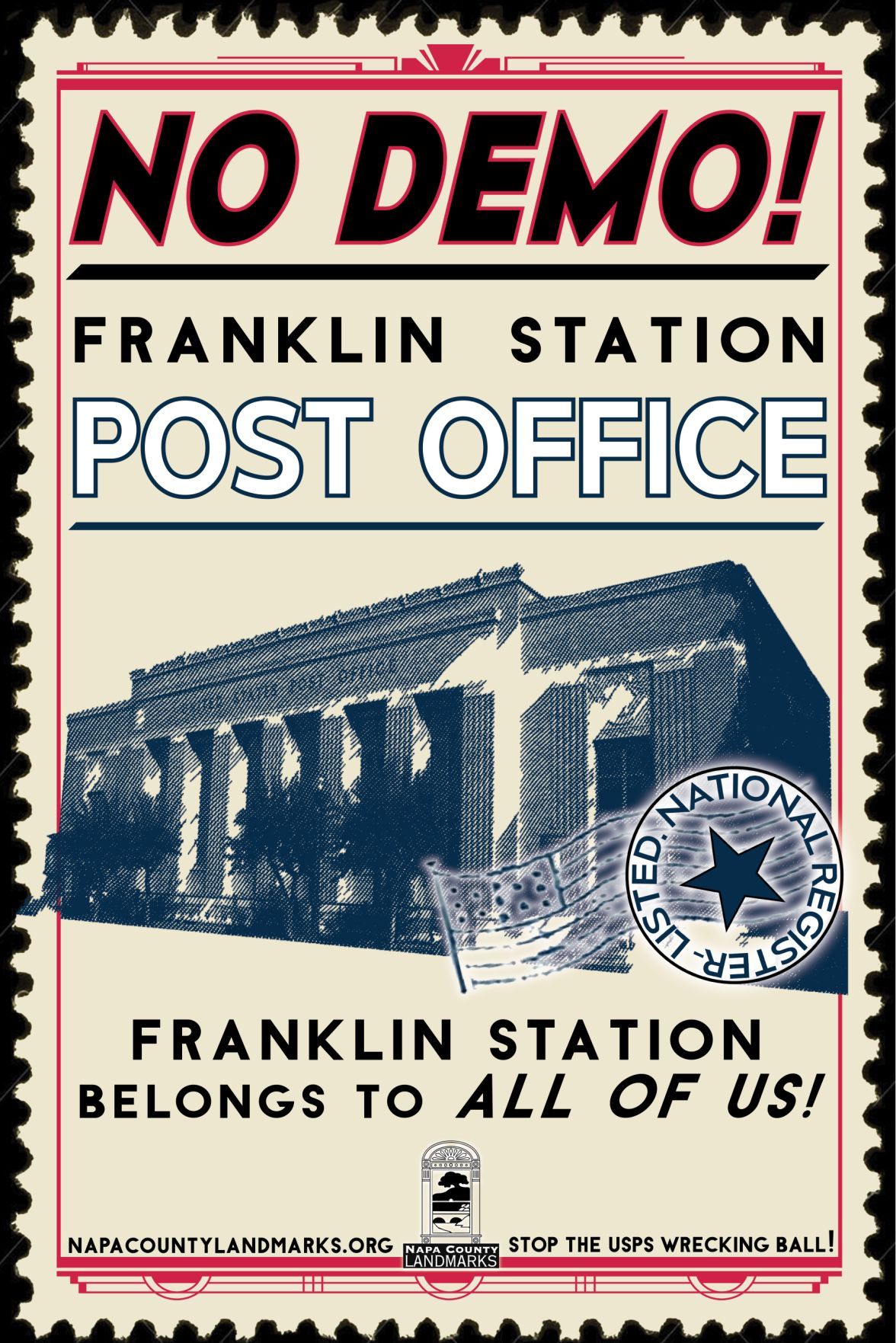 Napa County Landmarks created posters in the style of a large stamp to help raise support for saving the downtown post office. 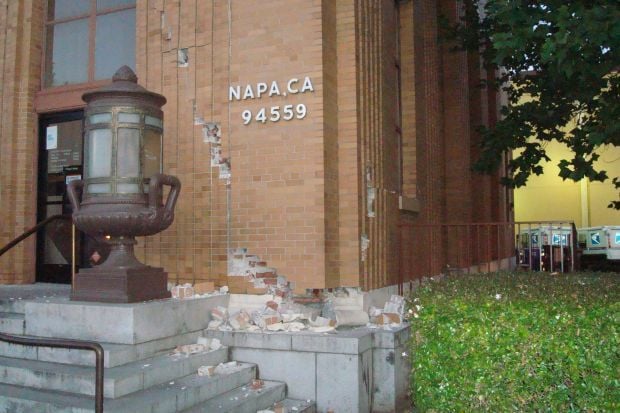 This is how Napa's historic downtown post office building looked on the day of the Aug. 24 South Napa earthquake. The U. S. Postal Service now wants to demolish the building, but preservationists want other alternatives to be considered.

A coalition of local, state and federal officials is rallying to save the earthquake-damaged downtown Napa post office following an announcement by U. S. Postal Service that it plans to demolish it.

“We need to have more information on how the USPS came to the conclusion that demolition is the only alternative,” said Ken MacNab, Napa city planning manager. “It seems premature to make that conclusion.”

The USPS “definitely jumped the gun,” said Stacey DeShazo, director of Napa County Landmarks, a nonprofit that seeks to preserve Napa history and buildings of interest.

“I find it unacceptable that the USPS would pursue demolition of a historic post office when alternative options for preservation have not been exhausted,” wrote Rep. Mike Thompson, D-St. Helena. “The USPS has not engaged the public in meaningful dialog” about the future of the building.

The demolition plan is a “rash action,” said Brian Turner, senior field officer and attorney for the National Trust for Historic Preservation.

Yet, Polanco acknowledged that ultimately, the fate of the post office is in the hands of the USPS . The California Office of Historic Preservation can’t prohibit demolition, she said.

The agency’s role is to ensure the process of considering demolition is “thoroughly and properly” undertaken. If an agreement can’t be made about what should happen with the building, “at that point the USPS can proceed with demolition, should they desire,” she wrote.

In late June, the USPS notified the city and public that it intended to move forward with a demolition plan, later saying that it would cost $8 million to repair earthquake damage, while it would only cost $500,000 for demolition.

"We have to assume the USPS did have some evaluation of the condition of the structure,” said MacNab, who wants to see those reports. The USPS has said it plans to receive public comments, but MacNab wants to know how. "This needs to be a transparent process with opportunity for public input," he said.

MacNab said the USPS needs to consider other options. “It’s reasonable to assess the damage, but where they lost me is jumping straight to demolition. Are there other reuse options or where the building can be preserved? Is it viable to establish a new use there?”

MacNab said the city will work with state and federal representatives, including Thompson, to influence the process. “We are making sure we have a seat at the table with the USPS,” he said.

The city or a private party might have to step forward to save the building, MacNab said.

“Maybe it’s the city in partnership with someone. We just aren’t far enough in yet to know the options,” he said. “There are definitely wealthy people out there that are interested in preserving historic buildings. Someone like that might come forward. You just don’t know. A developer might see some value in preserving it."

However, “I don’t know if the city can tell the federal government they can’t demolish the building,” he acknowledged.

"It’s really important that the public get involved and we hold the USPS accountable to follow the regulations” for preserving historic properties, said DeShazo.

To do that, Napa County Landmarks will host a public meeting to generate support on Monday, Aug. 10, from 6:30 to 8:30 p.m. at the Napa County Library. The group is also coordinating efforts with the city, she said.

“We’re trying to get our message out,” she said. “We’re going to stand up. As a community, we need to be heard.”

The group has created posters that feature a photo of the Franklin Station “so folks can show their support and advocacy to save our post office,” she said.

“NO DEMO” reads the poster. “Stop the USPS wrecking ball. Franklin Station belongs to all of us.”

“I think everyone is unified in opposing demolition of the building,” said Napa City Councilmember Juliana Inman, an architect by profession. She supports a sale of the property. “If they aren’t going to take care of the building and don’t need it as a postal facility, then let’s get it into good hands where it can be restored.”

The National Trust for Historic Preservation has created an online petition to support retention of the Franklin post office.

Persistence can pay off, the Trust's Turner said. “In my experience, a slow, steady rise of continued pressure is the best way to get a better result. Don’t fizzle out. The Postal Service needs to hear from you and they need to hear it again and again.”

A representative from the USPS was not immediately available to comment.

On Thursday, Thompson co-wrote HR 1501, a bill that would prohibit the USPS from closing, consolidating, selling or otherwise disposing of any historic postal facility without prior written approval from the Committee on Oversight and Government Reform of the House of Representatives and the Committee on Homeland Security and Governmental Affairs of the Senate.

For details, call 255-1836, or visit napacountylandmarks.org

A cluster of dignitaries turned out Tuesday morning to officially open a downtown post office that most participants hope will be short-lived.

It’s been 14 months since Napa was rocked by the August 2014 earthquake, but for those who stepped inside downtown’s historic post office buil…

A potential buyer has been identified for downtown’s historic post office building, but the sale is not yet complete and the bidder’s name has…

The U.S. Postal Service may have a new buyer for the earthquake-damaged Franklin Street post office, whose cracked brick facade has loomed ove…

Napa County Landmarks created posters in the style of a large stamp to help raise support for saving the downtown post office.

This is how Napa's historic downtown post office building looked on the day of the Aug. 24 South Napa earthquake. The U. S. Postal Service now wants to demolish the building, but preservationists want other alternatives to be considered.