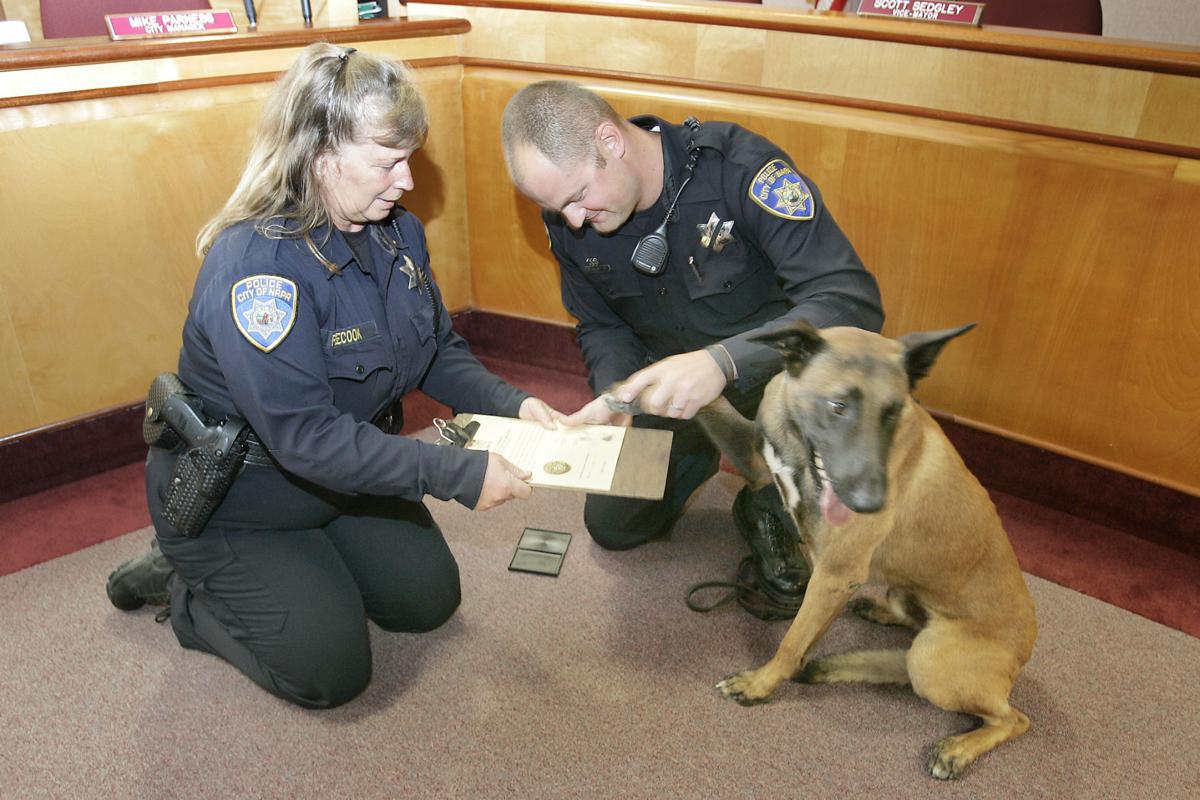 Napa Police Lt. Debbie Peecook, left, gets the pawprint of Rocky, a K-9 officer that was sworn in on Tuesday morning at City Hall. Rocky is the department's second K-9 officer and joins partner Brett Muratori, seen assisting. 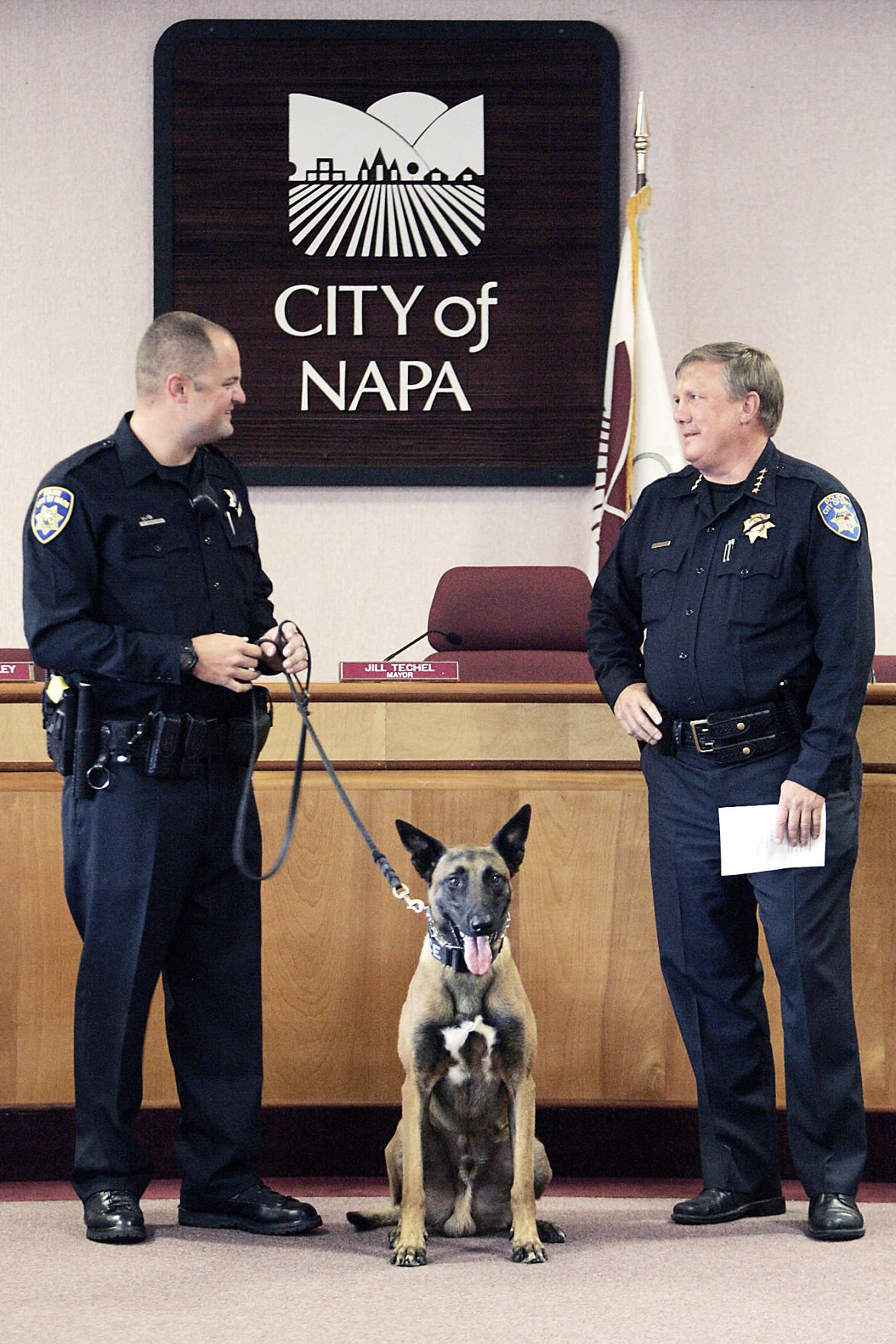 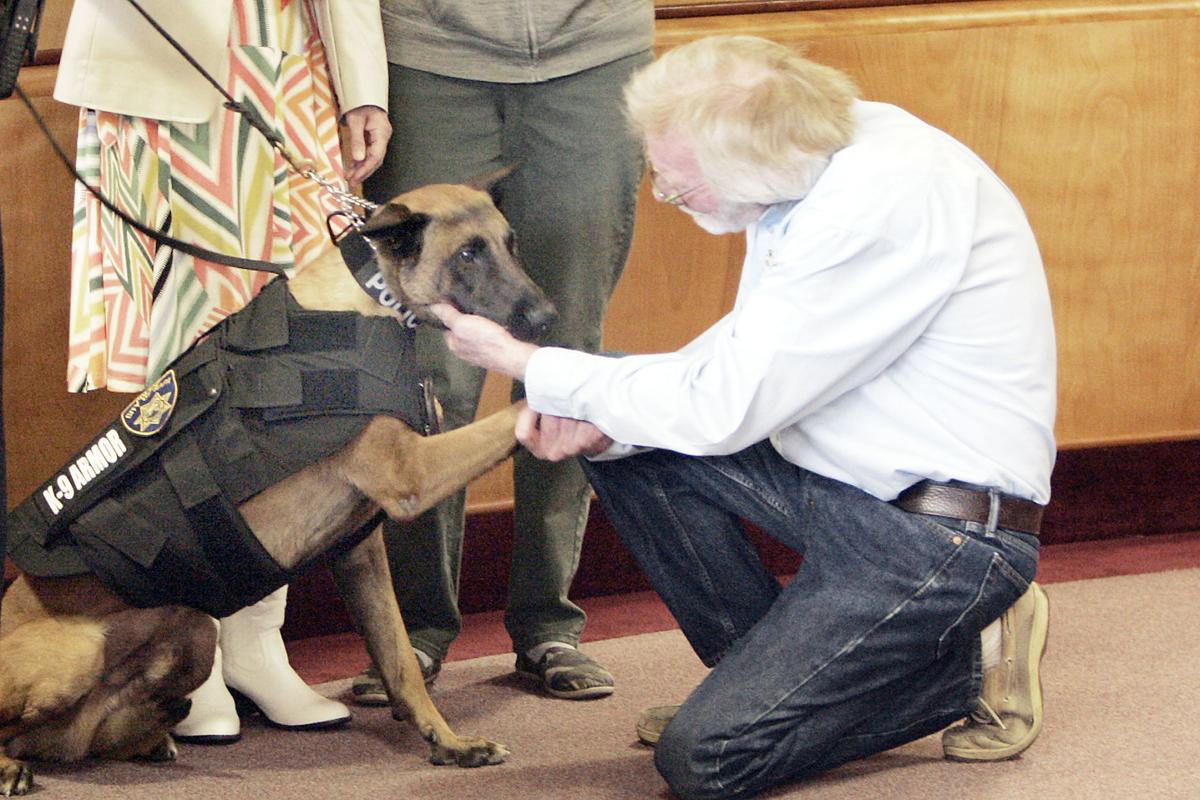 Thomas Hundley, owner of Spinnaker Electric in Napa, right, shakes hands with Rocky, the newest member of the Napa Police Department on Tuesday morning at Rocky's swearing-in ceremony. Hundley donated $900 for the purchase of a ballistic vest for Rocky.

The Napa Police Department’s new canine officer, an 80-pound Belgian Malinois named Rocky, was sworn in Tuesday morning and given a badge and a bullet-proof vest.

With help from his human partner, Brett Muratori, Rocky promised to uphold the United States and California constitutions. Rocky, who is originally from the Czech Republic, is trained to sniff out narcotics, suspects and missing persons.

“We put a ton of training and work into these dogs,” said Muratori, who learned several Czech commands to control Rocky. “[But] when he’s at home, he’s just like every other dog.”

Rocky, who lives with Muratori, has already assisted in several drug busts and five arrests since he started working with the police department in December, officials said.

Napa’s two canines both work four 10-hour days every week, and also do four hours of training once a week, up until they retire between the ages of eight and 10, according to Napa Lt. Debbie Peecook.

Police dogs, who always live with their human partners, are bred to be high-energy and to enjoy their work. They get paid in the form of food, treats and toys, Peecook said.

“They love it,” Peecook said. “They’re mostly very social dogs. They want to go out and find something to do.”

Rocky’s $900 bullet-proof vest was paid for by Tom and Sheri Hundley, who own an electrical contracting firm, Spinnaker Electric, in Napa.

While shooting and stabbing deaths of police dogs are rare, they do happen occasionally, Peecook said, mainly because the dogs are usually in front of the human officers.

While dogs and their training, housing, food and leashes are part of the police budget, bullet-proof vests are not. However, Peecook says that there are enough dog lovers locally that canine vests are often donated.

“We strive to find dogs that have a good personality, that fit with our community,” said Napa Police Chief Steve Potter. “The last thing in the world we want is to see one of our animals get injured.”

Gasoline in short supply for some in Southeast

Gasoline in short supply for some in Southeast

The vehicle left the roadway, colliding with a tree, then a fence, the CHP said.

An American Canyon resident convicted on multiple domestic violence counts has been sentenced to 22 years and four months in state prison.

Napa Police Lt. Debbie Peecook, left, gets the pawprint of Rocky, a K-9 officer that was sworn in on Tuesday morning at City Hall. Rocky is the department's second K-9 officer and joins partner Brett Muratori, seen assisting.

Thomas Hundley, owner of Spinnaker Electric in Napa, right, shakes hands with Rocky, the newest member of the Napa Police Department on Tuesday morning at Rocky's swearing-in ceremony. Hundley donated $900 for the purchase of a ballistic vest for Rocky.