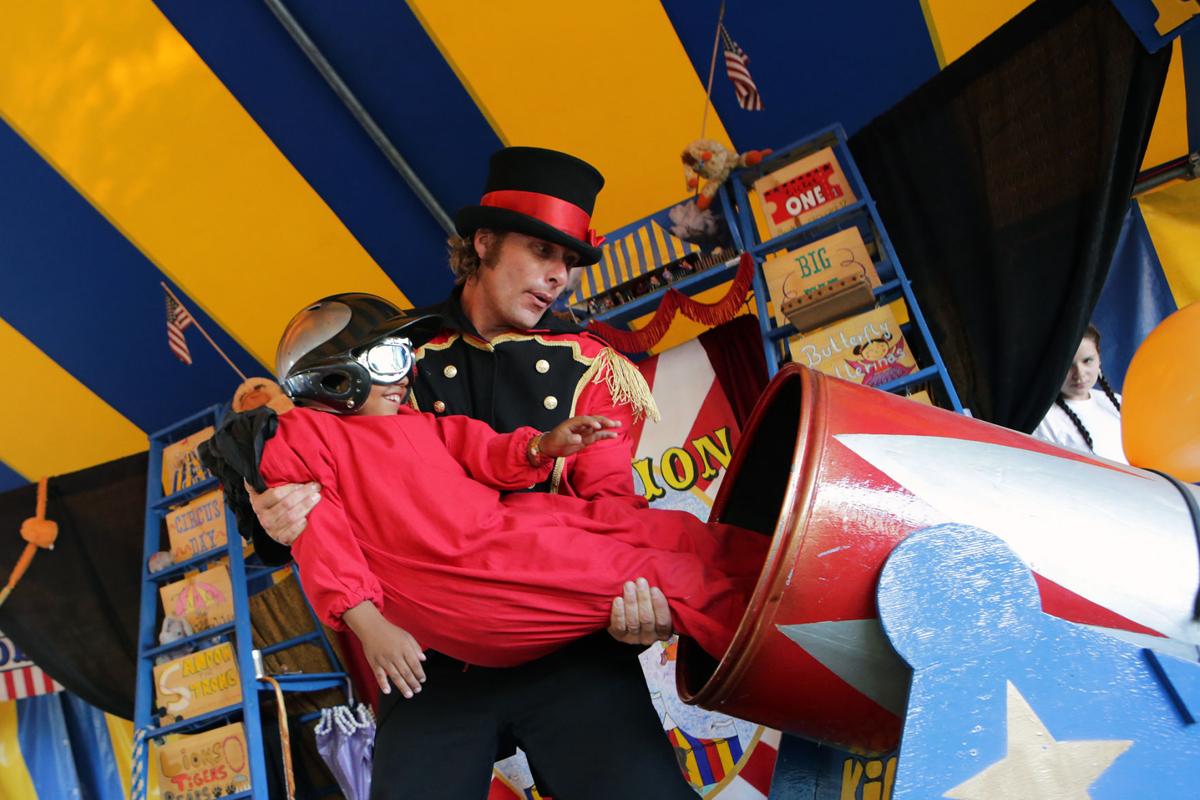 Caton Raintree-Hegwer, hosting Circus Imagination at the Napa Town & Country Fair, eases a young volunteer playing the role of Marco the Human Cannonball into a stage cannon during a Sunday performance at the Napa Valley Expo. 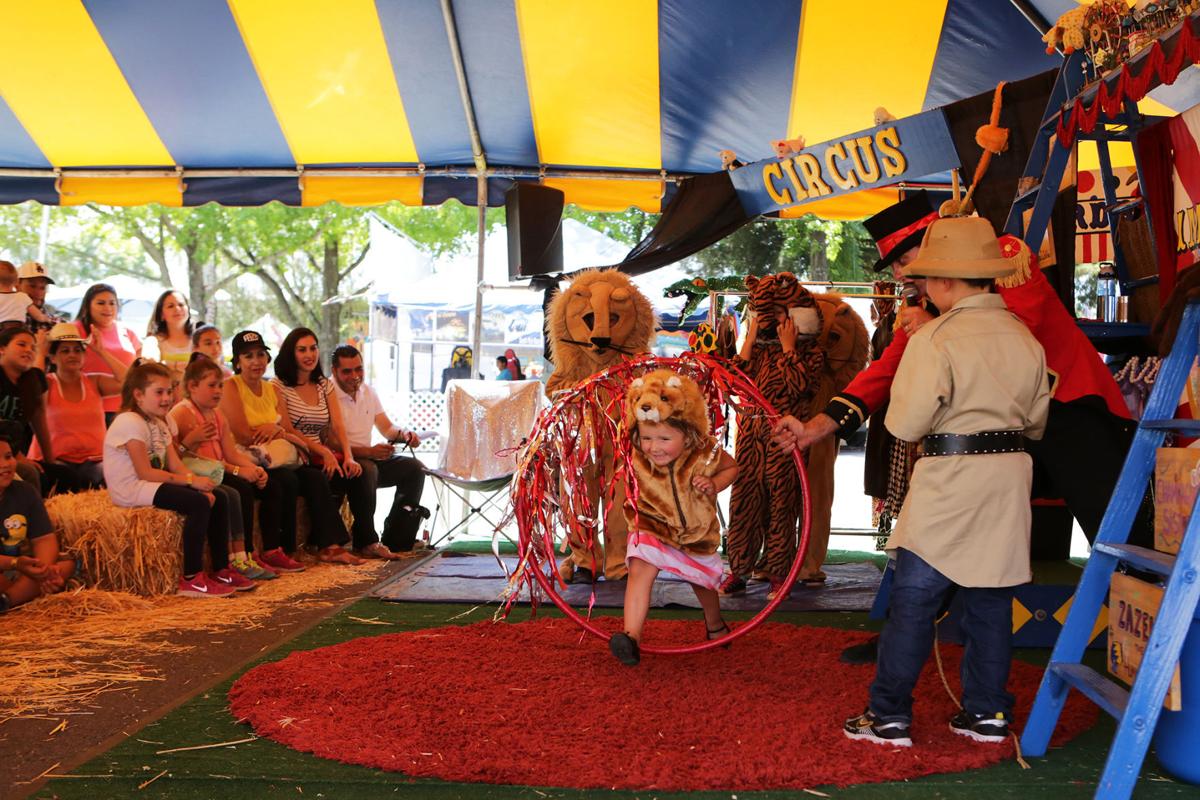 A girl picked from the audience to act out a tiger's role jumps through a "ring of fire" Sunday during Circus Imagination at the Napa Town & Country Fair. The participatory attraction has toured county fairs throughout the western U.S. since 1984. 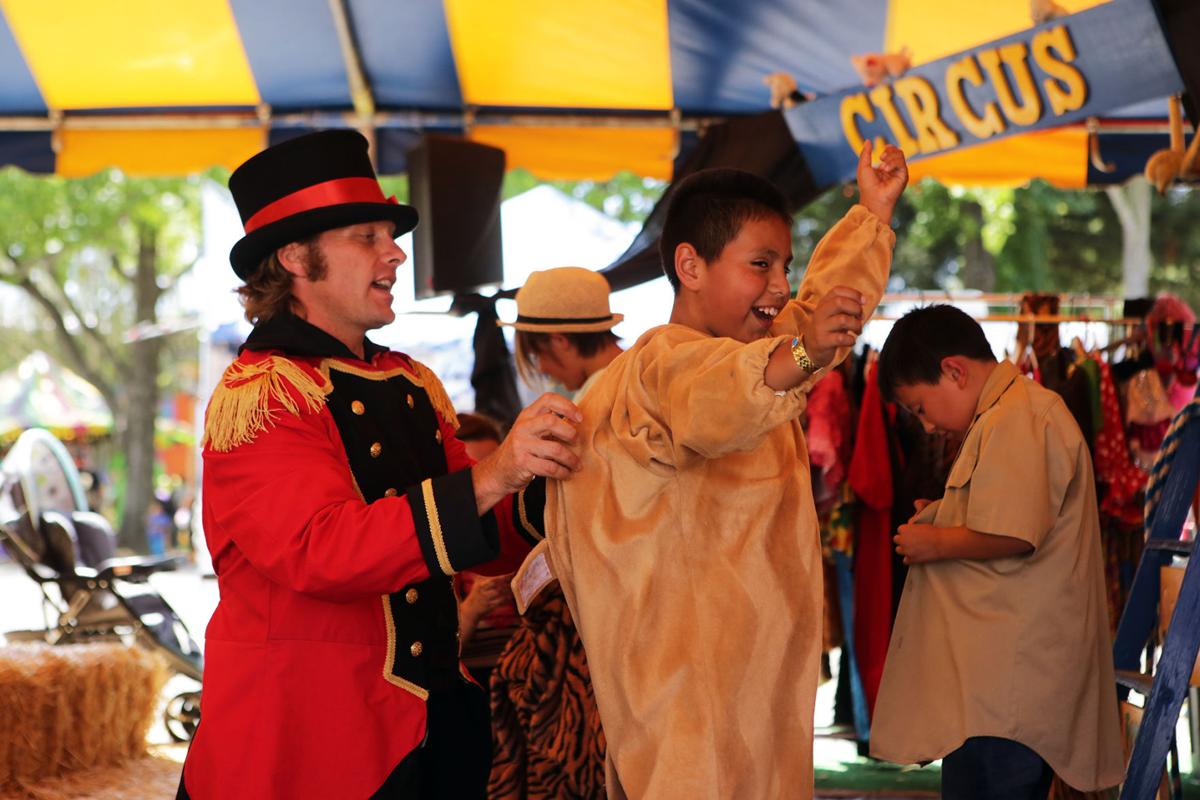 Caton Raintree-Hegwer (left), director of Circus Imagination, costumes a spectator as a lion before a performance Sunday at the Napa Town & Country Fair. The attraction created by Raintree-Hegwer more than 30 years ago invites children to play the parts of lions, tigers, acrobats and stunt people.

Caton Raintree-Hegwer, hosting Circus Imagination at the Napa Town & Country Fair, eases a young volunteer playing the role of Marco the Human Cannonball into a stage cannon during a Sunday performance at the Napa Valley Expo.

A girl picked from the audience to act out a tiger's role jumps through a "ring of fire" Sunday during Circus Imagination at the Napa Town & Country Fair. The participatory attraction has toured county fairs throughout the western U.S. since 1984.

Caton Raintree-Hegwer (left), director of Circus Imagination, costumes a spectator as a lion before a performance Sunday at the Napa Town & Country Fair. The attraction created by Raintree-Hegwer more than 30 years ago invites children to play the parts of lions, tigers, acrobats and stunt people.

When the Town & Country Fair came to Napa last week, so did a circus powered by the imagination of kids in the audience.

Under the not-so-big tent of Circus Imagination, spectators on hay bales could see lions, a lion tamer, tigers and the Champagne Sisters acrobats. Only instead of literal animals and death-defying performers, the circus master, Caton Raintree-Hegwer, called for little volunteers from the hay-bale bleachers to do more than watch the show – but rather to become, with costumes and make-believe, Tina the Tightrope Walker, Sandow the Strong, Deadeye McBang.

“We’ll stick a brave dude – or lady – and blast ‘em away before your very own eyes!” Raintree-Hegwer, dressed in a red topcoat and black top hat, shouted in a super-caffeinated patter mixing carnival barker with boxing ring announcer – and sounding much like the boy that Raintree-Hegwer, 36, confesses to still be at heart, nearly 15 years after taking over the traveling attraction from his father.

“When I pick up the microphone,

I’m 10 years old again, playing make-believe with my friends,” said Raintree-Hegwer, who leads up to 300 performances a year in the Western states with his wife, Carolina. “It’s not a job so much as it is a lifestyle.”

In minutes, a set of hand-sewn, sequined costumes turned Melanie Garcia and Yairette Deloera into the Champagne Sisters, acrobat siblings flown in from Paris. Furry suits transformed Devon Hogg and Ruben Garcia into lions and Lilly Boyce into a tiger – and Chris Hernandez became their master, Marco the Lion Tamer, with help from a khaki safari outfit and hat.

Melanie and Yairette – or rather, the Champagne Sisters – approached a shin-high wooden seesaw with a stuffed monkey at one end and a plastic basket a foot away. But the girls’ butterfly-patterned dresses and the circus leader’s arena-size voice would, for a minute, turn the toy-like props into a death-cheating stunt sending a real monkey hundreds of feet in the air.

“Not don’t jump early, or I get a monkey in my face!” Raintree-Hegwer mock-admonished one Champagne Sister before the stunt. With a little hop by Melanie on the seesaw board, the furry primate scored a direct hit in the basket.

If the children chosen to be half-hour circus stars were shy at first, some soon became comfortable in their new characters.

“I thought they would laugh at first — thought people would laugh at me, but they didn’t,” said Andrew Todd, still sporting a bushy fake beard and muscle suit from his turn as half of the Hans and Franz strongman team during the third and final show Sunday.

“First I was nervous, like, what do they think of me getting in that costume and standing there and acting like I was from France?” said Margaret Carmichael. “But then I was laughing so hard, I couldn’t even talk!”

Inspiring educational play and expanding the mind’s eye of children has been the goal of Circus Imagination since Raintree-Hegwer’s parents, Greg and Criss, began the show in 1984. After they retired from the program in the late 1990s, their son, Caton, revived it in 2001 shortly after graduating college.

He and Carolina, who are based in Garden Valley in El Dorado County, bring their costumes, props and blue-and-yellow tent to fairs as distant as Hawaii, Washington state and Utah – and to the Napa fair for three performances on each of its five days.

“The amount of energy we put out to keep up with 30 sugar-hyped kids takes a lot of us, but when you you were a kid, you never thought about how much energy you were using,” he said before Sunday’s first performance. “You were in the moment. You just had fun.

“What gets me is seeing parents who say, ‘Oh my kids are too shy for this!’ And then they perform excellently, and we’ve opened away to a range of creativity for them.”

Circus Imagination’s opening show on Sunday reached its climax with the hazardous-sounding Ring of Fire. One by one, the play-acting lions and tigers took their jumps – through a Hula-Hoop strung with flame-red streamers – amid a final round of applause from their parents.

As the show wound down, the circus master asked one favor of the departing children — that they let their creativity and playfulness flow, rather than go dormant in front of a screen.

Photos: Farewell to the fair

Check out highlights from the 2015 Napa Town & Country Fair.