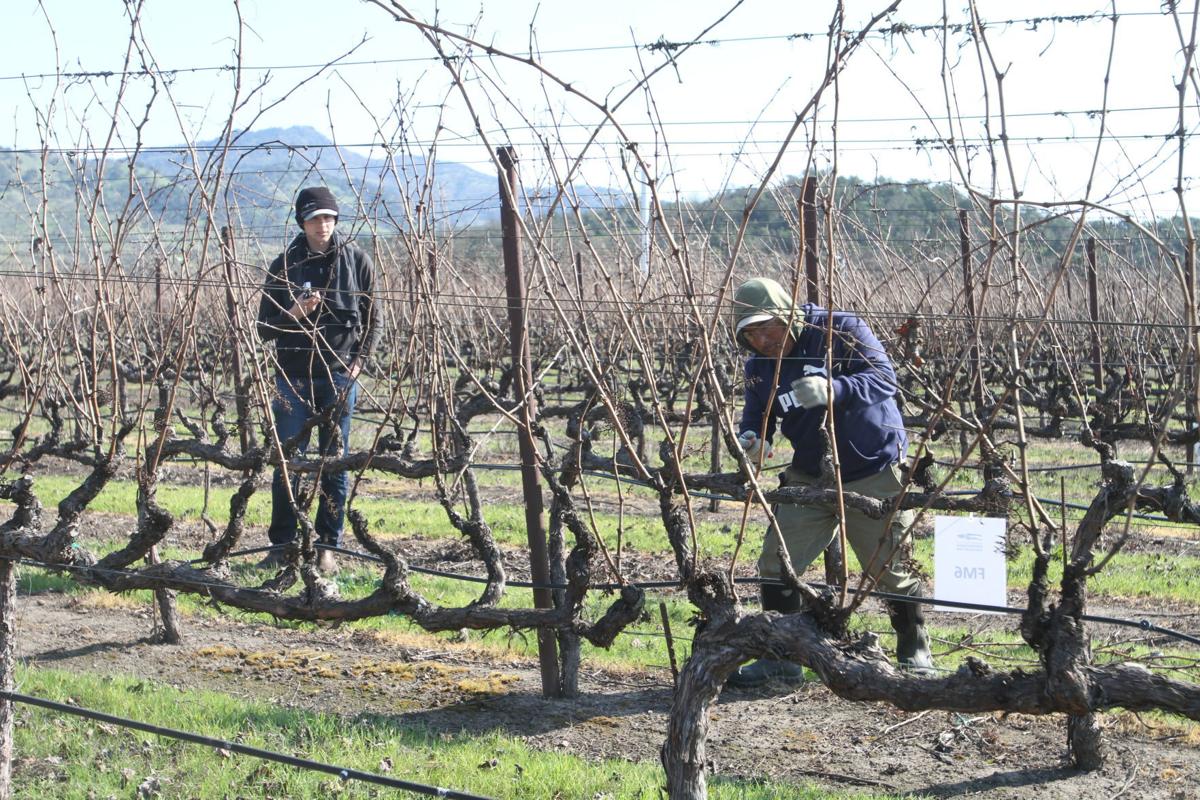 A timer looks on while a contestant prunes vines at the 19th annual pruning competition on Saturday. Competitors work to balance both speed and precision in the hopes of winning one of the grand prizes, which include a check and a gift basket. 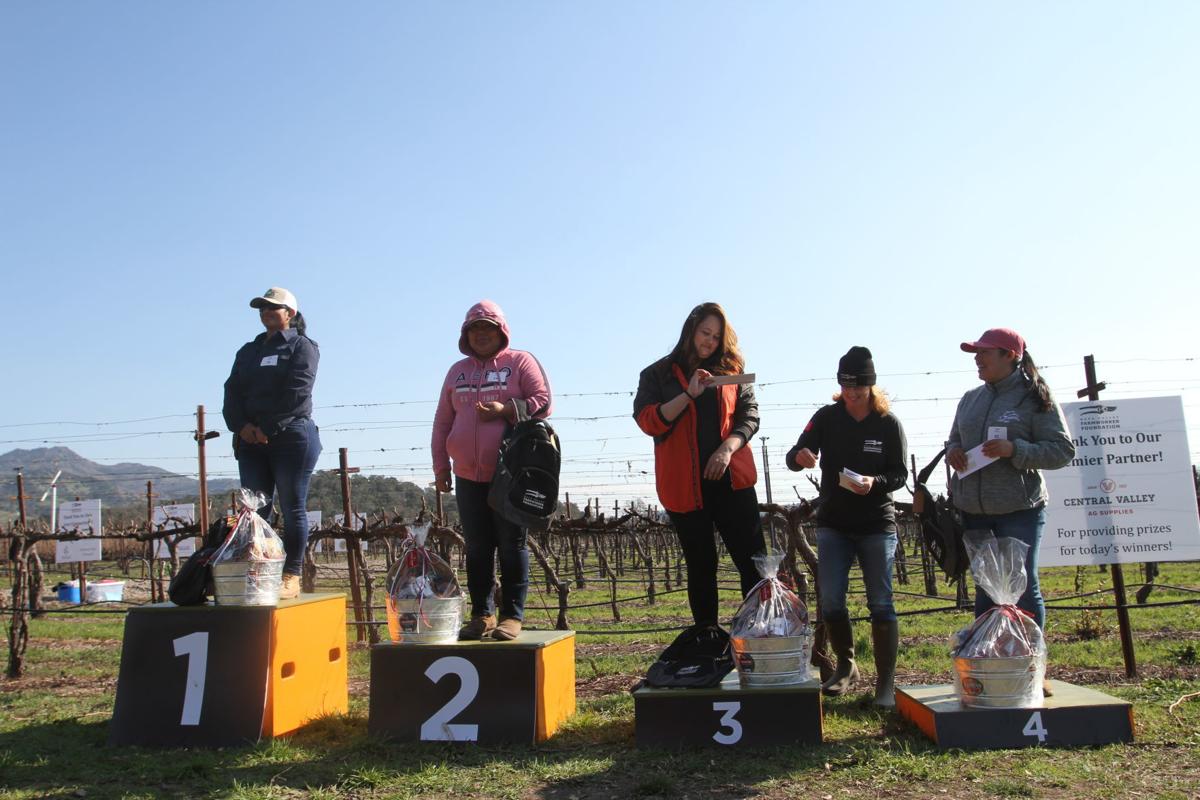 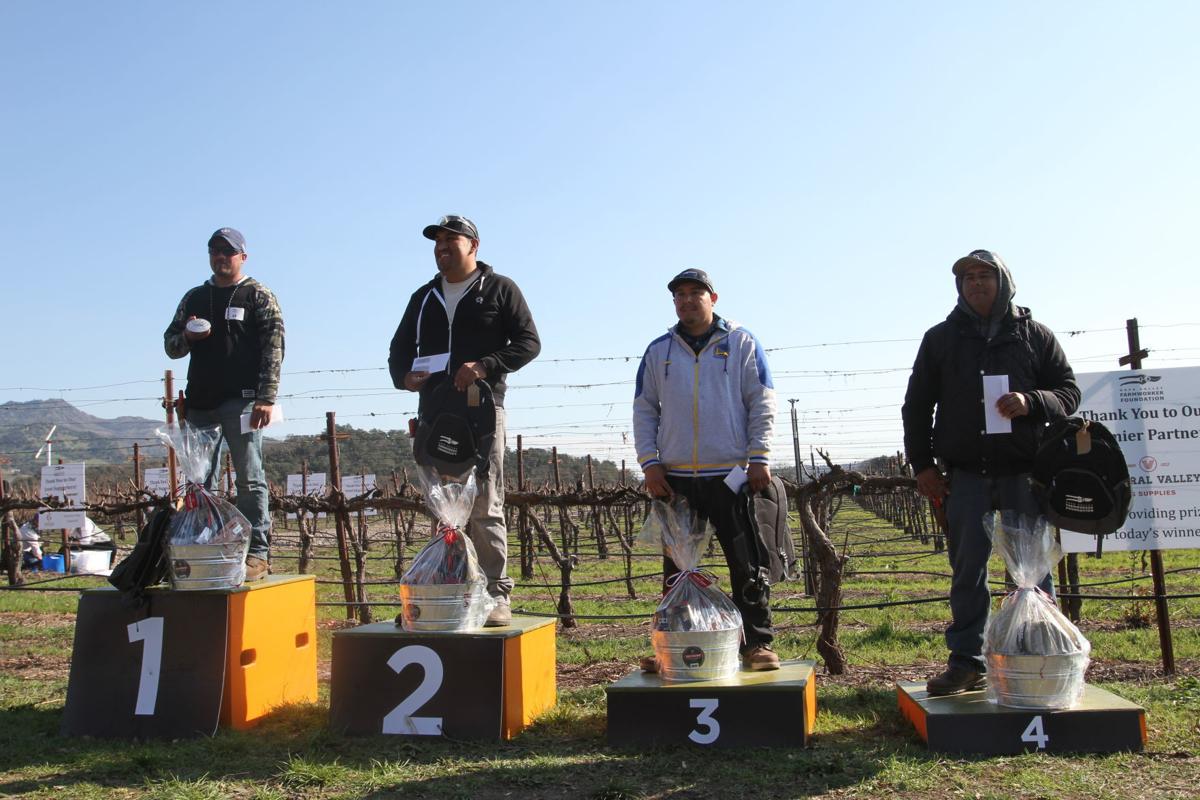 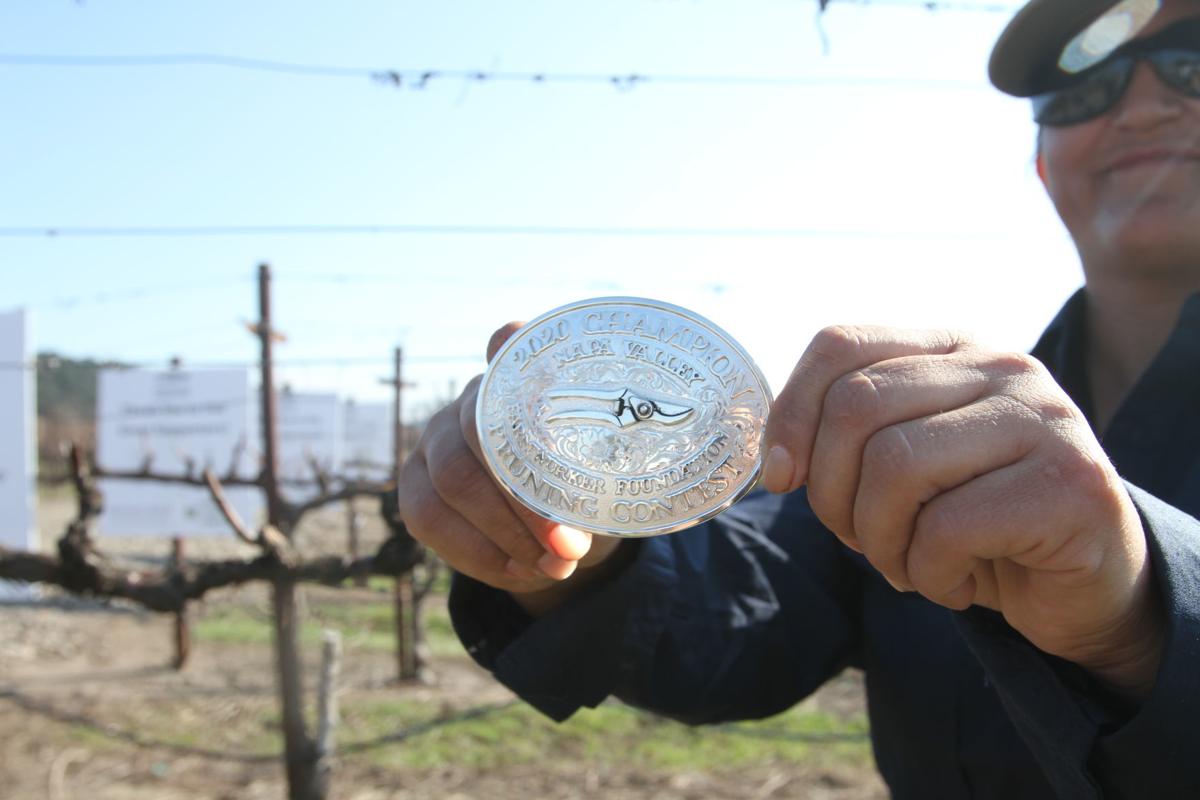 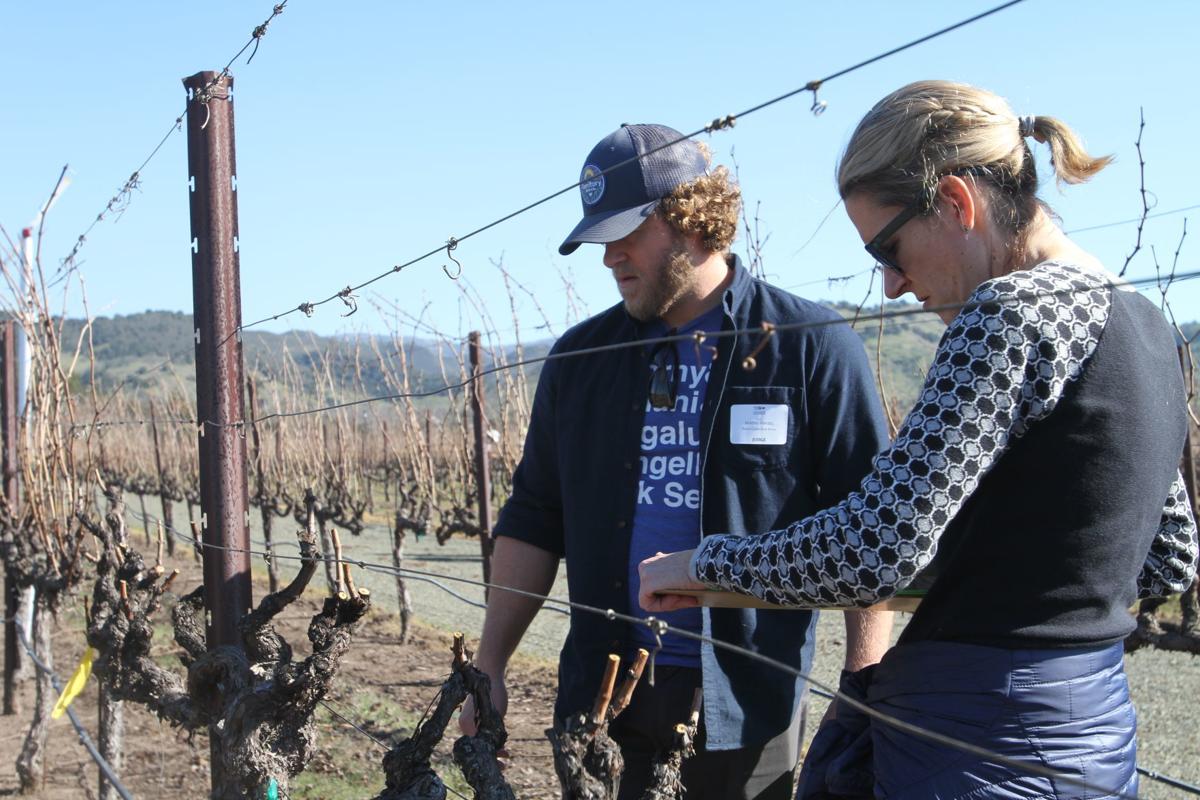 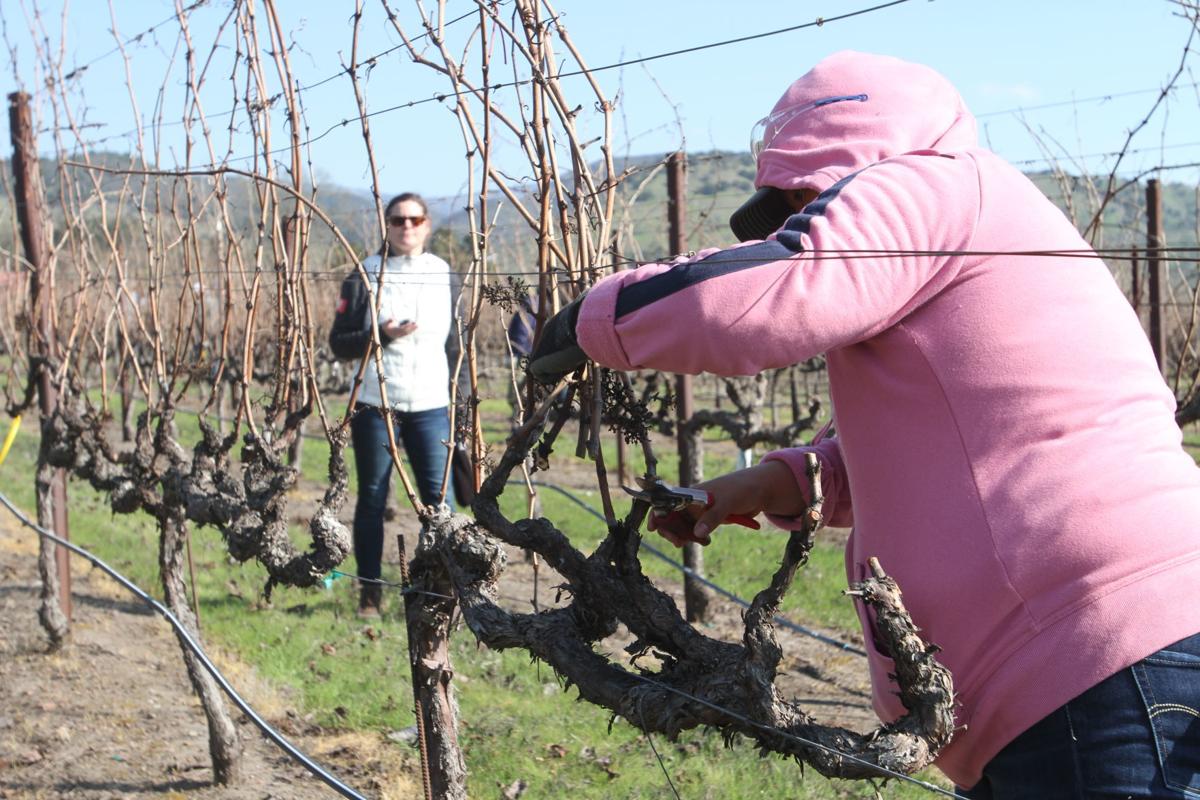 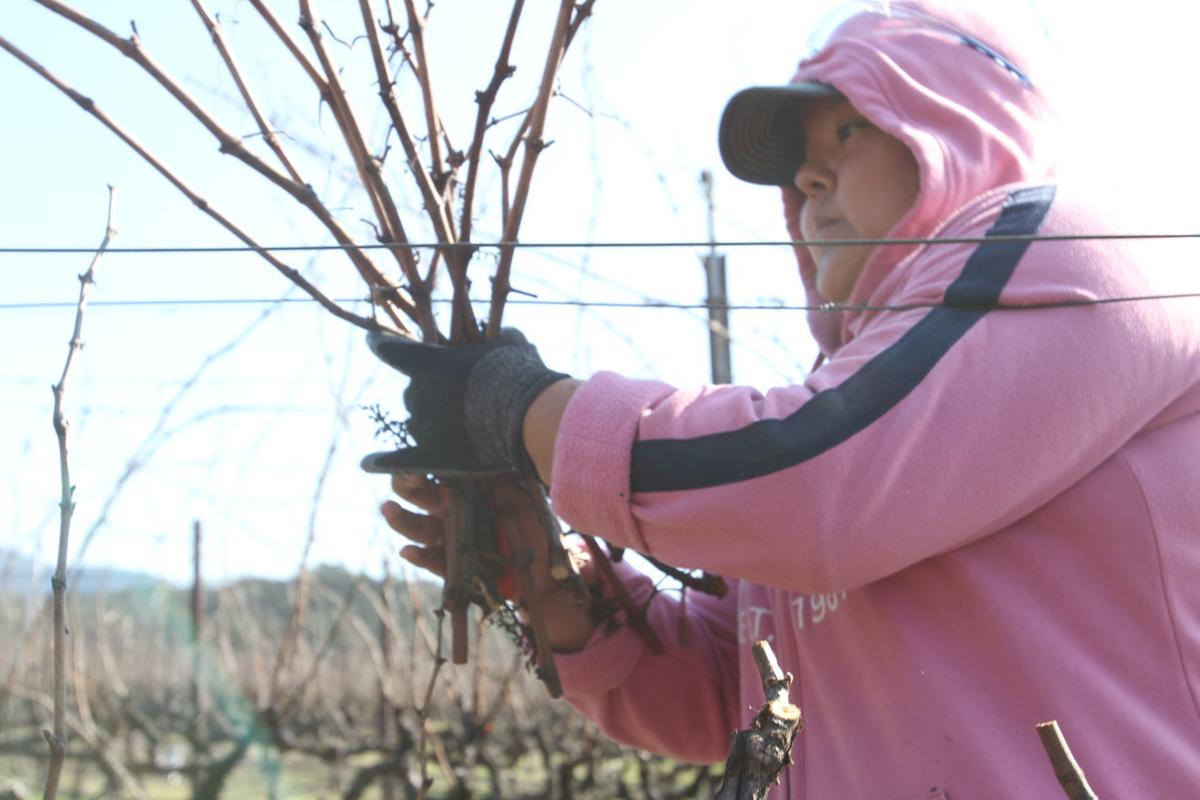 Contestants positioned themselves deftly in their places. They willed themselves to concentrate, breathed deeply, and gripped their equipment. And then, given the signal, they began to prune.

One hundred and sixty contestants competed Saturday in Napa County’s 19th annual pruning contest, hosted by the Napa Valley Grapegrowers and the Napa Valley Farmworker Foundation. Though pruning season is quieter this time of year than, say, harvest – it’s one to which notably less headlines are devoted, anyway – it’s just as critical a time, according to Bertus Van Zyl, one of a cohort of judges scoring contestants on Saturday.

It’s a nuanced skill, he added—and it’s not a job that just anyone can be placed in.

“As a pruner, you’ve got to make a decision about some of the positions of the cuts on the vines, and how you’re making them,” said Van Zyl, head winemaker for Farm Collective. “It can really impact a vintage.”

And not just one vintage, added Molly Hodgins, a professor at Napa Valley College who was working alongside Van Zyl to score pruning jobs. Poorly done pruning can impact vintages for “years to come,” she said.

As they worked their way through the rows of vines planted at Beringer Vineyard’s Gamble Ranch, the vineyard where the competition has been held since its inception, the two judges carefully examined each cut made by respective contestants. Each contestant is given five vines to trim, explained Hodgins, and are ultimately judged both on their precision and decision-making skills as well as the speed at which they work.

Van Zyl pointed to a water shoot left on a vine – something that should have been removed, he said while Hodgins docked a point from a contestant who had pruned a vine but not removed the debris from the row.

“At this level, everybody’s so good – you can’t be shy about what you’re docking points for,” Hodgins said. Contestants are scored out of 100; the highest scores usually range around 90 points, she said. That’s got to do with the time pressure contestants are under, Hodgins added.

Pruning work begins following the end of harvest. Movement in the vineyards, stripped of their crop, usually picks up again in January – the work can last through mid-spring. It’s tedious, labor intensive work – but participants showed no sign of weariness on Saturday. They congregated on the lawn in front of the vineyard, gathering in groups to discuss the proceedings and enjoying the day. Some had brought along spouses and children. Others, like Maricruz Gutierrez, stood in wait with their colleagues, anxious to hear the day’s results.

This year’s was Gutierrez’s fourth time competing in the pruning contest, she said. There had been talk of adding a women’s contest for almost a decade before it came to fruition in 2016, according Napa Valley Grapegrower Executive Director Jennifer Putnam.

“We thought we were going to have to call around to people, and say, please send two of your female workers,” she said. “But the first year we had 16, and we were blown away.”

It’s a reflection of an industry that has become increasingly populated by female workers, she said. Vineyard management companies, like Silverado Farming and Renteria Vineyard Management, now work with crews comprised of something like 30 percent women, Putnam added.

Gutierrez placed third in her first year competing; she’s worked in vineyards for almost fifteen years, drawn to working in the open air. Asked if she was hopeful she’d place again this year, she laughed.

“Yes, of course,” she said, in Spanish. “My favorite part of the day is when they announce the results. But it’s everything about the day – the ability to come together and be with everyone.”

Ultimately, eight male and eight female finalists are chosen to compete against each other for fourth through first place. Each place is accompanied by prizes; winners are awarded gift baskets as well as checks worth several hundred dollars, Putnam said.

Finalists, once announced, immersed themselves carefully among the jungle of shoots and vines. At the announcer’s mark, they began pruning the vines quickly, purposefully making clean cuts and removing the shoots, which grow vertically out of the vines. It was a flurry of movement, and then it was done.

Finalist Idilberta Merino, who works for Walsh Vineyards Management, was visibly nervous after her last pruning; she paced the vineyards, her face made almost solemn by the anticipation. She’d brought along her son and her husband, who stood by her side as she waited. She wasn’t alone in her concentration; finalist Cecilia Avina walked out of the vines visibly out of breath as she stood to wait for the results. It takes tremendous focus, she said.

“I don’t think while I’m pruning – I just know that I have to cut and cut and cut,” Avina said in Spanish.

Avina said she’d learned to prune from a roster of mentors who had helped her perfect her craft along the way. Though there are specialized pruning courses available for vineyard workers, they tend to be in English, Van Zyl said. Though many do at least have an understanding of English, the vineyard worker population is predominantly Spanish speaking, he said, and so often workers are taught by the bilingual foremen of their crews or their Spanish-speaking peers.

De La Cruz, who said she’d been doing vineyard work for five years, said she was elated to have placed first. She’d use the check to pay her bills, she said, as she fingered the specially-made belt buckle awarded to first-place winners.

“I’d previously worked in the restaurant industry, but I came to field work because I felt like working outside agreed with me,” De La Cruz, who commutes from Woodland to Napa County every day, said in Spanish. “I thought I wasn’t going to like it, but I love it – and here I am.”

Despite overcast skies, 153 contestants came out to show their skills in the 18th annual Napa County Pruning Contest at Beringer’s Gamble Ranc…

It was shortly after the crack of dawn last Friday when 16 St. Helena High School viticulture students harvested grapes from 100-year-old Zinf…

Early pioneers established some of the finest vineyards in the Napa Valley more than 150 years ago. George Calvert Yount was first credited wi…

A timer looks on while a contestant prunes vines at the 19th annual pruning competition on Saturday. Competitors work to balance both speed and precision in the hopes of winning one of the grand prizes, which include a check and a gift basket.