Behind the barrel: Meet the Master Coopers of Napa’s Seguin Moreau
Share this
{{featured_button_text}}
1 of 2 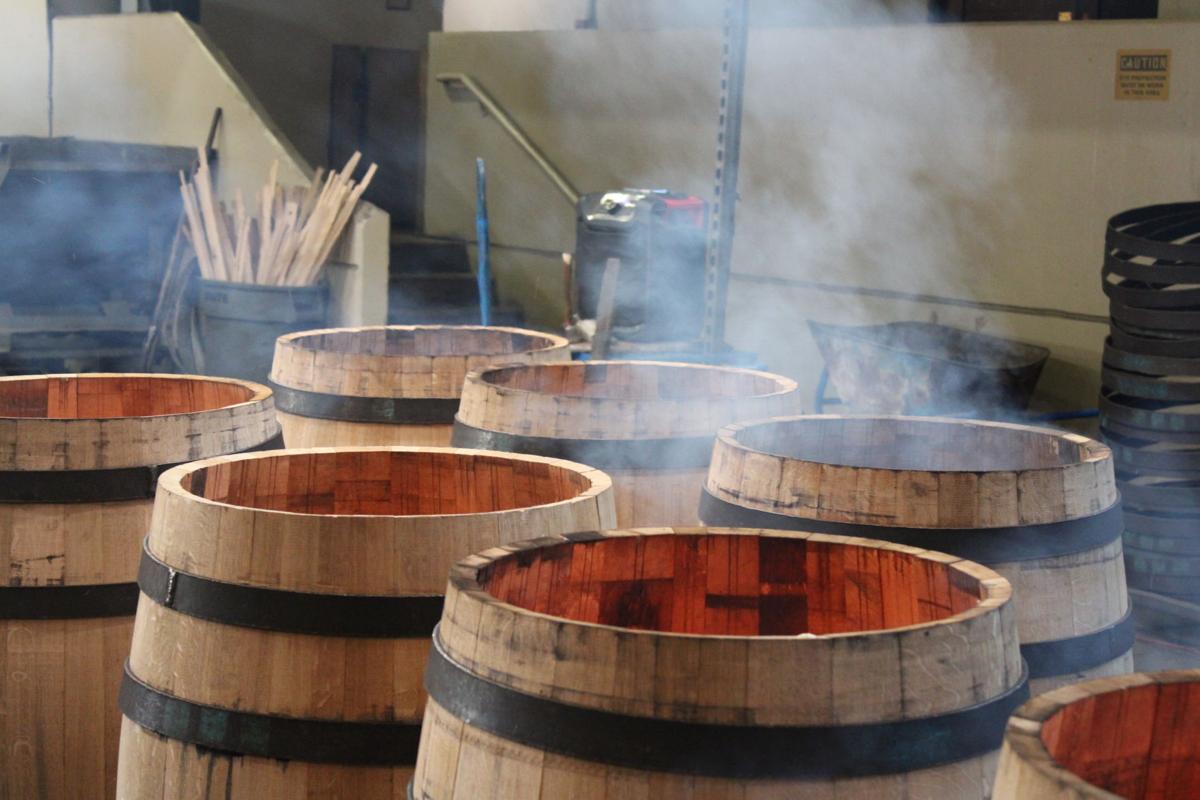 Once you step onto the grounds of Seguin Moreau in Napa, you can instantly smell the campfire-y scent coming from this barrel room. 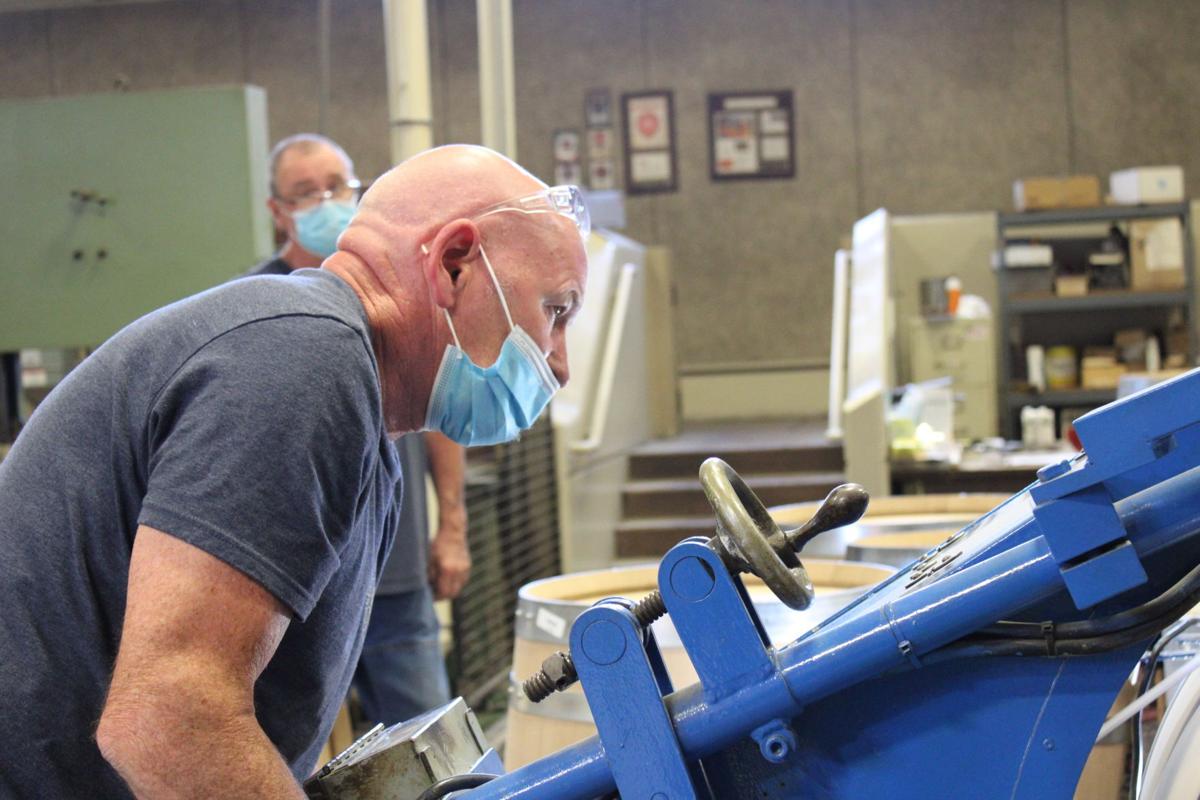 Even as a Master Cooper, Douglas Rennie is hands-on and working hard during his days at Seguin Moreau.

When Douglas Rennie and Andy Byars first started learning the art of coopering as young men in Scotland, everyone around them thought it was a terrible mistake.

There was no machinery or electricity involved in much of the barrel-making process, requiring hard, physical labor to pound out the metal bands, prepare the staves, and assemble the vessel, making for a difficult job in an industry many didn’t see the value in.

The two didn’t know each other, despite the fact they both began the trade in the 1970s Glasgow, but would eventually grow to be great friends and loyal colleagues here in the United States.

For Rennie and Byars, being a Scottish cooper meant leaving school at 16 to work with whiskey barrels, launching the young men into a four-year apprenticeship training program below some intriguing — and knowledgeable — mentors. Learning as much as they could from the artisans before them, both men eventually rose to the title of “Master Cooper,” meaning they have mastered every stage of making a barrel. If one of their fellow employees was absent, for example, either could jump into any given part of production and pass with flying colors.

But the whiskey barrels they worked with pale in comparison to those used for wine, which the duo hadn’t worked with up until about the '90s.

“When we came here, we had never seen barrels like it,” said Rennie. “They were all sanded, with wooden hoops ... They were beautiful. We had only ever worked with whiskey barrels that would go away for four to seven years, they would come back, we would change a couple of staves, and then send them away again.”

After overstaying his visa on a trip to visit his brother in 1991, Rennie never went back to life in Scotland, relying on the local library’s trusty Yellow Pages to find him a job at a cooperage in a place he had only (and barely) ever heard about.

At the time, Seguin Moreau only had a workshop for repairing brandy barrels in Napa Valley — no actual cooperage — but the French headquartered company was gearing up for an increase in American sales due to the boom of local wine. Byars came to the U.S. shortly after Rennie in 1993, and the two helped build the state-side cooperage from the ground up.

“For them, they said it was perfect timing,” said Rennie. “They told us about the plans to build the place here, so they sponsored me to get my green card and they sent us to France for 5 months in Cognac to work with them before we opened the cooperage here.”

The men light up when they talk about the education they were provided by Seguin Moreau, speaking to the detail-oriented manner of building barrels by hand.

“We said if we ever make them in Napa, we will do every single detail and we will never change,” said Byars. “They might not know at the winery, but we think that if we stop doing it, then we lose that part of coopering and it won’t come back.”

There is no way to tell how many Master Coopers still exist today, but both men say that while it is becoming more and more difficult finding young folks interested in learning the trade, the staff they do have are extraordinarily knowledgeable and loyal. Many of them have been with Seguin Moreau for 10-plus years, and the group also recently hired their first female cooper, which remains a novelty in the industry.

“To make a barrel by hand, it would take you a full day,” explained Rennie. “But now because of how we are set up, we have an assembly line and we are constantly moving. Someone is heating, someone is bending, someone is toasting, so a barrel should come off in the toasting room every four minutes.”

In ramping up mechanization, Seguin Moreau now sells their barrels to thousands of wineries across the world and have grown from a few offerings to a menu listing of styles and alternatives. However, the coopers still need to be extremely hands-on in the process, regardless of how many machines may be in use, because of the fidgety nature of ensuring a barrel’s integrity.

While quality checks are done as soon as the wood arrives from France or their lumber partners that season the wood in Missouri, the coopers can’t tell if the staves will be stable enough until they are assembled in the barrel. Then, since the oak they use is so expensive, the coopers will repair individual faults or imperfections by hand instead of rejecting the entire vessel.

Similarly, the art of coopering is just that — an art — so consistency is key when it comes to providing luxury barrels they can be proud of sending out to consumers.

“What Douglas does is different from me, and I do it different from him, so we have a guy and he takes both of our knowledge and combines it,” said Byars. “We advise them, and usually nine times out of 10, people listen.”

Luckily for Seguin Moreau, though, Byars and Rennie didn’t listen when they were both told coopering was a, “dying trade,” over 40 years ago, and went against the grain to pursue this type of woodworking. They talk about the smells and sounds of a cooperage, the difference between an American and French oak — (the answer is the American one smells like bacon. Seriously.) — and the rest of the fanfare associated with making a beautiful barrel.

“People really don't know what we do, it's more of an education for them when they actually see it,” said Rennie. “It’s one of the oldest trades in the world, and we are still here and still doing it. Those of us who love coopering try to keep the little details, because it is really important for us to keep that part of coopering alive in 2021.”

Last year’s fires also threw Seguin Moreau a bit of a curveball, just not in the way one would think. Folks still ordered their barrels last year, but with fears of smoke taint, some chose not to fill them. The result? Fewer orders this year.

“A lot of customers had bought barrels, they took them, but they never used them. So this year is the hard part for us, because if they didn’t harvest, they still have the barrels,” said Rennie. “But we’ve always adapted when nobody wanted barrels anymore. Even to this modern day, we started making bourbon because of all of this smoke taint on grapes.”

From storing drinking water on Mayflower-ian voyages across the sea to hoarding gunpowder to fermenting Napa’s version of liquid gold, barrels have a long history, and with guys like Rennie and Byars around, they won’t let you forget it.

“We are still changing, and always learning how to survive.”

US surgeons successfully attach pig kidney to a human

While considered by most an unwinnable quest, the battle against cork taint has been waged aggressively for the last several decades.

Editor’s note: First of a two-part series. “The cooper’s work was not a minor thing in daily life. Wines, liquors, ciders, and beers were all …

Look at me now! Former cooperage and chicken ranch now a luxury estate for sale for $5.2 million

A former chicken ranch, then cooperage, has been remodeled into a luxury St. Helena estate, one that could be yours for $5.195 million.

In a high-tech world, aged spirits still get much of their flavor from wood and fire

Carried to this distillery by a hybrid vehicle, having mapped my way here via satellite technology, and holding a device on which I can access…

Celebrate Friends of the Libraries week

Letters: As a kickoff event, we will be hosting a free children's book giveaway on Oct. 17.

Once you step onto the grounds of Seguin Moreau in Napa, you can instantly smell the campfire-y scent coming from this barrel room.

Even as a Master Cooper, Douglas Rennie is hands-on and working hard during his days at Seguin Moreau.