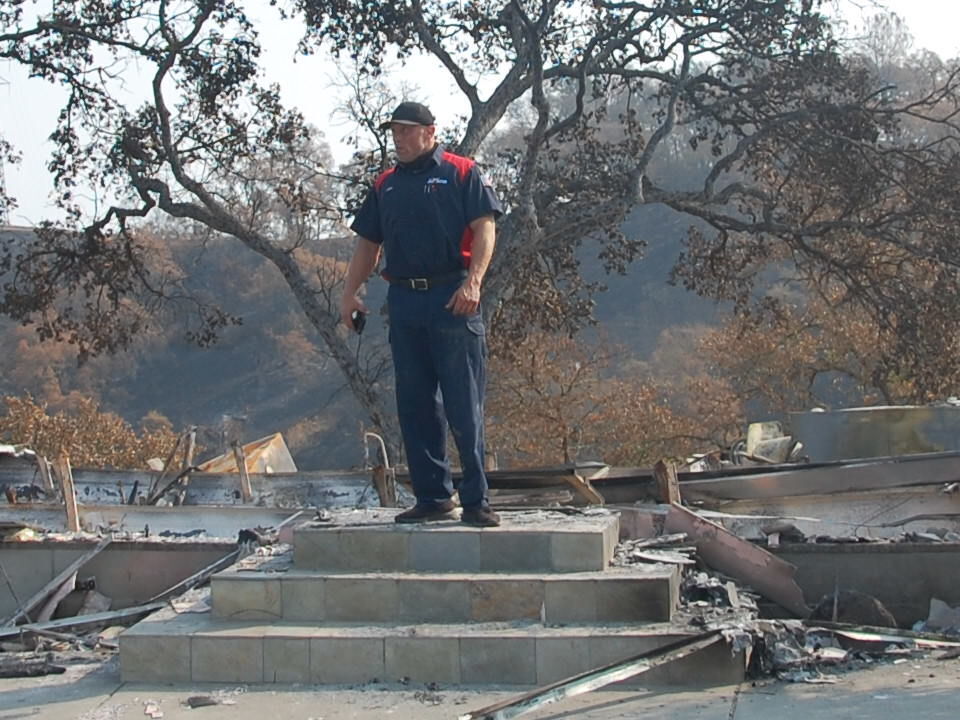 John Bentz of The Duct Doctor looked at the wreckage of Berryessa Highlands homes on a recent day. He is removing ash from homes that survived. 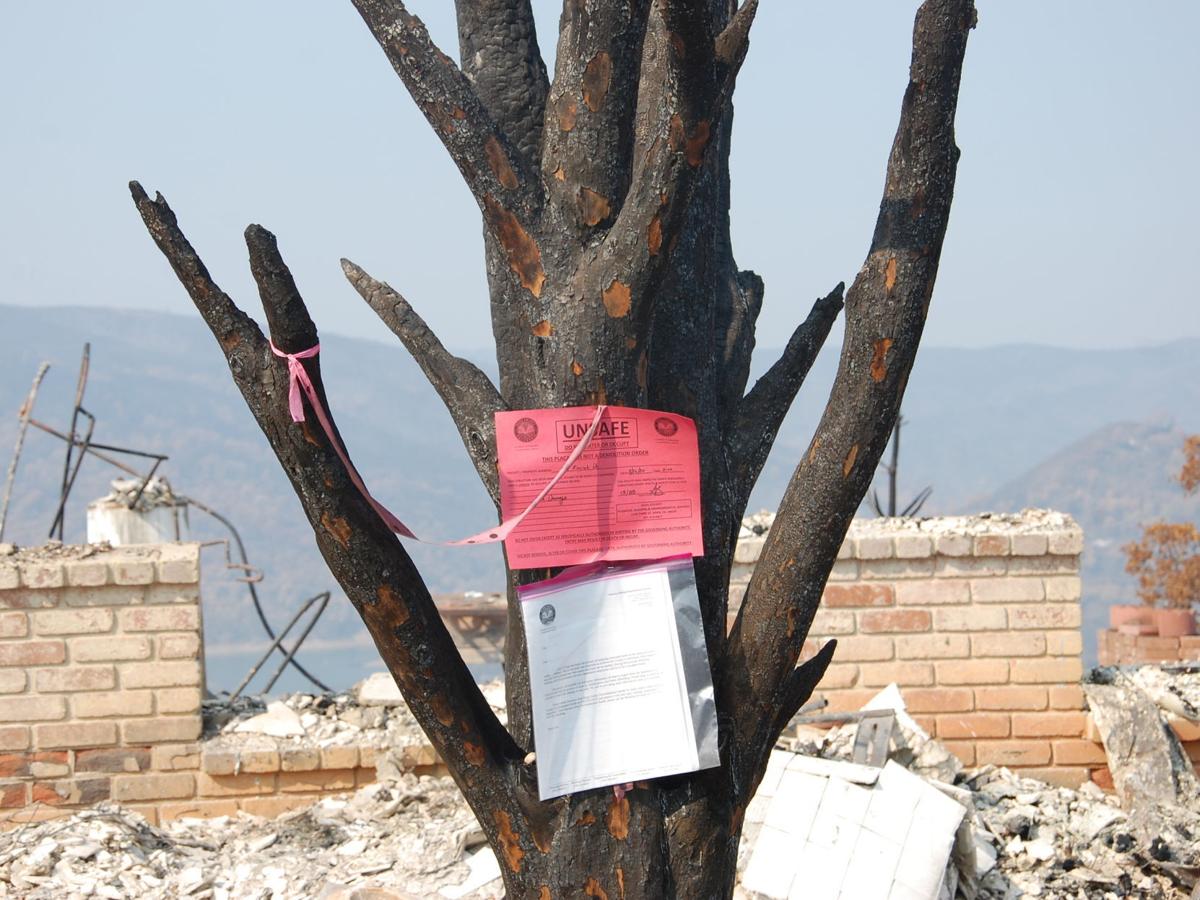 A Napa County notice proclaims the wreckage of a Berryessa Highlands home as being unsafe. 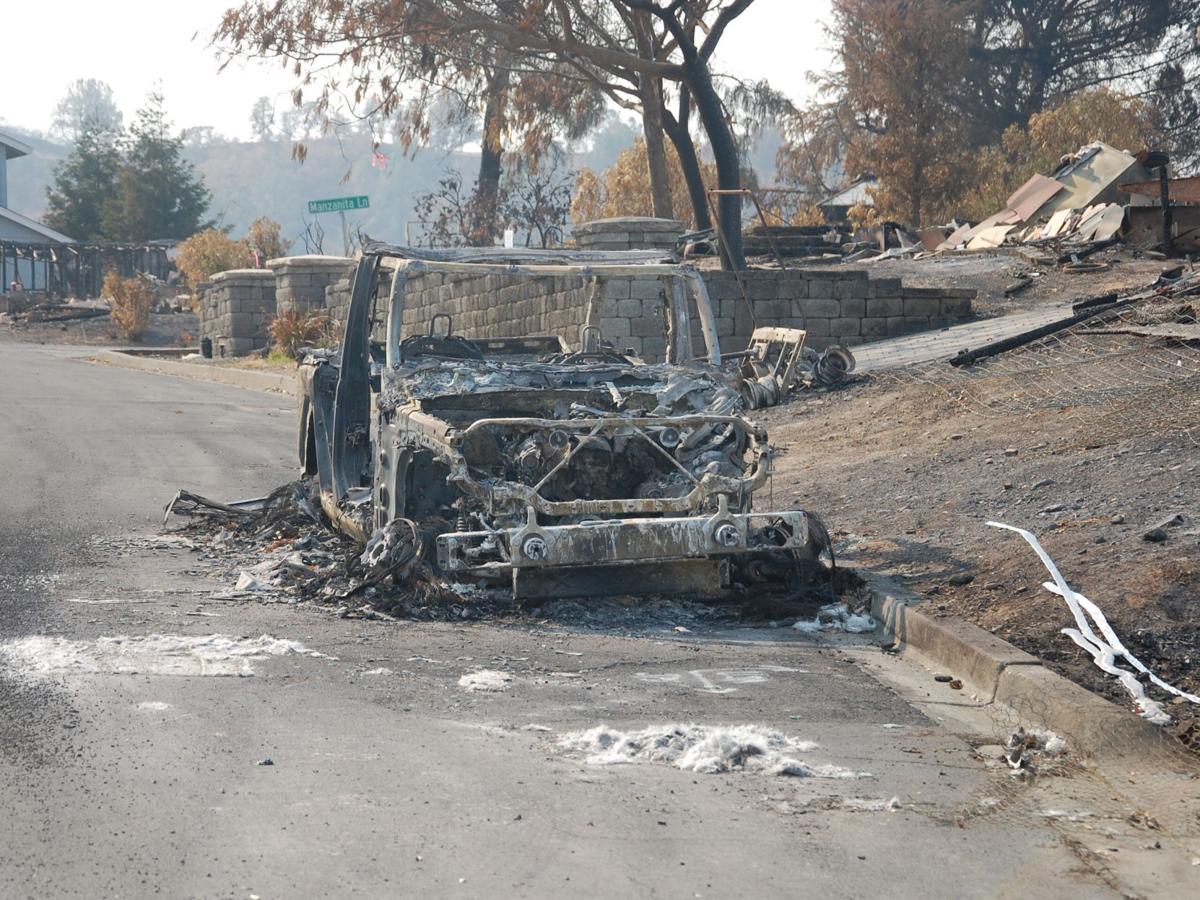 The remains of a car burned when the Hennessey fire swept through Berryessa Highlands on Aug. 19. 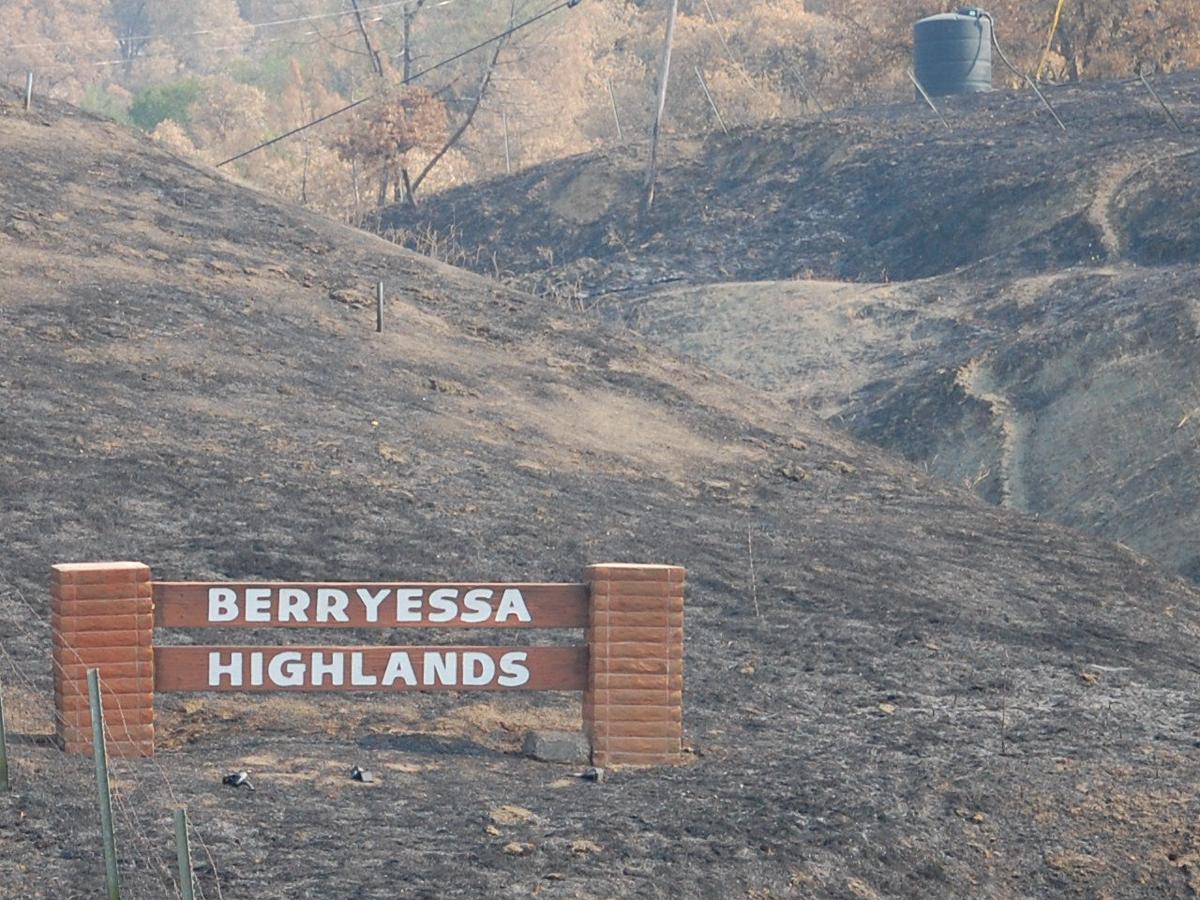 The entrance to Berryessa Highlands was blackened by the Hennessey fire, though the sign survived. The fire destroyed about 93 homes in the rural community near Lake Berryessa. 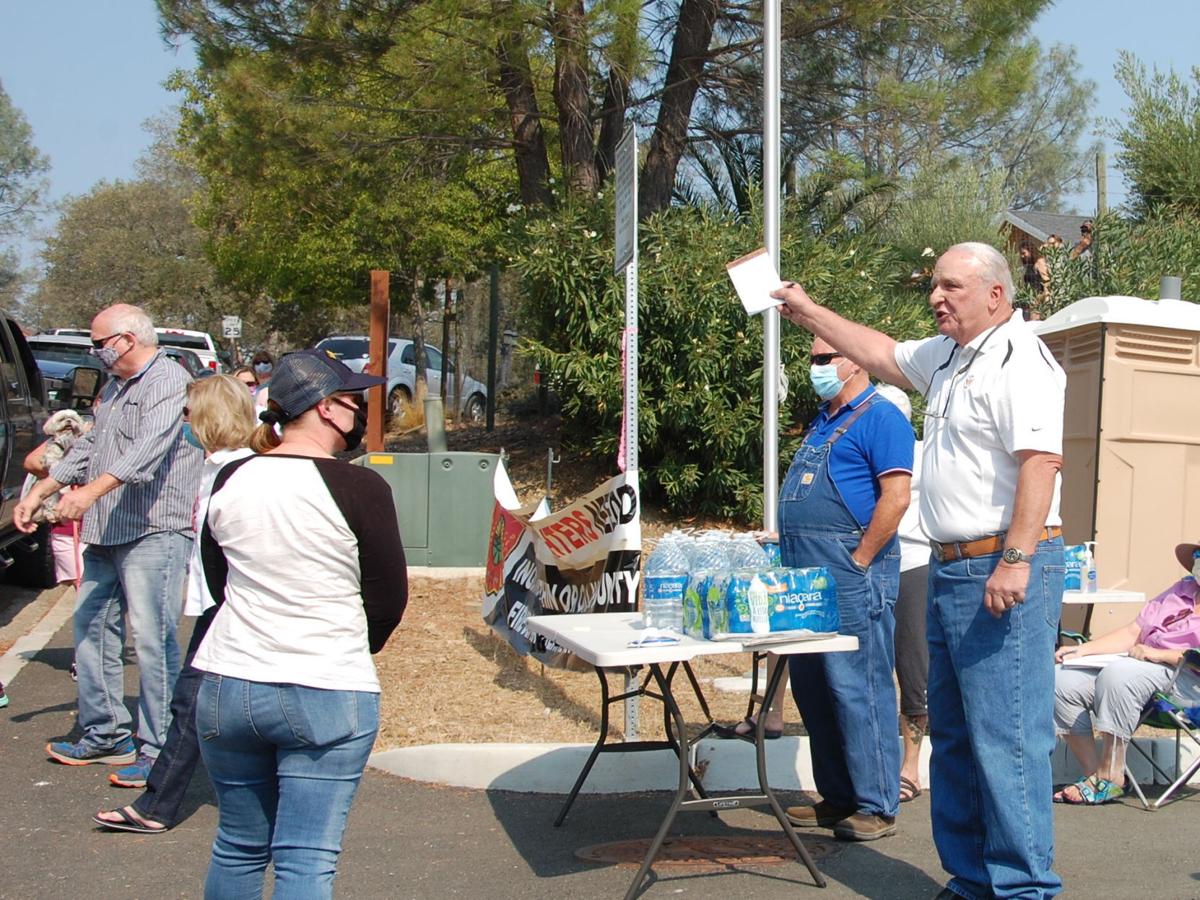 Stu Williams and his son were watering down the roof of their Berryessa Highlands home with a fire hose as the Hennessey Fire bore down when the water flow from the hydrant stopped.

His house still stands. The Hennessey Fire that burned about 93 Berryessa Highlands homes on Aug. 19 on its way to becoming the largest wildfire in Napa County’s recorded history spared him.

“No thanks to the fire hydrant,” said Williams, who has lived in the Highlands for 16 years.

Several dozen Berryessa Highlands residents met Monday in front of the community’s unmanned, volunteer firehouse wanting answers from the county. Why should the Highlands burn with all of that Lake Berryessa water stretching out below?

They talked about community water system problems and spotty fire hydrant performance. Some said Cal Fire should have done more to protect them that day when a third of the community’s homes went up in smoke.

“We need to be mad and we need to demand some changes up here,” Williams told the enthusiastic crowd.

County officials said firefighters didn’t run out of water during the firefight, though some hydrants lost pressure. They described violent downdrafts of wind causing fire blowups and structure-to-structure ignition.

This is life on Napa County’s wildfire frontier. Fires in recent years have struck with a vengeance – the 2017 Atlas Fire and 2018 County Fire threatened the community, the 2018 Steele fire destroyed eight homes there and this year’s Hennessey Fire delivered a devastating blow.

Berryessa Highlands was approved by the county in the 1960s as a Berryessa resort development that would have more than 2,000 homes, most envisioned as second homes. It would be a rural outpost in a hilly paradise with gorgeous views of Lake Berryessa. Water, not fire, would dominate.

The developer went bankrupt in the early 1970s and growth didn’t occur as planned. Still, the Highlands grew to about 350 homes, minus 93 lost to the Hennessey Fire.

But Berryessa Highlands is located in a fire severity zone rated by Cal Fire as high to very high. The 470-square-mile Hennessey fire drove that point home. Today’s Highlands view as far as the eye can see—other than the lake—is an incinerated landscape dotted by oaks and pines with sickly, flame-baked brown leaves.

Berryessa Highlands residents want to head off any further fire nightmares. As Williams said, they don’t want a situation of 93 homes down, 270 to go.

Much of Monday’s session involved the telling of stories of that Aug. 19 afternoon when the Hennessey Fire that had seemingly bypassed the community suddenly flared up and burned through it.

Resident John Johnson said he evacuated and received a call during the fire from an acquaintance. The message: his home was burning to the ground.

“He said we can’t do nothing because the fire hydrant doesn’t work,” Johnson said.

In other cases, fire hydrants did work. The anecdotal picture varied with the person and street.

Resident David Church, who didn’t evacuate, said Cal Fire by the morning of Aug. 19 had miles of fire lines and water lines charged and ready to go. Firefighters stopped the fire.

Then the situation changed. Church saw the fire take off. He and his son fought the fire near his house – which survived – and saw flames shoot up the canyon to burn other houses. He heard propane tanks blowing up.

“That whole time, Cal Fire had left. …There was not a Cal Fire truck to be seen anywhere. They could have stopped that fire. They’d stopped it already,” Church said.

Resident Evan Kilkus saved his home from the fire with a massive sprinkler system fed by his own water tank. He said those who still have homes can thank firefighters who in some situations put themselves between the flames and the houses.

“To all of you who don’t have houses, I don’t know what to say,” he told the crowd on Monday.

Berryessa Highlands is served by a water system that takes water from Lake Berryessa and runs it through a water treatment plant. The community has 67 fire hydrants.

Some Highlands residents have complained of faulty hydrants. County Deputy Public Works Director Phil Miller said by email that after the fire, the county learned from contract system operators that five hydrants needed “adjustments,” three of which were in the fire area.

On these five hydrants, it was difficult to operate the mechanism that turns the hydrant water flow on and off, he said.

The water treatment plant remained operating during the fire, but water demand exceeded what it could produce, Miller said. That led to partial dewatering of the system, mostly at higher elevations. Cal Fire is familiar with the system and as needed switched to hydrants at lower elevations that remained charged.

Still, Lake Berryessa is an immense water source. Some residents wondered why water couldn’t be pumped directly from the lake to the hydrants to provide all the flow needed.

A water system could be built with fire hydrants designed to fight a wildfire of this scale. But it would cost several million dollars and system customers would have to pay for it, Miller said.

That scenario looks unlikely. Highlands residents already pay about $400 every two months for water and sewer services and an annual assessment of about $900. A water system already facing financial challenges must now move forward with about a third of its customers lost to the fire.

This happened amid statewide demand that stretched fire resources thin, she said.

Firefighters experienced fluctuating pressure levels from the hydrants system, but got the water they needed, she said. The two water tenders each held several thousand gallons. Had there been the need, firefighters could have drafted water from the lake near the boat launch.

Yet firefighters failed to save the Highlands from significant loss. In contrast, firefighters in a later phase of the Hennessey Fire saved the Napa County rural outpost community of Berryessa Estates about 16 miles away.

“If you look at the differing topographic make-up of each area, you’ll see that the steep, lakeside canyons and ridges of Berryessa Highlands funnel smoke, fire and wind toward structures,” Upton said.

Plus, some Berryessa Highlands homes are built above others. That leads to structure-to-structure ignition because heat and gasses rise and in essence pre-heat the higher structures, contributing to rapid, explosive ignition, she said.

The Highlands fire spread at a “critical” rate, the most hazardous metric, Upton said. These types of fires move in excess of 3 mph and this is typically a factor in fatal wildland fires.

Whether the county can satisfy Berryessa Highlands residents amid their losses about what happened on Aug. 19 remains to be seen.

“Many of us feel, the only way the truth will come out, is if a Napa County civil grand jury investigates this matter, where people will answer under oath,” Williams said.

He noted Berryessa Highlands residents talked to the Napa Valley Register in 2018 about the fire concerns there. The concerns remain the same, he said.

Williams wants to see a manned fire station built in the Highlands, perhaps on a lot next to the unmanned station that houses a fire engine. He wants better water infrastructure.

One possible money source is the county’s oversight of efforts to renovate nearby Steele Canyon resort that uses the same water system, he said. The new concessionaire could help pay for upgrades and the new fire station.

County Supervisor Alfredo Pedroza said he will be in the Berryessa Highlands area for most of next Tuesday to listen to residents. He said he will bring documents to try to show what happened with the water system during the firefight.

Some Highlands residents are questioning whether they want to keep living in wildfire country.

Thomas Hopkins lost his home to the fire, even after paying $8,000 to remove a tree that posed a fire hazard and having defensible space. He’s seen three years of evacuations and after 28 years at Berryessa Highlands, he’s thinking of moving on.

Pamela Daniel’s house survived. She’s not thinking of moving away from Berryessa Highlands because of the fire threat.

“No, I like living up here,” she said. “But I think we deserve the same safety when I lived in Napa for 22 years and our fire hydrants worked.”

The water problems caused by the Hennessey Fire at Berryessa Highlands are shared by other California fire communities.

Berryessa Highlands trying to recover a year after Hennessey fire

The Hennessey fire a year ago destroyed almost a third of Berryessa Highlands. What's it like there today?

John Bentz of The Duct Doctor looked at the wreckage of Berryessa Highlands homes on a recent day. He is removing ash from homes that survived.

A Napa County notice proclaims the wreckage of a Berryessa Highlands home as being unsafe.

The remains of a car burned when the Hennessey fire swept through Berryessa Highlands on Aug. 19.

The entrance to Berryessa Highlands was blackened by the Hennessey fire, though the sign survived. The fire destroyed about 93 homes in the rural community near Lake Berryessa.