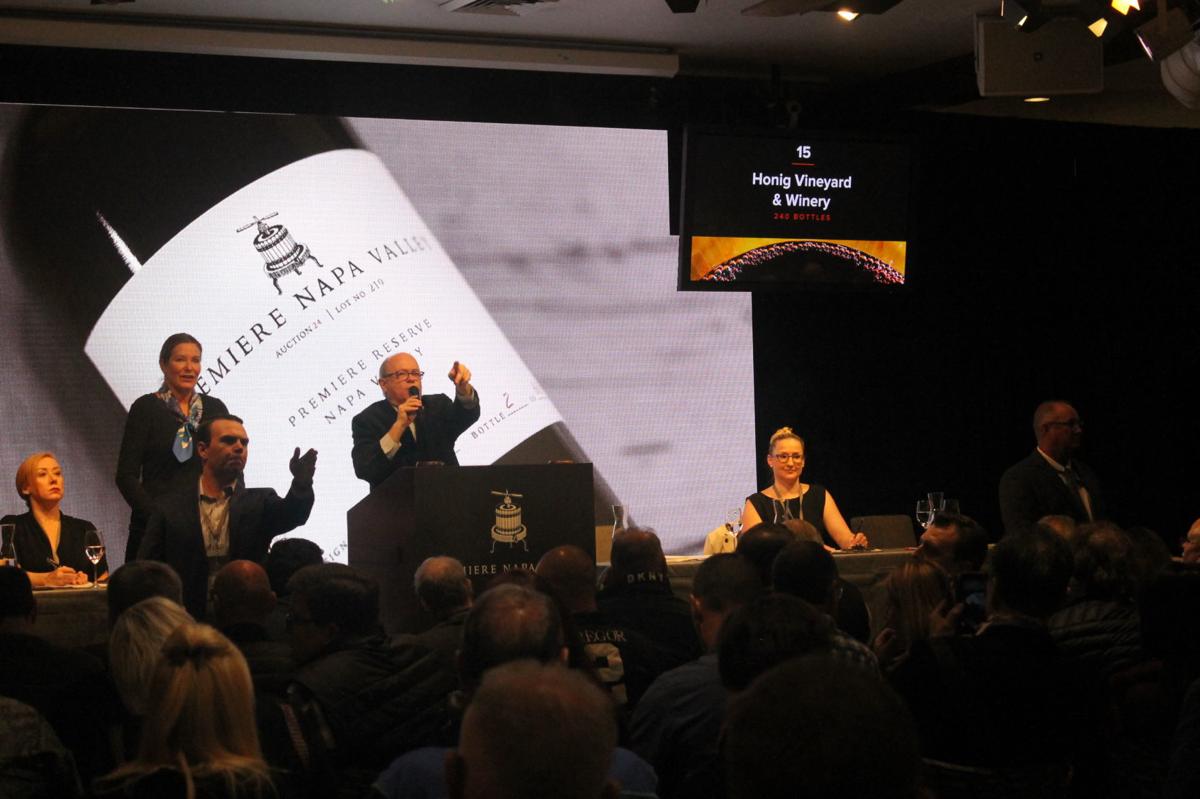 Auctioneers Fritz Hatton and Ursula Hermacinski call for bids on lot 15 from Honig Vineyard and Winery at Premiere Napa Valley on Saturday. 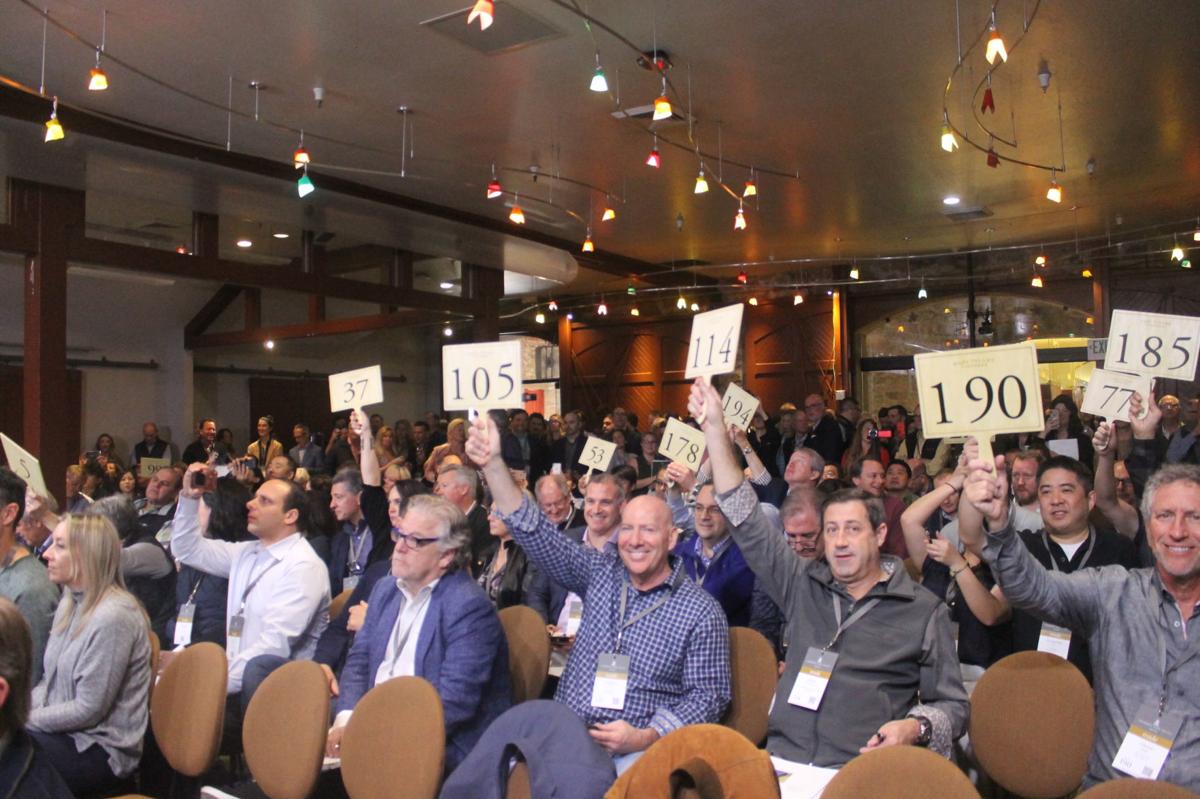 Bidders at Premiere Napa Valley raise their paddles in celebration of the auction's commencement. 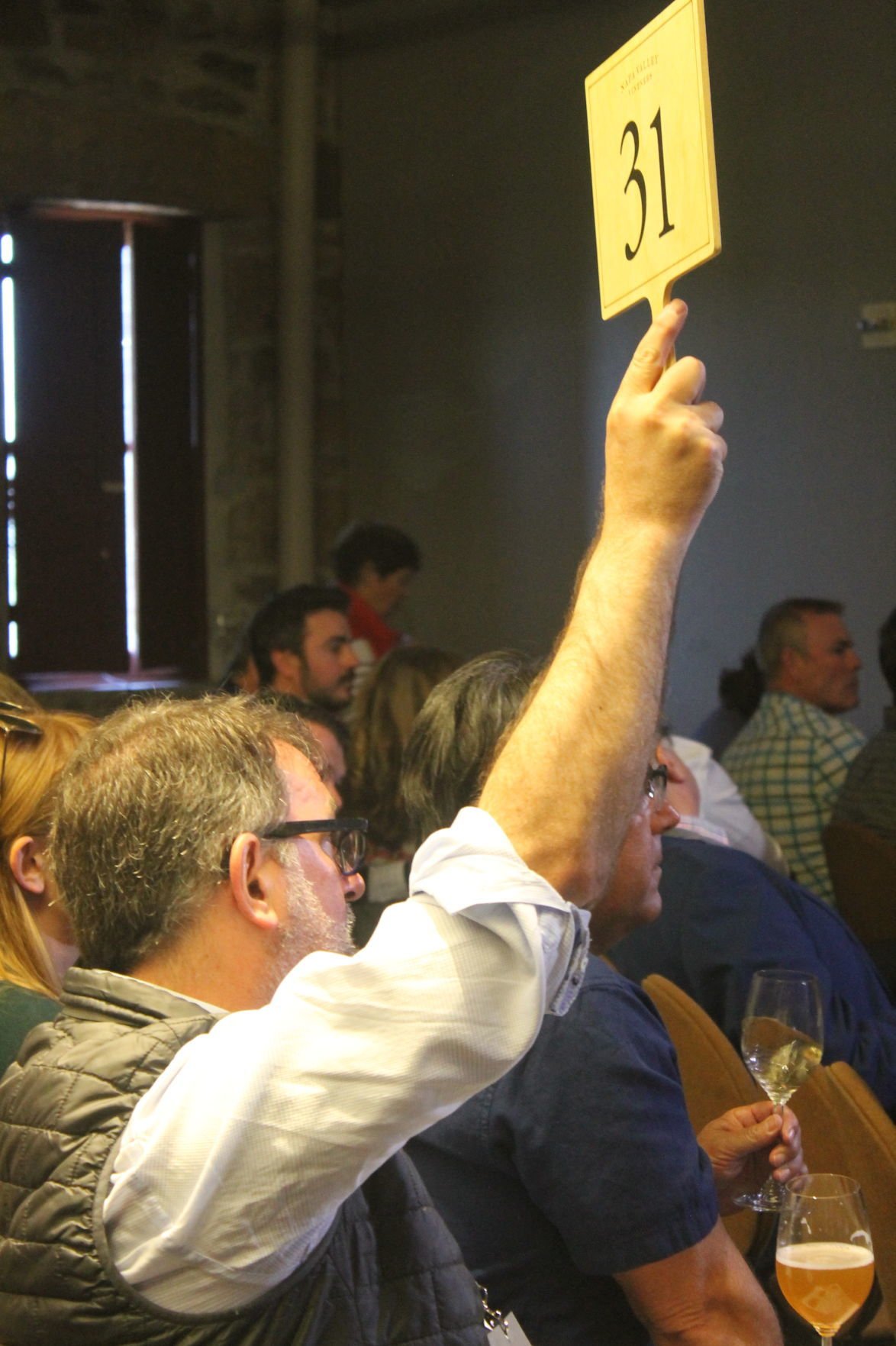 Brent Pierce of BPW, a wine merchant in Napa, raises his paddle during bidding on a lot at this year's Premiere Napa Valley. 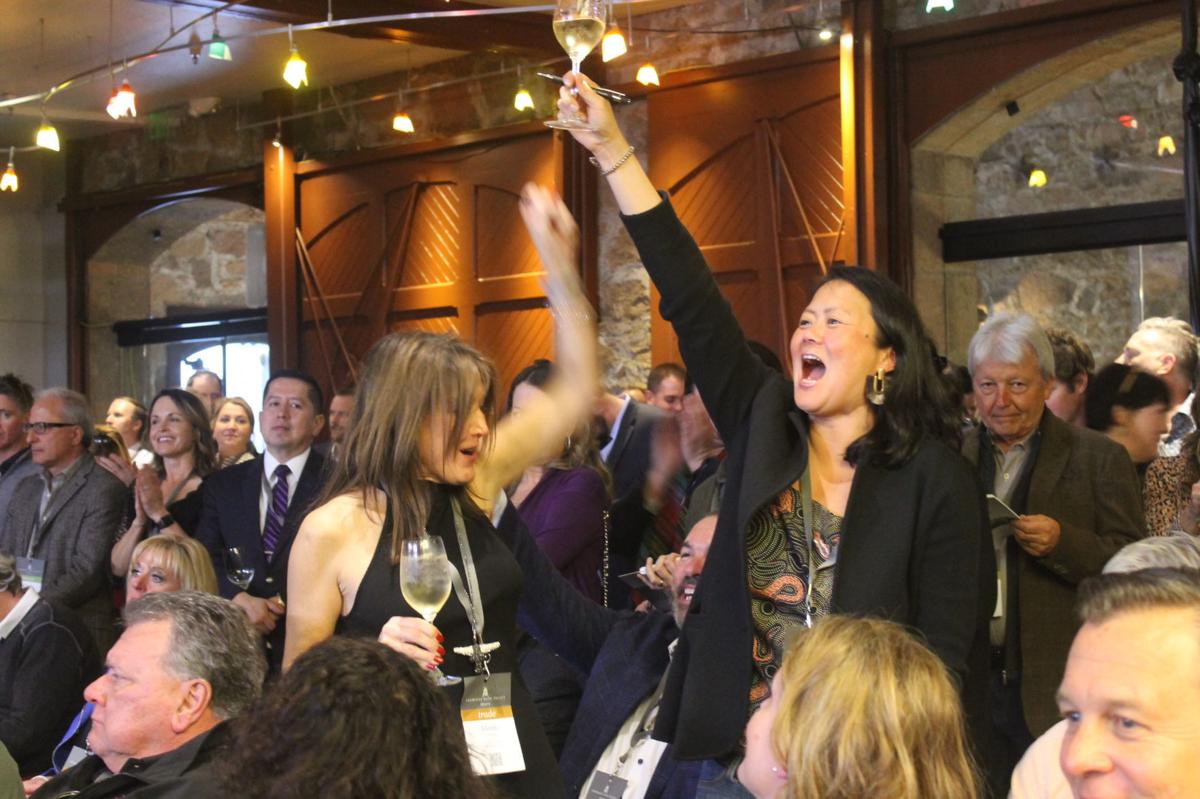 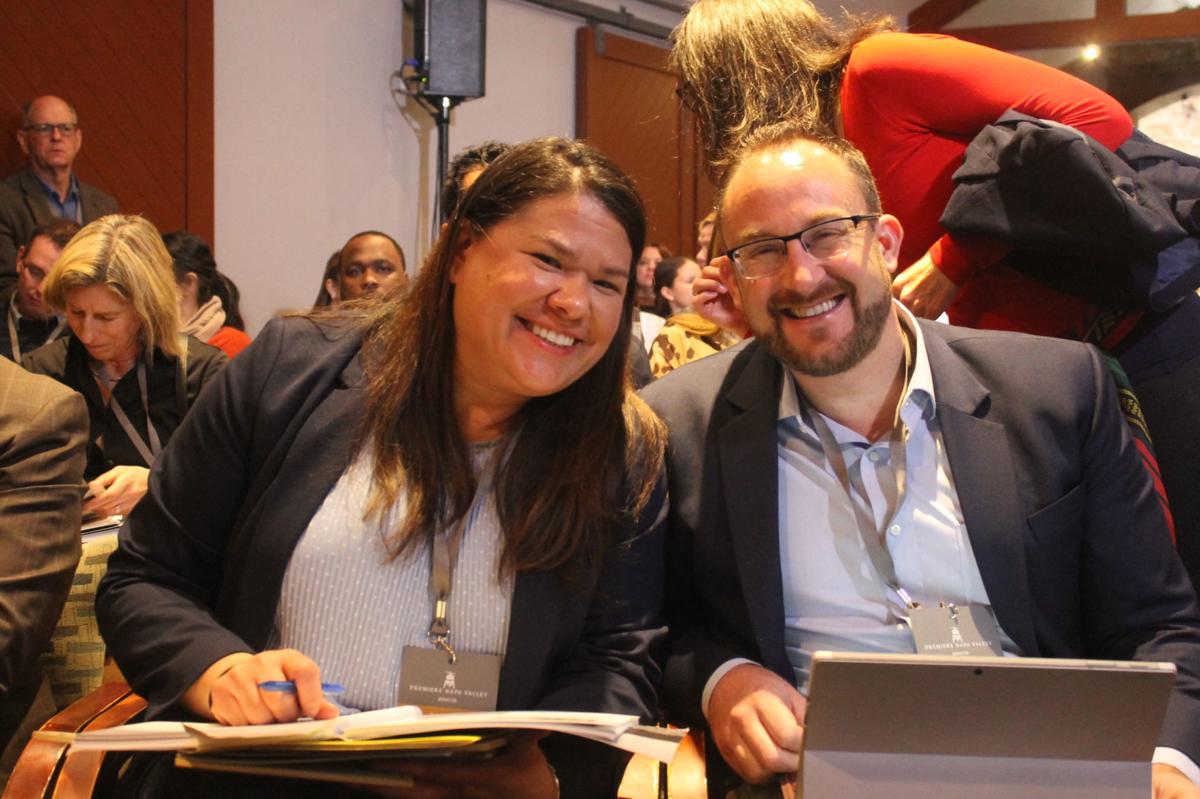 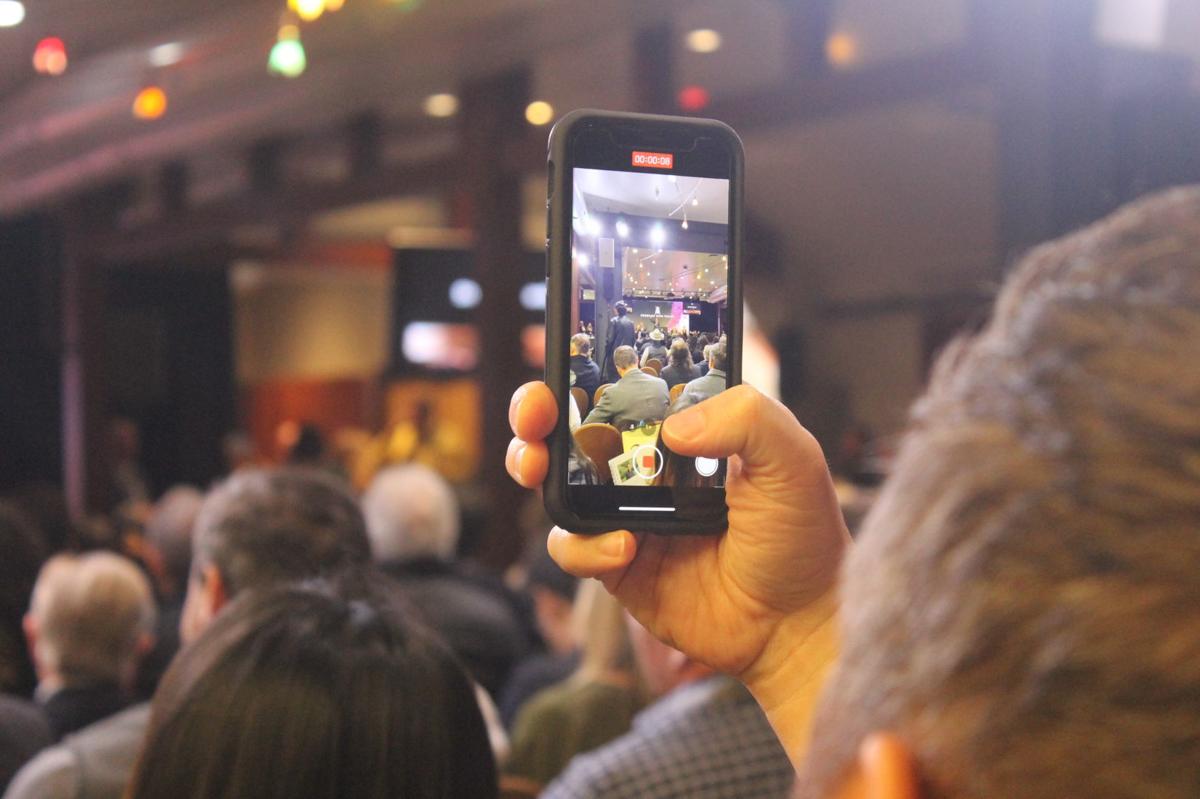 A Premiere Napa Valley audience member takes video of bidding on lot 78 from Shafer Vineyards, which was billed as a tribute to the late vintner John Shafer, who died in May 2018.

It was the top lot of 201 lots – mostly Cabernet Sauvignon from the 2018 vintage.

After the auction ended, Greber said he wanted to honor Leslie Rudd, who died in the past year. His group from Switzerland was sitting in the front row, waiting until nearly the end of the auction to put in their bid. Auctioneer Fritz Hatton accepted the $120,000 bid as the first bid and immediately after slammed the hammer down, declaring the lot sold. It was the largest bid of the afternoon.

A total for the futures auction was not available at presstime on Saturday night.

A second tribute bid brought the packed audience in the third floor of the Culinary Institute of America at Greystone to its feet.

The 5-case lot of 2018 Cabernet Sauvignon from Shafer Vineyards brought $85,000. Auctioneer Ursula Hermacinski announced the lot was a tribute to John Shafer, who passed away a year ago. Shafer first planted the hillside vineyard in the early 1970s. The audience cheered and applauded at both ends of the auction, especially as the bids reached $50,000, $60,000 and finally $85,000.

Buying the lot were Cristina Pearce and Matt Delly from Total Wine and Spirits.

Saturday morning at the Culinary Institute of America, the second floor barrel room was filled with Napa Valley winemakers, winery owners, trade members and potential bidders for the unique wines that make up Premiere Napa Valley.

One of the wines was a 2018 Malbec, “Francois’ Pick” created by winemakers Francois Bugue and Christopher Howell of Cain Vineyard & Winery from Spring Mountain District. Bugue declared, “This is the best Malbec in the room today.” When asked how many 100 percent Malbecs are in the room, he replied, “One.”

Aromatic on the nose with juicy, perfumed fruit and a backbone of firm tannins with a meaty, mineral complexity, tt was one of two Malbecs out of 201 PNV lots. It sold for $7,000.

Bugue has been winemaker at Cain for the past 27 years.

Also talking about the 2018 vintage, Master Sommelier Bob Bath said, “We’ve been fortunate we’ve had a string of outstanding vintages since 2012. But I think 2018 is going to be a standout. When you look at that run — 2012 and 2016 being a couple of my personal favorites — what I like about the 2018s is the depth of their character, a depth of fruit and structure for long-term aging. So for me, this is the best of both worlds. The fruit is not overripe; it is perfectly ripe.”

He added there was a good-size crop in 2018, with “a lot of concentration and depth.” Bath added, “Even though they are fun to taste now, this wine could use some cellaring. The best ones could easily age 20-25 years. They are going to be approachable, they are going to be tempting, but you’ll be rewarded by waiting.”

Diamond Mountain vintner Dawnine Dyer added the wines from 2018 are, “In my opinion, the 2018 was a real classic Cabernet vintage for Napa Valley.”

One of the 180 wines from 2018 vintage was a Stags’ Leap Winery Cabernet Sauvignon called “Audentia.” Pouring the wine was Csilla Kato, a part of the winemaking team. The wine was fermented in puncheons, which hold 180 gallons and are only used for fermenting the Premiere lots. Kato said the puncheons provide an early integration of wine and fruit. It is a dark fruited wine that has firm tannins for aging. It will be released in October 2021. The winemaker was Christophe Paubert. The name of the lot, “Audentia” comes from co-founder Horace Chase’s family motto: “Sed Contra Audentior Ito,” which means, “always push harder.”

One of two sparkling wines was a 1994 reserve from Schramsberg Vineyards. It was late disgorged.

On its lees for 25 years, this exceptional sparkling wine has a blend of dried apple and mango fruit with still-bright pear and apple, made complex by honey, nutty, hay aromas and flavors. Always a favorite of the winemakers in the room, Hugh Davies greets a heavy stream of visitors. Fritz Hatton sold the 5-case lot for $4,000. At the beginning of the bid, he said, “We got 15 paddles up at $4,000, can you help me out?” The bid went quickly to $10,000 and it sold for $24,000.

Paula Kornell grew up in the Napa Valley at her father's Champagne Cellars in Calistoga and she brings a Premiere Napa Valley sparkling wine that is both new and old ... and honors her father, Hanns Kornell.

In an exciting turn of events Saturday evening, two competing bidders were each declared winners of a week’s stay in Tuscany, thus doubling th…

The epically challenged 2017 vintage that had early rains, heat spikes and devastating fires was on display at the recent Premiere Napa Valley…

ST. HELENA — For a few hours Saturday, the Culinary Institute of America at Greystone became the center of gravity for Napa wine, with the Pre…

What did our winemakers bring to the table when it came to Premiere Napa Valley’s 2018 events? A taste of their auction lots, for sure, but ea…

Auctioneers Fritz Hatton and Ursula Hermacinski call for bids on lot 15 from Honig Vineyard and Winery at Premiere Napa Valley on Saturday.

Bidders at Premiere Napa Valley raise their paddles in celebration of the auction's commencement.

Brent Pierce of BPW, a wine merchant in Napa, raises his paddle during bidding on a lot at this year's Premiere Napa Valley.

A Premiere Napa Valley audience member takes video of bidding on lot 78 from Shafer Vineyards, which was billed as a tribute to the late vintner John Shafer, who died in May 2018.