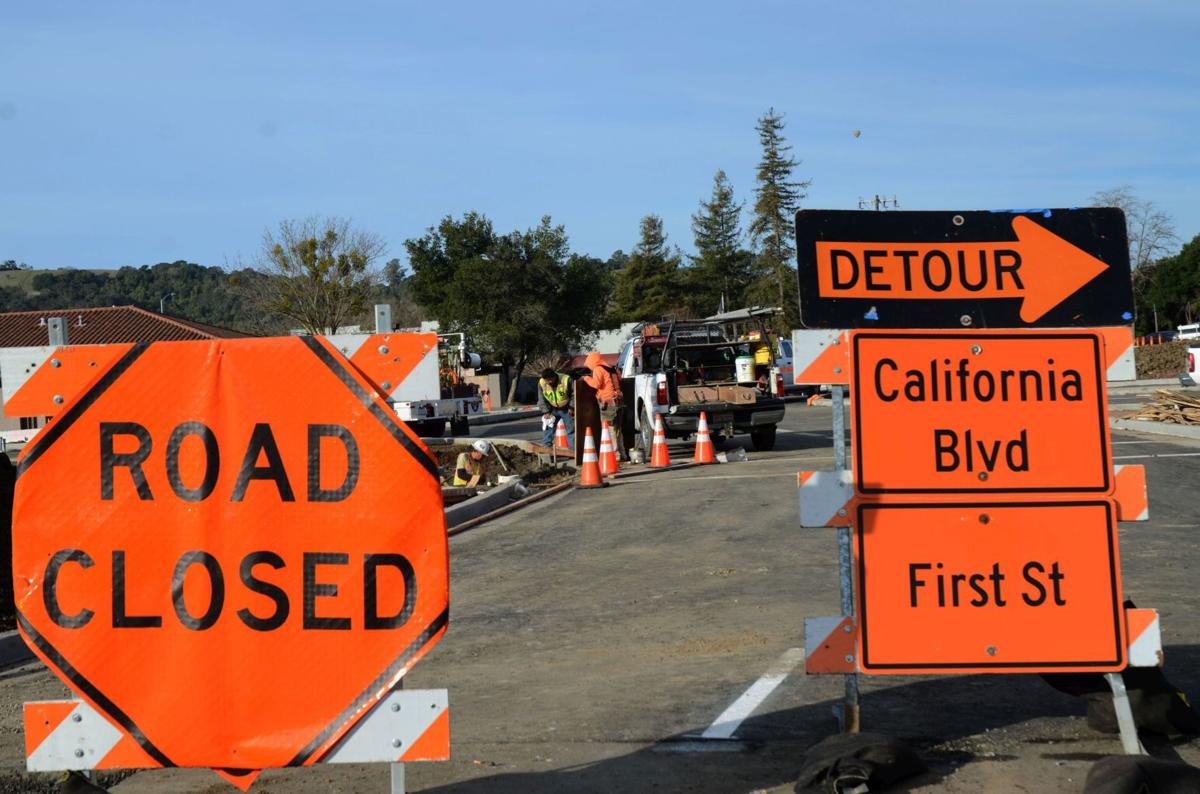 Workers put the finishing touches on one of the new roundabouts at First Street in Napa on Friday morning. Plans call for First and Second streets to flip their one-way directions this coming week. 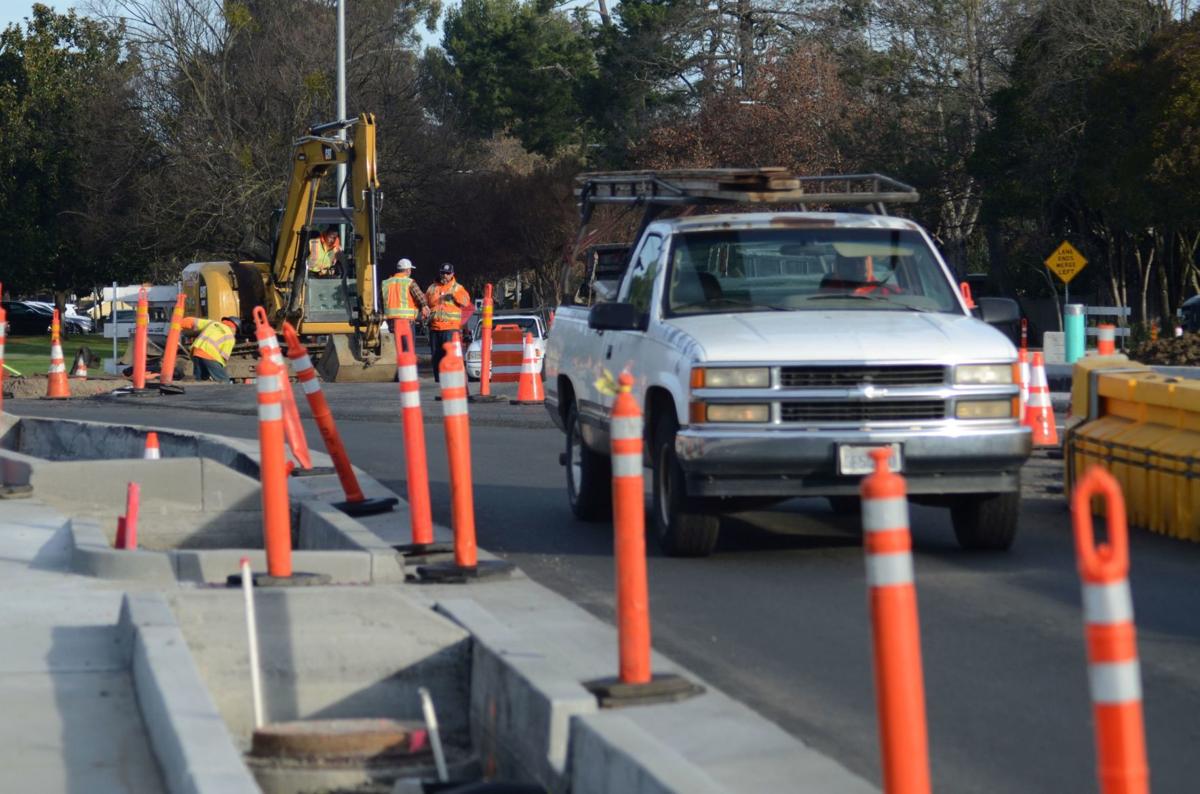 Workers finish up a portion of the soon-to-be-complete roundabout complex at First Street in Napa on Friday morning.

The freeway entrance into downtown Napa will be shaken up next week with the debut of a second roundabout, then the one-way directions of First and Second streets flipping on Friday between California Boulevard and Jefferson Street.

These will be the most significant traffic changes in the downtown area since First and Second in the business district became two-way in 2014 after being one-way for over a half century, said Eric Whan, the city’s deputy public works director.

Motorists should already be primed to expect the unexpected, given the major construction over the past six months at First and the freeway where three traffic roundabouts are being built.

Thousands of motorists have been forced into detours around the construction zone. Since November, many have learned to master the first roundabout on First at the freeway on- and off-ramps, Whan said.

Before First and Second flip on Friday — weather permitting — the second roundabout at the mouth of First Street will go into limited service, allowing eastbound vehicles to spin onto California Boulevard northbound, he said.

Residents on First and Second west of Jefferson have been asked not to park on the street Thursday and Friday while workers remove old signs and pavement markers in anticipation of the flip before dawn Friday, Whan said.

“We’ve done a lot of work already, with new signal heads and new wiring,” Whan said. The raised median on Jefferson between First and Second was removed to accommodate new traffic movements, he said.

“You don’t want people turning westbound onto First Street. You need to get rid of the turn pockets,” he said.

The city has been moving toward this street flip since it adopted its Downtown Specific Plan years ago. The City Council wanted two-way streets in the core of downtown to slow traffic and improve access to businesses, Whan said.

The flip of First and Second west of Jefferson is an extension of this plan. “It will make it a bit easier for people to get off 29 and into downtown. It’s a circuitous route right now,” he said.

Instead of visitors ending up on Second Street in downtown, they’ll drive through the heart of the central business on First, he said.

The conversion of First and Second to two-way in October, 2014, forced motorists and pedestrians to learn new behaviors overnight.

“It’s weird driving on the other side of the road. You can’t help but feel like you’re breaking the rules after it being one-way all these years,” said one Napa resident.

There was a lot of horn honking and some close calls those first few days, but no major collisions, police said at the time.

Traffic on First and Second between Jefferson and California will be reduced to one lane on Thursday and Friday so workers can put down new pavement markings and signage, Whan said.

The planned third roundabout at Second and California won’t be fully functional until the end of January, when the connection to California south of Second will reopen, Whan said.

No. 1: Napa Sheriff's Office says motorist who died after shooting at deputy had criminal record

April 16, 2019: An out-of-control car driven by a Napa woman left the driveway at Bel Aire Plaza and crashed through the dining patio at Villa…

No. 3: Police: Bear rescued after being stranded in tree on Napa street

Jun. 1, 2019: Police, firefighters and state wildlife officers joined forces in Napa to rescue a bear that became stranded in a tree for sever…

Feb. 27, 2019: The Napa Valley escaped major flooding as the Napa River hit its plateau in the Upvalley and began receding at dawn, county off…

Sept. 24, 2019: Students at Browns Valley Elementary School gathered to remember their classmate, Addie Dominici, who was in a combination fir…

Feb. 5, 2019: A vigil is planned for Douglas D. Davis Jr., the 54-year-old Napa man who died after being attacked while riding his bike on the…

Oct. 13, 2019: PG&E is taking Calistoga vineyard owner Terry Gard to court, to seize a portion of his land for a liquid natural gas plant.

No. 10: Napa superintendent reacts to arrest of a River Middle School student after mass shooting threat

Get ready, drivers. The first of 3 planned roundabouts next to Highway 29 opens Thursday.

3 Napa roundabouts taking shape as motorists weave through the project

The torn-up intersection at First Street and Highway 29 is being remade for not one, but three roundabouts.

What kind of public art should grace the 3 roundabouts taking form near First Street?

$350,000 is budgeted for a piece of public art next to Napa's new roundabouts. Skip the grape theme, one adviser says.

How bad is traffic now that the light at First and California is gone? Better than you might have expected.

2019 is ending with a flurry of good stories. These are some of my favorite. They capture the flavor of life in Napa.

Despite the fears of many motorists that mayhem would result, no crashes have been reported on First or Second streets since they were convert…

Some liked it, some didn’t, and others just thought it was weird. Either way, drivers can now drive in both directions when traveling on First…

After months of public comment about the wisdom of converting First and Second streets from one-way to two-way in downtown Napa, the big chang…

Reversing the directions of one-way First and Second streets will depend on this week's weather.

Motorists going in and out of downtown now have new traffic patterns to learn, including a big roundabout.

Got an opinion about the latest Napa traffic changes?

Motorists voice withering criticism -- and some praise -- of the new First Street roundabout.

Let's come together around roundabouts

Letters: If the Europeans can do it, so can we.

The Napa roundabout project is in the home stretch, with all three fully working by the end of February.

Workers put the finishing touches on one of the new roundabouts at First Street in Napa on Friday morning. Plans call for First and Second streets to flip their one-way directions this coming week.

Workers finish up a portion of the soon-to-be-complete roundabout complex at First Street in Napa on Friday morning.