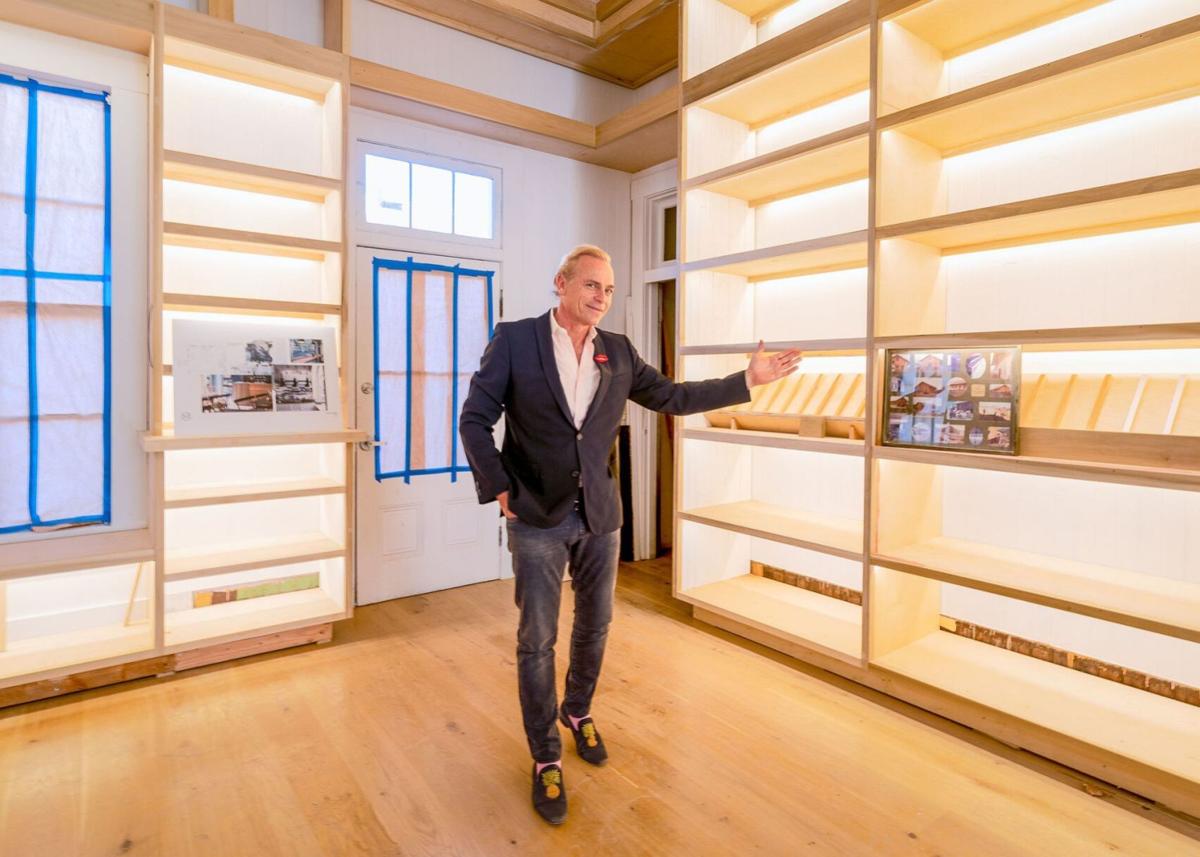 Jean-Charles Boisset's renovations to the interior of the historic Calistoga Depot will feature an upscale grocery, an on-site brewery, and spirits tasting room. 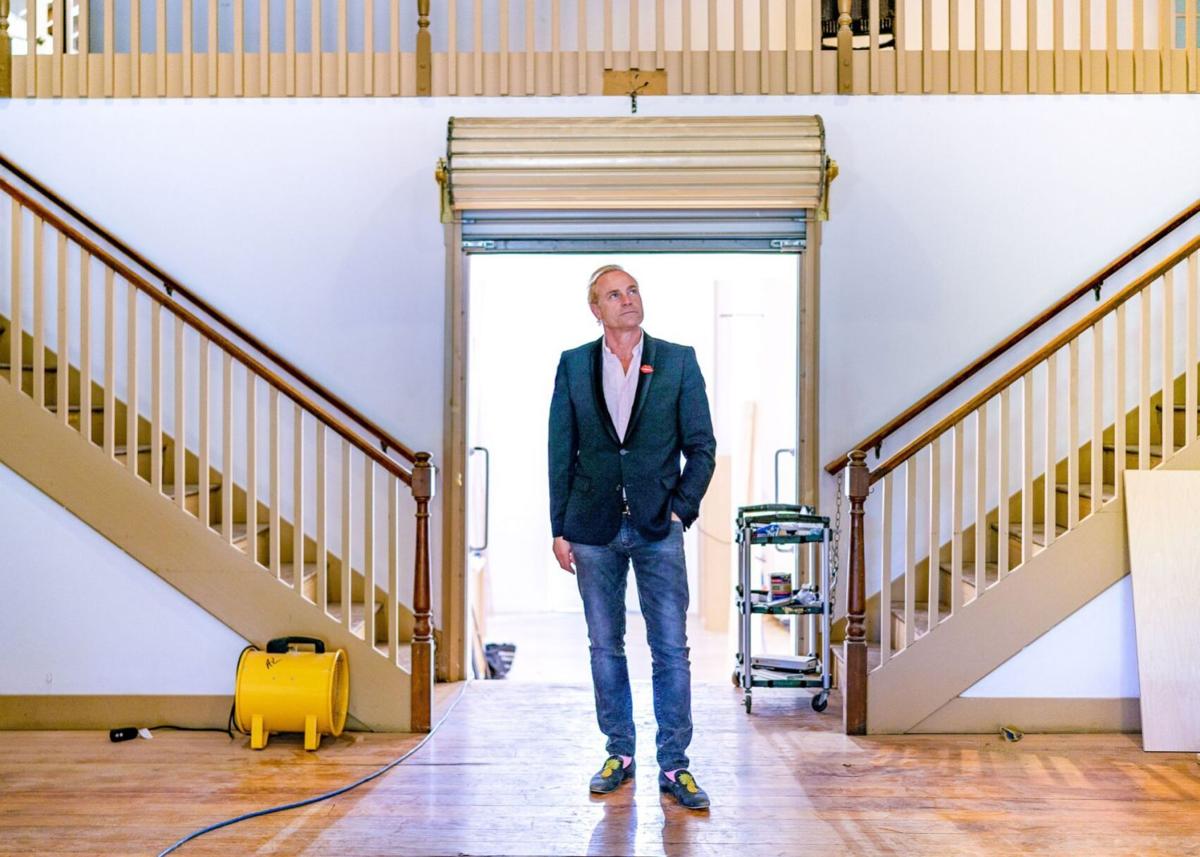 The historic Calistoga Depot is the latest Napa Valley acquisition for Jean-Charles Boisset. 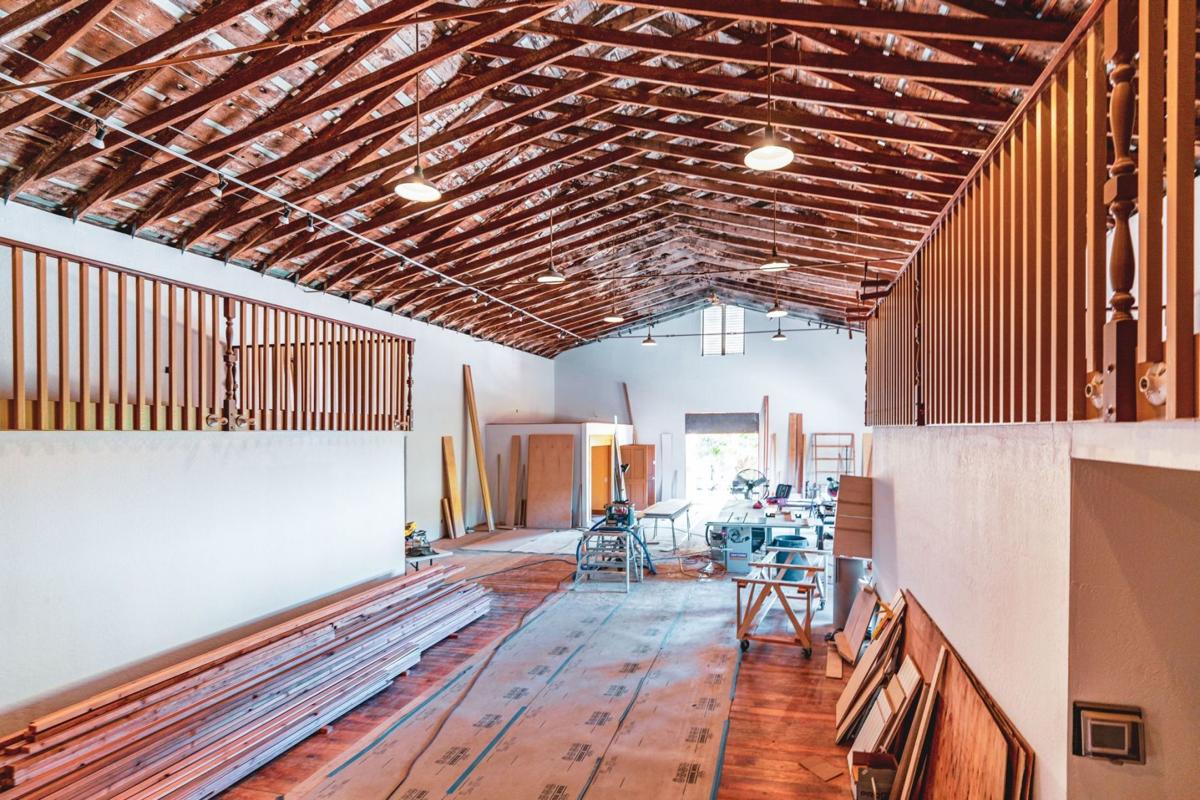 The Calistoga Depot, where trains once arrived on their way up the Napa Valley from Vallejo, is undergoing renovation by JCB to transform it into a spirits tasting room, and tribute to town founder Sam Brannan. 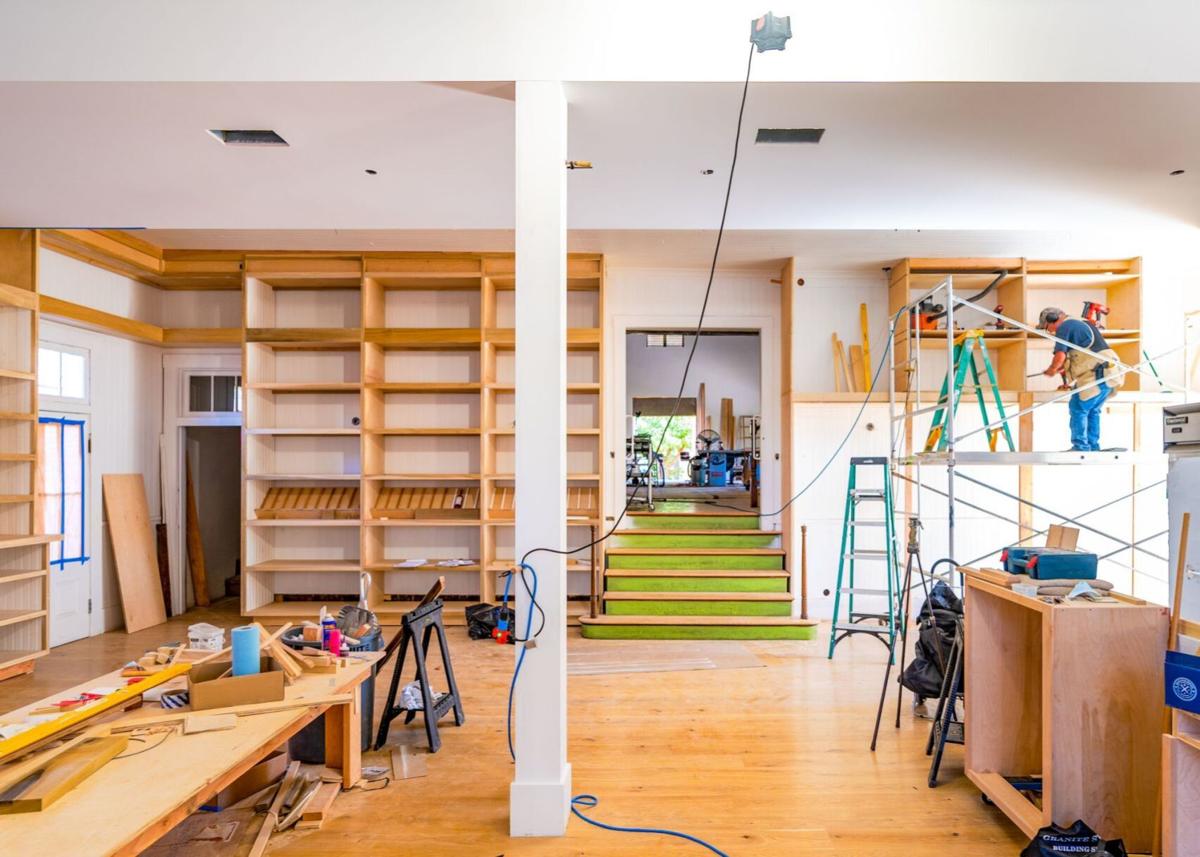 JCB’s renovations call for the front part of the Calistoga Depot to house a deli, espresso bar, an upscale grocery and retail space. 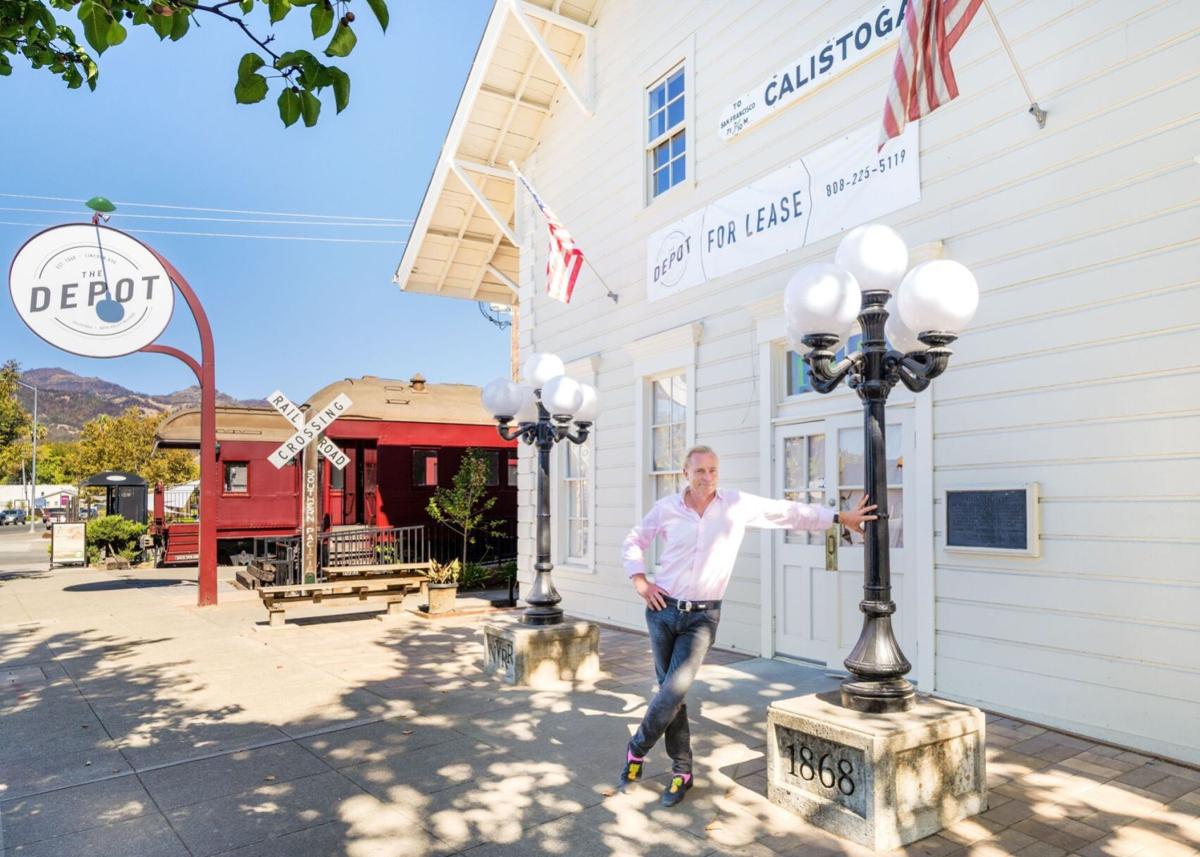 Jean-Charles Boisset has added the historic Calistoga Depot to JCB's stable of properties in Napa Valley. 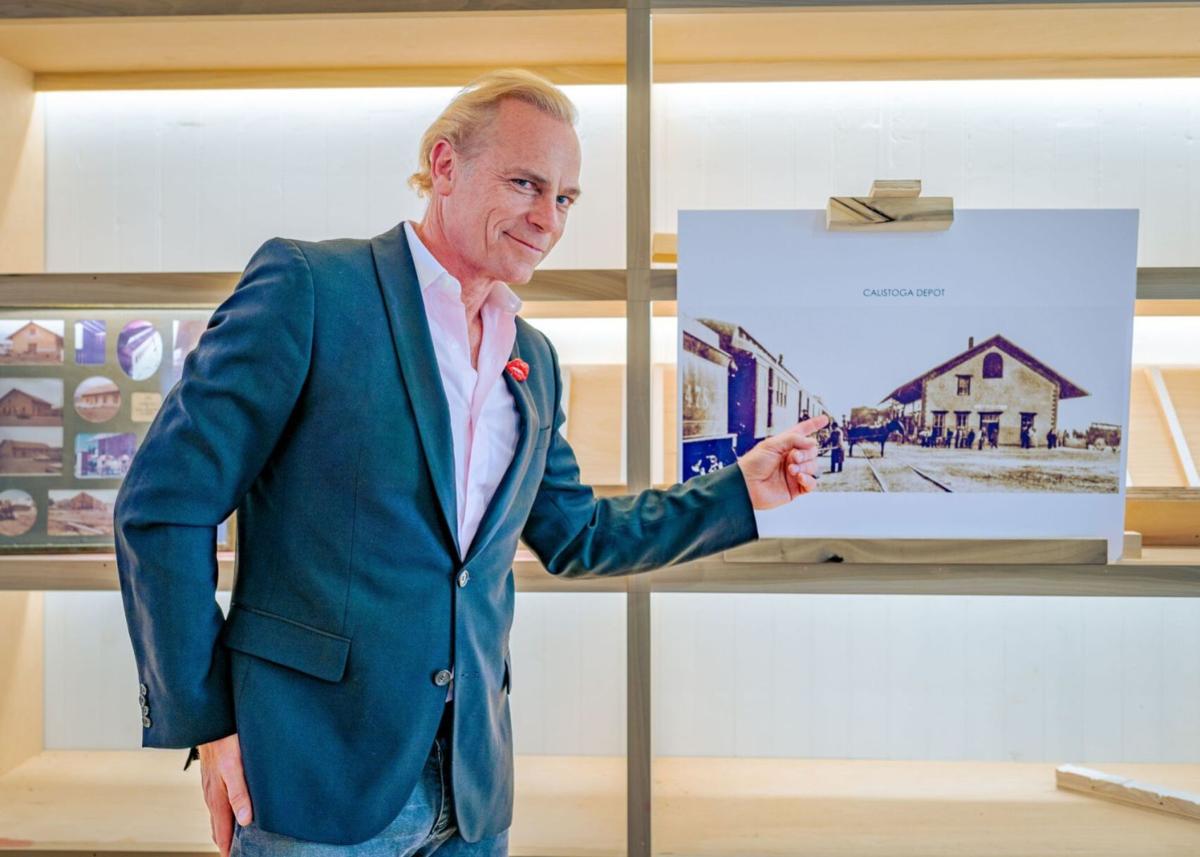 Renovations to the interior of the Calistoga Depot, built in 1868, will feature town founder Sam Brannan, as envisioned by new owner Jean-Charles Boisset.

CALISTOGA — The Jean-Charles Boisset Collection has added another historical property to its stable of Napa Valley landmarks.

The sale of the Calistoga Depot was finalized in September, just weeks after JCB’s plans to renovate the interior of the property were approved by the city.

“It was serendipitous. It was very much meant to be,” said Patrick Eagan, JCB vice-president of marketing and communications.

The purchase comes on the heels of JCB’s recent acquisition of the historic Ink House just south of St. Helena, and the signing of a lease for a new tasting room for the Sonoma Buena Vista Winery in the 1929 Gordon Building in downtown Napa. Boisset is also the owner of the Oakville Grocery, the oldest in the state, and JCB has a tasting salon in Yountville.

It’s about expanding the JCB brand, Boisset said, and perpetuating “the Napa dream.”

“The idea is for us to have a historical, meaningful presence in every town in Napa Valley. We’re being very bullish about it,” he said, adding there are also few more acquisitions in the works. “There are exciting things coming up. You’ll see.”

JCB also has a large presence in Sonoma with Buena Vista, the oldest winery in Sonoma.

“Certain historical buildings, like the Depot, have a charm and resonance that can’t be recreated. More than just creating new buildings, we can add to the legacy of a place by telling historical stories and connecting to the authenticity of the place,” Egan said.

Boisset has cultivated the same type of presence and imprint in his native Burgundy, France, where he has properties in each of the region’s villages.

“France is exciting because you can go and see buildings that are centuries old, like the Palace of Versailles,” Boisset said. “We are the shareholders of the future generation’s vision. (The preservation) is important specifically in the U.S., a younger nation, for the younger generations to come.”

Boisset and his team have toured the Sharpsteen Museum in Calistoga, buying books on the history of the town and its founder, Sam Brannan, and curating images to recreate the Depot experience. “They’ve been extremely supportive and very, very helpful,” Egan said.

The Calistoga Depot is the second oldest train station in California. The Merchant family, owners of the nearby Indian Springs Resort, purchased the Depot in 2016. Over the years, the building and adjacent train cars have been home to various businesses including the Wine Stop, and Palisades Deli. For the past year or so, however, the property has sat mostly empty. Last year, with plans to turn the Depot into a restaurant, the Merchants arranged to have a historic rail car removed from the interior of the property and brought to be preserved in the train museum in Sacramento.

JCB’s renovations call for the front part of the Depot to house a deli, espresso bar, an upscale grocery and retail space. A December opening is planned for those outlets.

The greater interior will be more of a “destination,” Egan said. With its grand historical ceilings, it will house a multi-faceted spirits and beer tasting salon featuring a glass-encased copper-clad still (the spirits will be distilled elsewhere). There will also be a private tasting room.

The beer, Belgian-styled and West Coast-inspired, will be produced on-site in the rear building that formerly housed Picayune Cellars and was once the office of The Weekly Calistogan.

Despite being known for his wine, Boisset is no stranger to beer. His grandparents grew hops in Burgundy, and he previously brewed a brand of beer here in California called Apollo. JCB also grows hops in Napa Valley, Egan said.

The tasting room/lounge is planned to open next spring.

As for the six rail cars, rumors of a champagne, caviar and oyster bar were not denied. Earth & Sky Chocolates, which currently occupies one of the cars, will be expanded.

JCB paid $4.9 million for the Depot property, which includes the main building, the six adjacent train cars, and the smaller building in the rear. The sale has created a partnership, Egan said, and the Merchants are still very much involved in the new project.

Boisset described the relationship with the Merchants as “One family to another. We’re going to do a lot of things together, so it made tremendous sense (to purchase the property).”

Selling the property will allow the Merchants more time and energy to develop the Veranda Hotel project, going in just next door to the Depot property. The project will be an extension of Indian Springs, and calls for a two-story, 96-room hotel, restaurant and bar.

“The Merchants have done a phenomenal job on renovating the Depot. They started the visioning. To activate a historic property requires you to be very active and constantly create the energy around it, and they have a very big project next door,” Egan said. “Danny (Merchant) has been very instrumental in introducing us to people in town and is very involved in seeing this project successful.”

JCB operates nearly 30 wineries in California, France, and Canada. Along with selling wine, the company also produces a line of products that includes jewelry and promotes a certain affluent lifestyle.

Sam Brannan, Calistoga’s founder, built the Depot in 1868, hence the name of JCB’s new brand of products, Calistoga Depot Provisions 1868. One of the brand’s new spirits is named Prosperous and Penniless after Sam Brannan’s journey from prosperity back to being penniless.

“We love the flair and style of Calistoga and we're going to try our best to represent it, from Sam Brannan, to the energy we want in the town today, to bring the people we want to attract," Boisset said. "We want to showcase Calistoga and what it’s all about in Germany, France, Japan, Canada, Africa, we’re really going to take this brand with our spirits, beer and wine all around the world.”

And soon, JCB brand followers can start in San Francisco, in a tasting room at the Ritz Carleton, and work their way up the Valley with the brand.

“The same journey that Sam Brannan would have taken,” Boisset said.

Photos: The historic Calistoga Depot through the years

Moved, but not forgotten

Letters: Thanks for helping to save historic railroad car.

The train has left the station: Historic Calistoga railway car heads to museum

After sitting in the Calistoga Depot for decades, the rare Central Pacific Coach No. 12 has been taken to Sacramento for rehabilitation and display.

Memories of Calistoga and the Southern Pacific Railroad

Jean-Charles Boisset's renovations to the interior of the historic Calistoga Depot will feature an upscale grocery, an on-site brewery, and spirits tasting room.

The historic Calistoga Depot is the latest Napa Valley acquisition for Jean-Charles Boisset.

The Calistoga Depot, where trains once arrived on their way up the Napa Valley from Vallejo, is undergoing renovation by JCB to transform it into a spirits tasting room, and tribute to town founder Sam Brannan.

JCB’s renovations call for the front part of the Calistoga Depot to house a deli, espresso bar, an upscale grocery and retail space.

Jean-Charles Boisset has added the historic Calistoga Depot to JCB's stable of properties in Napa Valley.

Renovations to the interior of the Calistoga Depot, built in 1868, will feature town founder Sam Brannan, as envisioned by new owner Jean-Charles Boisset.