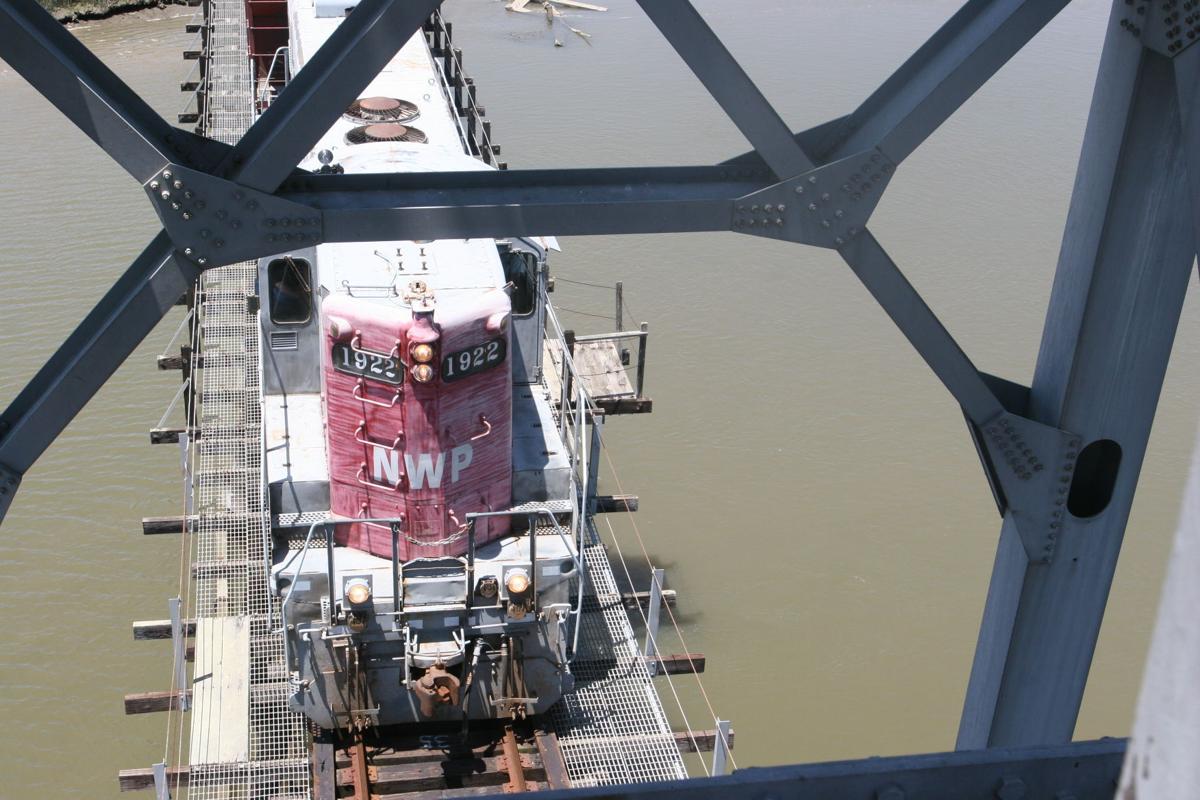 A Northwestern Pacific Railroad train prepares to cross the Napa River on the Brazos Bridge. 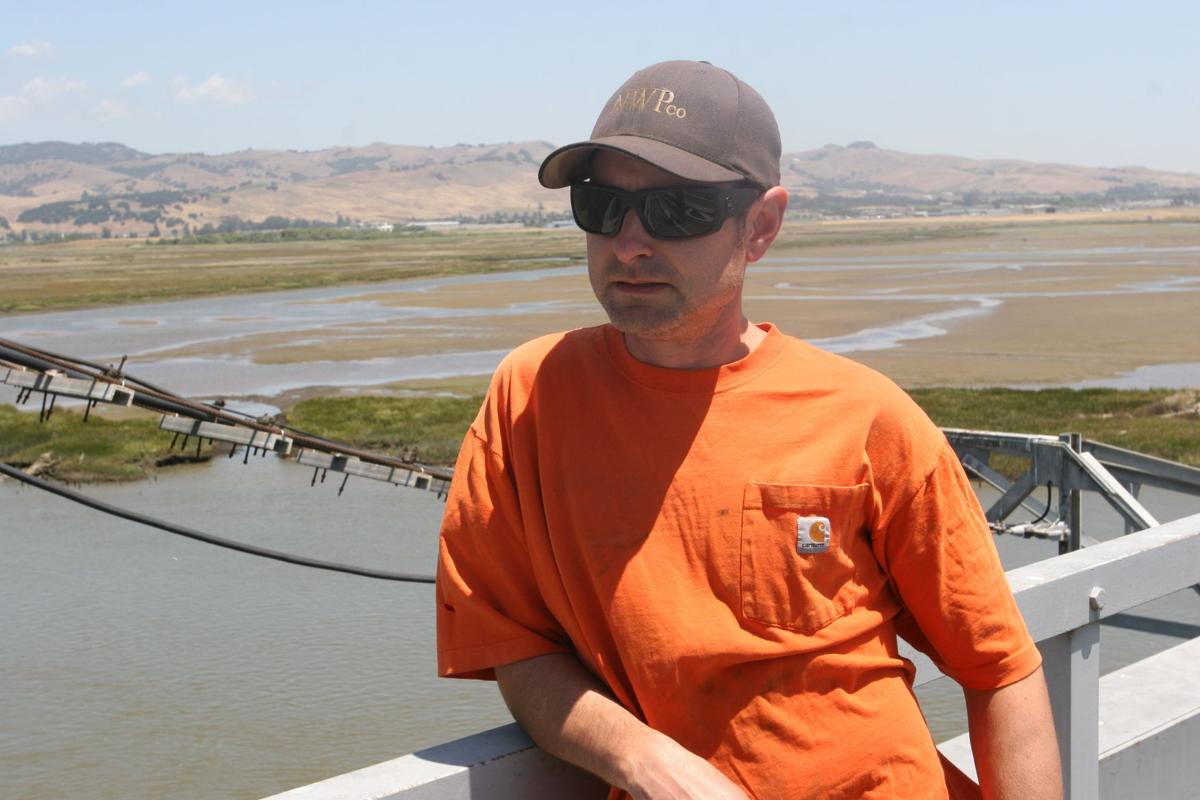 Jake Park, general manager of Northwestern Pacific Railroad Co., takes in the view from the top of Brazos Bridge prior to lowering the drawbridge for a train. 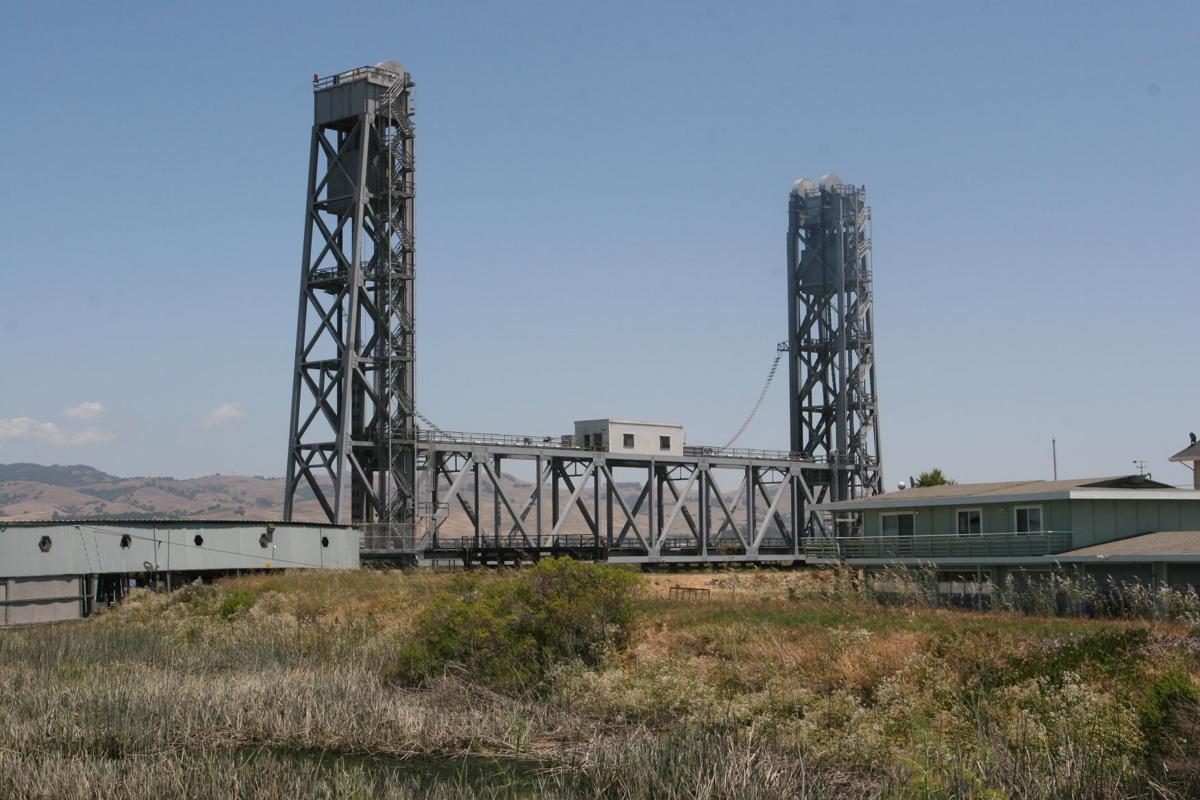 A lowered Brazos Bridge as seen from Milton Road in south Napa County is ready to carry trains across the Napa River. 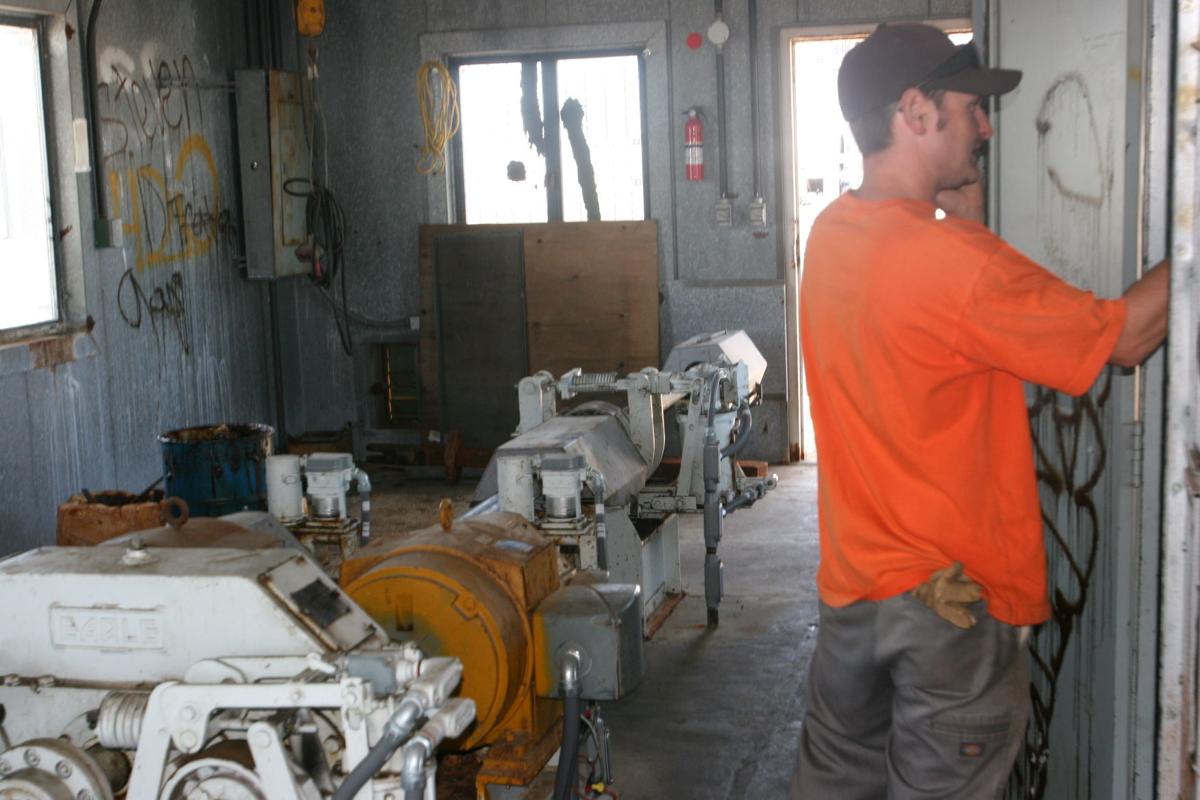 Jake Park saw the distant freight train and brought the electric motors of Brazos Bridge humming to life, an event that could become more common if a potential, mini-railroad renaissance takes hold.

Down went the deck of the drawbridge on a slow journey toward the Napa River below. Up went a metal counterweight as tall as a building.

“I don’t know what it weighs, but it’s heavy,” Park said as he watched thick cables hoist the counterweight to the top of the bridge’s western tower.

Within minutes, the train tracks on the bridge span aligned with those near Green Island on one shore and the Carneros region on the other. Napa County’s last major drawbridge had done its job and the freight train could continue on its way.

The iconic Brazos Bridge is more than a weathered, metal monument to the glory days of trains. This Erector Set-like contraption towering above south county wetlands is key to possible growth in local freight and passenger rail.

That potential renaissance is off to a relaxed start. The once-busy train corridor is used a few times a week by the Northwestern Pacific Railroad Co. for freight trips and perhaps twice a year by Sonoma-Marin Area Rail Transit (SMART) for special passenger trains traveling from Sacramento to Sonoma Raceway.

Park had just driven in from Northwestern Pacific’s headquarter in the old Schellville train depot along Highway 12 in Sonoma County. He’s general manager of a freight railway with five employees, and it was his turn for the Brazos Bridge shift.

“It could be any of the five,” Park said. “We’re all qualified on the bridge.”

He pointed to a bald eagle being harassed by a seagull. Brazos Bridge is removed from the hustle and bustle of city life, though it is visible from parts of American Canyon and from city of Napa highway bridges.

From 2001 to 2011, the bridge was nothing more than gigantic piece of scenery that no longer operated. It was vandalized and its copper wiring had been stripped by thieves.

Then Northwestern Pacific arrived on the scene to carry lumber, grain and other materials between the American Canyon area and such Sonoma County locations as Petaluma. The company spent $250,000 bringing Brazos Bridge back to life.

“I couldn’t run the railroad without the bridge,” said John Williams, president of the railroad.

He foresees freight train traffic picking up as time goes by.

Whether passenger train service picks up beyond those occasional trips from Sacramento to Sonoma Raceway remains to be seen. But the tracks and bridge are owned by SMART, not Northwestern Pacific, and SMART exists to move people.

SMART plans to debut its phase one link between Santa Rosa and San Rafael in late 2016. Next, it plans to extend service south to Larkspur and north to Healdsburg and Cloverdale.

But there’s also the option of extending service into Napa County and perhaps taking some traffic off busy Highway 37. Agency General Manager Farhad Mansourian said the goal is to finish the north-south spine in Marin and Sonoma counties and then go east to Napa County.

“I don’t think I want to put any time on it,” Mansourian said. “Funding at the state and federal levels can change, and it can make something we thought long-term (happen) much quicker.”

Brazos Bridge has its roots in 1887, when Southern Pacific built a line running from Sacramento through Napa to Santa Rosa. An earlier version of the bridge was erected at that time to span the Napa River at Green Island.

On Jan. 11, 1888, the Sacramento Daily Union ran a story headlined “An Objectionable Drawbridge.” County supervisors, boaters and railroad officials traveled to the bridge to investigate complaints that it obstructed navigation.

Boat traffic was important on the Napa River in those days, with steamboats and other vessels carrying passengers and freight to the city of Napa. The Brazos Bridge had to be done just right.

In 1903, Southern Pacific built a new bridge. These early drawbridges were apparently swing bridges – instead of rising up and down, they rotated out of the way of boat traffic.

Until the late 1960s, Brazos Bridge had no electricity. A model-A Ford engine powered the span and kerosene lamps guided boats, according to Bernard Winn’s book “California Drawbridges.”

Today’s Brazos Bridge debuted on May 17, 1979. Workers spent the previous night working with floodlights to remove the 1903 swivel bridge. Tugboats at dawn pushed the new, 228-foot-long span into place between the towers.

Then workers began the final drive to ready the bridge for action. A train was due at 4 p.m.

Today’s pace is far more relaxed. Not only are there fewer trains, there are fewer boats than decades ago.

Daniel Henderson lives on Milton Road near Brazos Bridge. Before railroad workers lower the drawbridge, they blow an air horn, he said.

“I think it’s for boat traffic,” he said. “They’re lowering something that now blocks the river. It’s one of those things. We’re right off the Napa airport, too. We have some airport noise. It’s part of living here.”

But Milton Road isn’t really hidden. The western end of Brazos Bridge marks the location, serving as a reminder of the past and, just maybe, a sign of a busier railroad future.

Cheney: Jan 6 probe is not a 'political campaign'

Cheney: Jan 6 probe is not a 'political campaign'

A Northwestern Pacific Railroad train prepares to cross the Napa River on the Brazos Bridge.

Jake Park, general manager of Northwestern Pacific Railroad Co., takes in the view from the top of Brazos Bridge prior to lowering the drawbridge for a train.

A lowered Brazos Bridge as seen from Milton Road in south Napa County is ready to carry trains across the Napa River.