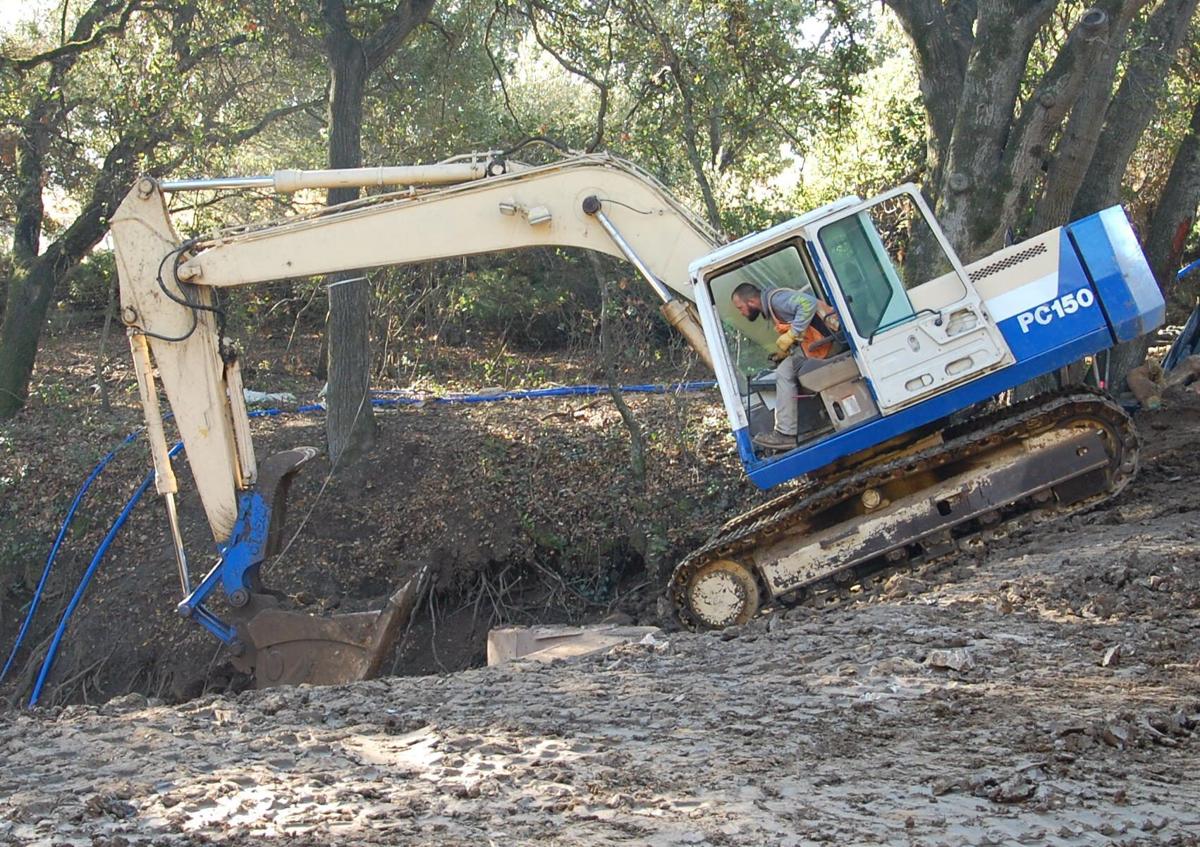 A crew on Wednesday worked on replacing the earthquake-damaged Buhman bridge along Buhman Avenue west of the city of Napa. 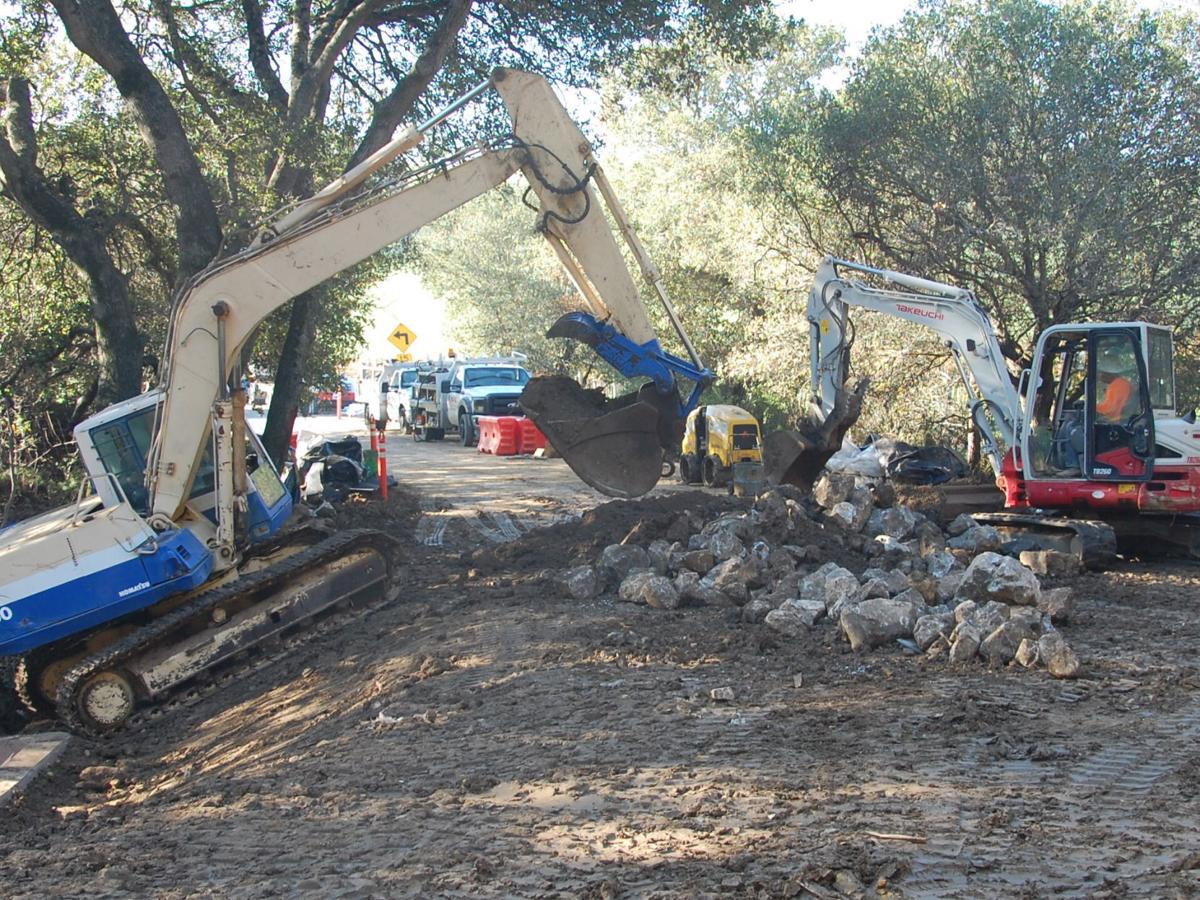 Construction crew on Wednesday work on the Buhman bridge replacement near the city of Napa. 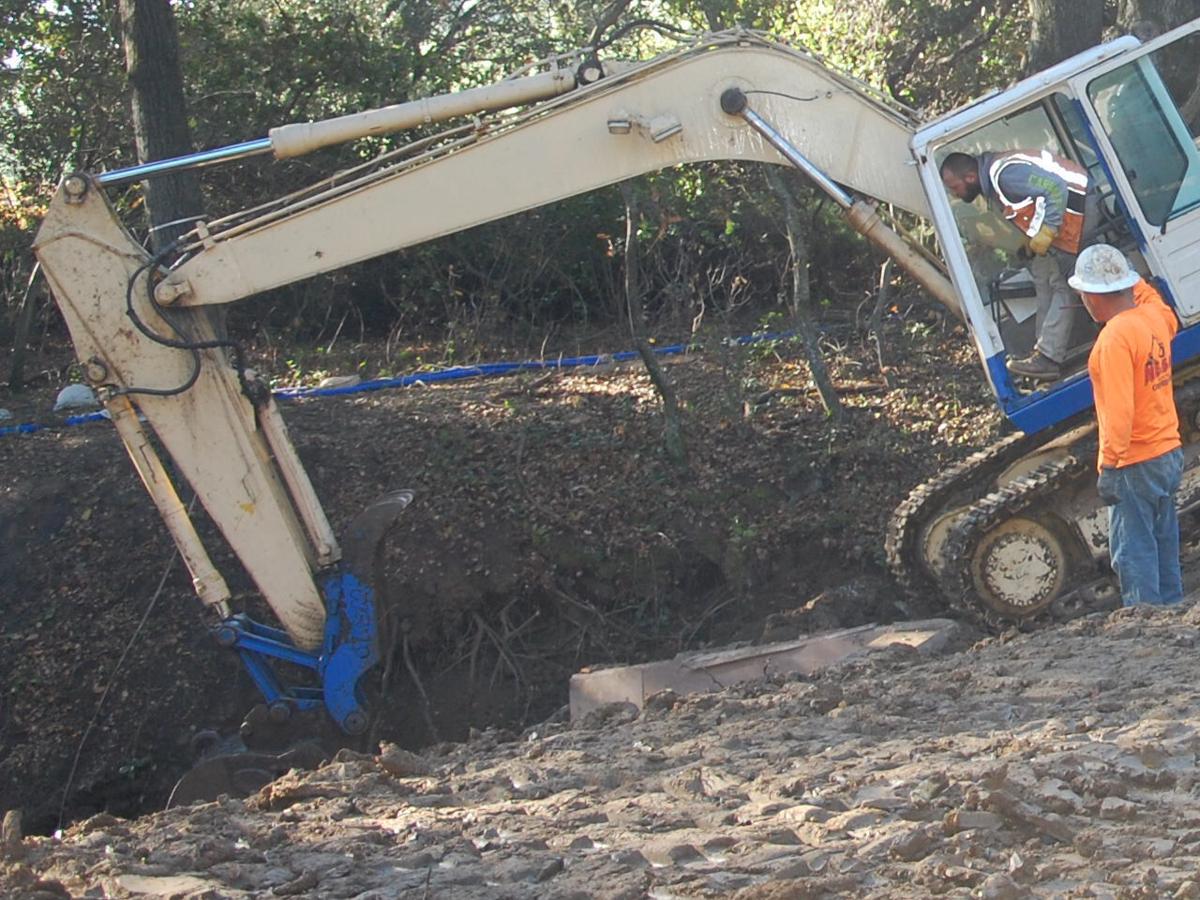 Two workers on Wednesday used heavy equipment while replacing the Buhman bridge near the city of Napa.

A rural Buhman Avenue bridge that crosses a small creek west of the city of Napa is making a $1.7 million comeback from the 2014 South Napa earthquake.

The earthquake cracked the stone-and-mortar arch culvert and caused other damage, county Public Works Director Steven Lederer said. Though the bridge remained open, the county lowered the load capacity and narrowed the lanes.

For the past few months, workers have been busy tearing out the old bridge and building a new one.

“Repairs to the existing culvert would have been more expensive and (with) no guarantee that the repairs would render the bridge able to meet current load rating standards,” Lederer said.

People in the Browns Valley area accustomed to taking Buhman Avenue to Old Sonoma Road and on to Highway 12/121 have been using a detour. But going through Congress Valley adds only a slight amount of time to the trip.

“The detour has not resulted in any traffic problems except the inconvenience of detouring,” Lederer said.

Perhaps by the end of December, barring weather-related delays, motorists will be driving on a brand-new reinforced concrete Buhman bridge that meets today’s earthquake standards. In addition, Lederer said the new bridge will have better fish passage.

Replacing bridges can be controversial in Napa County. After all, the county was once known as the County of the Stone Bridges, with the century-old structures virtually works of art.

Lederer said the modern version was a combination of stones at the bottom and mortar.

Nor is it clear when the span was built. Edmister’s book didn’t list a date. Lederer didn’t know the age.

For that matter, it isn’t altogether clear if the Buhman bridge was actually a bridge or a culvert. A culvert is a tunnel-like structure usually embedded in soil that takes water under a road. A bridge is often longer and with more open area beneath.

Lederer called the Buhman span of the creek “a bit of a hybrid.” But after a spirited discussion, Napa County settled on the term “bridge” for both the old and new structure, he said.

That’s because of the size of the structure and because the water transmission area has an open bottom rather than being in a pipe to minimize creek impacts, Lederer said.

“Chances of receiving FEMA reimbursements for these roads are low and going through the FEMA process adds to project costs,” a county report said.

On Dec. 17, 2019, the Board of Supervisors approved funding to start the Buhman bridge project. A county report said the project could take two years because of complex permitting issues associated with working in the creek.

Napa County to save an historic stone bridge, while another will be replaced

A prized but earthquake-damaged stone bridge near Calistoga can be saved.

Prince Andrew has been stripped of his titles. What happens to them now?

Prince Andrew has been stripped of his titles. What happens to them now?

A crew on Wednesday worked on replacing the earthquake-damaged Buhman bridge along Buhman Avenue west of the city of Napa.

Construction crew on Wednesday work on the Buhman bridge replacement near the city of Napa.

Two workers on Wednesday used heavy equipment while replacing the Buhman bridge near the city of Napa.