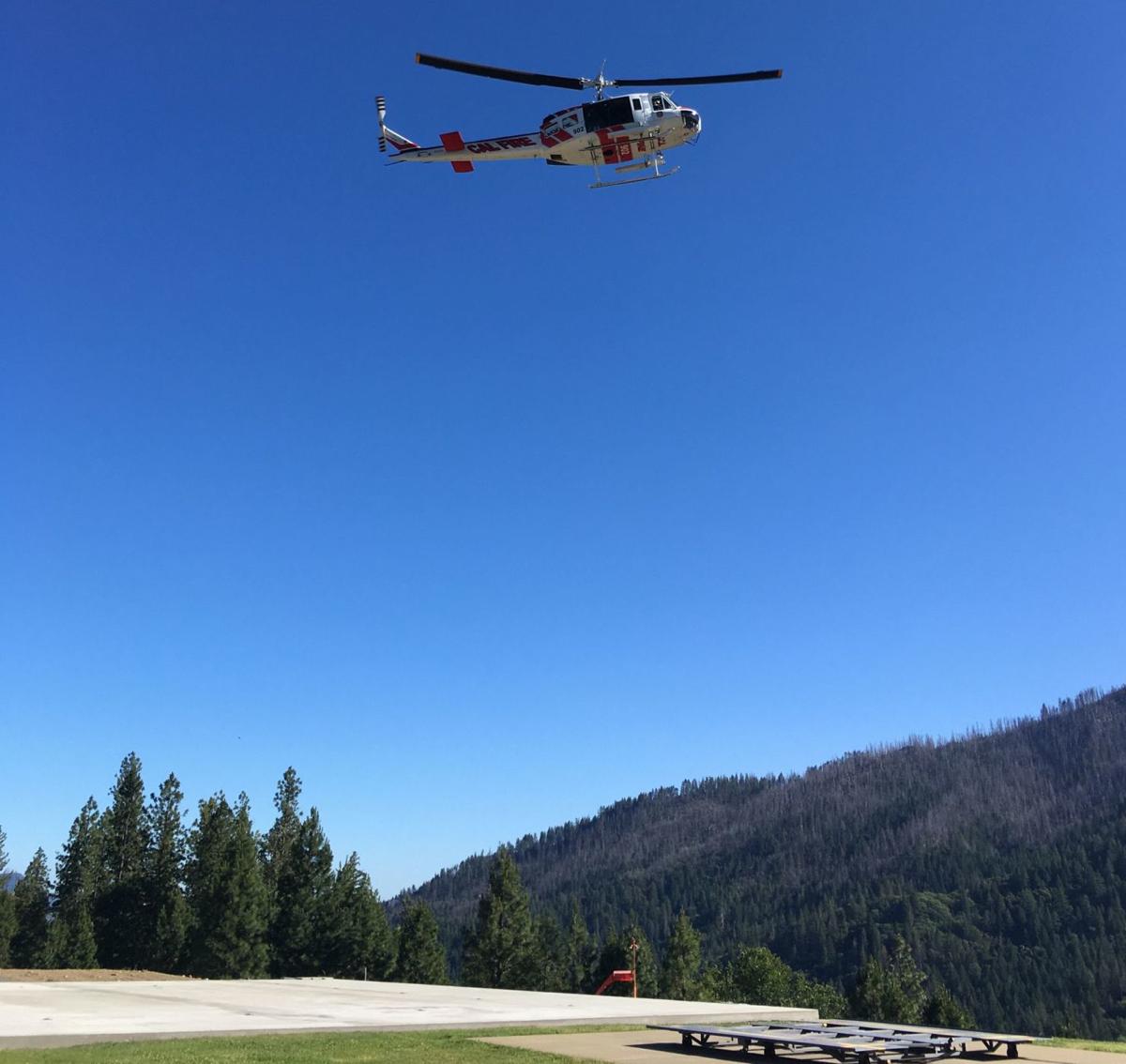 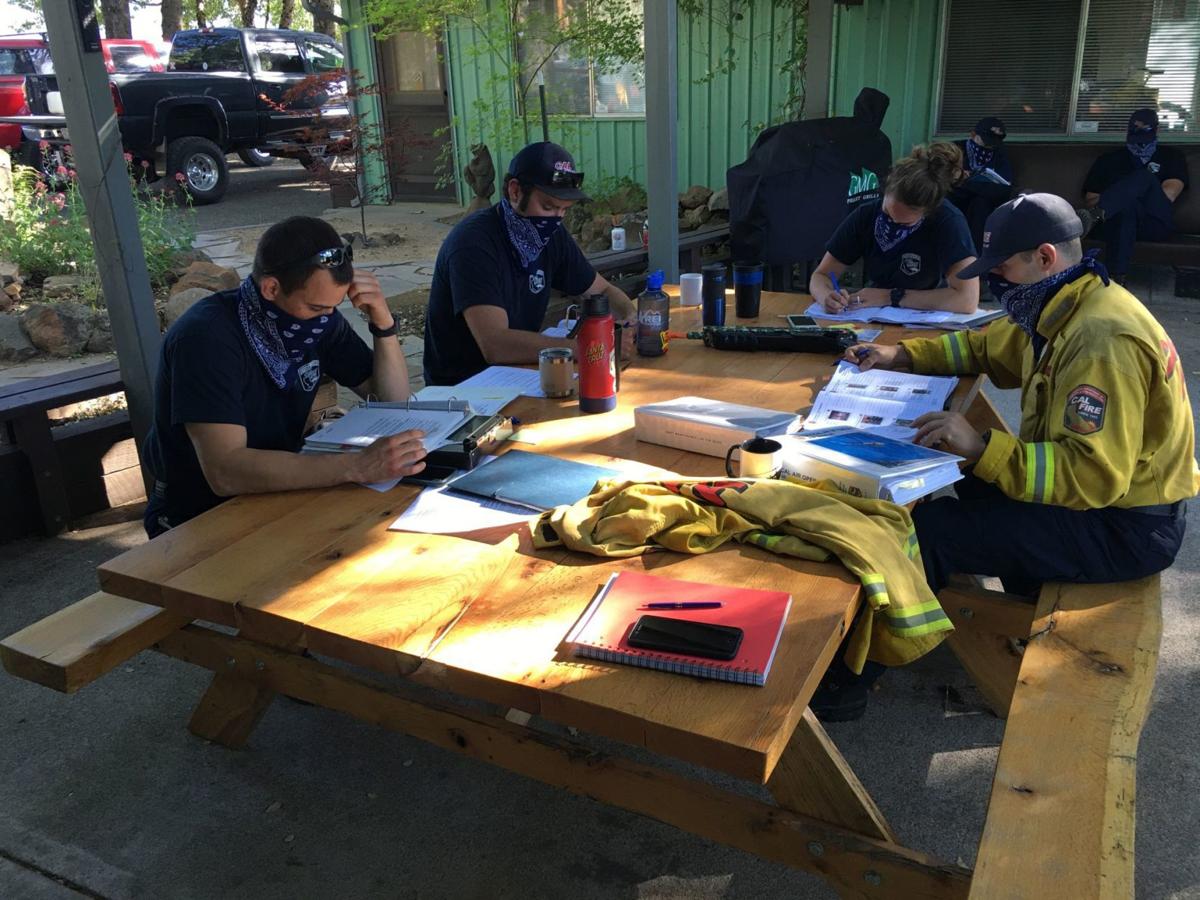 A few weeks ago, those firefighters and others gathered at the helitack base – a station where a helicopter is based — for two week-long courses. The first was the annual Basic Helicopter Operations Safety Training, consisting of 50 hours of rigorous training – “anything from hand signals to crew deployment — everything we need to be readily available to respond,” said Cal Fire’s Phil Mateer, a fire captain stationed at Boggs.

The second week was 55 hours of intense training, Mateer said, focused on air rescue and fighting fires with the helicopter.

Mateer said the air rescue component, to rescue Cal Fire personnel from the line in case of injury, was added to the helicopters’ duties after a 1984 fire in Mendocino.

“Using a helicopter in remote areas is the most efficient way to get a person off the line,” Mateer said.

A helicopter is used because of the remoteness of the area, the complexity of a person’s injuries, or because Cal Fire can’t get an ambulance close to where the injured person is.

“Typically, when we get dispatched to an air rescue, we follow up with a request for a ground ambulance or an air ambulance. We’ll perform the air rescue and then transfer (the patient) to the highest level of care,” Mateer said.

It takes about 12 minutes to reconfigure the helicopter from fighting fires to rescuing firefighters.

The week starts with a ground school and the history of the aircraft (it’s a highly-modified UH-1H helicopter, called a “Super Huey); and ends with a full complex, choreographed air rescue mission. Typically, a helicopter crew includes a pilot, a crew chief and three rescuers.

The crew chief runs the rescue scenario, coordinates with the pilot and handles the rescuers in the back.

“Everybody has to follow the process to a ‘T.’ We train all of our firefighters to do every position in the back. They learn to do rescue one and we rotate them through all the positions. Everybody learns everyone’s job,” Mateer said. “They know what I’m supposed to be doing, I know what they’re supposed to be doing.”

During the fire season, Mateer said the helicopter will respond to one fire a day and sometimes multiple fires. During the October 2017, North Bay fires, the helicopter responded to six fires in a day.

“This aircraft typically flies 300-400 hours a year, which is pretty substantial throughout the state,” Mateer said.

In the past few years, firefighters have been in “a very dynamic position, going from one incident to another, running multiple (helicopter) bases, with a lot of aircraft in the air, going through the Valley Fire with burn injuries to firefighters,” Mateer said.

The Cal Fire Super Huey rescued the four firefighters, who sustained second-degree burns in the initial attack when the fire swept over them.

“One is here today, he’s been promoted to fire captain at Delta Camp, who works with inmate firefighters,” Mateer said. “One is an engineer at the St. Helena station, one has moved on and works for a local government fire station, and the captain retired from his burn injuries.”

A Cal Fire investigation attributed the cause of the fire to faulty wiring of a hot tub at a home on Cobb Mountain.

For the upcoming fire season, Mateer said Cal Fire is expecting a continuation of seasons past — an aggressive fire season with catastrophic fires. “We have to prepare for the worst and hope for the best,” he said.

He has advice for people who are sheltering in place during the current coronavirus COVID-19 pandemic: Go cut brush. Make your address visible. Evacuate when you’re told. Take time now to prepare.

Mateer has been stationed at the Boggs Mountain Helitack Base for the past five and a half years and before that spent 10 years with the Cal Fire station in Middletown. Mateer said it’s been “very challenging but a rewarding career.

“I work with some amazing people throughout the state and it is an amazing department to work for. I’m honored to wear the patch, honored to be a part of this base and this community, to do what we do and strive for the best.”

Clad in their orange uniforms and hardhats, inmate firefighters are preparing for the upcoming fire season with crew readiness drills here in Napa.

Reunion brings survivors and rescuers together

Strong winds and dry conditions have prompted a National Weather Service red flag warning for elevations 1,000 feet and above in Napa County a…