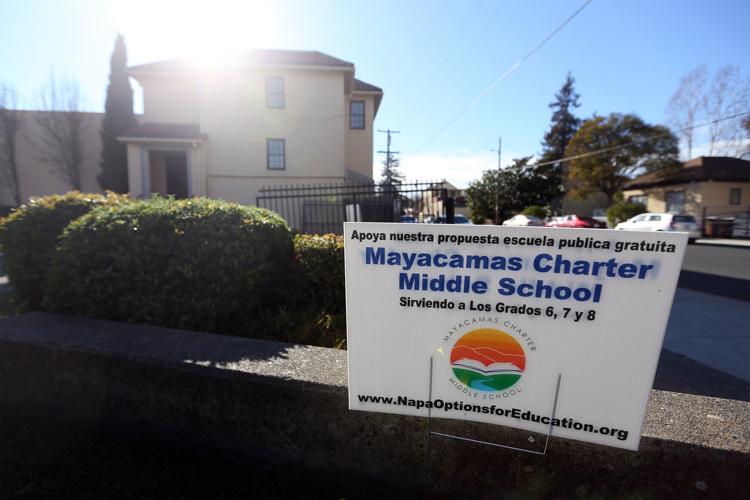 A sign promoting the proposed Mayacamas Charter Middle School is posted a short distance in front of the former home of St. John the Baptist Catholic Church, a parochial school on Napa Street that closed in June 2020. 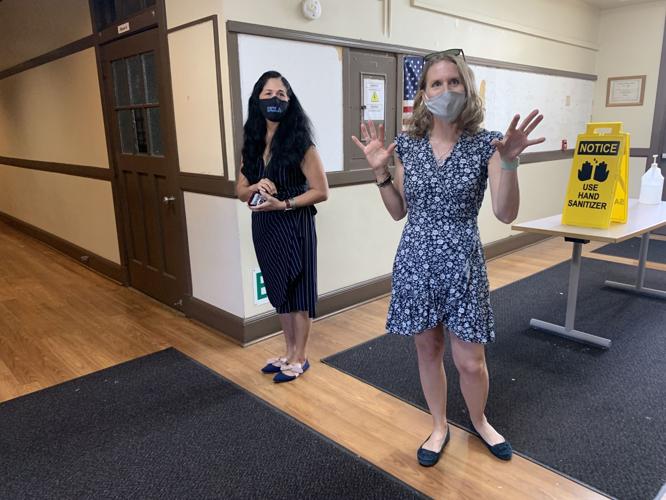 Lauren Daley, right, and Jolene Yee of the Napa Foundation for Options in Education inside the defunct St. John the Baptist Catholic School building, which they have proposed as the home of the Mayacamas Charter Middle School.

Updated at 4:44 p.m. Thursday — The twice-denied Mayacamas Charter Middle School will likely be coming to downtown Napa, after the California State Board of Education decided Thursday, on a 6-5 vote, that the Napa Valley Unified School District board and the Napa County Office of Education board abused their discretion in denying the school a charter.

Specifically at issue was the process behind the denial by NVUSD — which is supposed to be “fair and impartial" — and that the county office hadn’t sufficiently established evidence that the Mayacamas school would substantially undermine programs and services at NVUSD by sapping funding from the district.

The decision was made despite a recommendation from the state Department of Education to uphold the local district decisions, due to a lack of detail and specific citations to the documentary record in the Mayacamas supporters’ appeal.

By a unanimous vote of the state board, the NCOE was also assigned oversight of the school, which was proposed to serve as a grade 6-8 academy that would operate in the former St. John the Baptist Catholic School building at 983 Napa St. Don Huffman, president of the NCOE board, said in a statement that the board trustees will be reviewing the findings of the state board with legal counsel and staff, and considering next steps.

The decision was the culmination of a four-hour meeting filled with dozens of public comments from people who expressed either support or opposition to the Mayacamas charter school.

The Tuesday vote was the second setback for the proposed charter academy, which the Napa school district vetoed in December.

That included several Napa parents. Kim Smith, for example, said she supported Mayacamas because she believed the district had handled its declining enrollment and finances badly, and that Mayacamas would offer a middle school learning environment not available elsewhere in NVUSD.

“This is a great charter; I’ve read the report,” Brown said. “It’s sensitive to low-income people and charges of racism are outrageous. The bottom line here is legally, the denials are arbitrary. This is a good school and the county staff noted how valuable it would be.”

Many others urged the state board not to approve the charter school.

Clare Crawford, a senior policy advisor with In The Public Interest — a nonprofit research and policy organization that’s published several analyses on the financial impacts charter schools have on school districts — said the denials were clearly tough decisions the two school boards were required to take to ensure financial stability. Cassie Mancini, legislative advocate at the California School Employees Association, also argued that petitioners had not offered sufficient evidence to justify overturning the two previous denials.

“I will emphasize the board should consider the intent of AB 1505, to give deference to local communities and local decision makers,” Mancini said. “The abuse of discretion must be so egregious that the charter otherwise would have been granted. That is clearly not the case here.”

Several state board members noted the difficulty the decision posed, given that they were operating under a new process established by Assembly Bill 1505. The law restricted the state board’s review — which used to be comprehensive — to determining whether abuses of discretion in the processes carried out by local and county school boards justify overturning their decisions.

NVUSD's seven trustees all voted against the petition, which would have created a self-governing middle school in time for the 2022-23 year.

Board member Sharon Olken — director and longtime employee of a charter school network in San Francisco — largely led the charge to overturn the NVUSD and NCOE denials, saying she wasn’t convinced it was possible for a charter school to receive a “fair and impartial decision” from NVUSD, and that she believed there was an element of intimidation in the process toward the Mayacamas petitioners. She noted NVUSD’s review of the petition was harsh compared to the NCOE’s, which she said led her to suspect the NVUSD process as a whole.

“While it is not our job to decide who is right, this difference points to a significant bias,” Olken said at the meeting. “In my opinion, the district process as a whole was an abuse of discretion.”

Olken also cast doubt on the estimated financial impacts the charter school would have — by pulling students, and thus attendance-based funding, from the district.

According to the findings adopted by NUVSD and the county board, the district is projected to see its student population drop 17% over the next 10 years, and Mayacamas would bring about a reduction of 19% instead. The findings state that increased loss would likely exacerbate the need to close more district schools, result in cutbacks to programs and services, and cause the district to reduce its teaching staff by 34 over the first five years of the Mayacamas school’s operation, among other cuts.

“These assertions seem overstated and intended to intimidate Mayacamas, particularly in this era where there’s more funding going to public education,” Olken said at the meeting. “It is for these reasons that I do feel an abuse of discretion occurred at the county and district levels.”

Linda Darling-Hammond, president of the board, said she was “empathetic with the fearfulness” that messaging around the threat the charter school poses to NVUSD resources could have resulted in. She also noted that the NVUSD and NCOE findings didn’t match up, and that there appears to be a need for a new charter middle school given the recent shuttering of former charter River Middle School, which was merged into NVUSD in 2019. (The former campus has now been taken over by Unidos Middle School, a dual-language English-Spanish academy.)

Darling-Hammond also noted that adding the charter school would obviously cause a financial impact to NVUSD — as it would in any other district — but she questioned whether the financial impact would be significant given increased state spending on education.

Some of the other board members expressed that they supported the denial decisions, and the board only fell one vote short of moving forward with affirming those decisions.

“This is clearly a decision by both a local district and county board I feel has followed the law,” said board member Gabriela Orzco-Gonzalez at the meeting.

Board vice president Cynthia Glover Woods said there were evidently strong feelings and passions on both sides of the issue. But she noted that the board needed to make its decisions based on the documentary record, and not their own opinions about whether or not the charter school was a good idea.

The Mayacamas Charter Middle School petition, denied twice by local school boards, head to a state board Thursday for a third, and likely final, hearing.

About 8,000 people with connections to NVC recently received letters informing them their personal information may have been accessed while the school responded to a June cyberattack.

Many of Napa's unhoused residents have borne the brunt of the current heat wave, though they've been supported by outreach efforts.

The city of Napa's Planning Commission on Thursday recommended that the Linda Vista extension be erased from the city's draft general plan, and that the Foster Road area be designated as a greenbelt.

Read through the obituaries published in Napa Valley Register

The National Hockey League locked out its players at 11:59 p.m. EDT; it was the league’s fourth shutdown in a decade and one that would cost t…

The city of Napa's Planning Commission on Thursday decided to approve a Dish Wireless antenna installation, though they expressed reservations about the effect RF emissions could have on health.

In reviewing the draft general plan Tuesday, the Napa City Council will ponder a Planning Commission recommendation to rezone the Foster Road area to a greenbelt, which could trigger legal action.

Construction on the 588-bed River Trail Village student housing complex started up last month, and about 50 local officials gathered at the active construction site Wednesday to celebrate it.

Citing the great need for more housing in Napa, the Napa City Council rejected a Planning Commission recommendation to rezone the undeveloped Foster Road area to a greenbelt.

A sign promoting the proposed Mayacamas Charter Middle School is posted a short distance in front of the former home of St. John the Baptist Catholic Church, a parochial school on Napa Street that closed in June 2020.

Lauren Daley, right, and Jolene Yee of the Napa Foundation for Options in Education inside the defunct St. John the Baptist Catholic School building, which they have proposed as the home of the Mayacamas Charter Middle School.