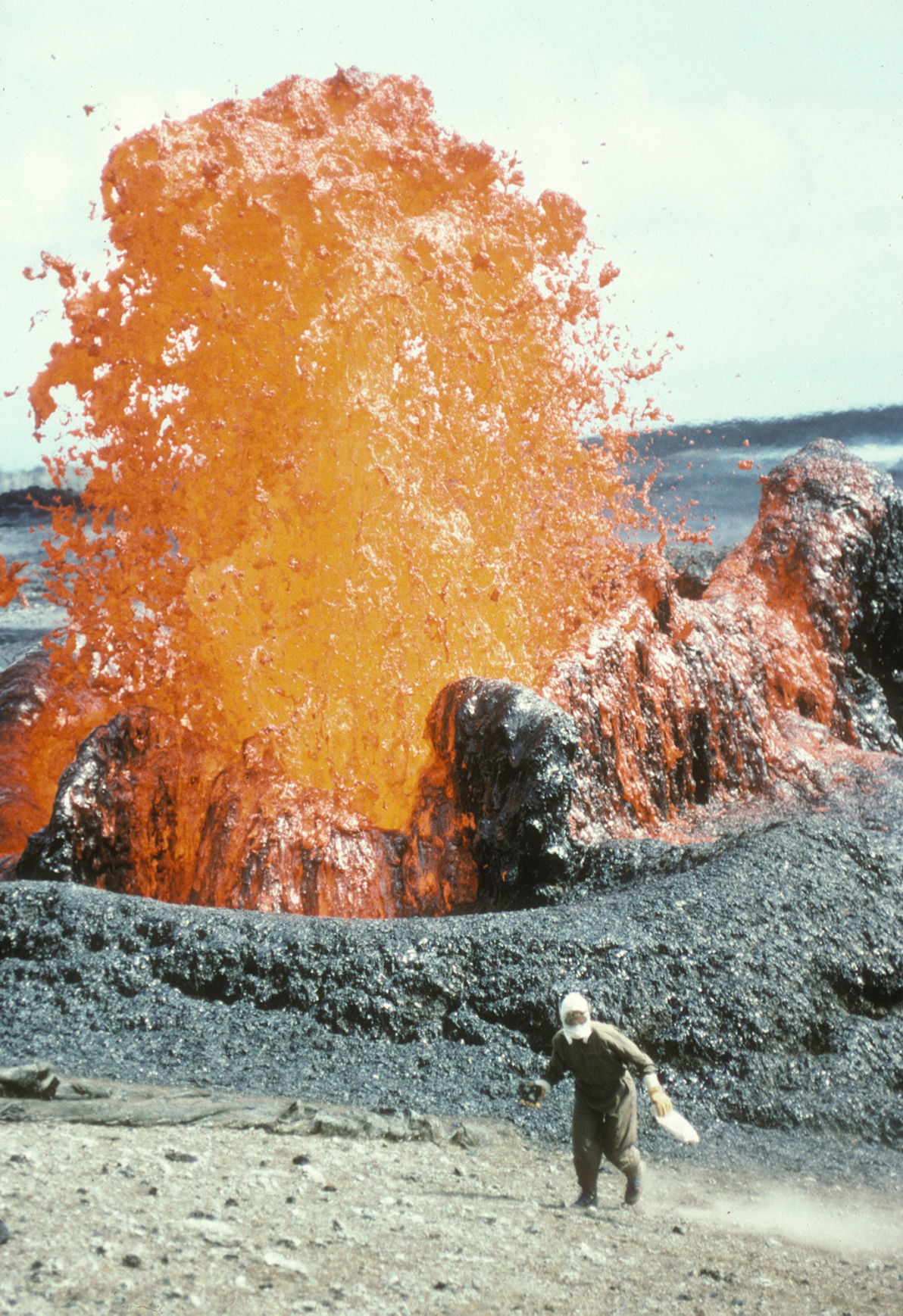 Margaret Mangan, middle, now scientist-in-charge of the USGS California Volcano Observatory, visits the island of Monserrat during a 1997 eruption of the Soufriere Hills Volcano. 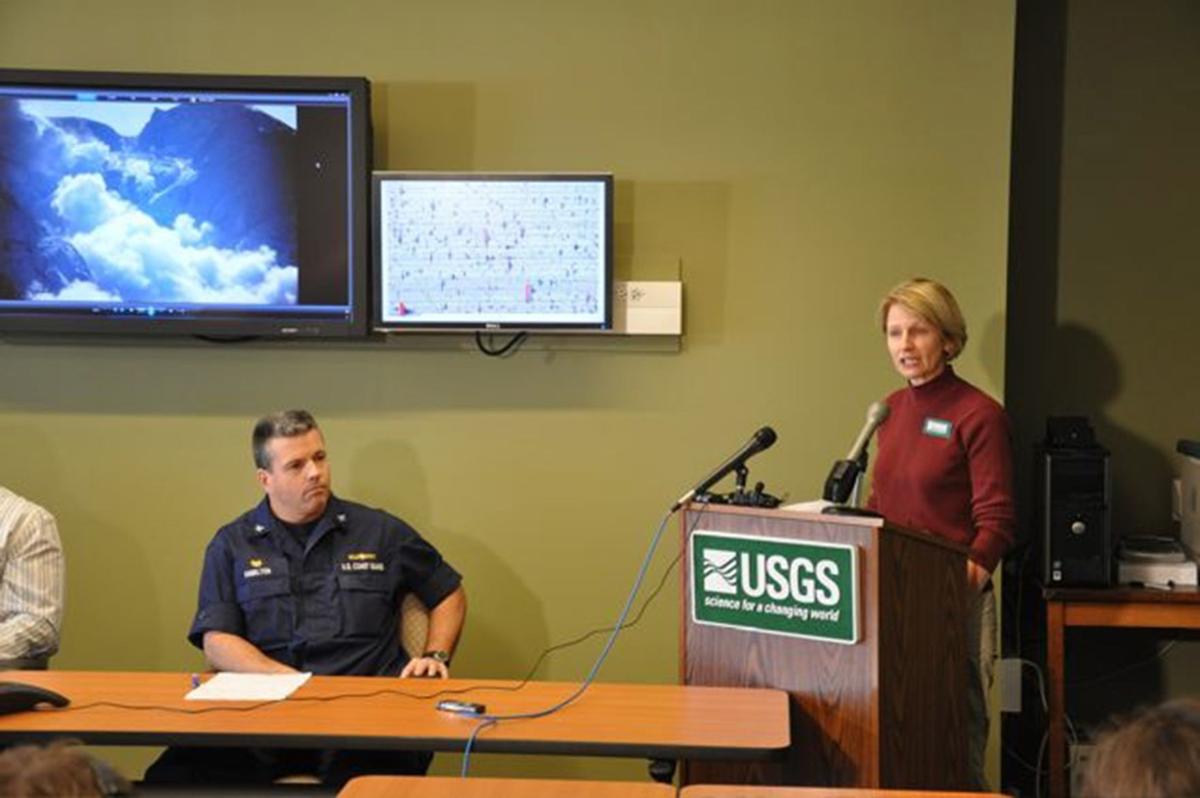 Margaret Mangan gives a media briefing during a 2009 eruption of Redoubt Volcano, Ala., while on detail with the USGS Alaska Volcano Observatory. 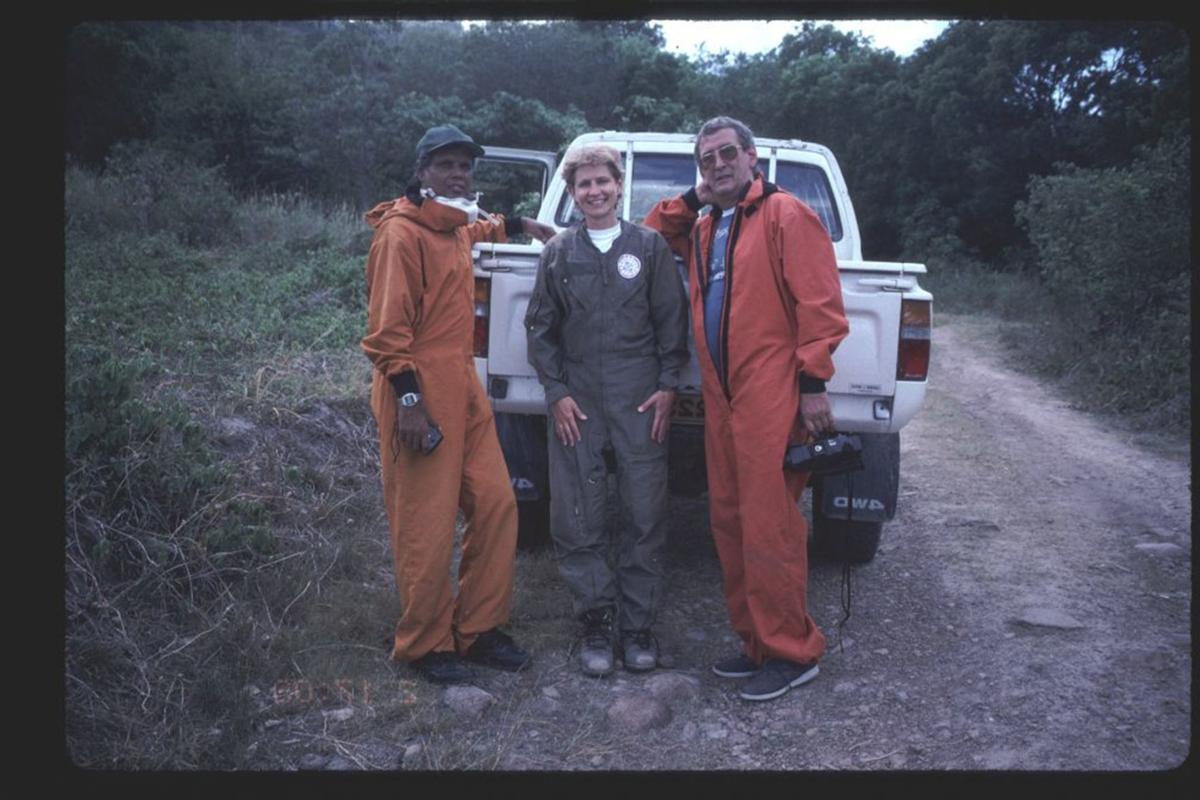 Margaret Mangan, wearing full protective gear, collects lava samples during a 1993 eruption of Kilauea in Hawaii. The samples help scientists understand the conditions below the volcano and are needed for forecasting.

Margaret Mangan, middle, now scientist-in-charge of the USGS California Volcano Observatory, visits the island of Monserrat during a 1997 eruption of the Soufriere Hills Volcano.

Margaret Mangan gives a media briefing during a 2009 eruption of Redoubt Volcano, Ala., while on detail with the USGS Alaska Volcano Observatory.

Margaret Mangan, wearing full protective gear, collects lava samples during a 1993 eruption of Kilauea in Hawaii. The samples help scientists understand the conditions below the volcano and are needed for forecasting.

California is famous for its catastrophic earthquakes and wildfires, but they are not the state’s only natural hazards. As head of the observatory, or CalVO, Mangan has drawn attention to the state’s more overlooked threats: a dozen restive volcanoes that stretch from Medicine Lake near the Oregon border to the Salton Buttes in the Coachella Valley.

“Most people are surprised that there are any volcanoes in California,” said Kari Cooper, a geologist at the University of California, Davis. “It’s just really not on people’s radar.”

It should be. According to a report Mangan and her colleagues released this year, the risk of a small-to-moderate eruption somewhere in the state over the next 30 years is 16% _ about the same as for a magnitude 6.7 or greater earthquake along the San Andreas Fault.

Those odds are “not something to ignore,” she said.

For Mangan, the threat of a volcanic crisis is not merely hypothetical.

She began her career at the USGS’ Hawaii Volcano Observatory in 1990, just as Mount Kilauea began to pave over the town of Kalapana on the Big Island. It was the first time she had seen an eruption with her own eyes.

“For a volcanologist,” she said, it was “almost a religious experience.”

The event also drove home the degree of devastation a volcano can cause _ and made her realize how important it is for people living in volcanically active areas to know what could happen. “I’ve seen what it can do to communities,” she said, “and the psyche of people that are faced with these things.”

Mangan came to California in the late 1990s to work at what was then called the Long Valley Volcanic Observatory.

Long Valley lies on the east side of the Sierra Nevada _ the mountains themselves the roots of ancient volcanoes _ and it drew scientists for good reason: In 1980, just a few days after Mount St. Helens blew its top, Mammoth Mountain started to show signs of unrest. (It eventually settled down, damaging nothing more than real estate values.)

The Long Valley research team also monitored the area’s other volcanoes, which were equally _ if not more _ concerning. That included the relatively young Mono Craters, which last erupted in the middle ages, and the Long Valley Caldera, which produced a supereruption that splattered ash across the southwestern U.S. 760,000 years ago.

Mangan took over the observatory in 2009. She and her staff used seismometers to listen for magma rumbling up through the crust and tracked the elevation of the ground, which can swell when magma begins to pool beneath a volcano. They also measured volcanic gases seeping through vents for clues about what was happening underground. (The answer is still not much.)

The eastern Sierra isn’t the only volcanically active region in the state. Seven other volcanoes made the most recent USGS watch list, including Mount Lassen and Mount Shasta in the north (very high-risk volcanoes); the Medicine Lake volcano, the Clearlake Volcanic Field near Napa and the Salton Buttes (high risk); and Death Valley’s Ubehebe Craters and the Coso Volcanic Field (moderate risk).

Mangan proposed bringing them all together under a unified California Volcano Observatory, and she took charge when CalVO opened in 2012.

In that role, she tried to alert people to the dangers of volcanoes while sharing her fascination with them.

“One of the reasons the state is so gorgeous is that there are volcanoes here,” she said.

In 2010, the Icelandic volcano Eyjafjallajokull produced a modest eruption. It released a quarter as much ash as Mount St. Helens, causing zero deaths and minimal damage. But the eruption brought European air traffic to a halt for a week, stranding millions of passengers, including the mother of an employee at the California Governor’s Office of Emergency Services. It prompted the agency to realize that the same thing could happen in California _ and that the state wasn’t prepared.

When CalOES asked for help, Mangan was thrilled. It was exactly the kind of thing she created CalVO to do.

Over the next few years, she led a team that assessed California’s volcanoes and the hazards they pose. The analysis contained some sobering results.

Roughly 200,000 people live in or visit the state’s volcanic hazard zones every day, and 45,000 of them are close enough to be exposed to threats like deadly blasts of hot gas and rock, lava flows, and volcanic mudslides.

Unlike earthquakes, which are over in a matter of seconds, volcanic eruptions can drag on, said Marcus Bursik, a geologist at the University of Buffalo who has worked extensively in California. “They persist for quite a long time _ over years if not decades.”

As with Eyjafjallajokull, even a small paroxysm could snarl air travel. Planes regularly fly over California’s volcanoes, ferrying up to 300,000 passengers to, from and along the West Coast every day. Each year, millions more people drive through the Mount Shasta hazard zone on Interstate 5 between Redding and the Oregon border.

The indirect effects of an eruption could spread ever farther, Mangan and her colleagues found.

Thousands of miles of high-voltage power lines bound for major population centers cross through hazard zones, particularly in the northern part of the state. These could short out if covered in wet ash, leaving consumers in the dark for weeks.

A natural gas pipeline snakes between Shasta, Lassen and Medicine Lake, supplying 4.2 million homes. And many of the state’s water reservoirs lie within the ash fall zones of various volcanoes, the report noted. “Even a small eruption in the wrong place could take out large swaths of California’s infrastructure and really cause problems for people who are hundreds of miles away,” Cooper said.

California’s Office of Emergency Services is now developing volcano response plans for the state and its vulnerable cities and counties.

“A lot of it is getting out of the way,” said Kevin Miller, manager of the earthquake, tsunami and volcano program at CalOES.

Many communities are already working on evacuation procedures for wildfires, and these could be put to use in a volcanic crisis, emergency managers say. For instance, Siskiyou County _ home to Mount Shasta _ has coordinated with the California Highway Patrol on a plan to commandeer both directions of I-5 if necessary.

CalOES is adding volcanoes to its MyHazards website, which allows residents to enter their address and get information about local threats, along with advice on how to deal with them.

Communities can also increase their resilience by fortifying critical equipment, like electrical substations, with protective shields and closing air intakes to keep ash out of buildings.

These efforts build on the groundwork Mangan laid over the last few years. She has crisscrossed the state, meeting with local officials to help them grasp what an eruption in their backyard would really mean. At one stop, she persuaded Frank Frievalt to consider stronger safeguards for Mammoth Lakes, where he’s the chief of the fire protection district.

Since ash damages electronics and interferes with radio signals, Frievalt realized a top priority would be to bring in extra repeaters. “That happens all the time on wildfires,” he said. “In this case, we’d have to figure out a way to make them more resilient to an ash environment.”

Mangan has also worked with the Federal Emergency Management Agency to develop a California-specific version of its volcano crisis awareness training that includes a mock eruption exercise.

In 2015, Mangan coordinated an exchange between scientists, emergency responders and land managers in California and Chile, so they could learn from one another about the challenges of living in the shadow of active volcanoes. On their trip, the Californians witnessed the aftermath of an eruption in the town of Chaiten, where a volcano roared to life in 2008 and unleashed a mudflow that buried homes up to their windowsills.

“I’ve never been to a place that was totally decimated,” said Carolyn Napper, a ranger at the Shasta-Trinity National Forest who participated in the program.

Jim Richardson, the superintendent of Lassen Volcanic National Park, knew he was in good hands with Mangan keeping watch over his territory. (Lassen last erupted in the early 1900s, sending a slurry of melted snow and mud racing down a nearby river valley and lofting ash all the way to Elko, Nev.)

One Saturday afternoon last year, Richardson was sitting on his couch when he felt the house rattle. “That was an earthquake!” he said to his wife.

As he was checking the USGS website, he got a phone call from Mangan. There was nothing to worry about, she assured him. It was just the volcano talking in its sleep.

Richardson had come to rely on her not only for her technical expertise, but her ability to translate it into useful guidance for managers like him. “She has been our No. 1 go-to in-person person,” he said.

Starting Sunday, it will no longer be Mangan calling when a volcano shudders. She is retiring after 36 years with the USGS, including seven at the helm of CalVO.

“I’ve raised the awareness,” said Mangan, 65. Now it will be up to her successor and the state to get prepared.

Coffey Park is rebuilding quickly: The community organization Coffey Strong says more than half of the 1,200 homes that burned down in 2017 are finished, and hundreds more are under construction.