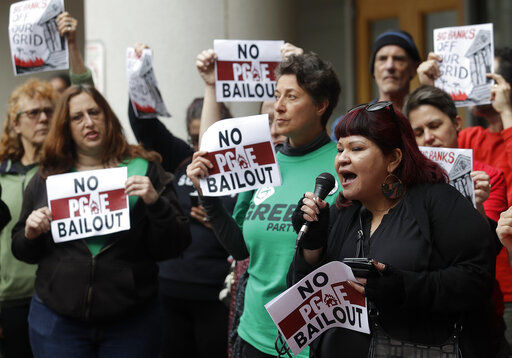 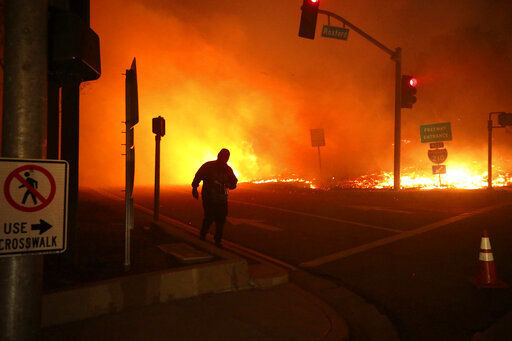 A bystander watches the Saddleridge Fire in Sylmar. 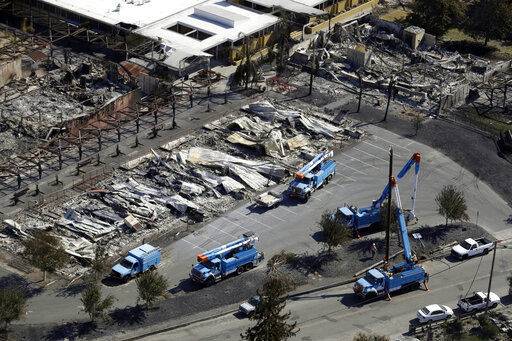 Pacific Gas & Electric crews work on restoring power lines in a fire ravaged neighborhood in the aftermath of a wildfire in Santa Rosa. 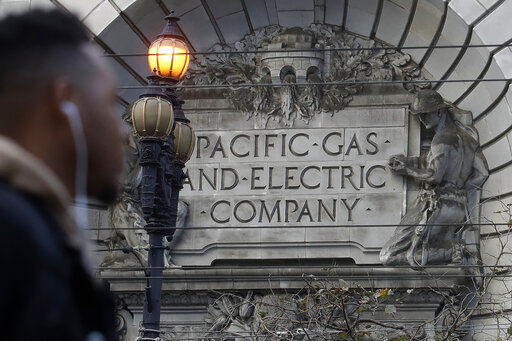 A sign to a Pacific Gas & Electric building is shown in San Francisco.

The request by Assemblyman Adam Gray could turn up the heat on the commission as it prepares to play a key role in determining PG&E’s future.

The nation’s largest utility has submitted a rehabilitation plan that must be approved by the commission and a federal bankruptcy judge by June 30 to qualify for coverage from a special fund state lawmakers created to help insulate California utilities from massive losses if their power lines ignite more devastating fires.

PG&E landed in bankruptcy nearly a year ago after a series of wildfires blamed on the utility in 2017 and 2018 killed nearly 130 people and destroyed nearly 28,000 homes, raising the specter that it might be asked to pay more than $50 billion in claimed losses.

Gray, a Democrat from Merced, thinks it’s time for his fellow lawmakers to assign the state auditor to dig deeper into the commission and analyze “what went wrong” at an agency that can sometimes seem arcane to the millions of Californians who depend on it to set the prices they pay for electricity and natural gas.

PG&E deserves plenty of blame for neglecting to upgrade its power system during the past decade as climate change increased wildfire risks, but “government incompetence is also part of the story,” Gray said in a statement. He asserted the commission “knew about the decaying and outdated condition of PG&E’s infrastructure, yet they failed to act.”

The commission did not immediately respond to requests for comment.

Things have gotten so bad that PG&E now resorts to deliberately turning off power in some areas in hot, dry and windy conditions to reduce the chances of causing even more fires, a tactic it used eight times in 2019, affecting as many as 2 million people at some points and keeping the electricity off for several days in parts of its sprawling service territory.

The commission is conducting an investigation into how the utility handled those power shutoffs, a practice management expects to rely upon for at least several more years each summer and autumn.

It isn’t the first time the commission has been accused of falling down on the job and contributing to the problems facing PG&E. But the findings of a state audit could prod state lawmakers to propose drastic reforms of the century-old agency.

Perceived shortcomings at the commission have already prompted three different governors to overhaul the regulator since PG&E first sought bankruptcy protection from 2001 to 2004. Last summer, California Gov. Gavin Newsom appointed a new commission president, Marybel Batjer, a former casino executive before she served as an operations administrator in state government.

PG&E got out of bankruptcy the first time after working out a plan, much of it in secret, with the commission president at that time, Michael Peevey, a former executive at another utility. That deal was widely criticized by consumer advocates, who called it an unmerited $7.2 billion bailout that required PG&E’s customers to pay higher electricity rates.

The decision on whether to open a commission probe will now fall to the Joint Legislative Audit Committee. The 14-member committee is evenly split between the Assembly and Senate, but consists of nine Democrats and five Republicans. Democrats have a supermajority in both houses.. The five Republican members are outnumbered by the nine Democrats. The committee is expected to consider Gray’s request on Feb. 19.

A consultant tabulates the economics impacts of the 2019 fire and power shutoffs on Sonoma County.

No. 7 story for 2019: Napa County saw deluges and fire danger

Consumers are now more likely to be on the hook for wildfires caused by California utilities.

Pacific Gas and Electric is removing its generators from Calistoga now that the 2019 fire season appears to be over.

The governor wants nearly half a million dollars per year to fund the Native American council he created in June.

A bystander watches the Saddleridge Fire in Sylmar.

Pacific Gas & Electric crews work on restoring power lines in a fire ravaged neighborhood in the aftermath of a wildfire in Santa Rosa.

A sign to a Pacific Gas & Electric building is shown in San Francisco.