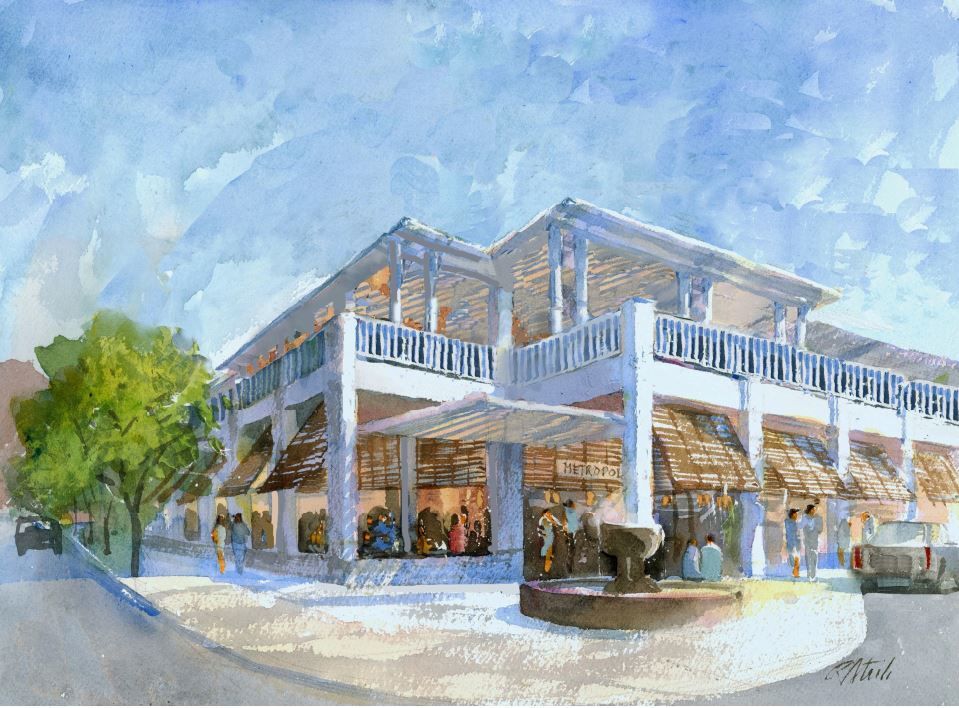 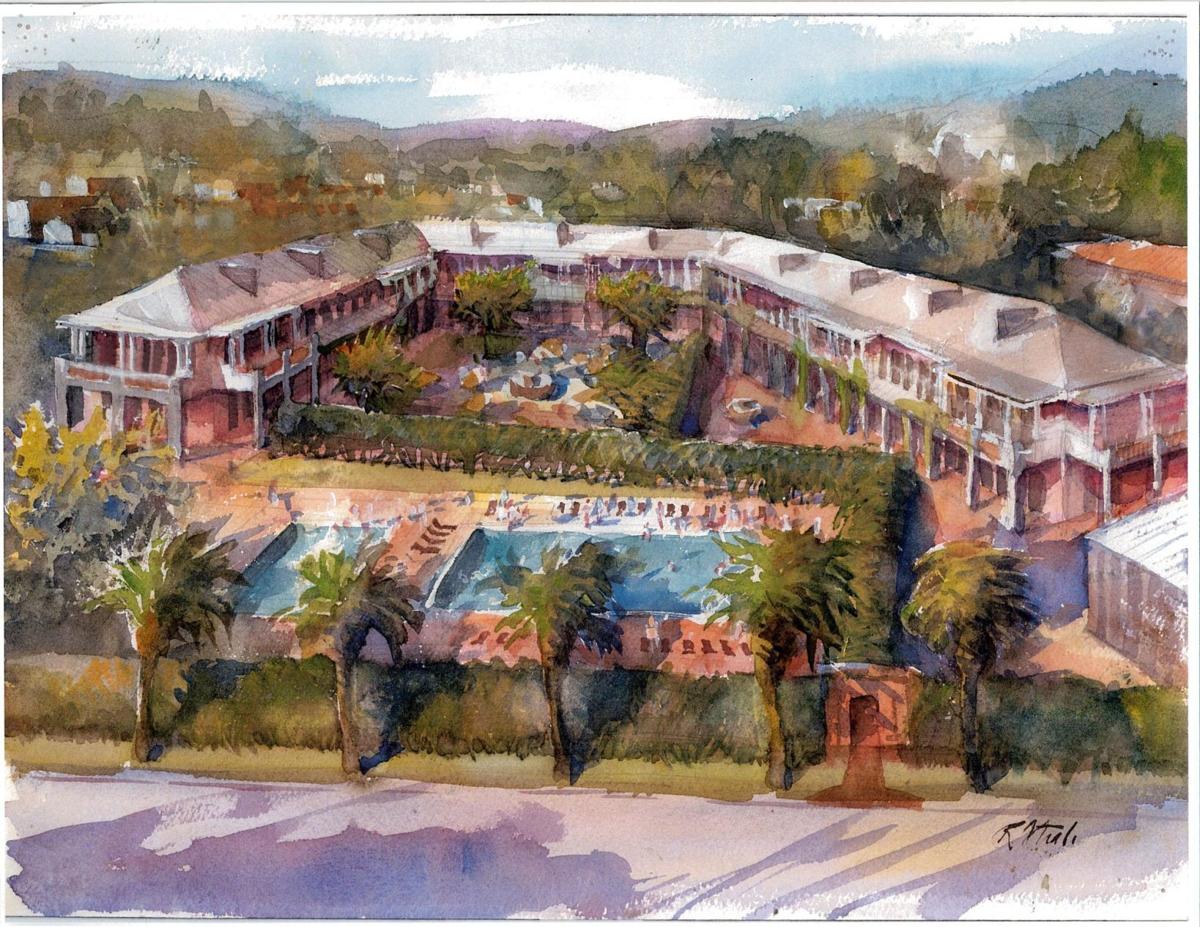 An artist's rendering of the Veranda Hotel at Indian Springs

The Veranda at Indian Springs will be an expansion of the nearby Indian Springs Resort, also owned by the Merchants, featuring a 2-story, 96-room hotel, restaurant and bar, bike paths, an emergency access and evacuation road, and lush landscaping, all fronted by a pedestrian friendly promenade.

Plans for the project were unanimously approved the Planning Commission last month, with the abstention of Chair Paul Coates, who has previous ties to the project.

Since first introducing the hotel project to the city in 2011, the Merchants have revised plans and scaled down the hotel from the original 176-room, three-story hotel, after seeking community comments at numerous meetings.

“The family wants to continue to transform an empty downtown block into something amazing,” said Danny Merchant. “We’re excited to bring forward a project that has had so much community input and now carries a tremendous amount of community support, and will bring so much community benefit.”

The new hotel complex will be located on seven acres at the Gliderport property, on the corner of Lincoln Avenue and Fair Way. The hotel will feature a rooftop lounge, two geothermal pools, about 5,200-square feet of ground floor retail space, and off-street parking for 233 vehicles.

The project also calls for 800 feet of bike paths, public restrooms, and once the Vine Trail is completed Upvalley, the Veranda property will be the landing place and gateway to Calistoga.

The project will also infuse the city with millions of dollars in sewer and water improvements, and half an acre will be donated toward affordable housing, Merchant said.

An emergency vehicle access and evacuation road will also extend behind the property, between Fair Way Extension and Magnolia Drive to the nearby mobile home parks, which can also be used in case of evacuation.

Seven existing, single-story structures on the property will be demolished prior to construction, including the town’s only laundromat. The city received more comments about the laundromat than any other aspect of the project, said Vice-Chair Tim Wilkes.

The Merchants plans include building a new laundromat at a yet-to-be determined location. As a provision in approving the plans, the commission asked that the new laundromat be open and operational before the old one is demolished.

With an eye on the future, commissioners also discussed the impact of increased vehicle and pedestrian traffic on the corner of Lincoln and Fair Way, with regard to traffic exiting Cal Mart, and Dr. Wilkinson’s Hot Springs across the street which is nearing completion of renovations.

Visitors have been pumping up Napa's economy for 150 years

The first Napa Valley tourists came for the mineral water and hot springs.

Is Napa's wine-based economy too one-sided? Some argue for diversification

Napa County's economic dependence on wine has some wondering if a little more economic diversity would be good.

Decorate your home and join the Calistoga Halloween Spirit Map

The Calistoga Art Center and Calistoga Parks and Recreation is getting together a map of homes in Calistoga that are decorating for Halloween.

The Napa Valley Vine Trail Coalition has teamed up with 10 Napa Valley wineries to produce a 10-bottle collection of Cabernet Sauvignon-based wines in support of the Vine Trail.

It’s off to a late start due to the Glass fire, but work has begun on the new bridge connecting Pioneer Park with the Community Center and the downtown area.

This annual Veterans Day tradition is being modified due to COVID-19.

Napa County eased COVID-19 restrictions on businesses and activities on Tuesday, however, Calistoga is still seeing a high percentage of cases.

The Planning Commission will hear Lawer Estates' proposal to turn the empty Brannan's building into a restaurant, tasting room, and demonstration winery.

The Jean-Charles Boisset Collection has added another historical property to its stable of Napa Valley landmarks. The sale of the Calistoga Depot was finalized just weeks after JCB’s plans to renovate the interior of the property were approved by the city.

Tweed proving itself as a sustainable fabric in high demand

Tweed proving itself as a sustainable fabric in high demand

An artist's rendering of the Veranda Hotel at Indian Springs