World Series: Follow updates as Dodgers and Rays face off in Game 5

Camper Culture: For some Napa County evacuees, 'home' now has four wheels
Share this
{{featured_button_text}}
1 of 4 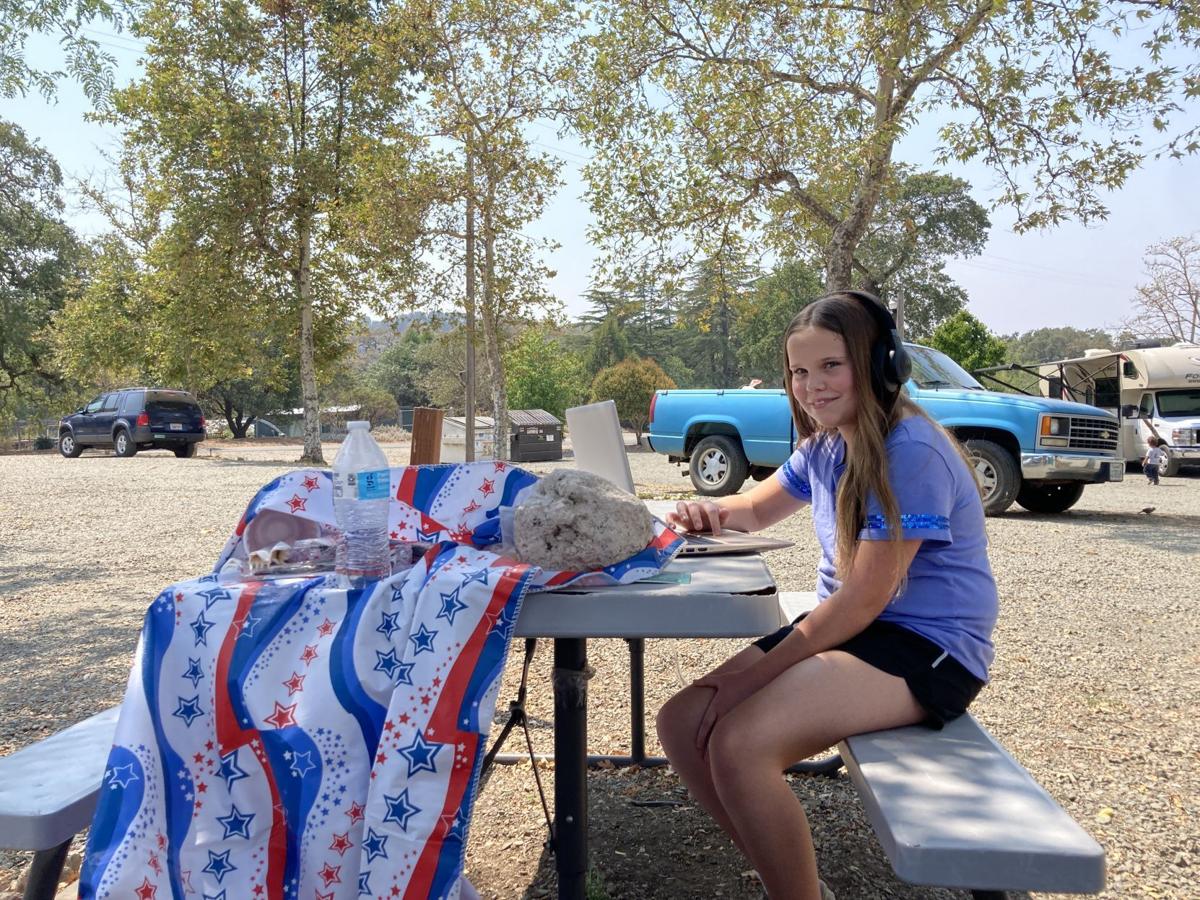 Addison Miracle, April's daughter, sits at a picnic table during online P.E. class. Miracle's family is readjusting to everyday life after evacuating from their home on the grounds of R Ranch near Lake Berryessa. 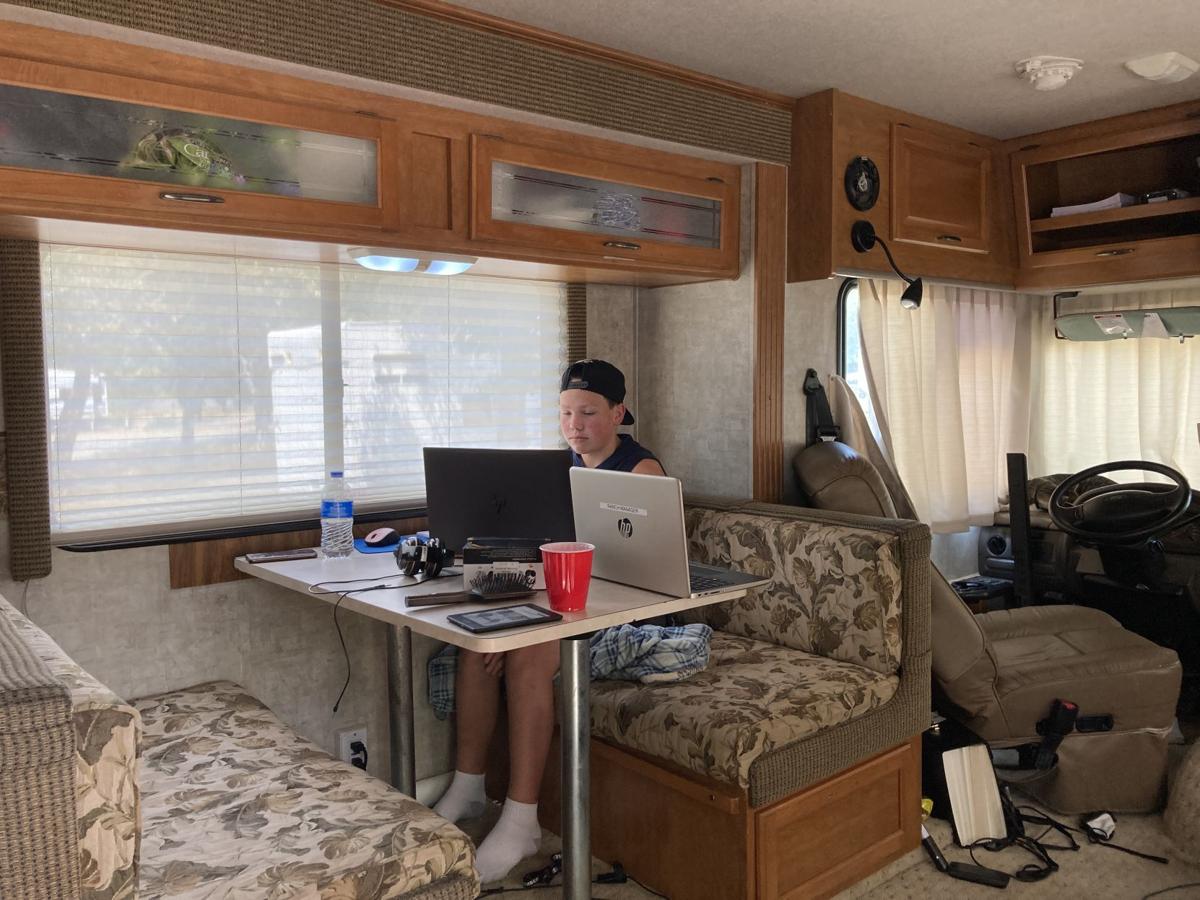 Peyton Miracle, who started high school this year, attends class out of his family's R.V. in Skyline R.V. Park. The family is adjusting to everyday life while evacuated from their home near Lake Berryessa. 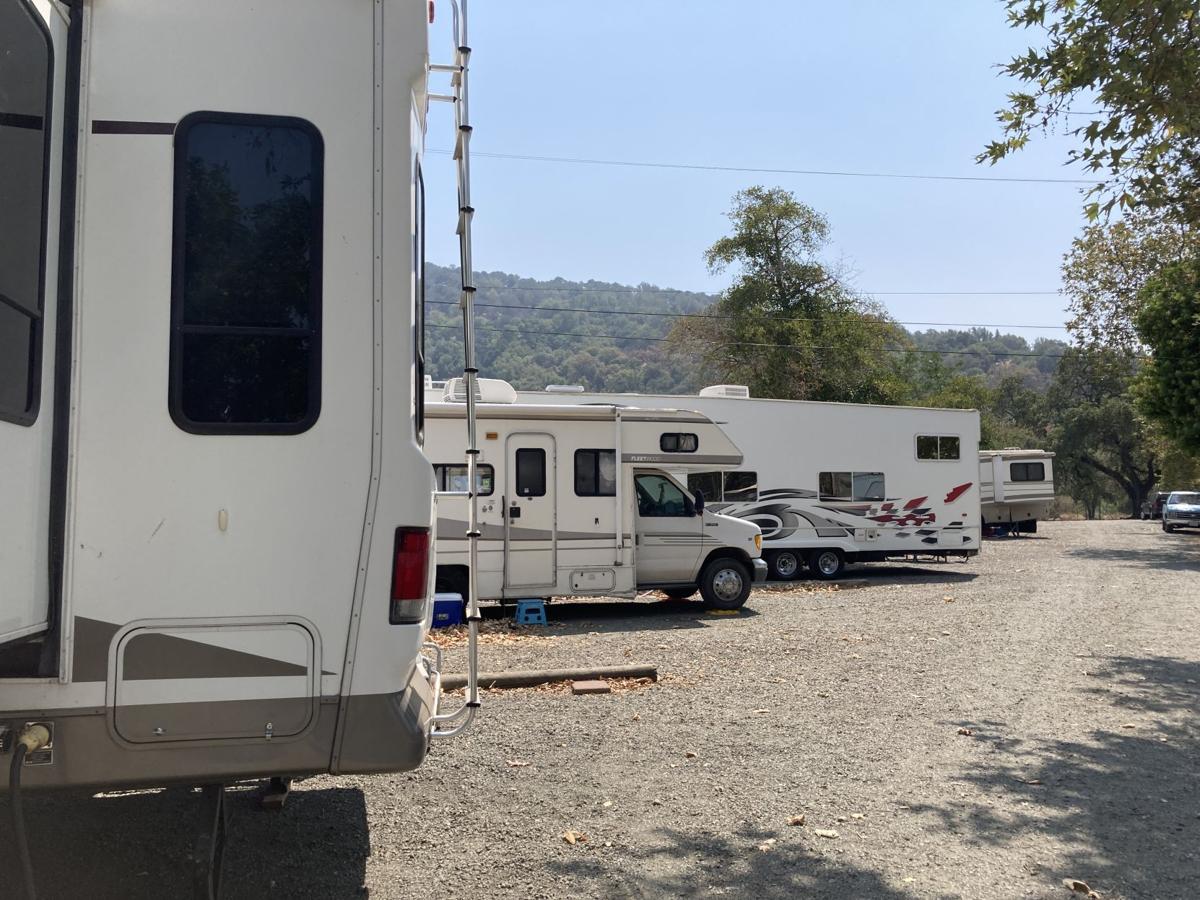 RVs are parked at Skyline RV Park Wednesday afternoon. Park staff said about a third of all vehicles in the park currently are composed of evacuees and their families. 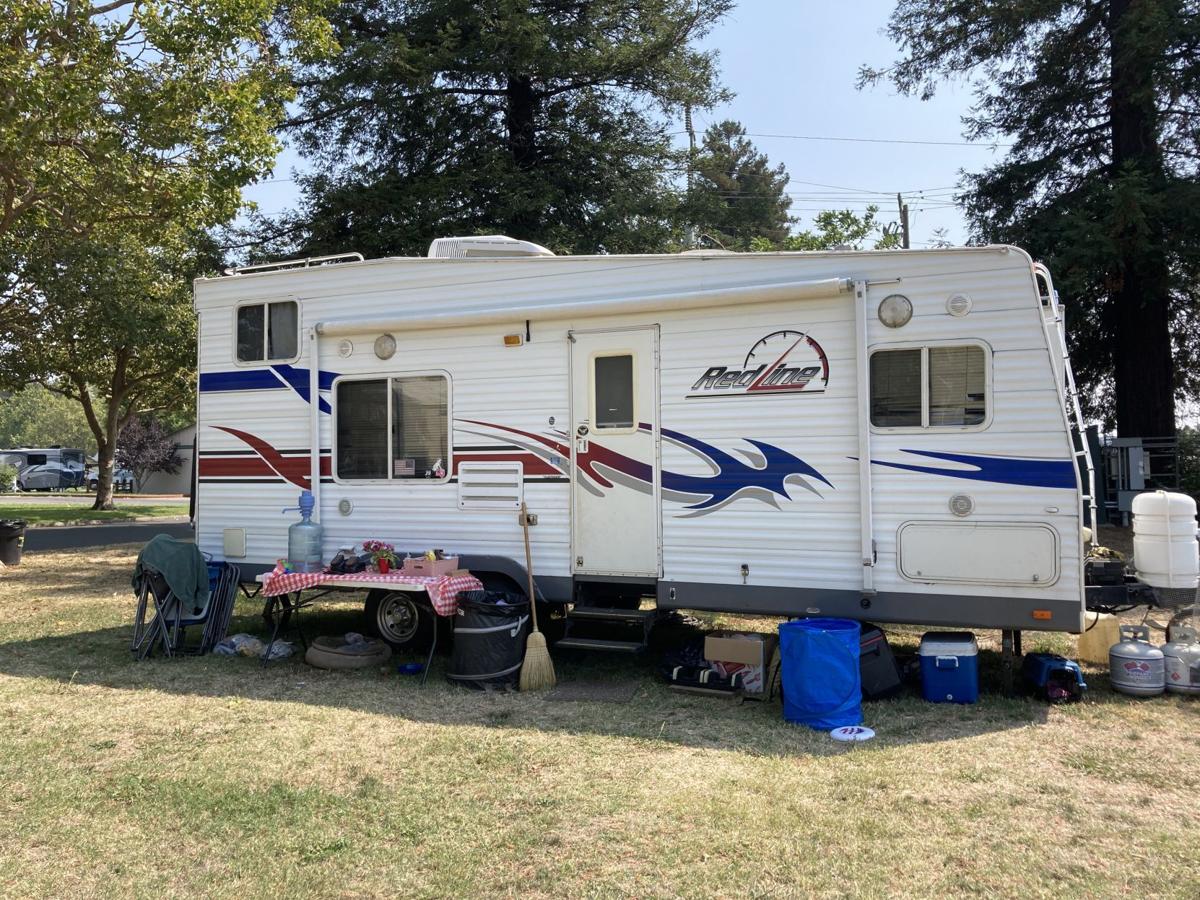 One of the R.V.s parked in a field at the Napa Valley Expo, where Nathan Penley says he and many of his neighbors have parked their vehicles. Penley said his family intends to stay until power is returned to their home in Berryessa Highlands.

April Miracle’s daughter, Addison, was sitting in front of her laptop at a picnic table outside of her family’s RV. Her eyebrows furrowed, Addison watched the screen intently, headphones clamped firmly over her ears.

Such are scenes from the last 10 days for the Miracle family, who on Aug. 17 evacuated from their home just south of Lake Berryessa. Miracle and her husband, Brad, manage R-Ranch at the Lake, a recreational facility and campsite, and live on the property. As the fire swelled closer and closer to the ranch, the Miracles received word they would have to leave.

The next four hours were a blur: Miracle and staff evacuated the ranch’s 53 horses. Their family threw together go bags and took off in their family’s RV. They landed at Skyline RV Park – along with six other RVs from R Ranch employees, most of whom live in their vehicles on the property through the summer season.

“We’ve only ever used it for camping,” Miracle said of the family’s RV, which they purchased last summer. When the evacuation order came down, she added, the family immediately knew they would take to their camper. Both kids – Addison and son Peyton, who is starting high school this year – are attending their classes virtually; Miracle has set up her “office” on the camper’s dashboard, propping up her laptop and a scanner there. And their two cats have made themselves at home inside.

“It’s been challenging, but manageable,” Miracle said, adding that the family is grateful to have their own space now. “I wouldn’t say it’d be very easy to maintain this for a long period of time.”

The Miracles and the staff of R Ranch were not alone in their pursuit; evacuees now make up about one-third of all vehicles parked at Skyline, Kiosk Manager Marcy Davison said. She estimated the park is now hosting at least 12 displaced households.

“The first night (of evacuations) we got something like seven evacuated families,” Davison said, noting that group was just the first wave. Evacuees have trickled in in groups of twos and threes since then from Upvalley and from Vacaville.

“There’s been one or two a day since,” Davison said. “Some of them are here because they’re kind of unsure whether they can go back to their homes. It’s just day by day.”

That had been the case for Craig Philpott and his wife Gena, who have been living in their RV for the past week. When they received news of the evacuation order from their home on Howell Mountain on Aug. 19, Philpott said, he began immediately preparing the R.V.

They trundled off first to a church parking lot in St. Helena, where they got oriented and spent the next few nights, Philpott said. They arrived at Skyline, which has the necessary septic and water hookups for their vehicle, over the weekend.

“We paid for three days, and this is the fourth,” Philpott said, speaking outside of his vehicle Wednesday afternoon. “We know Howell Mountain is fine, so we’re just chomping at the bit to get back.”

The lifting of evacuation orders can be a time-intensive process; Philpott was hopeful they’d be able to return home in the next few days.

In the meantime, Philpott, who is the director of admissions at Pacific Union College, has continued to work from the RV. With school starting in a few weeks, this is busy season for the college; Philpott on Wednesday was fielding calls from colleagues, students and parents concerned with the fate of the school year. He hadn’t found working in the same small space all day exactly conducive to productivity, he added.

“It’s the world’s smallest studio apartment, and there’s no loft option,” Philpott said, laughing. “But we’re so blessed that it’s hard to complain, because we know our home is fine.”

The two prefer to stay in their own space, he said, something that would have been true with or without the added challenge of a pandemic. Both said they felt a need to remain in Napa Valley because of their jobs, he continued, and the $42 per night they would pay to stay in the park trumped any of the hotels in the area.

No resident seeking shelter has been turned away, Napa County officials confirmed Wednesday. The county has also partnered with the Red Cross, which is providing hotel vouchers to evacuees so they may stay free of cost, a spokesperson for the county said. The county had as of Wednesday evening provided shelter services to more than 350 residents.

But for Nathan Penley, much like Philpott, being in a familiar space was preferable even to staying in a hotel. Penley, his wife and their 8-year-old son, who is starting third grade, evacuated from the Berryessa Highlands area when flames began approaching last week. They stayed for a few nights on the grounds of a winery where Penley, a general contractor, was doing construction work, and then in the home of a former client of Penley’s. They’d eventually arrived at the RV park inside the Napa Valley Expo, where Penley expected they’d stay for a few weeks.

“We’re just now hearing that we’ll have a minimum of 14 days with no power in the neighborhood,” Penley said, emphasizing how grateful the family was to hear their home had survived the blaze. They’ll likely remain at the Expo until power is restored, he added.

“We camp a lot, so we’re comfortable in the trailer,” he explained. “I’ve got nothing to complain about. Theoretically, I’m just off camping, though this may not be our preferred camp site.”

Penley’s own parents, who live in Cloverdale, had driven their motor home from its space in Healdsburg down to Napa to join Penley’s family at the Expo site. Penley’s son is enjoying the time with his grandparents, who usually live an hour and a half away, and has adjusted fairly well to the evacuations, Penley said.

Plus, Penley added: this is something of a new normal for his family. They traded in a smaller vehicle for the camper they’re in now in 2017. Three out of the next four summers have been partially spent evacuated and living inside of it, according to Penley: first during the wildfires that ravaged Napa County in 2017, then in the Kincade Fire in 2019, and again this year.

“We’re now used to bailing out in the trailer,” he said. A number of his neighbors from Berryessa Highlands had the same idea; Penley has seen a number of familiar faces in the few days he’s been parked at the Expo.

“We’re making the best of it,” he said. “We’ve eaten dinners together. We’ll try to pretend we’re camping together like we planned it.”

Miracle’s family is similarly grateful for the space where they’ve been staying. They received word that the ranch could be without power for as many as 30 days, she said Wednesday, but were expecting to be able to return also by the end of the week.

It has been challenging for the four of them to remain inside as smoke from wildfires has flit in and out of the valley floor, she said, and to have both kids attending school not only remotely but under the circumstances of their evacuation.

“I don’t know anymore,” she said, laughing when asked what a return to “normal” would look like. “Hopefully this isn’t it. Hopefully it’s going home.”

Even as thousands of people were forced from their homes by wildfires, local grapegrowers had to attend to this year's harvest.

Cal Fire has released a detailed map of the fire zones in Napa, Sonoma, Solano and Lake counties, including current information on structures …

The devastating California wildfires have brought fresh calls to focus on housing development and the preservation of existing homes as the state becomes more prone to blazes.

Letter: Michelle Hickman remembers the Tubbs Fire, and is thankful for Cal Fire's base camp at the Napa County Fairgrounds.

The West is burning, so California struggles to find help fighting its wildfires

NapaCART volunteers rescue and care for animals during wildfires

This animal rescue organization is caring for scores of evacuated animals at shelter sites in Napa County.

Addison Miracle, April's daughter, sits at a picnic table during online P.E. class. Miracle's family is readjusting to everyday life after evacuating from their home on the grounds of R Ranch near Lake Berryessa.

Peyton Miracle, who started high school this year, attends class out of his family's R.V. in Skyline R.V. Park. The family is adjusting to everyday life while evacuated from their home near Lake Berryessa.

RVs are parked at Skyline RV Park Wednesday afternoon. Park staff said about a third of all vehicles in the park currently are composed of evacuees and their families.

One of the R.V.s parked in a field at the Napa Valley Expo, where Nathan Penley says he and many of his neighbors have parked their vehicles. Penley said his family intends to stay until power is returned to their home in Berryessa Highlands.