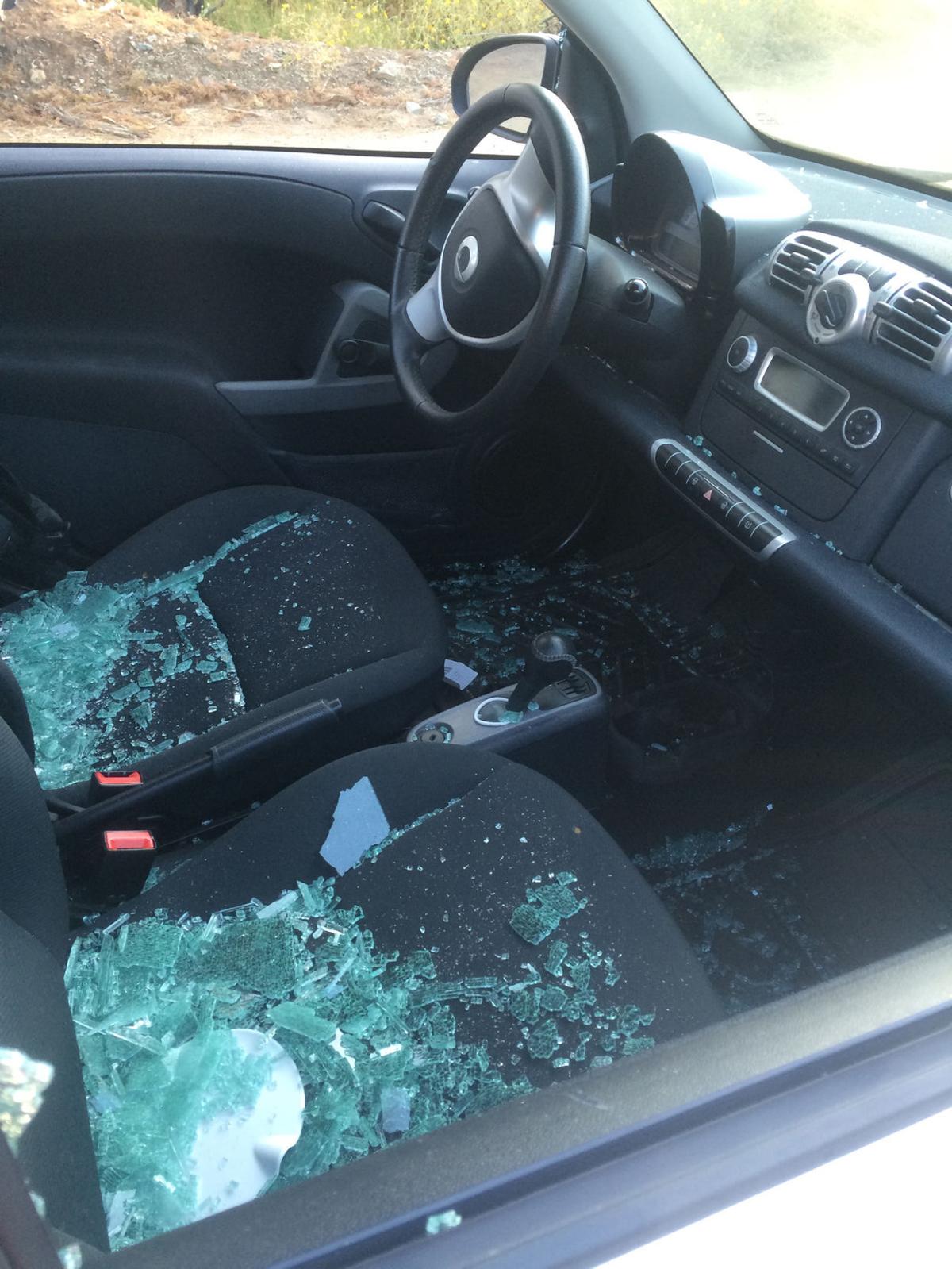 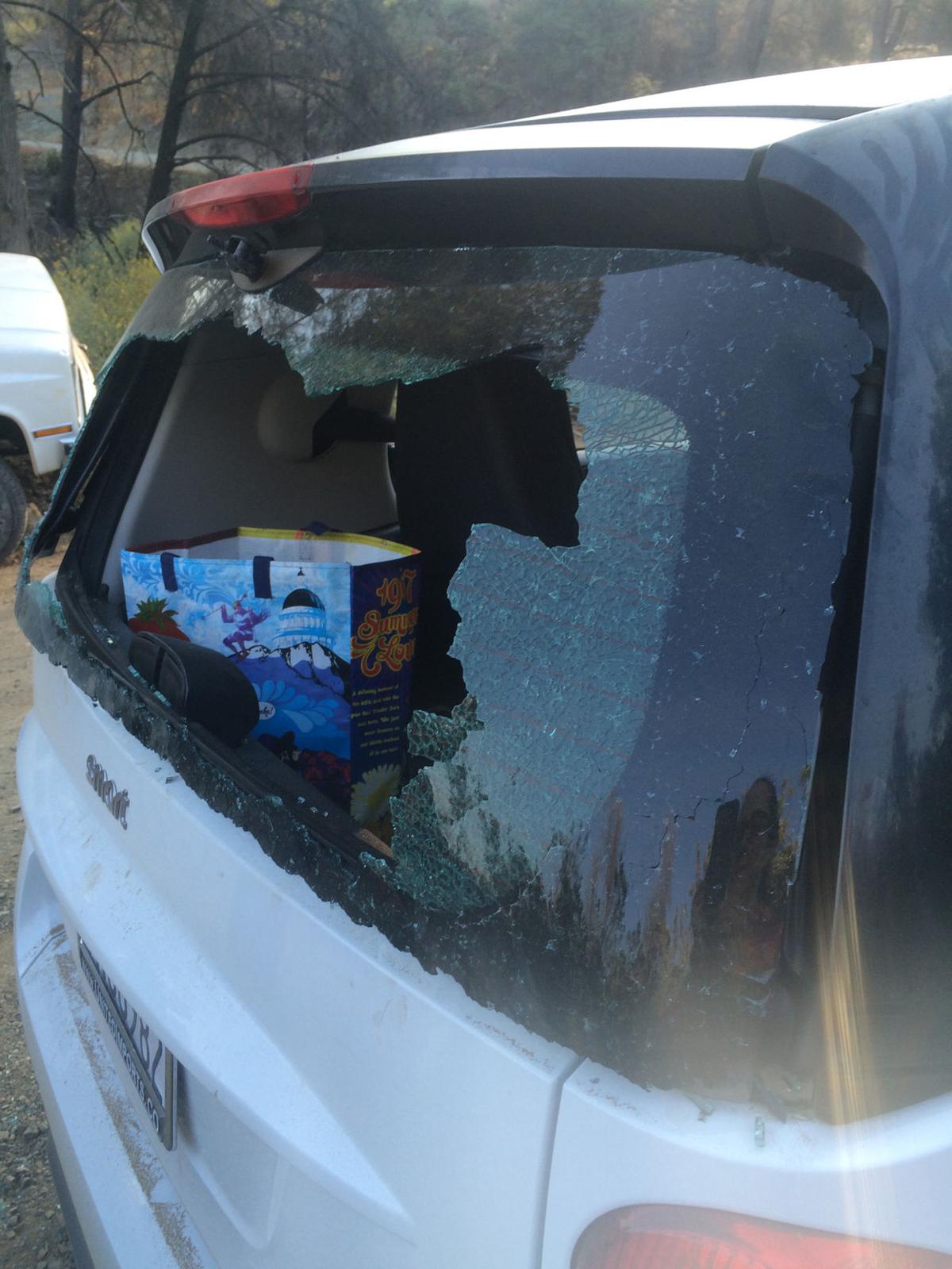 The rear window of Erik Thompson's 2013 Smart Fortwo was smashed while he and his wife tried to sleep in their nearby tent at Lower Hunting Creek Campground early Sunday morning. 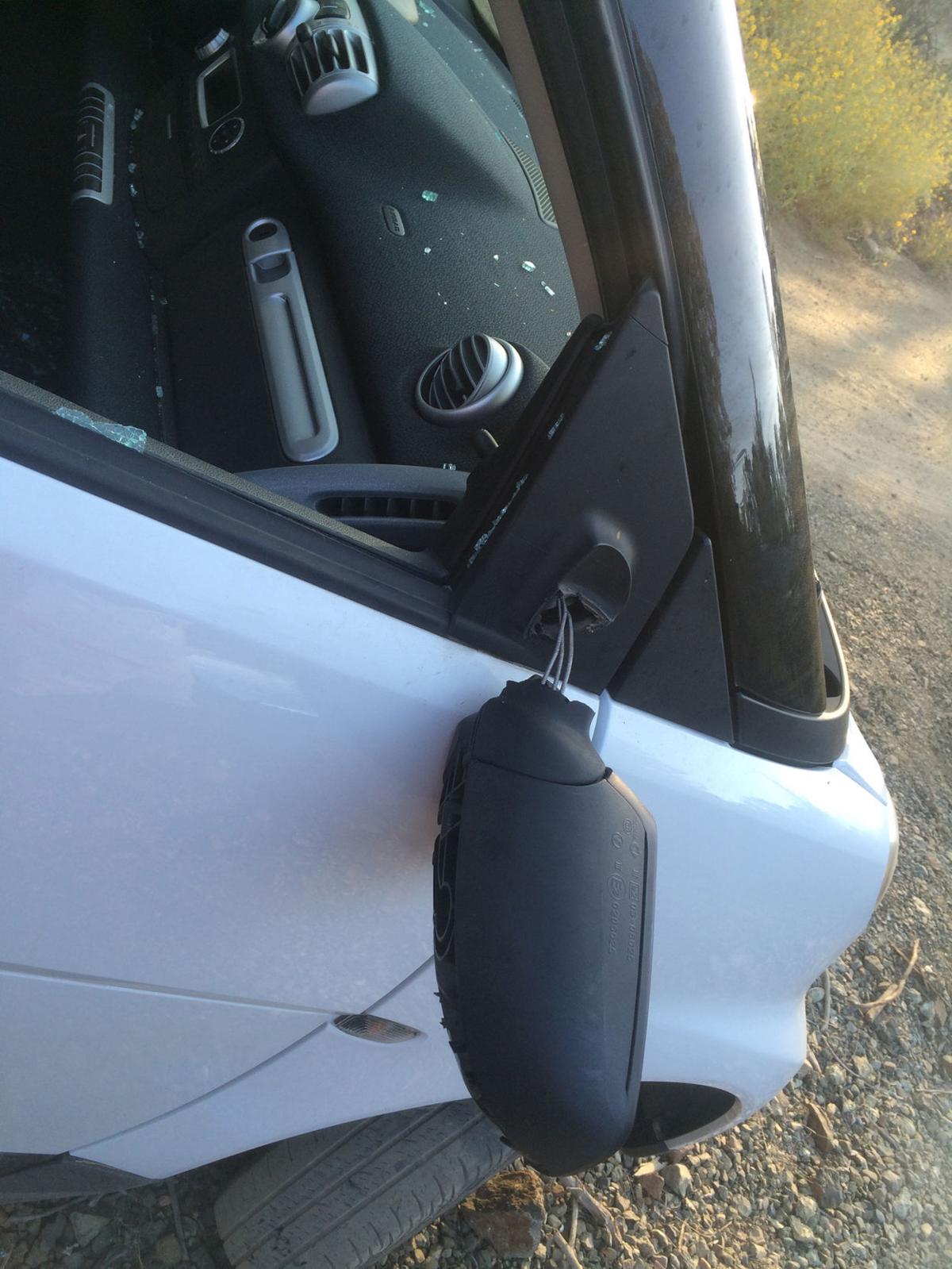 A couple looking for a night of “peace and quiet” experienced the exact opposite while camping north of Lake Berryessa over Labor Day Weekend.

It was 1:30 a.m. on Sunday when Erik Thompson’s wife, Adriana Castro, complained of hearing bashing sounds from their makeshift campsite near Lower Hunting Creek Campground in the Knoxville Recreation Area. Thompson grew up in Napa and had fond memories of visiting the area as a child.

“I thought it was a hunter,” Thompson said. He fell back to sleep but his wife heard more noises not even an hour later. Thompson still didn’t think much of it since the campground was “pretty crowded.”

Finally, after hearing a vehicle nearby, Thompson said he figured he should turn a light on inside their tent so hunters would know they were there.

“Hey, is that your Smart car?” he heard someone say. The strangers – two men – informed him that the car had been badly damaged.

The windows were smashed, three of the tires had been slashed, and the antenna and the driver’s side mirror were both broken. Thompson hadn’t even had the 2013 Smart Fortwo for a year yet.

The two men said they had seen a green Ford Ranger with a camper shell in the area a little earlier, Thompson said.

Thompson didn’t have cellphone service, so the men helped the couple pack up their stuff and took them to their campsite in order to call law enforcement. It was just after 2 a.m.

“We didn’t know what was going on,” Thompson said. His wife was scared and nervous, but Thompson was confused. He didn’t know whether or not to trust the two men. Maybe they were the ones who had vandalized their car.

The foursome went back to check on the Smart car, but on their way there, they saw the green truck again.

“We hightailed behind them,” Thompson said, jotting down the license plate number and bouncing around as they headed through the campground. The truck pulled off to the side of the road, and the group passed by, not wanting to scare the driver off.

“Sure enough (after turning around), we see him sitting right there by the Smart car.” Then he took off, Thompson said.

After finding out where the driver was camping, the two men, who Thompson called “guardian angels,” went down the hill to the site. Thompson followed behind, still suspicious of his new friends.

It was a stakeout.

The three men heard their suspect bragging about the vandalism to others at his campsite.

“There was nothing in there, there was like an empty bowl, some mason jars, triple A (batteries),” he said.

“The driver’s side… WHAM!... and it didn’t crack or nothing. The second time… it shattered.”

After hearing all this, Thompson’s new friends emerged from the bushes with the conversation recorded on one of their phones.

They all headed back to their campsite and met with a Napa County Sheriff’s deputy and played him the recording. The deputy checked out the Smart car, took photos and found blood inside of it. When back-up arrived, the deputies went to the suspect’s campsite.

The suspect, identified as 19-year-old Christopher Richard Hennion of Napa, had a big gash on his hand, had a crow bar matching the damage and one of the people in his party “spilled the beans” when questioned at the scene, Thompson said.

He also had two knives on him and had scratches all over his arms, said Sheriff’s Capt. Keith Behlmer.

Hennion was arrested and booked at the Napa County jail on suspicion of vandalism.

“We had blood samples, the tools, testimony and the recording,” Thompson said. “It was like a movie.”

The car was towed and the couple went back home to Santa Rosa.

Hennion was arraigned in Napa County Superior Court on Wednesday on three felonies, including vandalism over $400, carrying a dirk and dagger, and being in possession of metal knuckles. He was told to return Oct. 12 for his next hearing.

Although nothing bad happened to the group while spying on Hennion, Behlmer suggested that people in situations like this wait for authorities to arrive.

“I wouldn’t advise crawling around in the dirt and trying to get recordings,” he said. He also said that it’s never a good idea to leave your car in the middle of nowhere.

“We’ve had a lot of cars broken into over the years at Lake Berryessa,” Behlmer said. However, the vandalism, car burglaries and fights are nothing compared to what they used to be, he added. “It used to be out of control, especially on holiday weekends.”

Thompson was still waiting to hear back from his insurance agency as of Thursday when his car was still at an auto shop in Pope Valley.

“It turned out to be quite a harrowing experience.”

Two Fairfield residents were attacked while hanging out by the Pope Creek Bridge at Lake Berryessa on Tuesday night, according to the Napa Cou…

The rear window of Erik Thompson's 2013 Smart Fortwo was smashed while he and his wife tried to sleep in their nearby tent at Lower Hunting Creek Campground early Sunday morning.