Teenagers across Napa and American Canyon are marking the end of their high school years this week in ceremonies that are far removed from the traditional cap tosses before crowds of spectators.

The spread of the novel coronavirus has halted most public activities since mid-March, including the high school commencement exercises that would have taken place at local football stadiums this week. Instead, members of the Class of 2020 are driving to scaled-down “diploma acceptance walks” at their campuses, meeting school faculty and receiving their diplomas while parents and siblings cheer, honk horns and snap photos and videos from their family vehicles.

Monday morning, the Napa Valley Unified School District hosted the first of its drive-up diploma events for 96 graduates at New Technology High School, where a queue of balloon-decked cars, pickup trucks and SUVs snaked through the parking lot toward the school entrance for three hours.

The only touch of pomp and circumstance to be found was in Sir Edward Elgar’s march of that name, issuing from a public-address system installed curbside at the main entryway. Yet the honking of horns, and shouts and whoops from fellow New Tech students waiting their turn, accompanied each senior who stepped from a vehicle and strode toward a raised platform, which was festooned with foil balloons and the inflated numerals “2020” in shiny pink and gold.

“Kyle Mauldin!” an announcer called out through the PA, and the new graduate, having emerged from his car in a purple cap and gown, strode up a ramp, paused on the platform and continued on to a purple-draped table. Picking up a diploma that had been placed on the table, he opened its cover and posed for a photographer, as relatives inched forward and snapped pictures of their own. Finally a car door swung open and Mauldin entered before the car left the campus, about two minutes after arriving.

-- Tuesday and Wednesday at Vintage High.

-- Thursday and Friday at Napa High.

Senior each have an appointed time to receive a diploma as a carload of family watches.

While waiting his turn in line, Mauldin, who plans to study music at Napa Valley College starting this fall, expressed his gratitude at receiving whatever send-off his school could manage while social distancing rules continue to prevent large gatherings.

“I really like how we have something; there’s a lot of schools that won’t get much this year,” said Mauldin, who like other seniors had been deprived of New Tech’s prom, field day and senior trip after NVUSD shut down all campuses March 13 and finished the year with online instruction. “It’s a little weird for sure, not having all the end-of-year stuff, but I’m glad for what we have.”

Craning his head out the car window, he spotted Tony Gonzalez near the school entrance, about to receive his special moment. “Yeah, Tony!” he shouted toward his schoolmate near the curbside platform.

“I was happy about it,” Mauldin’s mother, Nicole, said of educators’ efforts nationwide to salvage moments in the spotlight for seniors despite widespread shutdowns. “It’s nice to see it nationally, with everything coming together to do everything they can to make it memorable.”

New Tech’s ceremony is the prelude to a slate of diploma walks honoring the graduates at the Napa, Vintage and American Canyon high schools, which account for most of the district’s roughly 1,400 seniors. Those events will each take place over two days, with each student arriving on campus at pre-scheduled times: Tuesday and Wednesday at Vintage, Wednesday and Thursday in American Canyon, and Thursday and Friday at Napa High.

To prevent the spread of the coronavirus, NVUSD is not opening the events to the public. Each graduate is allowed one group of relatives or friends to witness the diploma acceptance from a single vehicle, and only the student may step outside while his or her group watches. Teachers and faculty at Monday’s New Tech ceremony all wore protective masks, and students are encouraged to do the same this week.

When American Canyon High School informed its seniors of the plan last month, the news left Lily Nauright wistful for what was lost yet still thankful for the recognition.

“I’m said about it – obviously it’s not what I looked forward to for many years, but I can’t help but be grateful for the effort they are putting into make as close to normal as they can get,” said Nauright, who is scheduled to receive her diploma Thursday before pursuing biology at the University of Oregon.

A Zoom video call with grandparents in South Carolina and extended family elsewhere would follow, though what Nauright really wanted – more time together with classmates – remained out of reach for now.

“We can still talk at this point and say, ‘Oh, we should totally do a weekend in Tahoe,’ but with the world being closed I don’t even know if we’ll be able to,” she said. “But I would love to.”

For one former teacher who watched New Tech seniors arrive and depart, the unusual ceremonies this week have revealed one small and unexpected benefit – a much more close-up experience for students’ families than in a stadium.

“Usually, the parents are so far away, we can’t see them,” said Cindy Watter, who taught at Napa High before her election to the NVUSD board. “But today, we see them, and they’re beaming ear to ear.”

The Class of 2020 will receive diplomas with only family and faculty present, but will be united in graduation videos.

Private diploma ceremonies and speeches on video are in store for Napa's high school graduates — and possibly a full-dress ceremony next year.

Tribute videos honoring the Class of 2020 in Napa and American Canyon will be posted online starting Thursday and continuing into Saturday.

A decision is expected July 16 on how NVUSD schools can safely reopen for the fall semester.

Conditions for how Napa area schools can reopen for the fall semester may be hammered out by the school board Thursday night.

The Napa school year will start with online instruction, with no date set for reopening campuses as COVID-19 conditions improve.

The continuation of distance learning when Napa schools restart in August has sparked sharp differences of opinion.

Guidance on safely holding graduation ceremonies for the Class of 2021 may come as soon as next week, according to the NVUSD superintendent.

Come the fall semester, the college will keep to a mostly internet-based teaching model.

New Tech's Class of 2021 got the in-person ceremony denied to last year's seniors. Napa, Vintage and American Canyon graduations will follow this week.

Here's how badly space affects the blood of astronauts

WH: Russia could 'at any point' attack Ukraine

WH: Russia could 'at any point' attack Ukraine

Insane base jumpers leap blind from cloudy cliff in Italy

Insane base jumpers leap blind from cloudy cliff in Italy 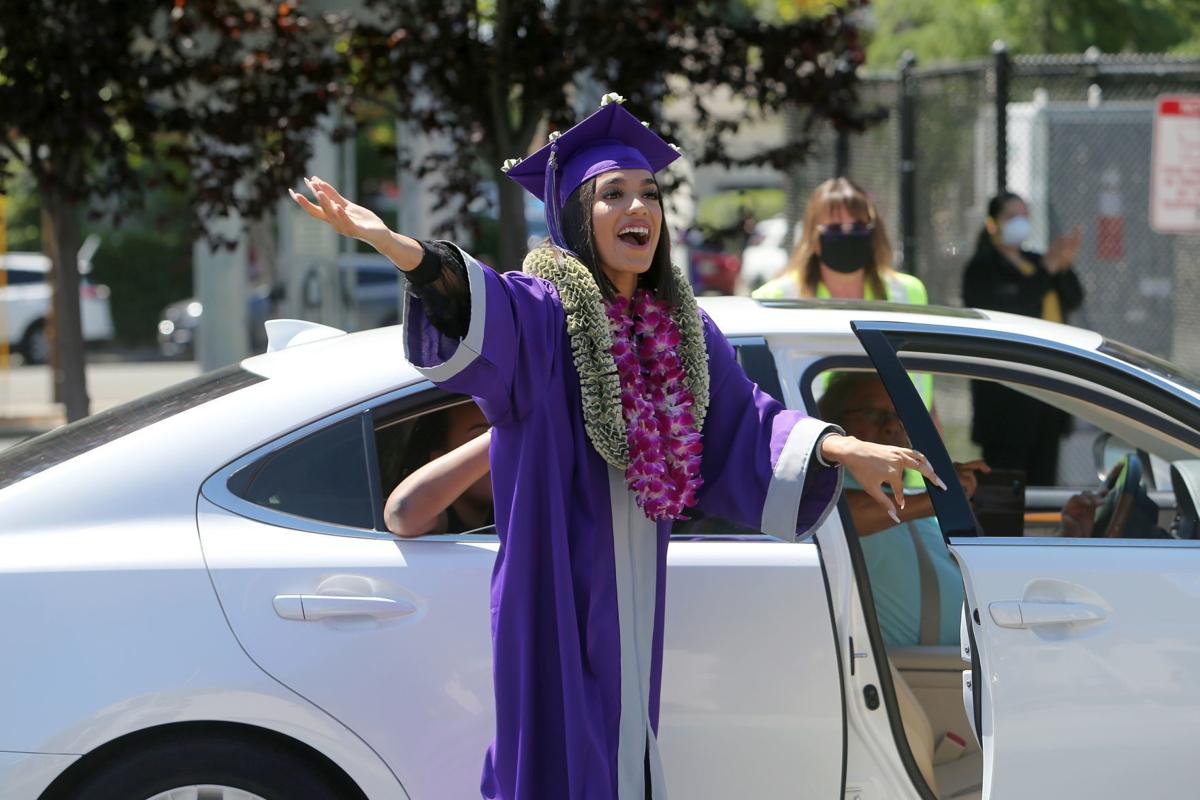 A New Technology High senior emerged from her family's car Monday morning at the Napa campus, which hosted a drive-up ceremony where graduating seniors could greet school staff, pose for photos and receive their diplomas before leaving with their families. The Napa Valley Unified School District is organizing similar events for the Class of 2020 at all of its high schools as a replacement for graduation ceremonies canceled due to the coronavirus pandemic. 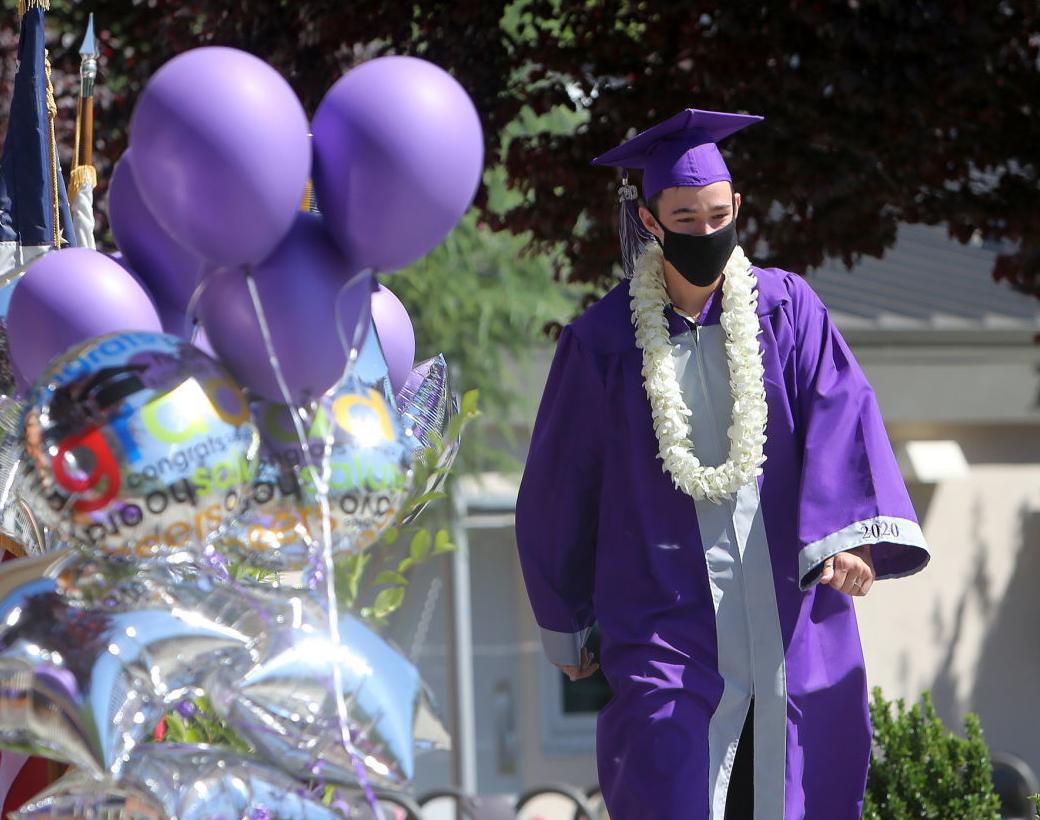 Each graduate at New Technology High School spent about two minutes in the spotlight during the school's special drive-up ceremony on Monday: leaving the family vehicle, greeting school staff, posing for a photo and receiving a diploma before re-entering the vehicle and leaving. 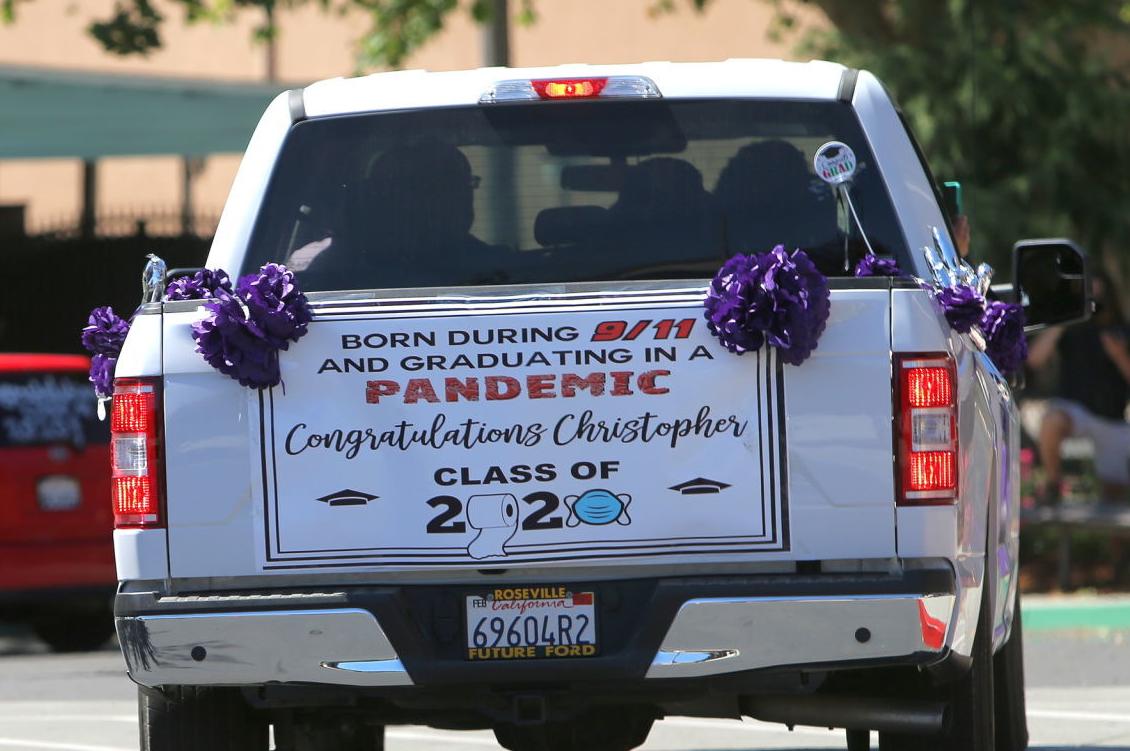 A tailgate sign celebrating one of New Technology High School's 96 graduating seniors made light of the circumstances that forced the school and others in the Napa school district to forgo traditional commencements in football stadiums in favor of drive-up ceremonies. 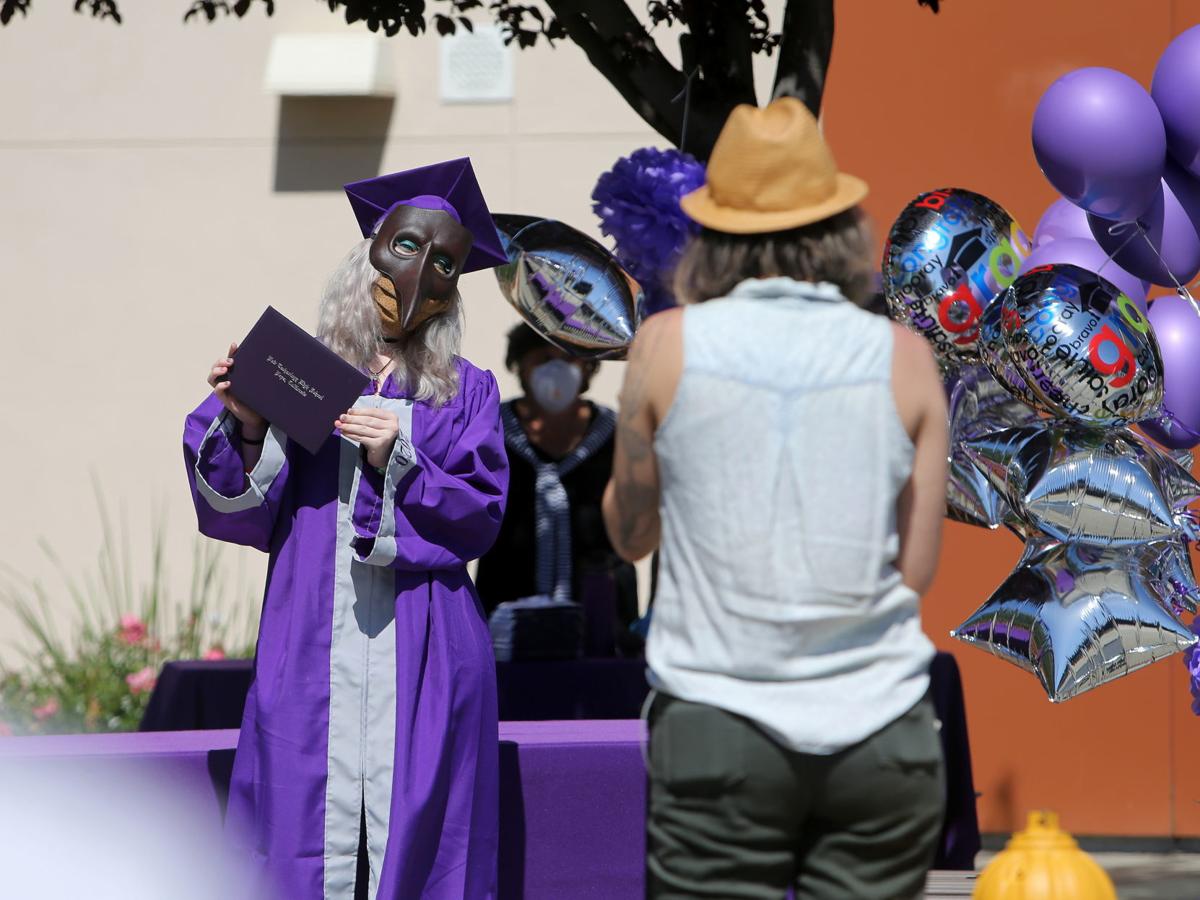 A member of New Technology High School's Class of 2020, receiving a diploma during a drive-up ceremony Monday, sported a playful take on the face coverings that have become commonplace during the coronavirus pandemic.