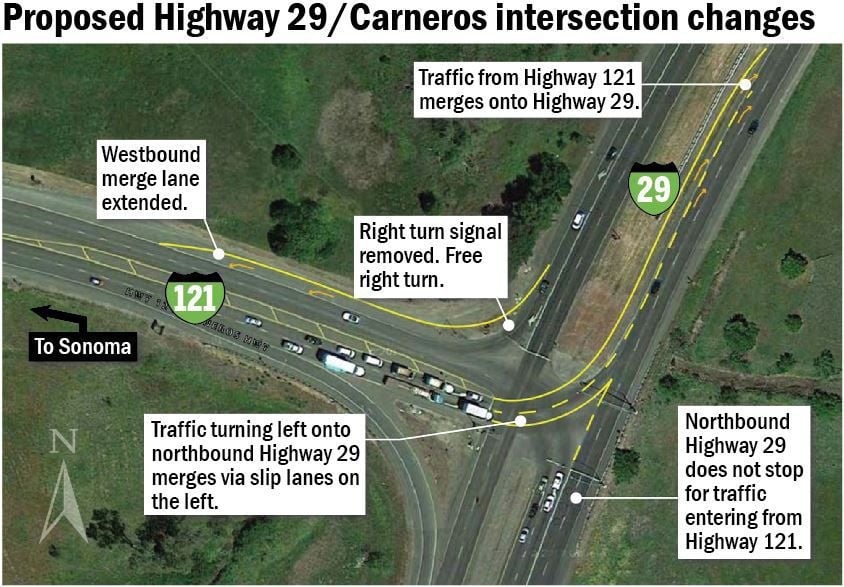 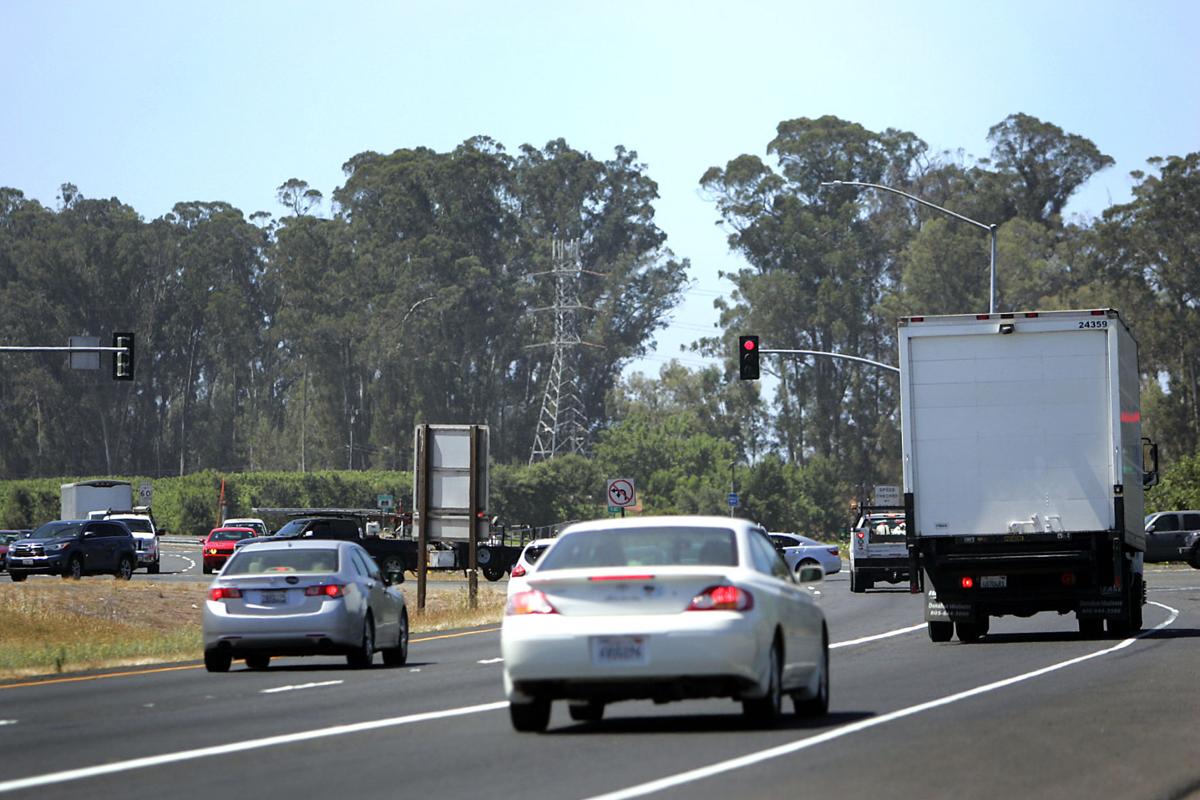 Discussions are underway as to possible solutions to the traffic congestion at Highways 29 and 12/121 near Stanly Lane.

Discussions are underway as to possible solutions to the traffic congestion at Highways 29 and 12/121 near Stanly Lane.

Transportation planners are considering a relatively cheap fix to speed up traffic at the Carneros intersection of Highway 29 with Highway 12/121.

No massive interchange is proposed to replace traffic signals at the T-intersection for Napa and Sonoma flows. Instead, the three-year-old idea is to add merge lanes, give some lanes a constant green light and reap a little congestion relief.

If that doesn’t sound cheap, consider congestion-busting plans for the signalized Soscol Junction intersection a few miles south along Highway 29 at Highway 221. The estimated price tag there runs as high as $40 million.

Carneros intersection is just one more spot where Napa Valley drivers see a slowdown when traffic is at its worst. The Napa Valley Register in this Traffic Tales series is exploring what congestion conditions are like and what solutions might be found.

Morning rush-hour drivers at the Carneros intersection face average delays of 42 seconds, according to Caltrans, which gives it a “D” grade that corresponds pretty much to a “D” grade at school – lousy.

Evening commuters fare better. An average delay of 25 seconds translates to a Caltrans grade of “C.”

Expect both commutes to move into the “F” territory of failure in coming years. By 2039, the morning delay could be over two minutes and the evening delay over three minutes, Caltrans predicts.

This junction between Napa and Sonoma counties is among the more pleasant spots to be stuck in traffic. Nearby are eucalyptus trees along Stanly Lane, wetlands with egrets and other wildlife and a hill grazed by Dutch-belted cows.

But Napa resident Angela Streif doesn’t want to linger when she is driving to work in the morning. Her trip to the airport industrial area periodically bogs down at Carneros interchange a little after 8 a.m.

Sometimes, she’ll find she has to wait through several cycles to go through the light.

“You can’t even get up to speed by the time you’re stopping again,” she said. “Just a few cars get through the light before it turns red again.”

Other times, she’ll drive quickly through the intersection. She finds the timing of the backups perplexing.

“What’s so weird about it is it doesn’t happen every day,” Streif said. “I would say once or twice a week, it will be really backed up. But it’s not on any one day. It can be a Tuesday one week, it can be a Wednesday another week.”

Perhaps an accident causes snarls that reverberate through the rush hour, she suggested.

When Streif is in a hurry, she considers taking the frontage road to Stanly Lane to avoid backups. But it’s a guessing game. The exit at Imola Avenue is 1.7 miles before the Carneros intersection, too far for her to see brake lights and know if a backup actually exists.

The NVTA took a close look at the Carneros intersection in its 2014 Highway 29 Gateway plan. This study concluded an interchange with on-ramps and off-ramps is the ultimate solution, but that such a structure would be costly and could have big environmental impacts.

One alternative is building the Carneros interchange roundabout, either with or without traffic signals. This wouldn’t make a big congestion-easing difference in the long run, the plan concluded.

That leaves the $1 million idea to ease congestion on the (relative) cheap.

Northbound Highway 29 traffic presently stops at a red light when Highway 121 traffic coming from the Sonoma direction turns left toward Napa. The proposed change – have northbound traffic always flowing through the intersection.

And what happens when the Highway 121 traffic makes a left turn in front of it? A long merge lane would be created so these divergent traffic streams have space to come together.

For that matter, a traffic study shows even this altered Carneros intersection would eventually earn an “F” grade for delays. But those delays in future decades would be less than two minutes, instead of over three minutes.

Miller showed a slide of the possible Carneros intersection-of-the future at an April NVTA retreat.

“I think this is an improvement all of us are anxious to make,” Miller said.

The bigger, more expensive project for the more congested Soscol Junction a few miles south along Highway 29 remains the NVTA’s priority. The agency and Caltrans are working on that project’s environmental impact report.

Still, the smaller Carneros intersection project is at least in the agency’s sights, even if there is no timeline to build it and no state-required environmental report has yet been launched.

“It’s such a nominal cost, it seems like that’s something would be easy to deliver,” Miller said.

If all had gone as planned in the 1970s, both the Carneros and Soscol Junction intersections would already be interchanges today. Caltrans during that decade was figuring out the huge Southern Crossing project.

Highway 29 at that point went north on Highway 221 and then cut across the valley on Imola Avenue. Highway 29 then continued north up Napa Valley and Highway 121 went west to Sonoma.

All of that led to congestion near Napa State Hospital and on Imola Avenue. Caltrans and county officials wanted a Southern Crossing bridge – today’s Butler Bridge – so Highway 29 could bypass the city of Napa several miles to the south.

The Southern Crossing project approved in 1974 included interchanges at both entrances. But in 1975, state transportation officials pleaded poverty and proposed installing traffic signals instead. The state would return to build interchanges “when traffic warrants them.”

By 1977, the state didn’t even have money to connect Highway 29 to the bridge it was already building over the Napa River. County officials went from worrying about having interchanges to keeping the Southern Crossing from becoming a bridge to nowhere.

“That’s of small benefit to have a bridge standing in the middle of the river,” Supervisor Dowell Martz said in 1977.

In 1981, the state finally opened the several miles of connecting highway that made the Butler Bridge part of Highway 29. But the interchanges had dropped from the plans, replaced by the traffic signals.

Whether that was a lost opportunity or a blessing in disguise is unclear. The 1970s-style interchanges might be considered a blight on Napa County’s agricultural landscape today.

Perhaps today’s traffic solutions for Carneros intersection and Soscol Junction will be more artful – when and if they are built.

More in Series: Traffic Tales of Napa County (8 of 11)