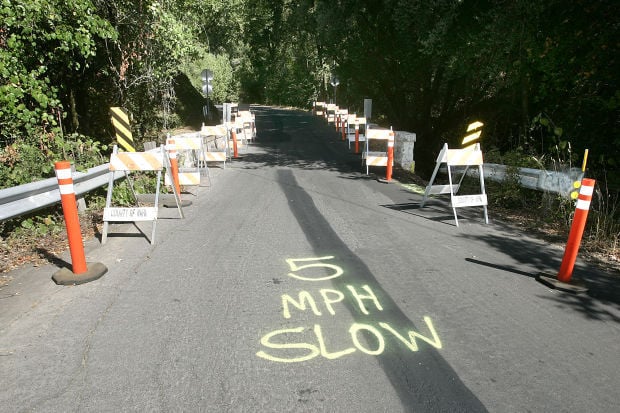 This one-lane bridge on Partrick Road will be closed Monday for temporary repairs. 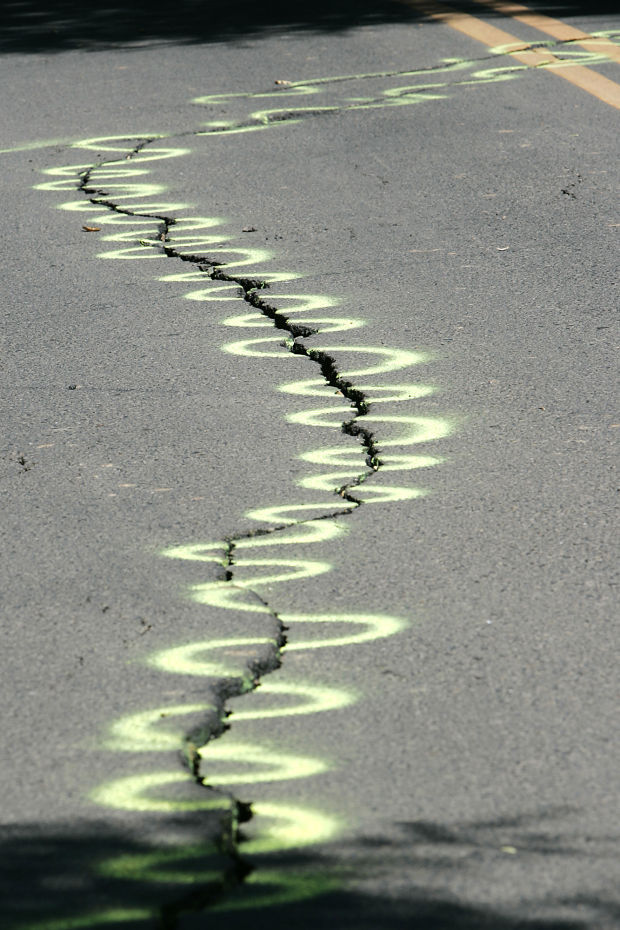 Squiggle lines mark cracks that appeared on a section of Partrick Road in west Napa following the earthquake.

Napa County roads weren’t punished that hard in the Aug. 24 earthquake, with damage localized in the Carneros area and north along the west Napa fault line responsible for the 6.0-magnitude quake.

There were no lengthy closures and the overall quality of the network — among the lowest-rated for Bay Area cities — fared well given the severity of the quake, county Public Works Director Steve Lederer said.

In the city of Napa, Public Works crews acted quickly to repair damage to some 130 broken water mains, and then to patch up cracked roads and streets with worst fissures, Mayor Jill Techel said.

Techel said the city wanted to fix the damage quickly to give residents peace of mind following the quake. The majority of the short-term repairs have been made, but the Public Works Department is now going through and re-examining the overall state of the city roads and bridges to see what long-term repairs are needed.

“The quicker we can get it fixed and get it back to normal, the quicker people won’t have to think about it,” Techel said. “This is just kind of putting Band-Aids on things.”

Techel said officials with the Federal Emergency Management Agency are tallying the damage to local government agencies, including the city’s infrastructure, to determine whether it surpasses the federal threshold of $51 million. Techel couldn’t say Tuesday if the preliminary estimates surpassed that number.

If the damage is great enough, and a federal disaster declaration is granted by President Obama, the city and other agencies would be eligible for reimbursement from FEMA for 75 percent of their costs. Techel said FEMA officials toured water mains, bridges, the city-owned Goodman Library, as well as other damaged areas late last week.

The timeline on the disaster declaration is still up in the air, pending FEMA and local and state officials finishing their assessments of the damage. Homeowners and businesses could also be eligible for aid through a separate FEMA program that provides private assistance, but that’s also contingent on a damage assessment.

“The earthquake hit our communities hard, and federal assistance is needed for our area to fully recover from the damage that was caused,” Thompson in a statement. “I stand ready to help expedite any support and resources because the sooner we get aid from the federal government, the sooner we can begin rebuilding and repairing our homes, businesses, and infrastructure.”

Until that happens, Techel said the city is footing the costs, which she believed may be paid for through the city’s savings accounts.

“We just bit the bullet right away,” Techel said. “That’s kind of what those funds are there for.”

In the unincorporated area, a one-lane county-maintained bridge on Partrick Road near the Browns Valley neighborhood in west Napa sustained damage, but it won’t cause the immediate closure of the bridge to vehicle traffic, Lederer said.

Rather, weight limits have been imposed on the bridge’s vehicle traffic, Lederer said. But those measures are precautionary, and the damage isn’t significant enough to force repairing or replacing the bridge soon.

Lederer said the time frame for that work is more likely a year out. Crews will be adding structural support for the bridge in the meantime, Lederer said.

Roads closest to the earthquake’s epicenter off of Milton Road sustained the heaviest cracking, and the county was able to trace the path of its fault line, the West Napa Fault, based on the pattern of cracking on roads farther north such as Old Sonoma Road, Browns Valley Road and others, Lederer said.

“Overall, the county road system fared pretty well,” Lederer said. “The vast majority of the cracking was minor enough that we didn’t have to close the roadway.”

Lederer said the Public Works Department is still seeing the roads shift slightly as the earth beneath them settles from the earthquake. Initially, Lederer said the county will look to its insurance policies to pay for repairs to damaged infrastructure, then to any state money, federal FEMA aid that may become available, and finally to its budget.

Supervisor Keith Caldwell said the county’s cost of repairs will be largely covered by its earthquake insurance, buffering the potential hit to the local taxpayers. Caldwell said that won’t count toward the federal threshold, because that threshold only counts uninsured losses.

County employees will be uprooted due to the earthquake’s damage to the Carithers building in downtown, home to the District Attorney’s Office, the Public Defender’s Office, and the Assessor-Recorder-Clerk and Registrar of Voter’s Office.

Both the Carithers building and the third floor of the county administration building sustained significant water damage due to burst pipes, and it will be months before they’re repaired fully, Lederer said.

The Health and Human Services Agency campus on Old Sonoma Road also was hit fairly hard. A number of trailers didn’t hold up well in the severe shaking.

But Caldwell said the county is handling the displacement of its employees, sending some, including the offices of the elected supervisors, down to its new south campus facilities on Napa Valley Corporate Drive for the time being.

Attorneys and staff in the District Attorney’s Office and the Public Defender’s Office were at the downtown library last week, but that was a short-term fix, and Caldwell said the county is looking to lease out space downtown to give them a more long-term home.

“It’s going to be a long haul getting everything back to where it was,” Lederer said. “But that’s what we will do.”

This one-lane bridge on Partrick Road will be closed Monday for temporary repairs.

Squiggle lines mark cracks that appeared on a section of Partrick Road in west Napa following the earthquake.