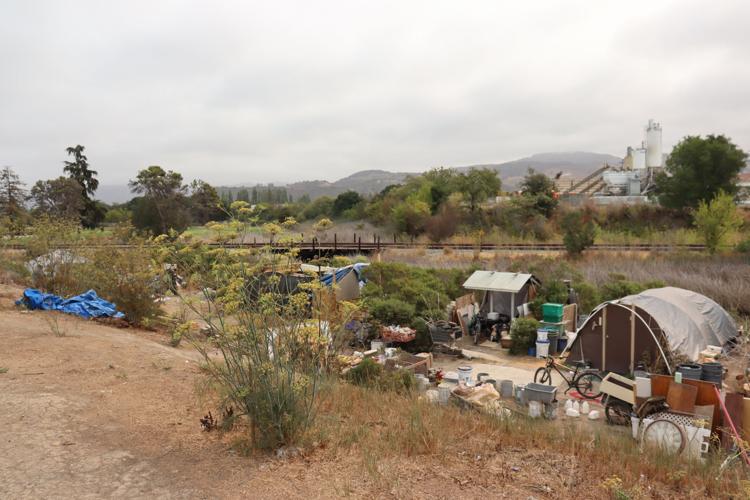 A portion of the Kennedy Park encampment before last week's cleanup. 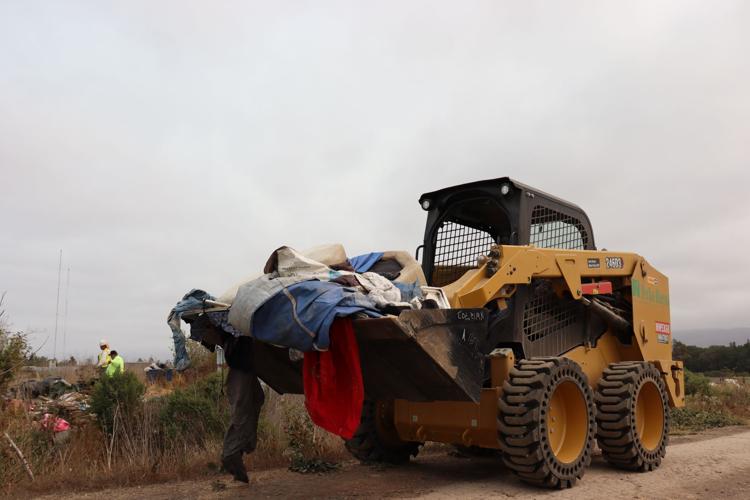 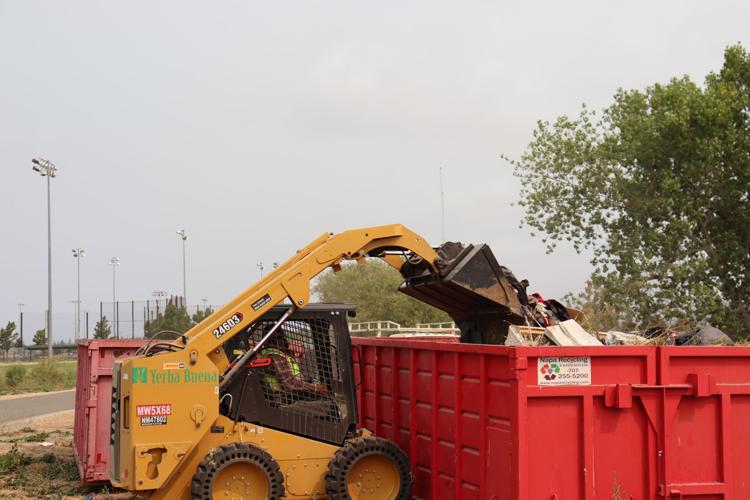 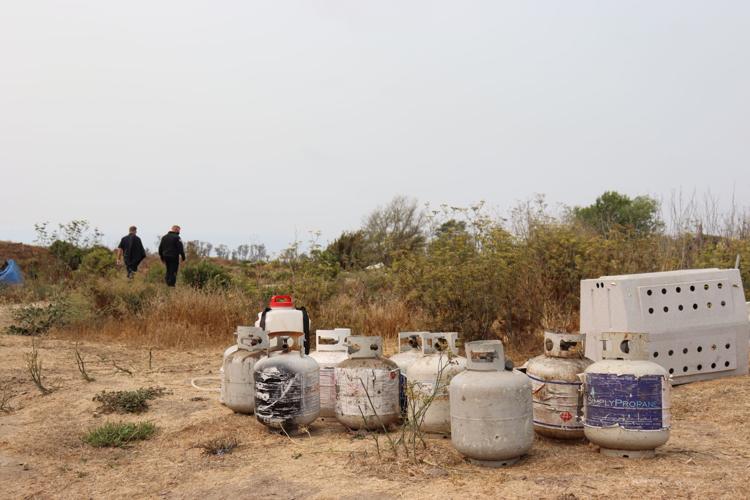 Propane tanks in the Kennedy Park homeless encampment, ready to be picked up as trash. 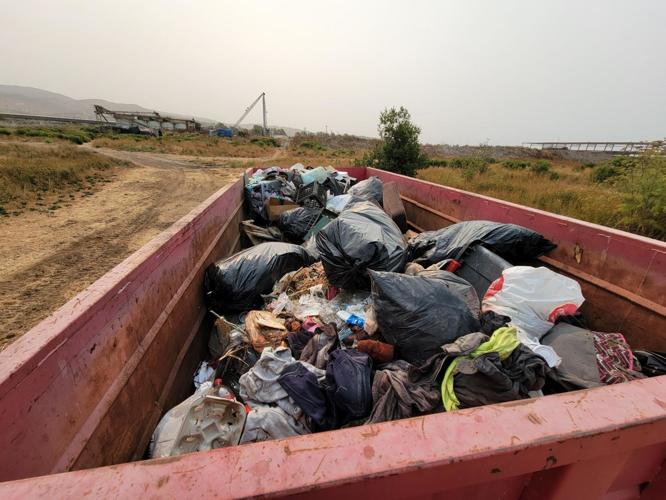 A dumpster full of trash collected from the Kennedy Park homeless encampment.

In murky fog and smoke-filled air, city of Napa contractors last week carried out a cleanup at the Kennedy Park homeless encampment, located at the remote southern tip of the park near the Napa River, by partnering with the roughly 40 residents of the park to gather up and dispose of garbage.

“Our priority is to taking care of people,” said city of Napa Fire Chief Zach Curren. “And finding out where they are.”

Prior to the cleanup, the city posted paper signs of the “community clean-up day”— the cleanup ultimately ended up lasting from Tuesday through Thursday last week — and asked residents to pile up items they’d like to see removed. Homeless outreach staff was also present at the site during the three days to answer questions and give garbage bags to residents.

That included roughly six dumpsters of garbage, two cords of firewood, one third of a dumpster of lumber, about 60 propane tanks and several couches, according to Rattigan. Additionally, she said, no hypodermic needles were found at the encampment — as a safety hazard, they would’ve needed to be removed — and three fire pits at the site were filled in.

Curren estimated the encampment started up in Kennedy Park about eight or nine years ago, and has grown in size throughout the past decade, as Napa’s homeless population has increased. Curren said the city has to balance many competing needs in handling homelessness, including safety of the residents, fire safety and environmental concerns.

Curren also said 8% to 10% of all incidents the Napa Fire Department responds to involve homelessness in some respect — he estimated there’s about 800 incidents involving homelessness each year, which averages out to two or three each day — whether it be a response to fires or medical events. The number of incidents related to homelessness has only increased over time, he said, taking up a progressively greater amount of the department’s time and resources.

“[Getting there] can take the whole response time,” Curren said. “And most of the events are totally preventable.”

Rattigan said the ultimate goal of the city’s homeless response is to find permanent, supportive housing for homeless Napa residents. But, she said, the city can’t force anyone to accept housing or support, so the city’s approach currently involves trying to mitigate potential problems: proactively checking in with homeless residents, building relationships with them, providing assistance and keeping an eye out for environmental and safety issues.

Napa County’s one-day point-in-time count of homeless residents in 2020 tallied 464 people. The county didn’t count homeless residents this year because of safety concerns around COVID-19. Indeed, Rattigan said, the local impacts of COVID-19 on the homeless population — and the less visible population on the verge of homelessness, those who have lost jobs or housing and may be couch surfing — remain to be seen.

Brandon Gardner, homeless outreach coordinator for the Napa Police Department, said residents of Kennedy Park ended up homeless for various reasons, and they remain in unique circumstances. Several of the residents have jobs, he said, but many haven’t been able to find a place to rent because of high rental prices in Napa and the low availability of affordable housing.  Regardless, he added, the individual circumstances of the residents tend to be complex.

“In a lot of cases, everything went south,” Gardner said. “Or they can’t find a place because of rental prices. Many were dealt a bad card; some want to be homeless.”

Gardner also said the city, in partnership with homeless services provider Abode Services, has had some success in transitioning homeless residents to housing. One resident of the Kennedy Park encampment had received a Section 8 housing voucher, he said, and is preparing to move out of the encampment.

“The better that we can connect our homeless population to services, that’s when those success stories happen,” Gardner said.

Jenna Bolyarde, housing program manager for Abode, said the organization’s outreach teams are very familiar with the residents at Kennedy Park, and often support the residents by, for example, distributing water on hot days.

“We run outreach teams who visit with clients who are still homeless and camping,” Bolyarde said. “Their goal is to build rapport because there’s often distrust between clients and the provider.”

Outreach teams may try, after building trust, to bring in homeless residents to the South Napa Shelter, or get them on the waiting list for it, Bolyarde said. Abode also carries out housing programs and follows a Housing First policy, she said, which means the organization believes placing homeless residents into housing is generally the most important step in taking on the homelessness crisis.

“We develop relationships. We don’t just go out and say the steps we take. It’s about establishing trust,” Bolyarde said. “When I say relationship, I’m saying we follow through with what we say we do for our clients; we show up. We establish a rapport and open communication; they are allowed to voice their concerns.”

Abode runs a permanent supportive housing program and a rapid re-housing program to support homeless residents, Bolyarde said, and the organization works with the city of Napa Housing Authority to figure out housing locations for homeless residents. Abode also works to establish relationships with local landlords so that housing for homeless clients can be more easily found, she said.

“With housing, we work to stabilize residents and connect them to resources that they may not have been able to connect with,” Bolyarde said. “It’s really hard to keep diabetes in order when you’re living in a tent.”

The cart was found submerged near the downtown First Street bridge around 8:30 a.m. Monday, according to Napa Fire.

Since July 2020, Homekey has led to the creation of 6,000 affordable housing units statewide.

Study: The asteroid that killed the dinosaurs produced a nearly 3 mile high wave

Study: The asteroid that killed the dinosaurs produced a nearly 3 mile high wave

A portion of the Kennedy Park encampment before last week's cleanup.

Propane tanks in the Kennedy Park homeless encampment, ready to be picked up as trash.

A dumpster full of trash collected from the Kennedy Park homeless encampment.