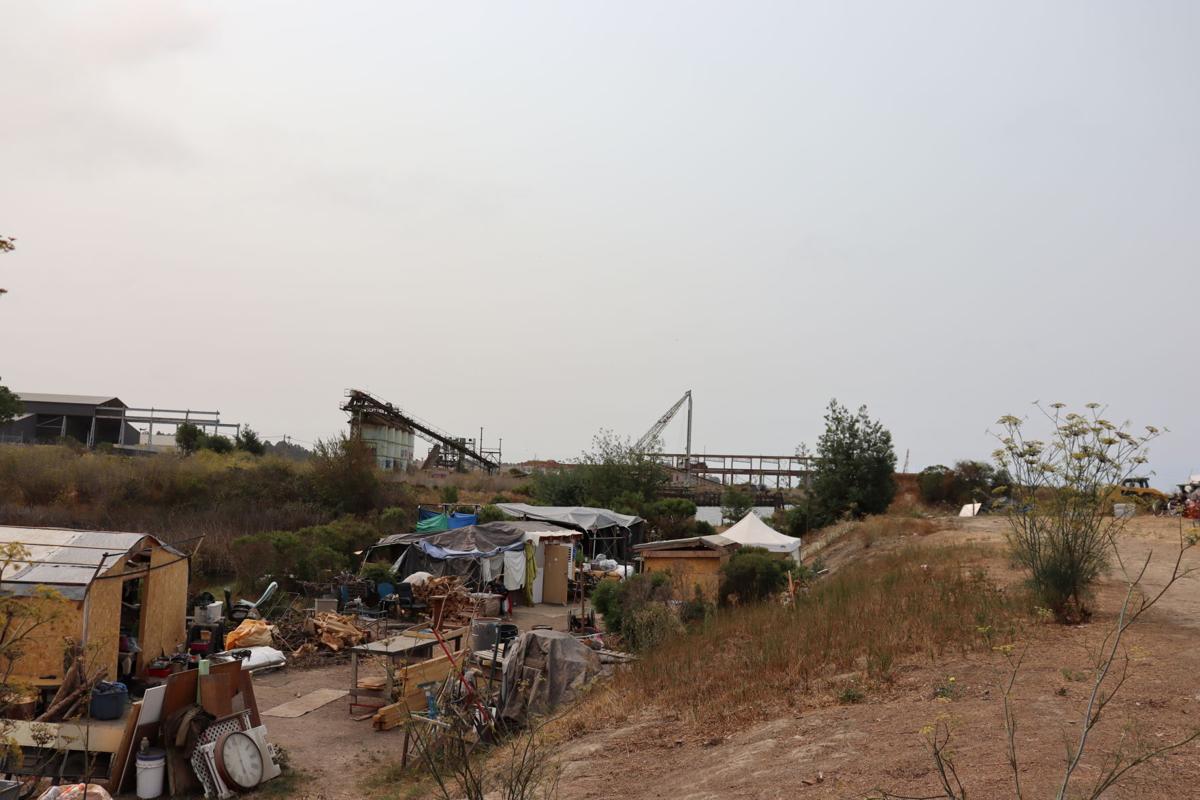 The Kennedy Park homeless encampment has been cleaned up twice recently, once in August and once last week. 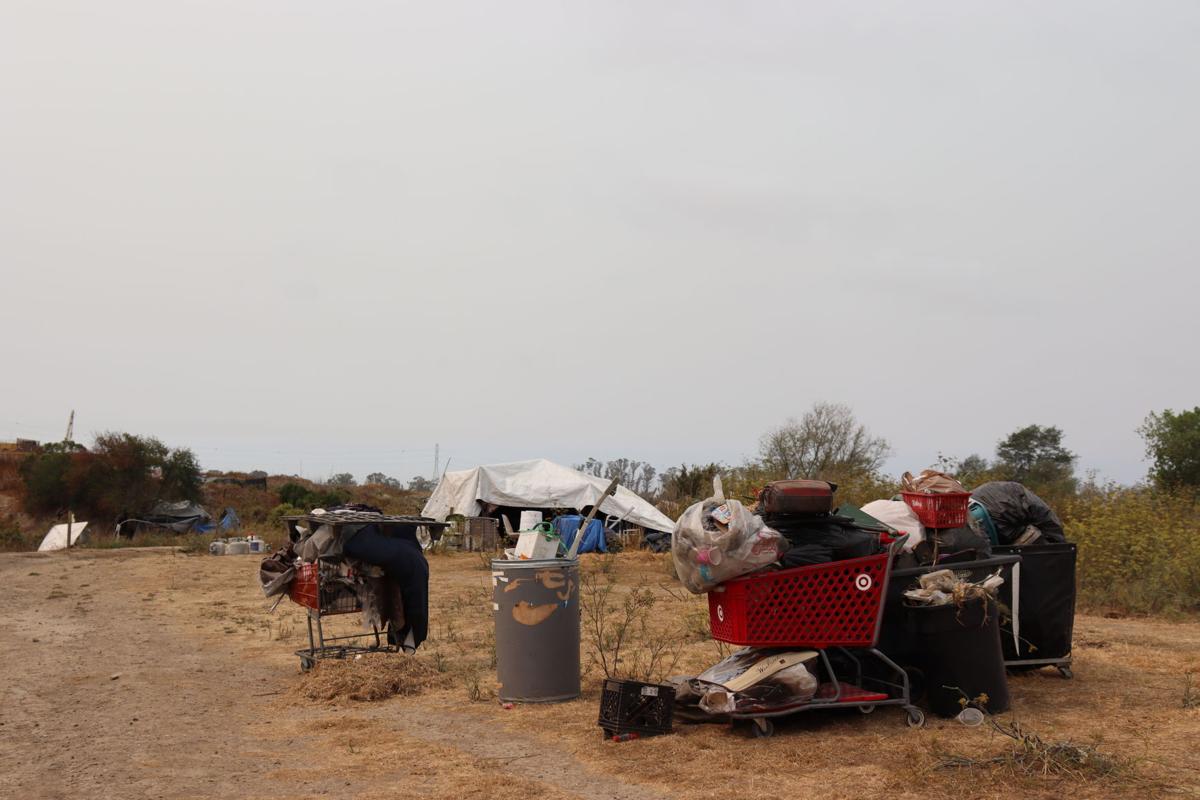 Homeless residents of Kennedy Park in August were asked by the city of Napa to pile up whatever they wanted to dispose of.

Following two stages of homeless encampment cleanups, the city of Napa is planning to clean up city property most affected by homelessness with greater regularity.

City cleanup crews went to the Kennedy Park homeless encampment, located at the southern tip of the park, last week and disposed of trash and safety hazards. The cleanup was held in the same style of a collaborative cleanup at the encampment in August, said Molly Rattigan, the city’s point person on homelessness, at a Napa City Council meeting last week.

And another two cleanups last week were held at a city property on the Silverado Trail and under the Jefferson Street Bridge, Rattigan said.

“The primary purpose was to remove excess trash and to start removing some of the fire and life safety hazards we’re seeing in the encampments, particularly on city-owned property,” Rattigan said. “Our plan is to keep regular maintenance going.”

In total, the cleanup crews removed over 80 cubic yards of trash and 20 yards of lumber from the three locations. That included about nine propane tanks, more than 20 tires and hundreds of used batteries that were properly disposed of, Rattigan said.

That’s in addition to the over 100 yards of material removed — including about 60 propane tanks and roughly six dumpsters of garbage — as a result of the first Kennedy Park cleanup in August.

These recent cleanup efforts don’t involve disrupting homeless residents living in the area or doing anything to disturb dwellings, Rattigan said. The city gives at least a 72 hour courtesy notice that the cleanup crews will be working in the area.

In August, the signs posted at the Kennedy Park encampment informed residents of the “community clean-up day” and asked them to pile up items they’d like to see removed.

“If we ever got to a place where we were removing a camp, the notice would look a little different and definitely have to be 72-hours’ notice, unless it was a critical life and safety issue,” Rattigan said.

Rattigan also said a tremendous amount of effort goes into the city’s cleanup efforts. Even though a contractor — Yerba Buena Engineering & Construction Inc. — handles much of the actual trash removal, the cleanup process effort involves members of the city’s parks, public works and police departments, she said.

The cleanups are beneficial in several important ways, she said.  For one, the cleanups help the residents living in the encampments and limits environmental pollution. (Removing trash from the Kennedy Park encampment, for example, limits the potential for it to end up in the Napa River.)

And the cleanups help keep the sites safe for hundreds of police or fire department calls for service each year, Rattigan said. About 8% of calls for service carried out by the Napa Fire Department are related to homelessness. And about 5% of calls responded to by the Napa Police Department are related to homelessness — though that number is likely higher, and should trend upward as the city works to refine dispatch codes, according to Rattigan.

The city is in the process of figuring out the total cost of police and fire department homelessness-related responses each year, she added.

Rattigan also said the city sometimes receives complaints about local properties owned by CalTrans — the California Department of Transportation — which the city isn’t responsible for. Though the city is in regular communication with CalTrans, she said, the local CalTrans district covers all Bay Area counties and has prioritized other cleanup projects outside of Napa,

CalTrans did recently intensify efforts to clean up highways, roads and other public spaces sometimes affected by homelessness e through the $1.2 billion Clean California program, launched by Gov. Gavin Newsom in July.

But the city of Napa hasn’t had luck bringing CalTrans cleanups into the area because the city doesn’t present the same high level of challenge as other properties in the Bay Area, Rattigan said.

“It’s our understanding that they have a ranking system of sorts and a prioritization system as to what constitutes a cleanup,” Rattigan said. “Typically its major public health issues, or size, or it’s blocking some sort of access for Caltrans or for the general public to use those properties.”

So far this year, Rattigan said, local governments and agencies have served a total of 555 individuals through homeless services programs. That’s on track with the 742 served in 2020, she said, and a bit less than the 906 served in 2019.

But, she said, the city’s response to homelessness is challenged by financial and legal barriers, and a need to operate in tandem with other agencies taking on the homelessness crisis.

“Homeless services in the city of Napa are just one piece of the puzzle,” Rattigan said.

Editor's Note: This item has been amended to correct which entities served the 555 clients through homelessness programs.

October 14 recap: Napa Valley news you may have missed today

The bill also would have required that state boards and commissions have at least one board member or commissioner from an underrepresented community.

A new state health care system is set to bring a slew of changes to how many of Napa's homeless services are funded starting next year.

What began as an office cabinet filled with Cup Noodles and granola bars became a food pantry for college students in need. This fall, Napa Va…

Fire breaks out at The Bowl encampment in Napa; no injuries reported

Fire crews were able to contain flames at the encampment within an hour and with no injuries, according to Napa Fire.

City of Napa contractors cleaned up the Kennedy Park homeless encampment last week, in partnership with the residents.

Landlord incentive program for renting to Section 8 tenants continues on

The program gives bonus payments to landlords for renting to eligible tenants, as well as mitigation payments.

Emergency housing vouchers set to go to Napa's most vulnerable

The city of Napa Housing Authority gained access to 45 emergency housing vouchers last month, specifically to give to people who are on the verge of homelessness, experiencing homelessness or attempting to flee domestic violence, among other categories.

The Kennedy Park homeless encampment has been cleaned up twice recently, once in August and once last week.

Homeless residents of Kennedy Park in August were asked by the city of Napa to pile up whatever they wanted to dispose of.