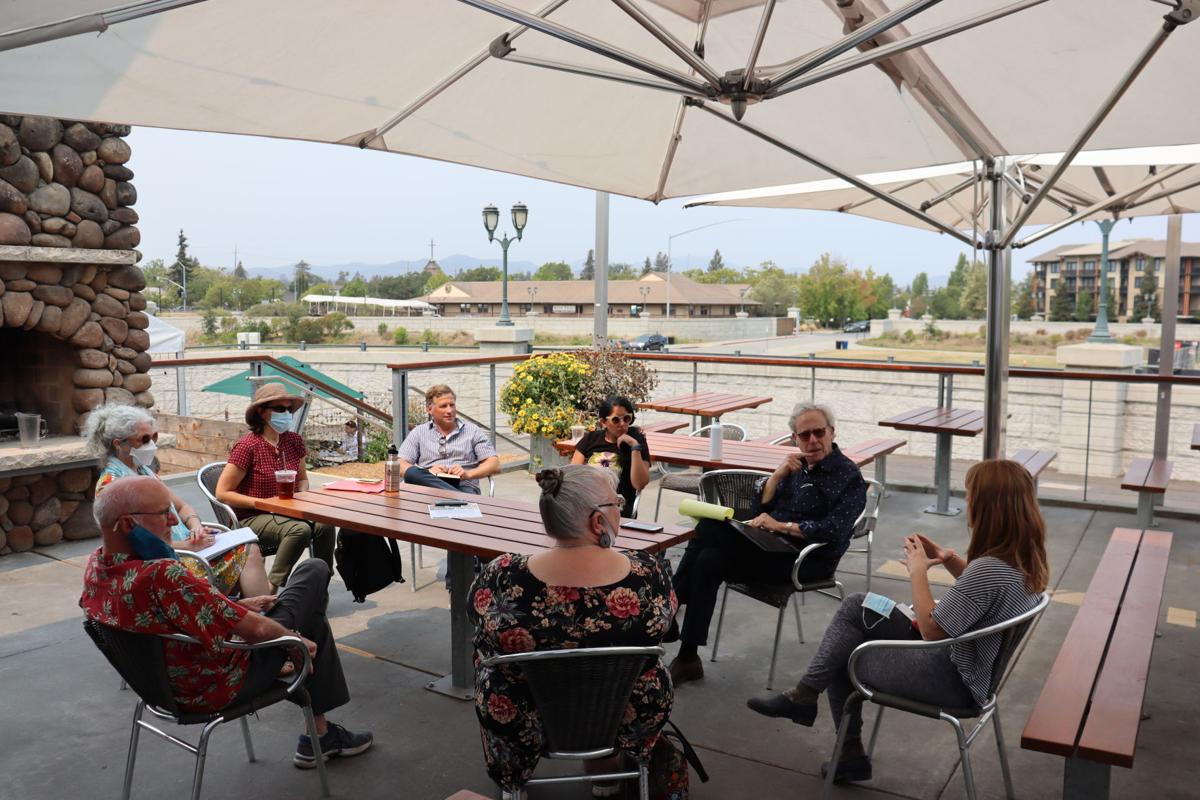 Representatives from the city of Napa, Artspace and PlaceMade met with community members last week to discuss the needs of makers and manufacturers in Napa. 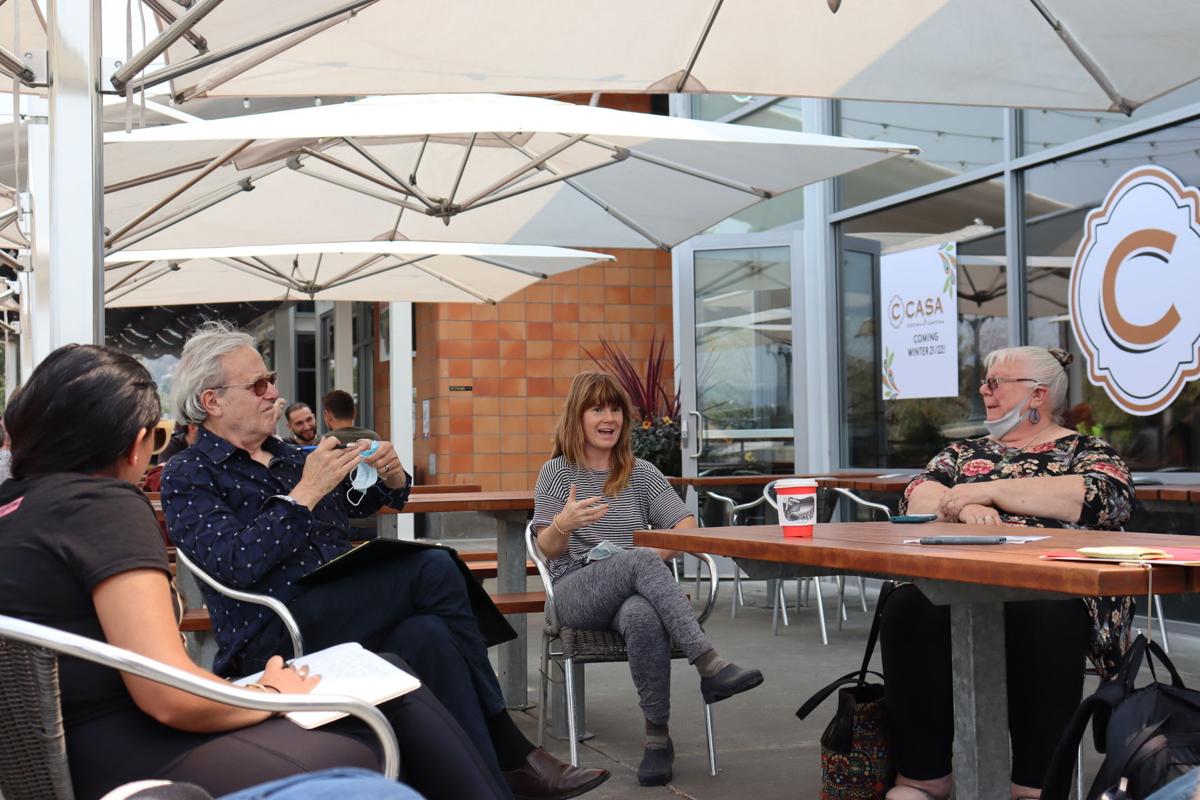 At the Make it in Napa meeting, attendees listen to Jordan Felling, a founder of Napa Makes.

The city of Napa’s new Make it in Napa Initiative is aiming to, ideally, find, fund, or build affordable spaces in Napa to assist local artists, creatives, makers and manufacturers.

But even if the financing isn’t immediately available, or if appropriate spaces can’t be swiftly found, the initiative is set to bring about a plan that supports the needs of creative people in Napa, said Neal Harrison, development project coordinator for the city.

“The studio and housing is just like, top of the list of people’s needs when you’re talking to ... different focus groups we’ve had,” Harrison said.  “It’s top of mind, but there are other things that can be done to help. We’re looking at it from many different angles.”

Those guiding the initiative — the city’s economic development division alongside nonprofits PlaceMade and Artspace — are in the process of assessing the needs of artists and makers who live or work in Napa or might want to. Much of that evaluation is being achieved with a survey, which runs until Sept. 19 and is designed to obtain an overview of needs from as broad a swath of creative people as possible. As of as last week, those carrying out the initiative have also been discussing the possibilities with Napa residents.

“So whether you’re a maker, you’re a hair designer, a fashion designer, a formal artist, whatever that might be. If you’re working with creativity in some way we want to help serve you and your family,” said Teri Deaver, vice president of Artspace consulting.

Harrison referred to the current step in the process as “phase 2.” The first phase, he said, occurred in 2019, and was inspired by a report from the Bay Area Council Economic Institute that said Napa was missing opportunities to grow its creative and manufacturing sectors. Artspace and PlaceMade, working with the city, determined at the time that investments could improve the city’s offerings for creatives, Harrison added.

Deaver said in 2019 the two nonprofits had listened to focus groups, looked at potential locations the city thought would be great for reuse, and then modeled a concept of a facility that would have affordable artist housing, makerspaces and a community engagement component — “a kind of campus facility that would be a place people could make, work, live and share with the community,” she said.

Now, Harrison added, the team is trying to drill down and figure out the specifics of what Napa’s creative community really needs. The action plan developed by the nonprofits will be delivered to the city in October or November, he said, which will give the city a path for where to take the initiative next.

“This phase two has two purposes,” Harrison said. “One is to get that market data that quantify the demand for a physical space. Understanding what people will pay, which people will come to Napa, will people want to use studio space or housing that’s built. The second part of this phase 2 work is, Artspace and PlaceMade are putting together an action plan. A playbook of what are specific things the city can do to help makers and manufacturers.”

Harrison said manufacturing is a huge part of the local economy and connects to the supply chain of the wine industry. But local manufactures have struggled with the cost of labor and space, he said. Gina Falsetto, Project Director of PlaceMade, said creating jobs is an important part of the initiative and the local creative and manufacturing industries will hopefully be able to support each other as a result of future shared space or other actions.

Deaver said the Minneapolis-based Artspace primarily works to create and preserve self-sustaining and affordable spaces for artists. The organization currently has 55 real estate development projects, primarily live-work spaces for artists and their families. Though half of the projects are located in Minnesota, Artspace previously worked to build the 100-unit Tannery Lofts and the Tannery Arts Center in Santa Cruz.

Deaver compared current-day Napa to Santa Cruz in the early 2000s, which she said saw a surge in housing prices that forced many young artists to leave the city. She said similar situations have popped up across the Bay Area and California as a whole as housing prices have risen.

“People who grew up in Santa Cruz, maybe went to school there, had absolutely no way of staying there,” Deaver said. “Napa is similar. You’ve seen the trend: it started when San Fransisco became unaffordable, then Oakland became a place where artists went, and that became unaffordable.”

Deaver added that the housing crisis is considerably larger than just the art world, but the lack of affordable space affects artists — who often work other jobs or need extra studio space to work — like it affects everyone else.

“The reason people go places is to experience something that is unique about that space,” Deaver said. “Napa is known for the wine region, but it also has all these amazing makers and creative people. We’re trying to make sure they can stay here and continue as well.”

Dave Koz on music, the pandemic and playing in Napa Valley

Saxaphonist Dave Koz and his band perform at Blue Note Napa's stage at Charles Krug Winery on Aug. 28 and 29.

Jessel Gallery will host a preview of Open Studios Napa Valley on Sept. 4 and 5, and news from Bay Area writers.

Food and wine and chefs at BottleRock

BottleRock 2021 has announced an all-star line-up of chefs who will team up with musicians on the Williams Sonoma Culinary stage at the festival on Sept. 3-5.

The Mia Carta collective of premium, small-lot, Napa Valley family-owned and operated wineries offers the opportunity to discover six lesser-known producers of local wines. The tasting lounge may be new, but the friendships are not.

'Her Story in America' opens at the White Barn

“Her Story in America,” a tribute to women who have been influential in helping our country move forward politically, socially and culturally will be at the the White Barn in St. Helena on Friday, Aug. 27 through Sunday, Aug. 29.

City of Napa reinvests in parks and infrastructure with budget surplus

Millions of dollars are headed back to sidewalks, city parks and other areas cut back by the City of Napa because the city generated more revenues than expected this past fiscal year.

Representatives from the city of Napa, Artspace and PlaceMade met with community members last week to discuss the needs of makers and manufacturers in Napa.

At the Make it in Napa meeting, attendees listen to Jordan Felling, a founder of Napa Makes.