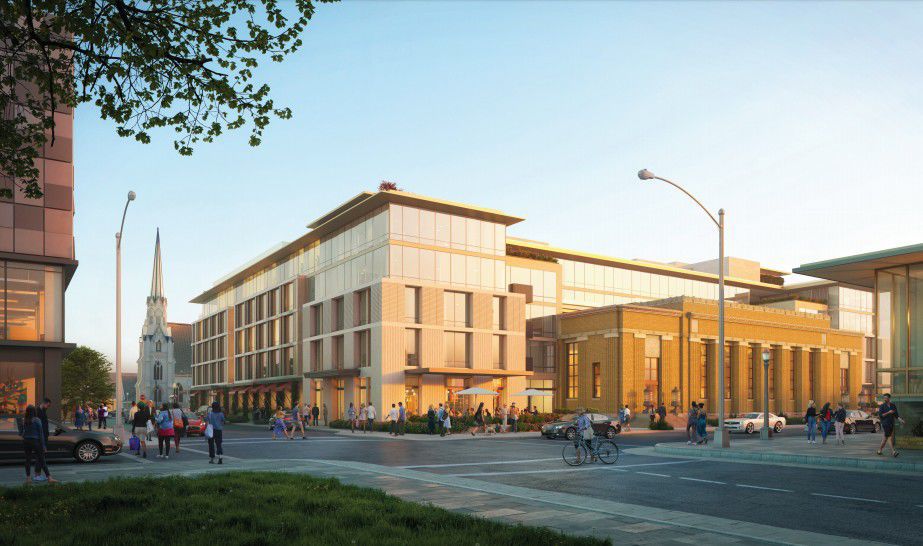 The Napa developer Jim Keller proposes to rehabilitate the earthquake-damaged Franklin Station post office on Second Street as part of a 163-room hotel, which would go up around and behind the Art Deco landmark from the 1930s. Napa's city planning and cultural heritage commissions will evaluate the project at a joint meeting Thursday night.

Blue Oak School has proposed this new two-story building on Seminary Street in downtown Napa to serve as the new home of its middle-school program, replacing an existing campus on Hayes Street.

The plan to recast downtown Napa’s 1930s-area post office building into a 163-room hotel will go back before city land-use and historic preservation authorities Thursday night.

Napa’s Planning and Cultural Heritage commissions are to meet jointly at 7:30 p.m. to study the five-story, 175,000-square-foot boutique hotel that would incorporate the Franklin Station post office, a tan-brick example of Art Deco design at 1351 Second St. that has been vacant since it was damaged by the 2014 earthquake. The meeting will be a step toward future decisions on granting developer Jim Keller a design permit and affirming the historic preservation of the landmark, which was built in 1933 and has been on the National Register of Historic Places since 1985.

In addition to the hotel project, city officials also will review a mechanized parking garage slated to replace a city-owned parking lot east of the post office at Second and Randolph streets. The structure would include space for 240 vehicles – 65 for the general public and the rest for hotel guests – above ground-floor retail stores and office space on the second floor.

The hotel’s footprint would occupy much of the downtown block bounded by Second, Franklin and Randolph streets, as well as Randolph between Second and Third streets. It also would extend south into the parcel currently occupied by Zeller’s Ace Hardware on Third Street.

The project will cost more than $100 million, Keller, who is partnering with Cypress Equities of Dallas, estimated in September.

Keller purchased the Franklin Station building in 2017 for $2 million from the U.S. Postal Service, which earlier had triggered an outcry among Napa residents and preservationists when it announced plans to tear down the landmark for $500,000, rather than spend the $8 million it said was necessary to repair and reopen it.

Napa opened the way to the hotel project in 2018, when the City Council approved a rezoning of the property to allow for mixed uses and a maximum building height of 60 feet.

Keller shared an early version of the hotel project with city planners in June 2019, with sketches showing a newly built structure of metal and plate glass enveloping the historic facade and extending upward behind it. At the time, some observers objected to the size and scale of the annex to the original post office, saying it overwhelmed and partially obscured the core structure from the 1930s.

Revised plans filed with the city show an annex set farther back from both Second Street and the post office lobby, which will be renovated to house the hotel’s lobby and bar. The building will feature two restaurants, two bars, meeting space, a spa and a fitness center, as well as a rooftop swimming pool and lounge.

City guidelines for downtown historic structures will require the developer to retain key design elements of the post office. Among those elements are the facade, windows, staircase and the urn-shaped light fixtures on Second Street, as well as the lobby’s hanging lamps, ceiling, terrazzo floor and other decoration, according to a city memorandum published Friday.

The Franklin Station project is one of two hotel proposals scheduled to go before the Planning Commission on Thursday. Earlier, the agency will review the First and Oxbow Gateway Project, which includes a pair of hotel buildings slated to straddle both sides of the Napa Valley Wine Train line east of Soscol Avenue at First Street.

Planners also will review a proposed new middle-school campus for the Blue Oak School, a private academy for students from kindergarten to the eighth grade. The project at 1120 Seminary St. is to include a two-story, 11,450-square-foot building with eight classrooms, along with a 10,000-square-foot gymnasium.

The new campus would be built across Polk Street from Blue Oak’s existing classrooms for elementary grades, and would replace its existing middle-school site a half-mile away at 1272 Hayes St.

Due to Napa County’s social distancing rules during the coronavirus pandemic, the Thursday meeting will be conducted as a teleconference. Viewers may watch the meeting on local cable television at Xfinity Channel 28 or online at cityofnapa.org, and take part in public comment periods through the Zoom program or send emails to the Planning Commission in advance.

Video: Things you won’t see in hotels anymore thanks to COVID-19.

The meeting will be conducted via teleconference due to Napa County social distancing rules during the coronavirus pandemic. It can be viewed on Xfinity public-access cable Channel 28, or online at cityofnapa.org.

To participate in public comment periods during the meeting, watch the Zoom livestream at https://us02web.zoom.us/j/87644170831 and click the “raise hand” button.

To participate by telephone, dial 669-900-6833. When prompted, enter meeting number 876 4417 0831 and then press *9 to raise your hand for the item you wish to comment on. Speakers will be notified shortly before they are called to speak.

Comments also can be emailed to the city before or during the meeting to planningcommission@cityofnapa.org.

A 74-room hotel lining both sides of the Wine Train tracks will go before Napa city planners Thursday, July 16.

Napa County has the fourth highest per capita assessed value of California’s 58 counties.

The end of an era: Calistoga's Silverado Ace Hardware to change hands

The Napa developer Jim Keller proposes to rehabilitate the earthquake-damaged Franklin Station post office on Second Street as part of a 163-room hotel, which would go up around and behind the Art Deco landmark from the 1930s. Napa's city planning and cultural heritage commissions will evaluate the project at a joint meeting Thursday night.

Blue Oak School has proposed this new two-story building on Seminary Street in downtown Napa to serve as the new home of its middle-school program, replacing an existing campus on Hayes Street.