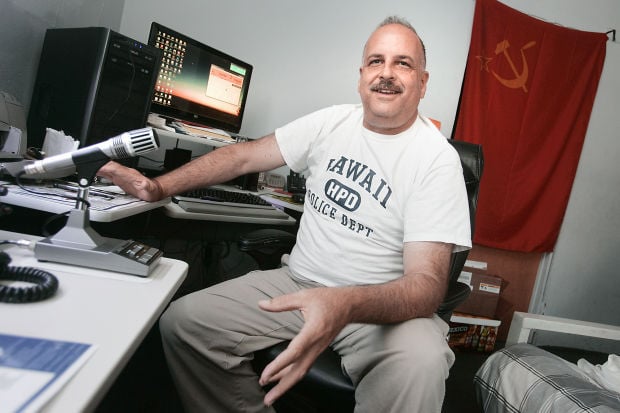 Jeff Hullquist has erected a 55-foot-tall horizontal high-frequency antenna behind his Coombs Street home, angering neighbors who have described it as a nuisance. On Thursday, the city Planning Commission granted his antenna a permit but imposed restrictions, including a requirement to lower it during daylight hours. 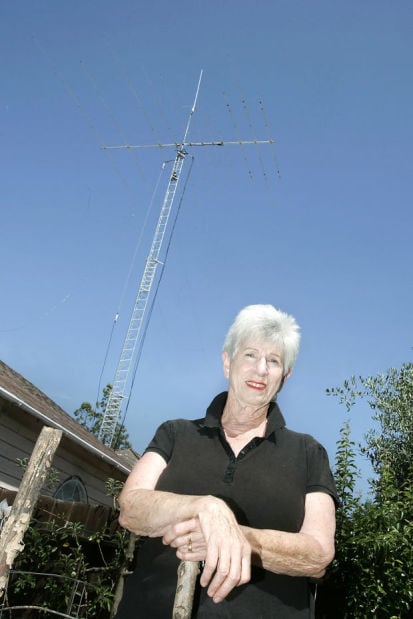 Because of complaints from neighbors, including Randolph Street resident Kathleen Wolf, the Planning Commission on Thursday imposed restrictions on her neighbor, Jeff Hullquist, who has put up a 55-foot tall antenna in his backyard.

For several residents of Coombs Street in Napa, Jeff Hullquist is their least favorite neighbor – or rather, the 55-foot-tall antenna outside his house is.

Since the longtime amateur radio enthusiast raised the spidery metal mast in April, some homeowners have attacked it for spoiling their views, and others claim the antenna has even disrupted their electronics – or, in one case, disabled a woman’s electric wheelchair.

But their efforts to fight the mast in their midst has bumped against federal law Hullquist argues protects his right to build and use the antenna, even without a city permit.

On Thursday, the city Planning Commission granted him a use permit for the ham radio antenna – but with limitations including a requirement to lower the mast to 21 feet between 6 a.m. and 6 p.m. to avoid intruding on his neighbors’ views. (The city allowed an exemption to transmit during a local emergency.) Hullquist also was barred from operating his transmitter while the antenna is retracted.

Afterward, Hullquist promised to appeal his case to the City Council – which also is scheduled to hear a counter-appeal from an opponent of the antenna.

The decision continues a seven-month stalemate pitting Coombs Street homeowners – who say the antenna also disfigures the Napa Abajo-Fuller Park Historic District that includes the street – against Hullquist, who has argued a Federal Communications Commission memorandum from 1985 blocks cities from passing laws that make ham radio use impossible.

In that ruling, which resulted from a radio club’s bid to void antenna height restrictions in San Diego and other cities, the FCC did not set a national height limit overriding local laws, but did require local limits set for health, safety or aesthetic reasons to “represent the minimum practicable regulation to accomplish the local authority’s legitimate purpose.”

The conflict of local and federal law weighed on commissioners even as they approved limits on the Coombs Street antenna. Tom Trzesniewski, the only dissenter in a 4-1 vote, doubted the city’s standing to curb Hullquist’s radio equipment and said he was not willing to act against him solely based on his neighbors’ opposition.

“I do understand the neighbors’ (opposition),” he said. “I wouldn’t want to see a 55-foot antenna in my neighborhood. But I have to do what is right.”

Ham radio is a hobby in which licensed amateur radio operators, or hams, communicate over frequencies the FCC reserves for their use. Operators must pass a FCC examination to gain the license needed to use amateur radio bands, and federal laws protect citizens’ rights to use the airwaves.

Amateur radio enthusiasts also prize their technology’s use for emergency communication when Internet or cellular service is disabled. Local towns often train volunteers to become ham operators in case of a natural disaster, a point Hullquist emphasized in light of the August earthquake.

Hullquist’s radio mast became the source of discord shortly after its installation in April. When Kathleen Wolf, a neighbor whose family has owned her home for four generations, discovered it upon returning home from a three-month trip to France, she soon got several residents’ signatures on a complaint letter delivered to the city.

Among the Coombs Street residents who spoke Thursday, the irritation with their neighbor had not been soothed.

“I ask you as a commission: is this reasonable?” said Lon Gallagher, who moved to Coombs Street two years ago and fears his house losing value due to the antenna. On the City Hall video projector, he showed commissioners the views from several rooms of his home, all of them apparently overshadowed by Hullquist’s radio rig.

“I support someone’s right to his hobby as much as anyone, but this is insane; 55 feet in this neighborhood is insane,” he said. “I assure you, we would not have bought our house had that antenna been there at the time.”

Edward Tripp, whose home is three lots away from Hullquist’s, warned the city that abdicating its right to regulate the ham radio tower could encourage him or others to flout the permitting process further.

After other neighborhood residents complained of disrupted Wi-Fi and cellular service they linked to the ham radio system, Hullquist called those claims unfounded because of amateur radio’s unique frequencies – and added he has avoided taking to the airwaves during the permitting process.

“I haven’t used the radio purposely,” he said. “I haven’t talked on the air for five or six months, so these complaints are not related to anything I’m doing.”

Several commissioners questioned Hullquist’s decision to raise the antenna without immediately seeking a city permit, based on his assertion that ham radio users with licenses older than Napa’s height ordinance, which dates to 1989, need not seek a permit.

“I think we have the classic ‘It’s better to ask forgiveness than ask permission’ situation here,” said Commissioner Gordon Huether. “I can’t believe that you’d building something to code (but) think you wouldn’t need a permit. … I wouldn’t want to encroach into someone’s legal hobby, but a hobby ends where it encroaches into someone else’s life.”

Faced with Hullquist’s 55-foot fait accompli, commissioners and a city lawyer struggled both to find common ground with the ham radio operator and to find a solution that wouldn’t invite yet more debate.

After Deputy City Attorney Peter Spoerl tried to assure commissioners of their right to regulate the height and visual impact of structures, Huether asked: “Does that include denying this use permit?”

“I think that would be problematic,” Spoerl replied.

Hullquist’s planned appeal of the antenna ruling will not be the only one to reach the City Council. After the Cultural Heritage Commission granted the structure a certificate of appropriateness – a requirement within a historic district – Gallagher, the Coombs Street homeowner, appealed that decision to the council, which is tentatively scheduled to weigh the matter Dec. 16.

When Napa resident Kathleen Wolf returned to her Randolph Street home in April, following a three-month trip to France, she was surprised to s…

After years of weighing the benefits of a public wireless Internet network for its downtown, Napa may be moving away from routers and toward c…

Help us carry on emergency communications

The Silverado Amateur Radio Society (SARS) may no longer have a space in which to hold its monthly meetings. That would inevitably lead to a d…

Jeff Hullquist has erected a 55-foot-tall horizontal high-frequency antenna behind his Coombs Street home, angering neighbors who have described it as a nuisance. On Thursday, the city Planning Commission granted his antenna a permit but imposed restrictions, including a requirement to lower it during daylight hours.

Because of complaints from neighbors, including Randolph Street resident Kathleen Wolf, the Planning Commission on Thursday imposed restrictions on her neighbor, Jeff Hullquist, who has put up a 55-foot tall antenna in his backyard.