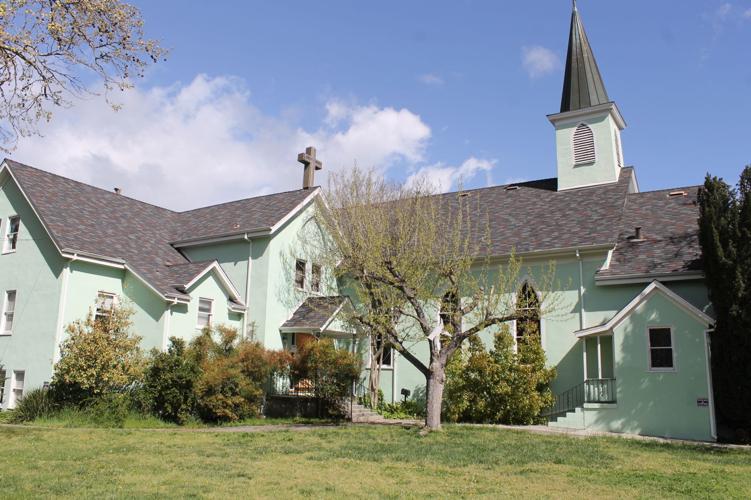 The Community Presbyterian Church of Calistoga, also known as the “Green Church,” has been closed due to code violations and mold. 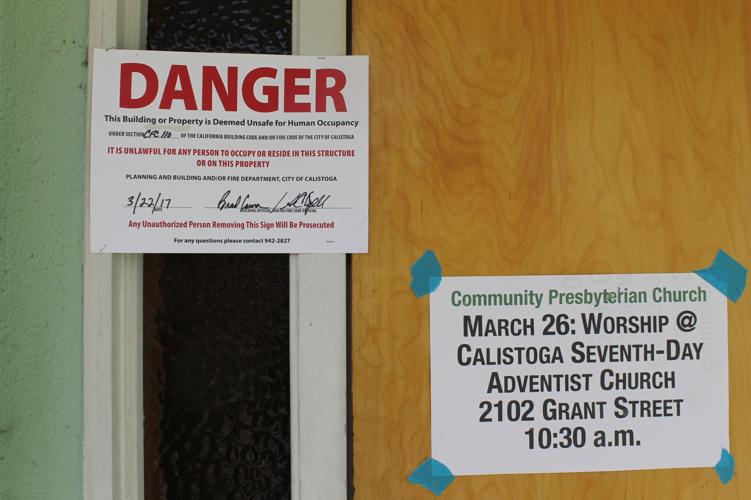 A sign placed by the city declaring the church unsafe, next to a sign announcing Sunday services are being held at the Calistoga Seventh-day Adventist Church.

CALISTOGA — Code violations, safety hazards, and mold wafting up from a basement that’s prone to flooding have forced the closure of the Community Presbyterian Church at Third and Washington streets, leaving it unclear when the local landmark will reopen.

The city issued a letter last Thursday detailing various problems that must be corrected before the 145-year-old “Green Church” can be declared safe, including electrical issues (overloaded circuits, ungrounded “knob-and-tube” wiring, the heavy use of extension cords), an unsafe stove and exhaust system in the kitchen, inadequate emergency exits and wheelchair accessibility, and a plaster ceiling that cracked during the 2014 Napa earthquake and could fall and hurt someone.

Stormwater has flooded the basement repeatedly over the years, contributing to the growth of mold. The church will have to install a ventilation system, put sealed barriers between the basement and the upstairs areas, and submit an air quality report.

Pastor David Moon-Wainwright met Tuesday with an air quality consultant who took samples to test for mold. He said the church’s next steps will depend on how much it collects from its insurance company.

Regardless of the amount of the settlement, bringing the church up to code will be a significant challenge for the church, which has 26 mostly elderly members and an average Sunday attendance of between 10 and 14.

“At some point, there’s either going to have to be a lot of fundraising or a rather large loan taken or something,” Moon-Wainwright said. “That’s going to be difficult for an aging congregation. ... Without a younger congregation to keep things going — it’s a hard equation right now.”

He said the problems are mostly confined to a part of the church that was added about 65 years ago, not the 145-year-old sanctuary. It’s too soon to say for sure, but one option might be to seal off the basement and the newer areas and only use the original sanctuary, he said.

In the meantime, Moon-Wainwright asked everyone who has keys to the church to respect the red tag and stay out of the building. Unauthorized entry could result in consequences, such as removal of the PG&E meter, that would make repairs even more expensive, he said.

Brad Cannon, building inspector for the city of Calistoga, said the problems came to his attention after the church obtained a demolition permit to repair water damage from a bathroom that experienced a major leak around Thanksgiving. Moon-Wainwright said more than 1,000 gallons flowed through the building.

Cannon and Fire Chief Steve Campbell conducted a formal inspection, made a list of recommendations and, after meeting last Wednesday with Moon-Wainwright, an engineering consultant and the church’s insurance adjuster, decided to red-tag the building.

In addition to mold, structural, fire, and emergency egress issues, the church is also dealing with asbestos. Workers already removed some tiles that contained asbestos, and more was found in parts of the water-damaged basement ceiling that were removed.

“There’s a number of deferred maintenance issues that have become pretty serious,” Cannon said. “If there’s a fire and there’s a little old lady in a wheelchair in there, I don’t know how she’s getting out very easily.”

Cannon said the city would consider allowing the church to reopen once all the problems are alleviated except for the basement.

“Let’s get a handle on those first eight items, and maybe the basement is something we could figure out later,” he said.

Moon-Wainwright has been “totally forthcoming” and cooperative throughout the process, Cannon added.

Last weekend, the congregation held services at the Calistoga Seventh-day Adventist Church, and will do so again this Sunday, Moon-Wainwright said. Community activities that were held in the church are also finding alternate spaces.

Moon-Wainwright thanked the local community and neighboring churches for their support and offers of help over the last week.

According to a Calistogan article from 2014, the church was built in 1872 at a cost of $2,300. Since then, it has been moved twice, added to, raised, lowered, and in the 1950s survived a hit from a plane that crashed into the second story while attempting to land at the Gliderport (the pilot survived).

To the best of my knowledge, March 26, 2017 was the first Sunday in 145 years that worship was not held in the sanctuary of Community Presbyte…

We will continue to pray and to worship

We are very thankful for the gifts that have been offered for the repair of the Green Church at Third and Washington streets in Calistoga. We …

A group of civic leaders has pledged to breathe new life into Calistoga's historic Green Church so that it can continue to offer public service to the community.

This 'smart fabric' can contract and lift weight just like muscles

This 'smart fabric' can contract and lift weight just like muscles

All you need to know about classified information

All you need to know about classified information

The Community Presbyterian Church of Calistoga, also known as the “Green Church,” has been closed due to code violations and mold.

A sign placed by the city declaring the church unsafe, next to a sign announcing Sunday services are being held at the Calistoga Seventh-day Adventist Church.