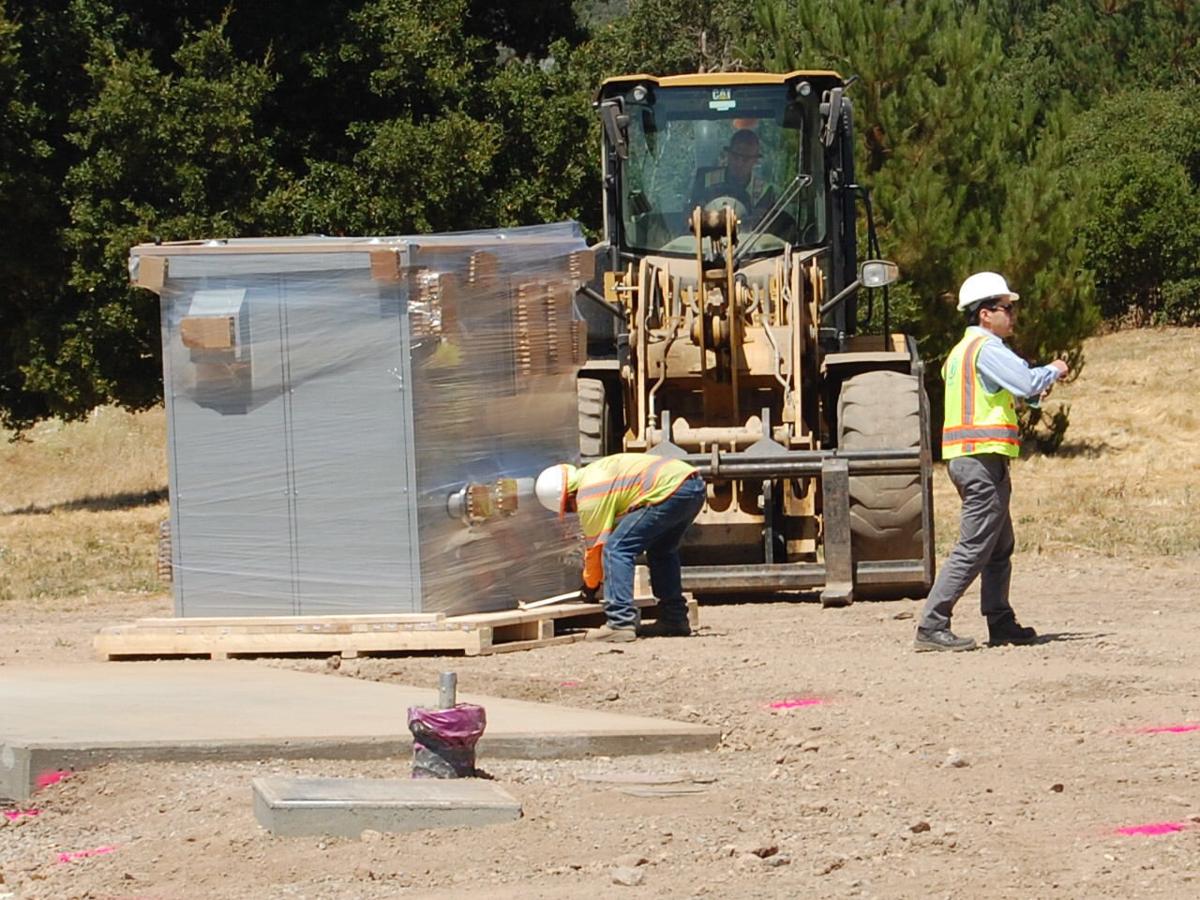 Workers with Team Ghilotti on Wednesday installed the mechanical equipment for a recycled water filling station in Coombsville. The station will provide recycled water for irrigation from the Napa Sanitation District treatment plant. 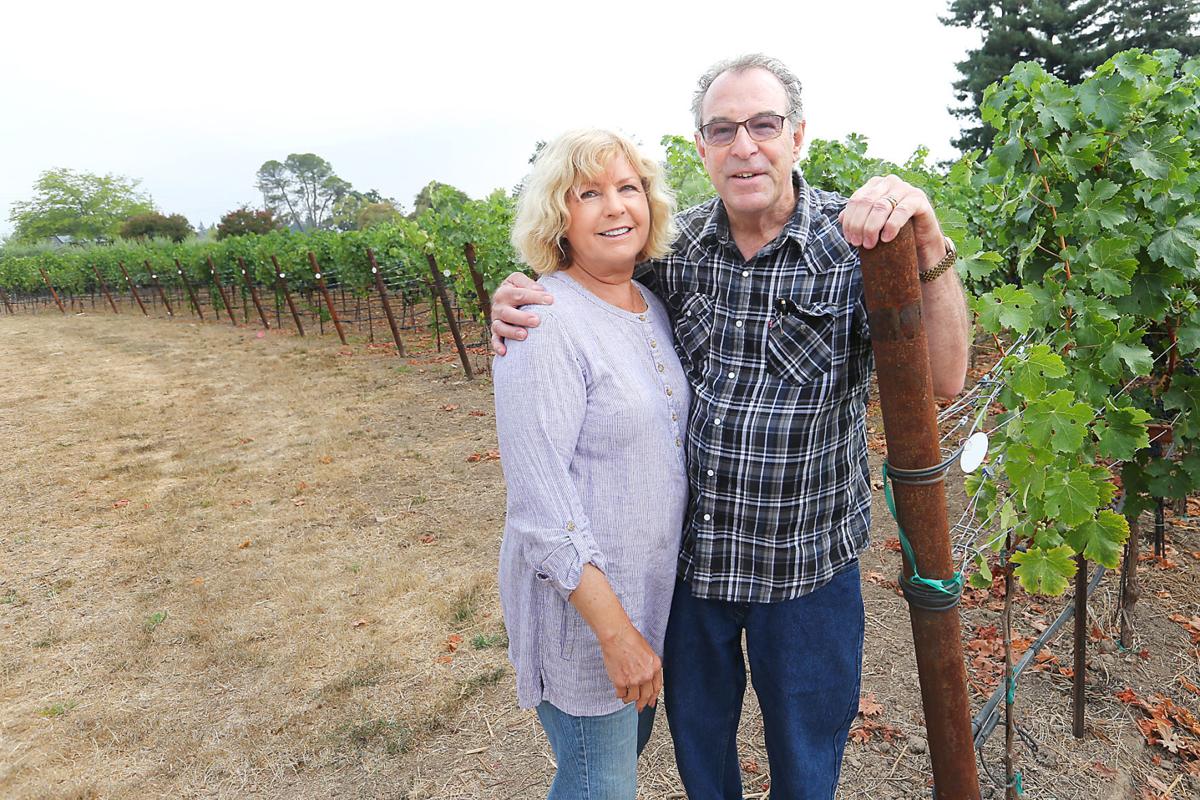 Dr. David Carroll and his wife Betsy at their Monticello Road vineyard. They water the vineyard with recycled water from the NapaSan treatment plant and will soon be able to take advantage of the closer-to-home Coombsville recycled water filling station.

Rural Coombsville is getting a filling station — not for gasoline, but recycled water.

This station will dispense cleaned-up water from the Napa Sanitation District sewage treatment plant. People will be able to sign up, pull up and fill up.

“It’s for anybody who has a truck and gets a permit from us who can use the water for any recycled water purpose,” NapaSan Director of Administrative Services Jeff Tucker said.

That means irrigating vineyards, farms and landscaping areas, not drinking. The small filling station is being constructed at the very eastern edge of the city of Napa along Coombsville Road on an easement provided by adjacent Silverado Middle School. It is to open this summer.

Local veterinarian Dr. David Carroll looks forward to opening day. He irrigates the family’s 2-acre vineyard near Monticello Road with recycled water hauled in a 1,000-gallon tank trailer attached to a pickup, but presently must get the water from the NapaSan plant near the airport industrial area.

“Having a station closer is going to be a wonderful thing,” Carroll said.

Carroll estimated it takes about 75 minutes to drive to the NapaSan plant, fill up with recycled water and return home. He said the new Coombsville station might cut the trip time to 20 minutes.

During growing season, water-hauling trips for the Carroll vineyard might take place one or two days a week. One goal of the Coombsville filling station is to cut down on the mileage for water-hauling trucks on local roads.

“This location brings that type of service much closer to the agriculture on the east side of town who use it,” Tucker said.

The Milliken-Sarco-Tulocay groundwater area beneath Coombsville has been designated “water deficient” by Napa County. NapaSan in 2016 opened a 5-mile-long recycled water pipeline through Coombsville to help out with supplies and extended it by 1.3 miles in 2017.

But people have to be along the pipeline to tap into it for their properties. The filling station will open the recycled water possibilities to a wider audience.

The Carrolls are among those who must make due with the low groundwater levels of Milliken-Sarco-Tulocay and who are removed from the pipeline. The county in 2018 required that their vineyard be irrigated with recycled water only, something the Carrolls had already been doing.

Carroll has talked to other recycled water customers who use the NapaSan sewage treatment plant filling station.

“I don’t know where all the vineyards are located, but I know I’ve run into at least two other gentlemen who are hauling to the Coombsville area,” he said.

The Coombsville station could serve 50 to 60 contracted customers at a rate of about 10 trips per day, the project environmental document said. That would be during growing season. The report found traffic to be no significant impact.

Recycled water will cost $1.78 for 1,000 gallons during peak use months, the same as people pay along the recycled water line, Tucker said.

The water filling station was proposed by NapaSan and Napa County. Team Ghilotti bid $384,000 to build the project. The total cost, including design and environmental work, is $611,000.

NapaSan recycled water is available along pipelines going to such places as the Eagle Vines and Chardonnay golf courses, Napa Valley Commons and the Coombsville and the Carneros agricultural regions. The Coombsville filling station is only the latest project to promote recycled water use.

The recycled water quality has been fine for his vineyard, Carroll said. He harvested 10 tons of Cabernet off his two acres.

Once the Coombsville filling station is in, it will be the only filling station away from the NapaSan treatment plant for the foreseeable future. Tucker said no other stations are planned at this time.

The number of Napa customers using recycled rather than drinkable water for irrigation is growing.

Workers will install another 1.4 miles of pipeline to bring cleaned-up wastewater to turf and crops, the last such local project planned for t…

The Napa Sanitation District must treat between six to 20 million gallons of sewage that enters their systems every day.

A water main failure earlier this month triggered a sewer pipe break and a release into Napa Creek.

Workers with Team Ghilotti on Wednesday installed the mechanical equipment for a recycled water filling station in Coombsville. The station will provide recycled water for irrigation from the Napa Sanitation District treatment plant.

Dr. David Carroll and his wife Betsy at their Monticello Road vineyard. They water the vineyard with recycled water from the NapaSan treatment plant and will soon be able to take advantage of the closer-to-home Coombsville recycled water filling station.