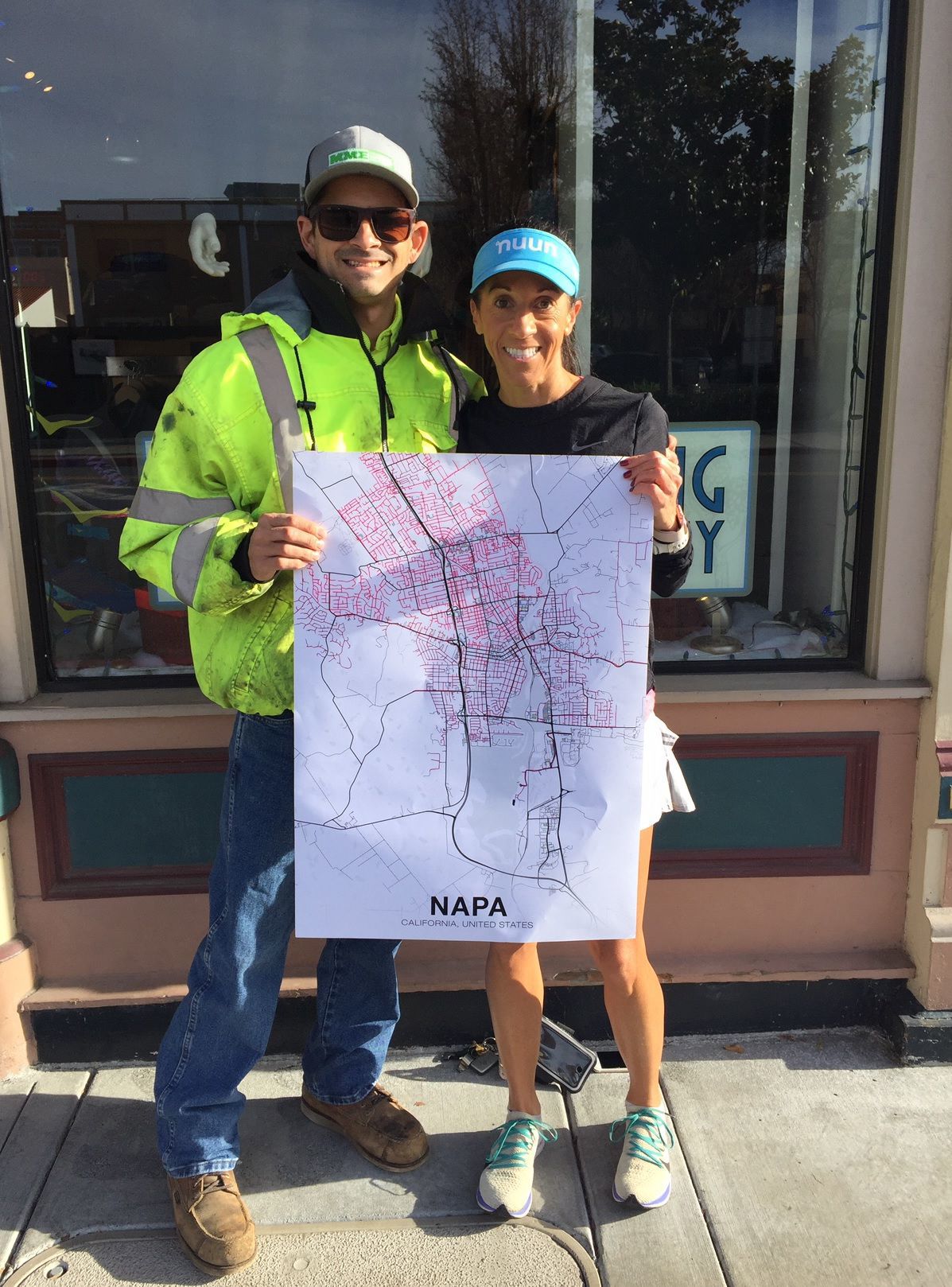 Shari Costanzo and her husband Vennie Costanzo hold the map that shows how she kept track of running every street in Napa this past year. 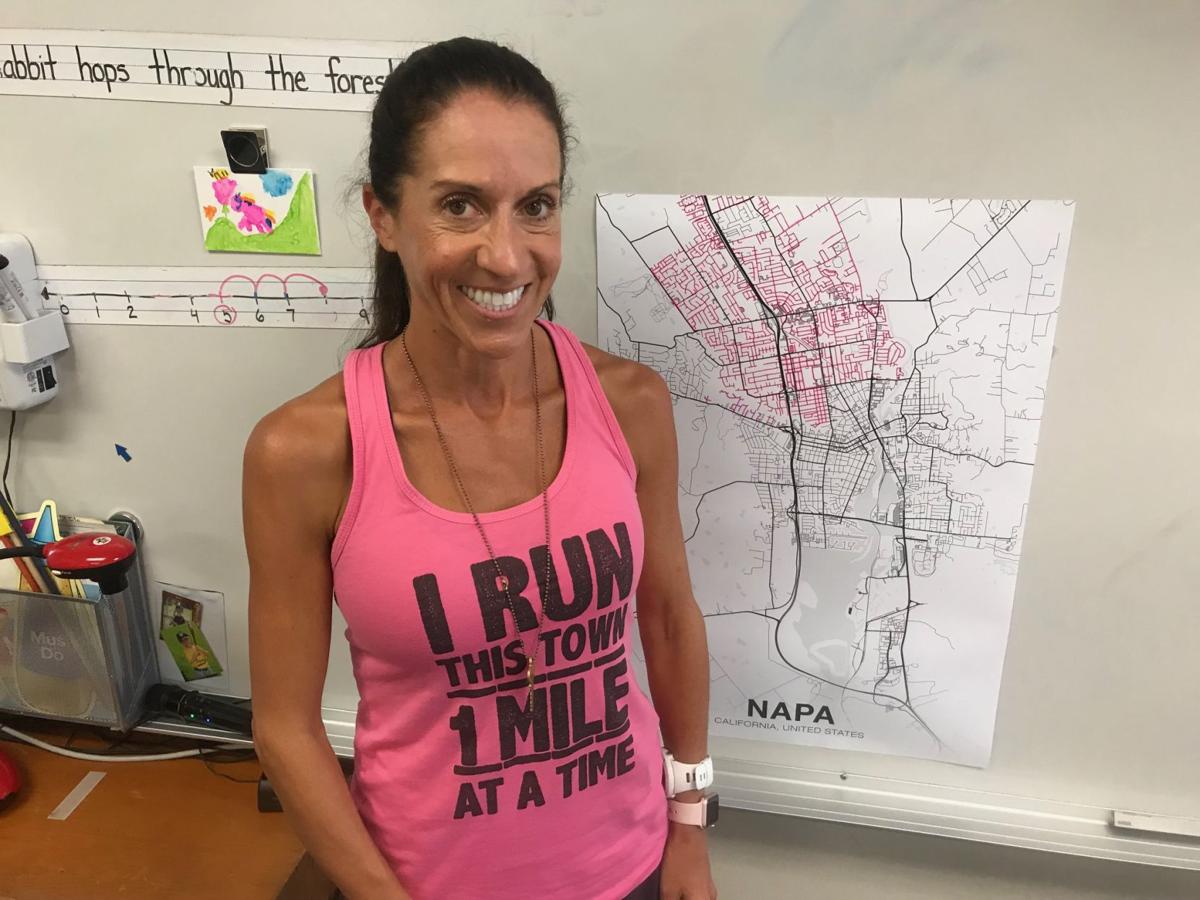 Shari Costanzo, a local runner and elementary school teacher, just completed her quest to run every street in Napa.

Shari Costanzo and her husband Vennie Costanzo hold the map that shows how she kept track of running every street in Napa this past year.

Shari Costanzo, a local runner and elementary school teacher, just completed her quest to run every street in Napa.

Want to know where a certain street is in Napa? Chances are Shari Costanzo can tell you.

That’s because she’s not only been there, she’s run there.

Costanzo recently finished a personal goal of hers: to run every street in Napa.

“It’s fun,” said Costanzo in an August interview. “I like to take on challenges; things I know that are going to be hard to do.”

On Dec. 27, Costanzo finished her quest, saving First, Second and Third streets in downtown Napa for her last runs.

Joining her were her running friends from The Napa Running Company, Vintage High School cross country team members, family and other supporters. Mayor Jill Techel even ran a part of the last section of streets with Costanzo.

“We all met her and ran together down to city hall. It was a blast,” said Costanzo.

“It was exciting to finally finish but also I was thinking, ‘What do I do next?’” said Costanzo. “How do I top this goal?”

Costanzo said her favorite Napa city neighborhood to run was probably Alta Heights, because of “gorgeous views (and) lots hills to climb.”

“I love that and the challenge of all the hills,” said Costanzo.

There were some surprises along the way.

First, it took her longer to run every single street than she first anticipated. Some Napa streets are twisty, and she had to run in and out of many of them, adding to the mileage.

In fact, there were several runs where Costanzo thought she’d cover about eight miles, but ended up running double that.

“There were so many more little streets,” she said. “I just kept running until I finished the neighborhood.”

Costanzo said she initially thought Browns Valley would be the hilliest terrain, but it turned out “I got more altitude in Alta Heights. It surprised me,” she said.

She came across a few personally notable street names along the way – like Shar Street by Phillips School and George Alley downtown. Her grandfather’s name is George, said Costanzo.

Friends joined her for many of the miles. During runs, she’d also hand out rubber “Alainasvoice.org“ bracelets in honor of the Alaina Housley family of Napa. Costanzo is friends with the Housley’s, whose daughter died in 2018.

Along the way, one friend of Costanzo’s, Laura Orozco, also decided to run every street in Napa.

“It was exciting to inspire her,” said Costanzo.

This Napan, who teaches a combination kindergarten-first grade class at Vichy Elementary school, said her street running project was a big commitment, but anyone can cover the same distance.

“Run, walk, ride a bike,” she said. “Do one neighborhood at a time and just start exploring.”

“It’s a great way to see your whole city,” and get out and move.

Costanzo said that between all the streets she ran in Napa and other runs, she ran more than 2,200 miles in 2019. There are more than 200 miles of streets in Napa.

She said she also completed two marathons, including finishing the Chicago Marathon in a personal record of 3 hours, 10 minutes and 39 seconds.

The runner also said she earned personal records in the half marathon, 10K and 5K distances.

What’s next for Costanzo?

Maybe she’ll run all the streets in Yountville or elsewhere in Napa Valley, she said.

But Costanzo also wants to run marathons in Tokyo, Berlin and London.

“I have (those) three on my bucket list,” she said.

One woman's challenge: Run every street in Napa

A Napa elementary school teacher is well on her way to running every street in the city.

Have a Great Hair Day

Have A Great Hair Day