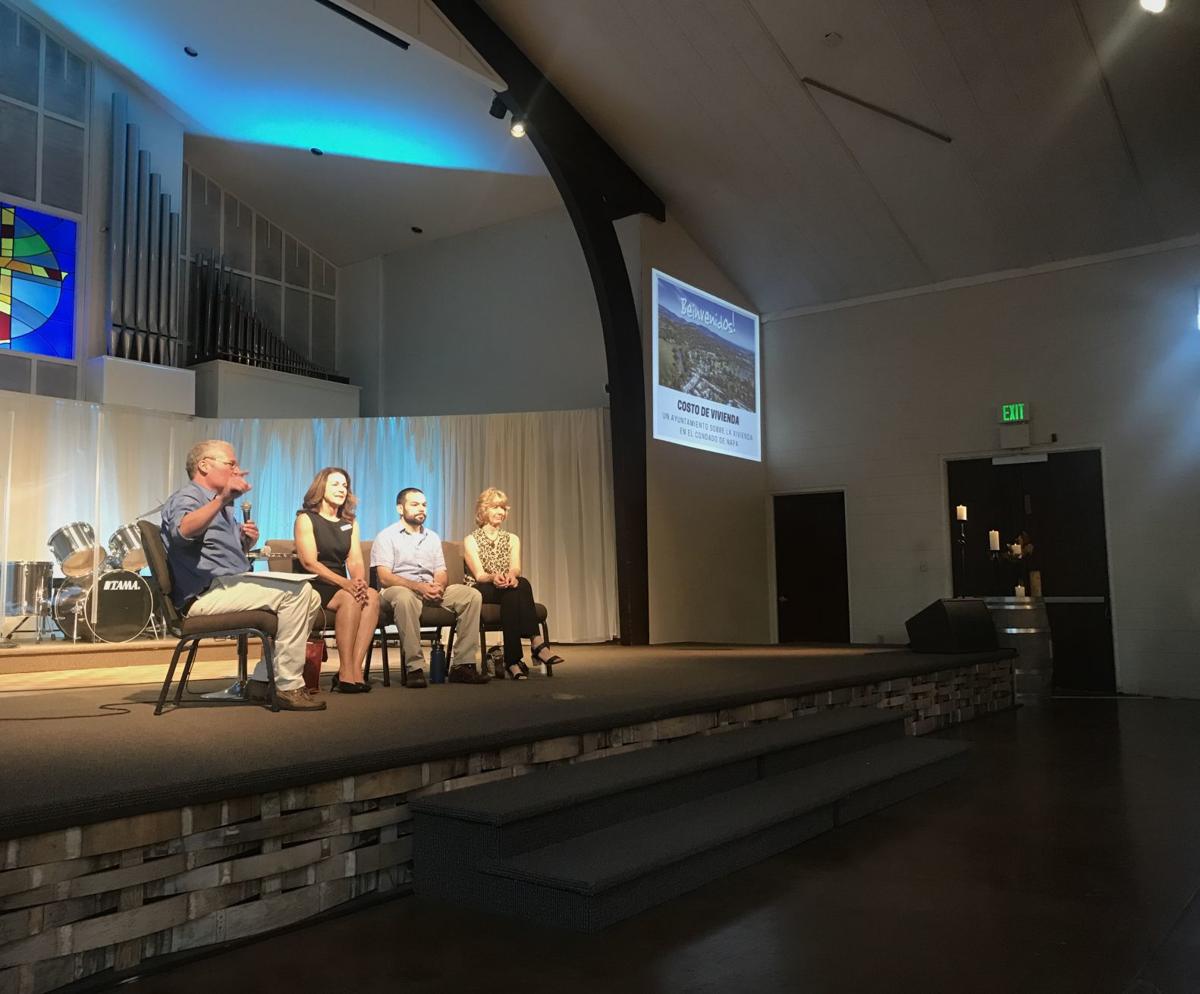 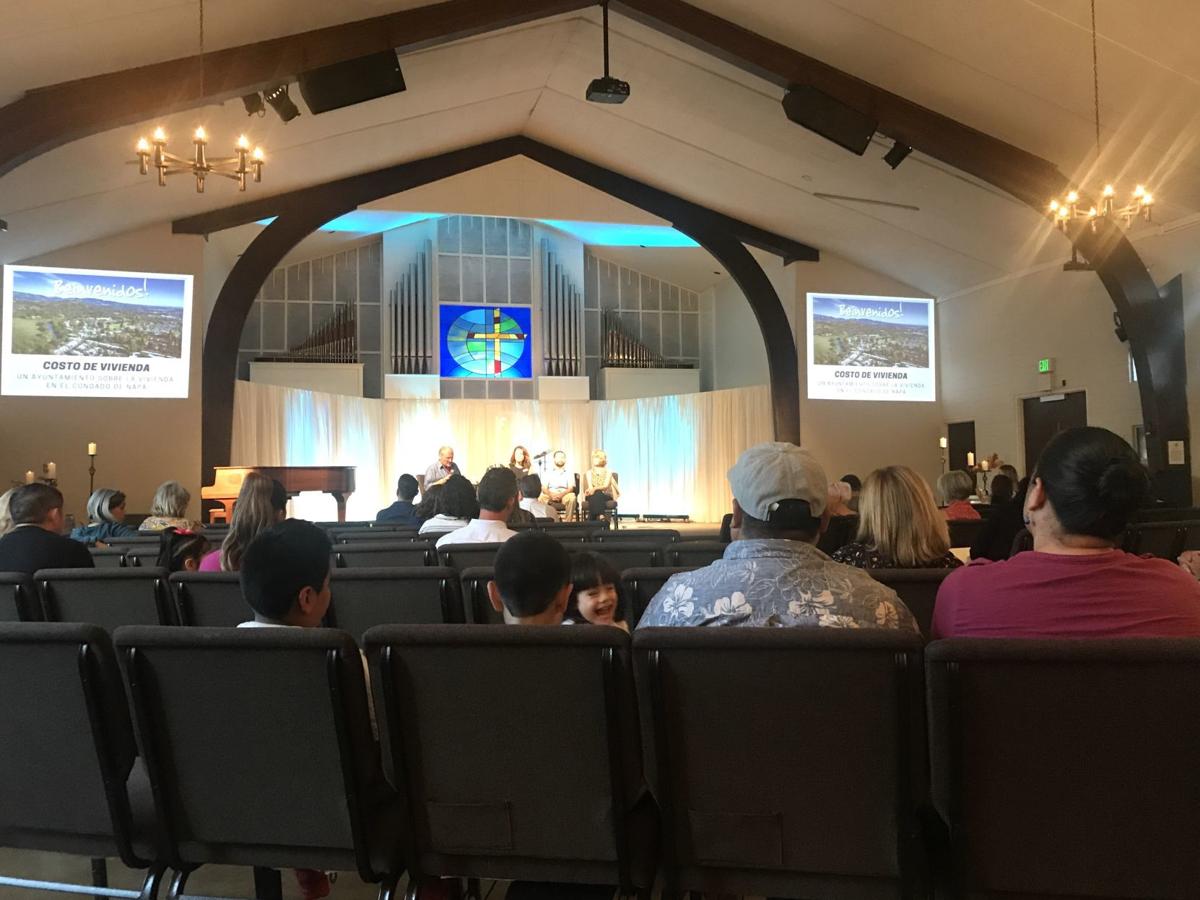 Sandra Sanchez and Jesus Casas sit with their two children and nephew at the housing town hall Wednesday night. Casas said they came in support of their apartment complex, River Park Manor, and to learn more about the situation in Napa.

Sandra Sanchez and Jesus Casas sit with their two children and nephew at the housing town hall Wednesday night. Casas said they came in support of their apartment complex, River Park Manor, and to learn more about the situation in Napa.

It’s safe to say that attendees of the Napa Valley Register’s “costs of living” town hall on Wednesday night had housing on the brain.

They’re not the only ones. As housing costs have shot up and rental vacancy rates have dropped below one percent in the North Bay, it’s an issue increasingly on the minds of community members in Napa.

The region’s housing crisis impacts even secure homeowners, Scully said. Maybe they’re not at risk of displacement, but what if a neighborhood restaurant must close its doors due to a labor shortage caused by lack of housing?

Sandra Sanchez and Jesus Casas came with their two children and a nephew in support of River Park Manor apartments, where they live. The complex, due to be remodeled this fall, has been set aside for residents making less than 60 percent of Napa’s median income (which translates to about $55,000 for a family of four). The family was interested in learning more about plans for housing in the area, Casas said, noting it had not been easy to find a place to live in Napa.

Carol Barge, a homeowner and Napa resident since 2015, hoped to gain an understanding of the city’s plans for building additional housing.

“I’d like to see a mix of seniors, families, different socioeconomic backgrounds – all living together,” Barge said, adding she hoped that affordable housing would be mixed in with high end developments in Napa. “Can we, going forward, have housing that meets different needs in the same location?”

Panelists described efforts to problem solve. Walker, the housing consultant, credited the Napa Housing Coalition, which she said had brokered conversation with a developer who had ultimately agreed to try a “local preference” policy. Units were offered first to community members, Walker said, shielding them from competing with buyers looking for a second or third home, or investors hoping to rent out property here.

“These were (for) folks living or working in the community who had been impacted by the fires, or were disabled,” Walker said, adding that 95 percent of those who applied met those qualifications. “We took in 500 applications – we’re at 130 (approved) and we’re almost filled. That means 370 people in the community are still looking.”

Alessio said local government was highly attuned to the issue, aware of the lack of units and that average rental rates have risen substantially. She acknowledged the need for a family shelter in Napa (“We have a small one, but historically family shelters have always had a waiting list,” Alessio added.) and said the city was currently addressing 350 cases against illegal Airbnbs.

Napa needs about 3,000 additional homes to meet demand in the area, but has just under 1,000 new units in the pipeline and is incentivizing homeowners to build accessory dwelling units (sometimes known as granny units). It’s a hopeful start, Alessio said.

Zatarain, with Fair Housing Napa Valley, said that his organization would continue its advocacy for tenant rights and address resident concerns.

Alessio said there was a 10-year mortality gap between different neighborhoods within Napa itself. She referenced a neighborhood in close proximity to where the townhall was held at CrossWalk community church in west Napa. Even within Napa itself, ZIP code is indicative of future opportunity, potentially impacting the physical and mental health of residents, Zatarain said.

He described his first case in the area – a couple who had called to complain about the condition of their “unit,” which Zatarain said was ultimately a small storage shed behind a mobile home. They’d been barred entry from the mobile home, Zatarain added, left without adequate kitchen or bathroom facilities. They’d been paying $500 a month.

“That was my introduction to housing in Napa Valley,” he said.

Leoda Brisbon, who grew up in Napa and has lived here for 60 years, submitted a question to the panel about Section 8 tenants. Brisbon herself receives Section 8 rent subsidies, she said, and has struggled to accommodate continuous rent spikes.

Fair Housing Napa Valley was helping her mediate the situation, and she’s aware there other community resources. Hearing what politicans are “doing and thinking” about the housing crisis was also of interest to her, Brisbon said.

“I just have a lot of passion about growing up here – a lot of us have grown up here, and we see the changes, and we acknowledge them, but it breaks my heart to think that we can’t even afford to live here anymore,” Brisbon said. She choked up. “And this is our home.”