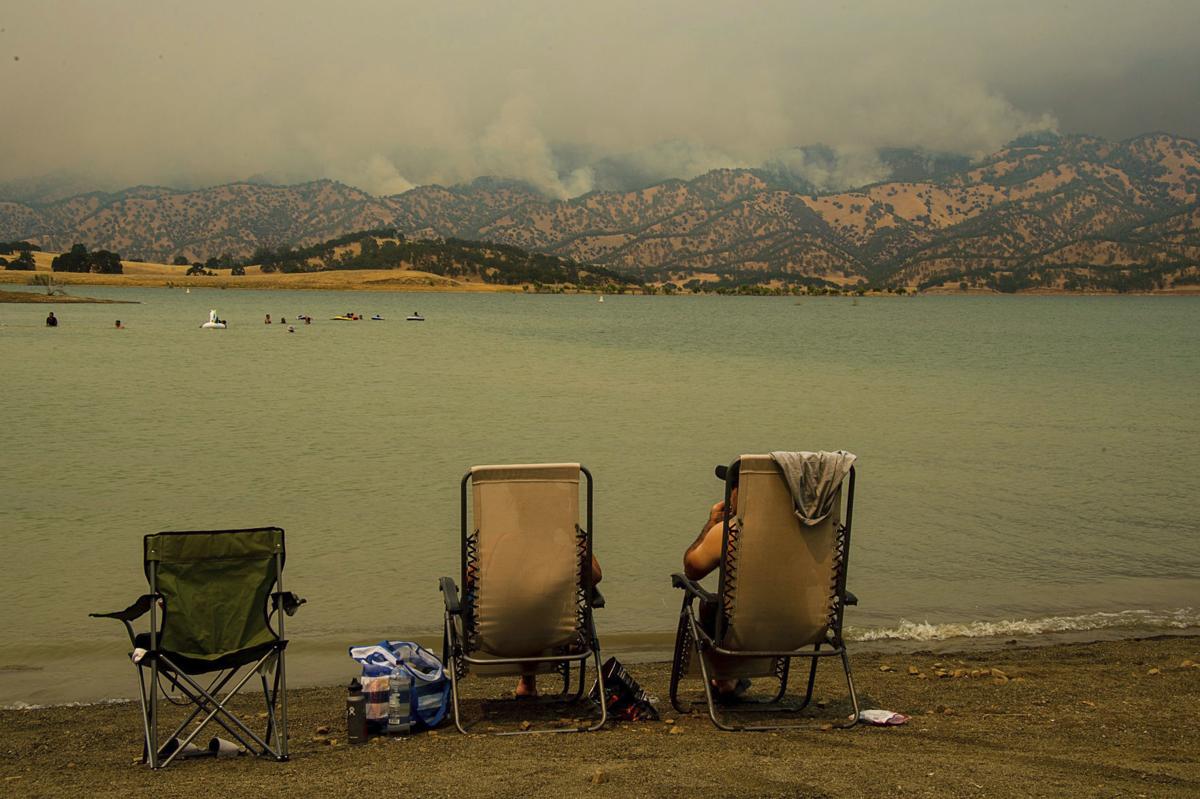 This was the view Sunday from the recreations shores of Lake Berryessa, looking east toward Yolo County and the rampaging County Fire. Smoke and ash from the fire contributed to poor air quality in Napa and other Bay Area counties. 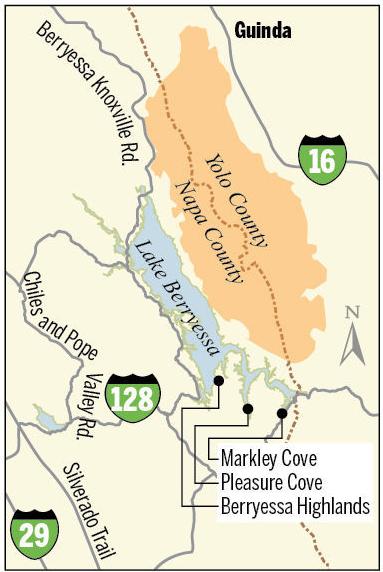 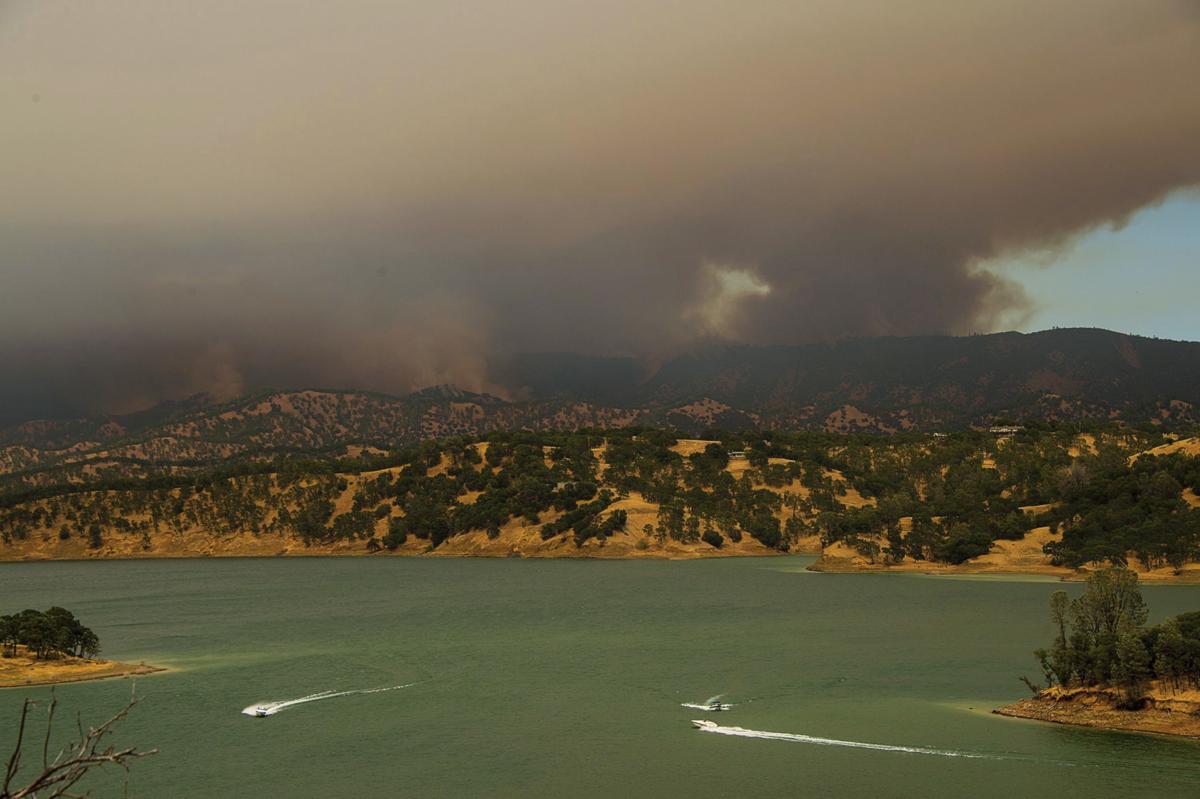 A wildfire burns near Lake Berryessa in Napa County, Sunday. 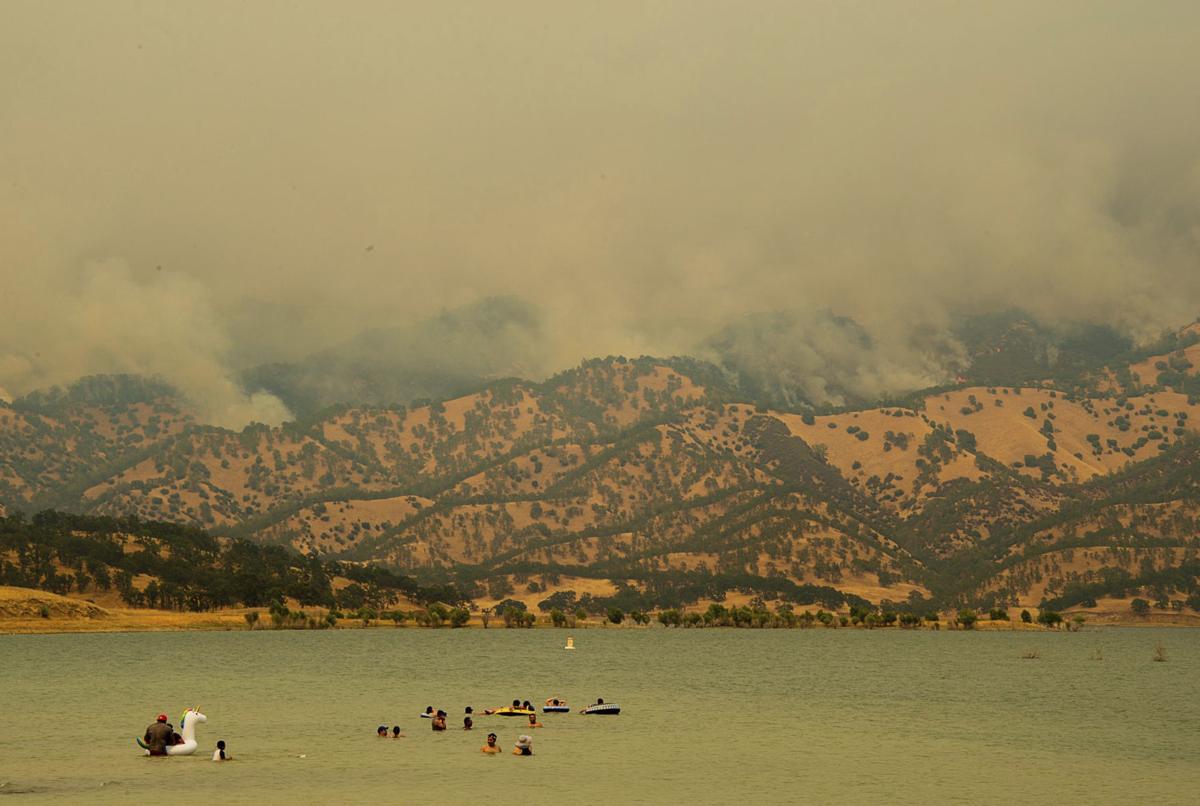 A wildfire burns near Lake Berryessa in Napa County, Sunday. Smoke from the Yolo County fire was contributing to poor air quality in Napa, Sonoma, San Mateo and San Francisco counties, according to the National Weather Service.

Lake Berryessa is near enough to the County Fire to rattle the nerves of residents, prompt evacuation preparedness warnings and leave resort operators wondering how many visitors will come for the Fourth of July holiday.

The Blue Ridge mountains on the remote east side of the lake are going up in smoke. The 70,000-acre fire as of Tuesday had burned amid an area more than three times as large as the massive federal reservoir, though it was a few miles away from the mainstream of Berryessa life.

People as of Tuesday could go to the federal reservoir for boating, fishing, swimming and other water sports. Still, the fire cast a shadow over what would usually be a festive week.

“For people who are planning to visit Lake Berryessa, they really need to plan ahead and be aware of road closures,” said Margaret Bailey, a park manager for the U.S. Bureau of Reclamation. “They also need to check the latest fire updates.”

Rattigan said the advisory won’t be lifted until the fire break line is secured. That probably won’t happen until after Wednesday.

Stu Williams lives in Berryessa Highlands. About three miles of lake separates the community of 300 homes from the fire, but winds Monday evening threatened to blow hot embers in that direction, he said.

“Everybody is on edge,” he said, though he noted weather conditions looked favorable on Tuesday morning and were predicted to remain that way for several days.

Williams said at least a couple of dozen fire trucks were in the area Monday night. A Napa County Sheriff’s Office official called him at 1:30 a.m. Tuesday to update him on the fire situation. People were to evacuate if they heard a siren.

“The whole Blue Ridge is nothing but smoke,” he said. “Last night I went to bed about midnight and you could see it, it looked like a Christmas tree lit up with lights around it. All of those lights were actually fires that were burning on the Blue Ridge mountains.”

He praised county officials for monitoring the situation closely and keeping residents informed.

Only last October, Berryessa Highlands was threatened by the Atlas Fire and had to evacuate. The County Fire is sparking unwanted memories.

“It’s been a very scary situation, déjà vu all over again,” Williams said.

County Supervisor Alfredo Pedroza went to Berryessa Highlands on Sunday and Monday nights. He praised the community for being proactive. Residents were on their decks monitoring the situation, getting hoses out and communicating on the Nextdoor social media network.

“We’re working with them to assure we’re providing them with the most update information we have, as well,” Pedroza said, adding that included having Sheriff’s personnel go door-to-door.

Markley Cove resort has a marina, cabins, a store and boat rentals. Chad Frazier of the resort said business has been pretty slow for the past couple of days.

“We’re open and ready to go,” he said. “Obviously, we’re being somewhat affected by smoke, but that’s about it. The fire is across the lake from us a couple of miles away. For us, it hasn’t had any effect.”

People coming on the Fourth of July might have the lake to themselves on a day when it’s usually packed, he said.

“We’d be glad to see them,” Frazier said. “If someone’s adventurous, this would be a great time to come.”

Spanish Flat resort is on the west side of Lake Berryessa and had no evacuation advisory as of Tuesday. Operator Craig Morton said visitors were still coming, though the resort had a few cancellations.

“The fire is on the east side of the lake and shouldn’t bother us … a little soot and a little smoke,” Morton said. “We’re open.”

He said the resort should be full next weekend. He doesn’t expect it to be full on the Fourth of July because the holiday falls in the middle of the week.

“The biggest thing is, they can still come up and enjoy the lake,” Morton said. “If you’re bringing fireworks, stay home.”

The Bureau of Reclamation runs day use areas and the Capell Cove boat launch. All remained open as of Tuesday.

“That could change for whatever reason,” Bailey said. “It’s not likely we would see active fire on the west side of the lake, but that’s not to say it couldn’t happen if it came around the north or the south of the lake.”

She advised people driving on lake roads to be looking out for firefighting vehicle traffic.

“Right now we have really gusty winds and the smoke is such I can’t see across the lake,” Bailey said on Tuesday afternoon. “We’ve got smoke in our airshed. Our air quality is not the best at the moment.”

Visit Napa Valley released a statement on Tuesday in an effort to let people know that Napa Valley hotels, wineries, restaurants and attractions remain open. So do the primary roads leading to the valley.

While some smoke may be visible, no air quality advisories have been issued at this time, the statement said. Napa Valley is located more than 12 miles west of the western edge of the fire.

When Marian Flanders and her husband saw thick plumes of smoke from their kitchen window in Yolo County, they divvied up a list of tasks they …

The County Fire burning in Yolo and Napa counties near Lake Berryessa has grown to 70,000 acres and is only 5 percent contained as of Tuesday …

GUINDA — The massive wildfire in Yolo, Lake and remote Napa counties has exploded in size, while dumping a plume of smoke and ash over the Nap…

The County Fire, which started in Yolo County and has burned into Napa County, sending smoke across the Bay Area over the weekend and into Mon…

Smoke coming from a fire in Yolo County northeast of Lake Berryessa was visible in Napa County on Saturday afternoon, according to a Nixle ale…

A wildlife area in Napa County was closed Tuesday until further notice because of a wildfire, officials with Cal Fire and the California Depar…

The County Fire, which erupted Saturday afternoon in Yolo County, has nearly tripled in size over the past several days, so far scorching 88,0…

While it certainly affected those trying to capture photographs of Napa Valley vistas, the smoke and haze from summer wildfires located outsid…

Almost one year after the October 2017 wildfires, the Napa Valley continues to make economic strides in recovering from the natural disaster, …

This was the view Sunday from the recreations shores of Lake Berryessa, looking east toward Yolo County and the rampaging County Fire. Smoke and ash from the fire contributed to poor air quality in Napa and other Bay Area counties.

A wildfire burns near Lake Berryessa in Napa County, Sunday.

A wildfire burns near Lake Berryessa in Napa County, Sunday. Smoke from the Yolo County fire was contributing to poor air quality in Napa, Sonoma, San Mateo and San Francisco counties, according to the National Weather Service.