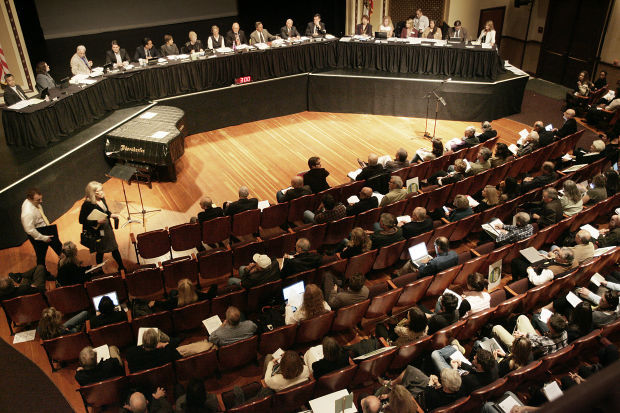 The Napa County Board of Supervisors and the Napa County Planning Commission held a joint meeting in the District Auditorium Tuesday to discuss the impacts of wine industry growth. 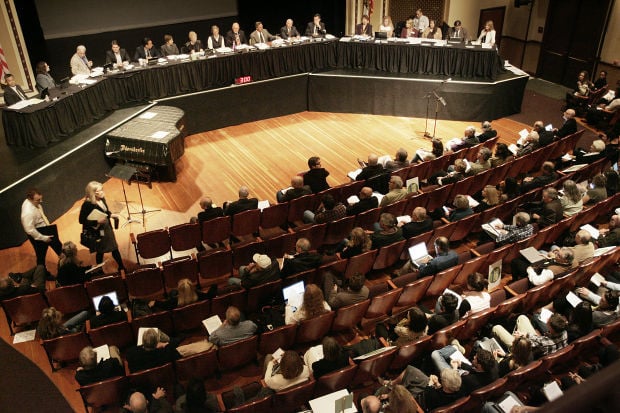 The Napa County Board of Supervisors and the Napa County Planning Commission held a joint meeting before a big crowd in the District Auditorium in March to discuss the impacts of wine industry growth. This issue remained unresolved at year’s end.

Napa County’s growth summit ended after six hours of discussion and county leaders agreeing to launch a larger community conversation that could last for months.

The Board of Supervisors wants to create a forum with the cities to discuss regional land use issues, form a committee to review the Winery Definition Ordinance and investigate creating a traffic mitigation development fee. It also wants the county to complete a stalled climate action plan.

But it declined to impose a moratorium on new wineries, as some residents desired.

“I don’t think we’ve had a meeting quite like this,” Board of Supervisors Chairwoman Diane Dillon said as she looked at an audience of more than 400 people.

The Board of Supervisors and Planning Commission met in the Napa Unified School District auditorium to address concerns that residents have voiced with increasing frequency over the past year. These concerns include the perception that too many wineries are becoming glitzy event centers that overshadow agriculture, generate too much traffic and use too much groundwater.

But others say Napa County is in no danger of being paved over. Wine industry officials talk about a business model that increasingly relies on attracting people to wineries, building loyalties with them and making direct-to-consumer sales.

Supervisor Mark Luce said the justification for allowing new wineries in the agricultural resource area on the Napa Valley floor is thinner than in the past. That’s because the production imbalance that 25 years ago saw many of the grapes being shipped out of the area to be turned into wine has been addressed by having more wineries.

“How do we protect this ag resource area and keep it the beautiful area it is while still allowing the appropriate amount of commerce to occur?” Luce asked.

He said new wineries being proposed in the hills or the Carneros area, as opposed to on the valley floor, are a separate issue.

Supervisor Keith Caldwell didn’t see a problem with how many wineries Napa County has allowed so far. But, like Luce, he said perhaps it’s time to address how many more wineries Napa Valley should have.

The planned Winery Definition Ordinance committee is to have representatives from various segments of the community, such as the cities, wine and agricultural groups, neighborhood groups and environmental groups. County planning staff will return to the county Board of Supervisors possibly on March 17 with details to establish the committee. The goal is to come up with possible new policies by August.

Napa County passed its Winery Definition Ordinance in 1990, which sets the rules on what type of wineries are allowed in agricultural areas and covers such topics as visitation, events and production.

“As a Napa Valley resident, it used to be Highway 29 that was impacted,” she said. “Now it’s Highway 29 and Silverado Trail.”

During public comments, Yountville Mayor John Dunbar addressed the idea of having the county and cities address regional issues. Wineries located in the rural county near Yountville affect the town, he said.

“I think it’s critical we have communication going forward,” Dunbar said. “This is an opportunity to do so.”

Supervisors and commissioners started the hearing listening to data.

For example, Napa County has 4.9 million visitor trips annually, with one person staying for two days counting as two trips. The estimated number of individual visitors is 2.9 million annually, according to Visit Napa Valley.

“The Giants pull in more people than the Napa Valley does,” he said.

Planning staff said that the county has 467 brick-and-mortar wineries, though there are other ways to define wineries that produce different numbers. Sixty-eight percent are what the county defined as small wineries producing 50,000 gallons a year or less.

Planning officials also took a stab at figuring out how many more wineries could possibly be built in Napa County. They looked at existing county rules restricting wineries to parcels of at least 10 acres and calculated there are 4,523 potential sites. About 1,700 of these parcels are planted in vineyards.

“Does every 10-acre parcel need to have a winery?” Caldwell asked. “I think that’s a discussion we could have.”

Napa County has 41 pending requests for new wineries or changes of existing wineries. It has 20 requests for new vineyards totaling 608 acres, most for the hills east of the Napa Valley. The Walt Ranch application for the eastern hills is for about 300 acres of vineyards.

Morrison sees factors that will continue to affect such issues as traffic beyond winery growth. He noted the county has 138,000 residents, double the number from 40 years ago. The county estimates the population will grow by 30,000 people over the coming 40 years, which translates to adding another American Canyon and more.

“Where do we put another 30,000 people in Napa County?” Morrison said. “Those are the type of questions I think need a lot of focus.”

County staff found that the county has enough homes for its workers. But the prices of the homes are too high for many workers.

Winery growth proved to be a hot topic in Napa on Tuesday with people lining up by the dozens to have their say.

The Napa County Board of Supervisors and the Napa County Planning Commission held a joint meeting in the District Auditorium Tuesday to discuss the impacts of wine industry growth.

The Napa County Board of Supervisors and the Napa County Planning Commission held a joint meeting before a big crowd in the District Auditorium in March to discuss the impacts of wine industry growth. This issue remained unresolved at year’s end.