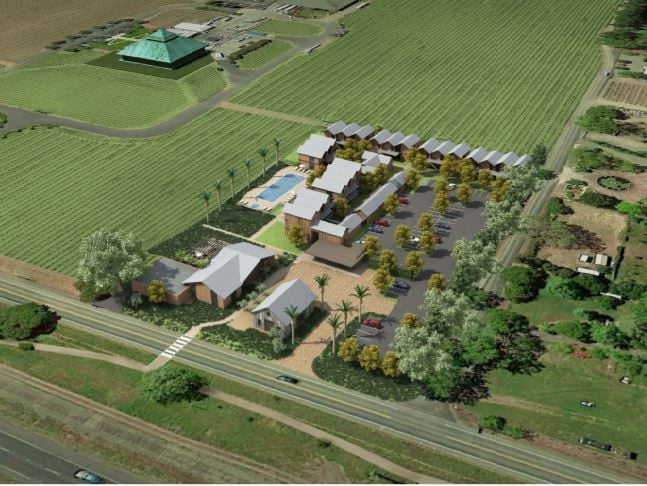 The proposed Oak Knoll hotel, depicted here in a rendering, would be located on Solano Avenue in the rural Napa Valley near the vineyards of the agricultural preserve. 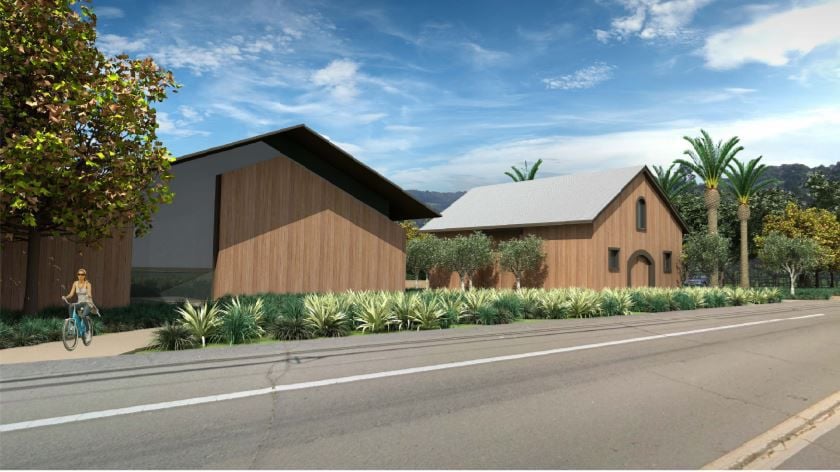 Napa County in coming months will study the proposed Oak Knoll hotel to be located on Solano Avenue north of the city of Napa on rural property that once housed the Red Hen restaurant and antique store. This artist’s rendering shows the front buildings.

A proposed Oak Knoll resort would be that rare hotel built outside a city on rural land next to Napa Valley vineyards – if it passes muster with Napa County.

County planning officials held the first public meeting this week on the proposed project targeted for the former Red Hen site north of Napa. They listened to people’s suggestions on topics that should be covered by an upcoming environmental impact report.

Rural neighbors voiced concerns, mostly about the scale of the project and how it would fit in with the area.

“This is a small parcel in a sea of agricultural preserve,” Jill Levy said.

Oak Knoll hotel would be located at 5091 Solano Avenue. The 3.5-acre parcel is a rare property zoned for lodgings, restaurants and other commercial uses in the unincorporated Napa Valley, with commercial uses there predating the county’s first zoning code in 1955.

Several buildings on the parcel are boarded up and are behind a chain-link fence. One housed the Red Hen restaurant until it moved into Napa in 2003, followed by the Zare restaurant that closed in 2007. Another housed an antique store.

Oak Knoll Resort, LLC wants to sweep the land clean. Then it would build a 50-room hotel and spa, a restaurant with 70 indoor seats and 30 patio seats and retail space.

“Every room will have a vineyard view,” Greg Pitts of Oak Knoll Resort said in 2015. “We want to remind every guest who comes and stays with us that the Napa Valley that exists today is really because of the ag preserve.”

Morgan Morgan lives on nearby West Oak Knoll Avenue, where there is a pocket of rural homes. She said the prospect of having a small motel on the site has morphed into an events center.

“Every noise carries through the neighborhood,” she said. “This is a rural neighborhood. It’s very quiet at night.”

James Rose, an attorney representing a neighbor, said the environmental impact report needs to look at such things as light pollution. He, too, wants a smaller development.

“It’s too big,” he said. “It’s too intense. You put too much water in the bucket and what happens? The water spills.”

Several people voiced concern that the spillage will be people parking on West Oak Knoll Avenue. The project is asking to have 109 parking spaces, even though the county requires 122 spaces for a project of this size.

Owners in a 2016 application said employees will have staggered schedules and some could commute by bus and carpool and by bike on the nearby Napa Valley Vine Trail. But skeptics doubt enough people heading to the resort would use non-auto transportation to make a difference.

“The bike trail is recreational,” said Eve Kahn of Get a Grip on Growth. “I don’t see people riding their bikes hauling their luggage behind them.”

Pitts said Monday that the owners have been in contact with the neighbors for two years discussing the site plan and designs.

“We look forward to continuing the discussion of their concerns,” he said.

Cio Perez of the Napa County Farm Bureau brought up a different type of concern. He said the zoning for the property might be commercial, but the general plan designation is agricultural. He suggested the project might be subject to a vote of the people under Measure P.

In the draft environmental impact report, Napa County intends to explore such issues as noise, traffic, greenhouse gas emissions and aesthetics. It is still looking for suggested topics. People with ideas can contact planner Dana Ayers at Dana.Ayers@countyofnapa.org or 253-4388 by 5 p.m. July 17.

Napa County and its consultant, Ascent Environmental, intend to release a draft environmental impact report in the fall or winter. People will be able to submit comments on the document.

The county intends to release a final environmental impact report with answers to the comments in spring 2018. Then the Planning Commission will consider certifying the report and vote on the project.

Napa County will hold a meeting Monday on the proposed Oak Knoll hotel to be built between Napa and Yountville at the rural, former Red Hen site.

Napa County Planning Commissioners heard Wednesday that South Napa County industrial land is at a premium, even if it might not appear that wa…

Napa’s hotel industry continues to expand, and so does its importance to the city’s checkbook.

Napa Valley travelers in the early days of the route that eventually became Highway 29 faced a much different problem than traffic congestion,…

In the past decade, hotels have become visible anchors in Napa – the Napa River Inn by the water, the Andaz towering over downtown First Stree…

ST. HELENA — In the face of strong public opposition, the St. Helena City Council agreed that it’s too soon to team up with a developer to bui…

A 200-plus-page look at a proposed resort on the rural, former Red Hen site between Napa and Yountville finds no environmental hurdles that it…

Napa County responds to citizen concerns about a 50-room hotel and 100-seat restaurant on Solano Avenue.

I read with interest the article on the forward progress of a hotel development (“Report analyzes hotel problems,” Jan. 3) on the old Red Hen …

The proposed Oak Knoll hotel, depicted here in a rendering, would be located on Solano Avenue in the rural Napa Valley near the vineyards of the agricultural preserve.

Napa County in coming months will study the proposed Oak Knoll hotel to be located on Solano Avenue north of the city of Napa on rural property that once housed the Red Hen restaurant and antique store. This artist’s rendering shows the front buildings.