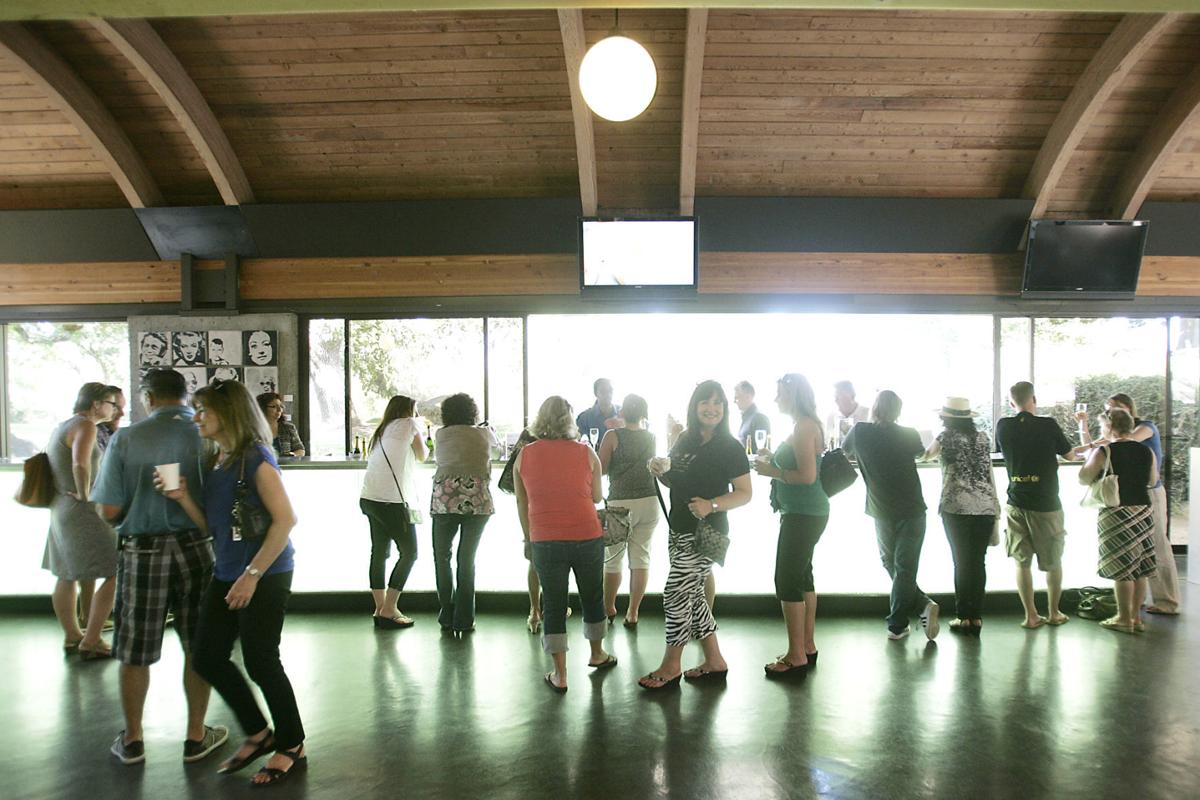 Guests sample some of the offerings in the tasting room, known as The Salon, at Domaine Chandon in 2018. All Napa Valley tasting rooms are currently closed due to shelter-at-home orders. 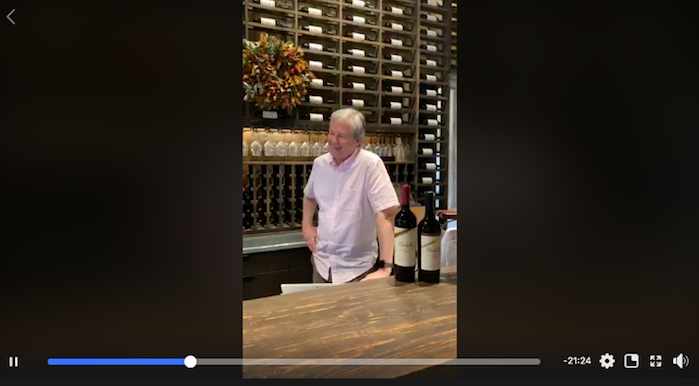 C. Mondavi & Family CEO Judd Wallenbrock, seen here in one of the winery's Facebook Live videos, said the onset of COVID-19 has expedited the winery's ventures into technology as a way to connect with consumers. The pandemic could fundamentally alter the way wineries do business as they're forced away from the tasting room model, experts say.

With tasting rooms closed, most of Napa Valley’s wineries have had to drastically alter the way they do business. Those changes could reshape the industry for good, experts say.

Tasting rooms account for 28% of sales at the average winery, according to Rob McMillan, who as the founder of Silicon Valley Bank works closely with members of the North Bay’s luxury wine industry.

Tasting rooms are also often the primary channel through which wineries acquire new wine club members, McMillan said, and wine clubs are responsible for an average of 23% of sales. That makes tasting rooms an absolutely critical channel for many of the industry’s players, generating more than half of winery sales.

McMillan has long encouraged wineries to pivot away from dependence on tasting rooms, a tendency he calls both the industry’s “greatest weakness” and its “greatest opportunity.” Now that paradox is being laid bare.

“Channels are shifting – wine’s not being sold in restaurants or at boutique wineries; it’s being sold in grocery stores,” McMillan said. “What happens next, inevitably, is that wineries out there have to figure out a couple things: how to evolve their premises to figure out how to sell a different way in a post-COVID era, and how to attract younger customers.”

Wineries nursing established relationships with distributors, who ultimately sell their wine to grocers and other retailers, might find themselves bolstered, in part, by the presence of their label on grocery store shelves. Data from BACtrack, a San Francisco-based producer of mobile smartphone breathalyzers, shows that Bay Area consumers, stuck in their homes, are drinking 42 percent more.

However, some experts have attributed the surge to the temporary, panic-driven pantry-stocking mentality that has ravaged consumers. That’s a boon for the grocery channel, according to McMillan, though not one that necessarily fills the tasting room void.

Charles Krug, Napa Valley’s oldest winery, does 90% of its wine sales by volume through distributors, according to C. Mondavi & Family CEO Judd Wallenbrock. While those channels have served as a buffer of sorts, Wallenbrock said, business has changed – there are legions of restaurants, for example, no longer moving the kind of inventory they once did.

As a result, the winery has been forced to lean on different sales strategies, according to Wallenbrock. Charles Krug has begun offering virtual wine tastings using Zoom and Facebook Live; it’s also been taking what Wallenbrock calls “a shotgun blast” of outreach to consumers through its social media channels.

“We’ve known that we need to use technology on different platforms to communicate with customers, but when you’re in the wine business (it’s slow going),” Wallenbrock said. “We had been moving in that direction toward going digital, but this has expedited us. Without a doubt, it’s moved things forward.”

Even so, industry members have had to get creative. Napa Valley Vintners is providing member wineries with additional opportunities to sell wine, including “open the cellar” sales and weekly virtual Open That Bottle events, each of which highlight different valley wine varieties.

Among members, there’s been a definite shift into the virtual space, which have proved quite popular in the last month or so, Reiff said. But there’s also been a pivot back into the “old fashioned” way of doing things, according to Reiff: attempting to reach consumers directly and engage on a personal level.

Clif Family Winery, which produces 8,000 cases per year, does anywhere between 30 to 40% of its business through its tasting room and its food truck, according to General Manager Linzi Gay. Tasting room traffic also feeds directly into the winery’s wine club membership, she said, echoing McMillan’s earlier point. About 75% of the winery’s business is direct-to-consumer; it doesn’t wholesale its wines, meaning none of its labels are available on grocery store shelves.

Grocery stores have put a freeze on accepting new products, according to Wallenbrock, but Gay says working with distributors is something that remains off Clif’s radar. The winery hasn’t been immediately disadvantaged by its direct-to-consumer focus, according to Gay: e-commerce sales of Clif Family wines and other specialty food products are “way up,” she said.

“I’ve thought about that a lot in the last couple weeks – ‘Would we be better off if we had stronger grocery presence right now?’” Gay said. “It’s too soon to tell. But the most important thing for anyone right now is to have diverse ways to sell to their customers, and we are diversified.”

Clif Family is also doing virtual tastings and digging deep into its Rolodex of consumers, according to Gay, stoking its existing connections. It’s offering curbside pick up for both wine and food from its food truck, and has cross-trained its tasting room team to help with shipping and sales calls, preventing layoffs.

“We’re all developing this new tool kit, and I think those tools won’t necessarily go away,” Gay said.

Some of those tools were already in the making, even before the shelter in place order, according to Reiff, who said NVV has been working for the last three years to help wineries increase direct-to-consumer sales “outside of visitation.” In the last year alone, the group has held a dozen educational webinars for members on the subject.

“It already was a topic of great importance, and now everyone is being forced to work within that space,” Reiff said. “I do believe that when we come out on the other side of this, there’ll be a continuation of this enhanced e-commerce effort.”

It’s not clear exactly what the other side of the pandemic-prompted lock downs looks like. Public health officials and experts, including Dr. Anthony Fauci, who is leading the United States’ fight against COVID-19, have said social distancing may remain in place long after stay-at-home orders have been lifted. That could certainly change how tasting rooms operate, even once they’re given the green light to open, McMillan said.

“If you’re used to having a tasting bar where you just cram people in next to each other, you’re going to have to change that behavior,” he said. “And then there’s a percentage of the over-60 group, part of the baby boomers, who may not feel comfortable in crowded spaces for a long time.”

That directly conflicts with the industry’s consumer trends. Boomers have long been the driving demographic behind wine sales, and what experts call “the millennial question” – how to get millennials to buy more wine – remains at the forefront of the minds of many in the industry.

It is possible, though, that wineries, once open for business, could see a rush of domestic tourism from Americans or Bay Area residents who don’t feel comfortable traveling far from their homes. Figuring out how to take advantage of the valley’s strengths once California emerges from lock-down will prove critical, McMillan added.

“It’s going to be hard, especially for many of these boutique (wineries) that are struggling,” McMillan said. “But the opportunity will be there, especially if we’re using the channels that have historically been underutilized like bringing the experience to the consumer and pushing people toward online sales.”

Photos: A look at Napa County under the coronavirus shelter-at-home mandate

Impact of coronavirus on Napa's workforce may be just beginning

The stunning numbers behind Bay Area's first month in lockdown

Here's a closer look at the stunning impact in numbers of the coronavirus on our life under lockdown.

Mendocino County authorities are blasting state prison officials, saying they released an inmate from prison despite knowing the inmate had been exposed to coronavirus.

Allen Balik, The Wine Exchange: Wines for summer and the 'new normal'

On Sunday afternoons, Allen Balik gather at the end of their cul de sac with wine glasses and, while maintaining strict social distancing, enjoy a bit of wine together while toasting the week past and the one ahead.

nakedwines.com wants to provide a lifeline to boutique labels.

The St. Helena Council is hoping for more public participation as it adapts to  Zoom teleconferencing.

Napa County's wine grape crop in 2019 saw a 13.5% decrease in volume and a 9.6% decrease in value as compared to 2018, according to the county's annual crop report, released Tuesday.

Napa County has given the county’s wineries the green light to reopen their tasting rooms to the public, a county spokesperson confirmed late Friday afternoon.

Guests sample some of the offerings in the tasting room, known as The Salon, at Domaine Chandon in 2018. All Napa Valley tasting rooms are currently closed due to shelter-at-home orders.

C. Mondavi & Family CEO Judd Wallenbrock, seen here in one of the winery's Facebook Live videos, said the onset of COVID-19 has expedited the winery's ventures into technology as a way to connect with consumers. The pandemic could fundamentally alter the way wineries do business as they're forced away from the tasting room model, experts say.