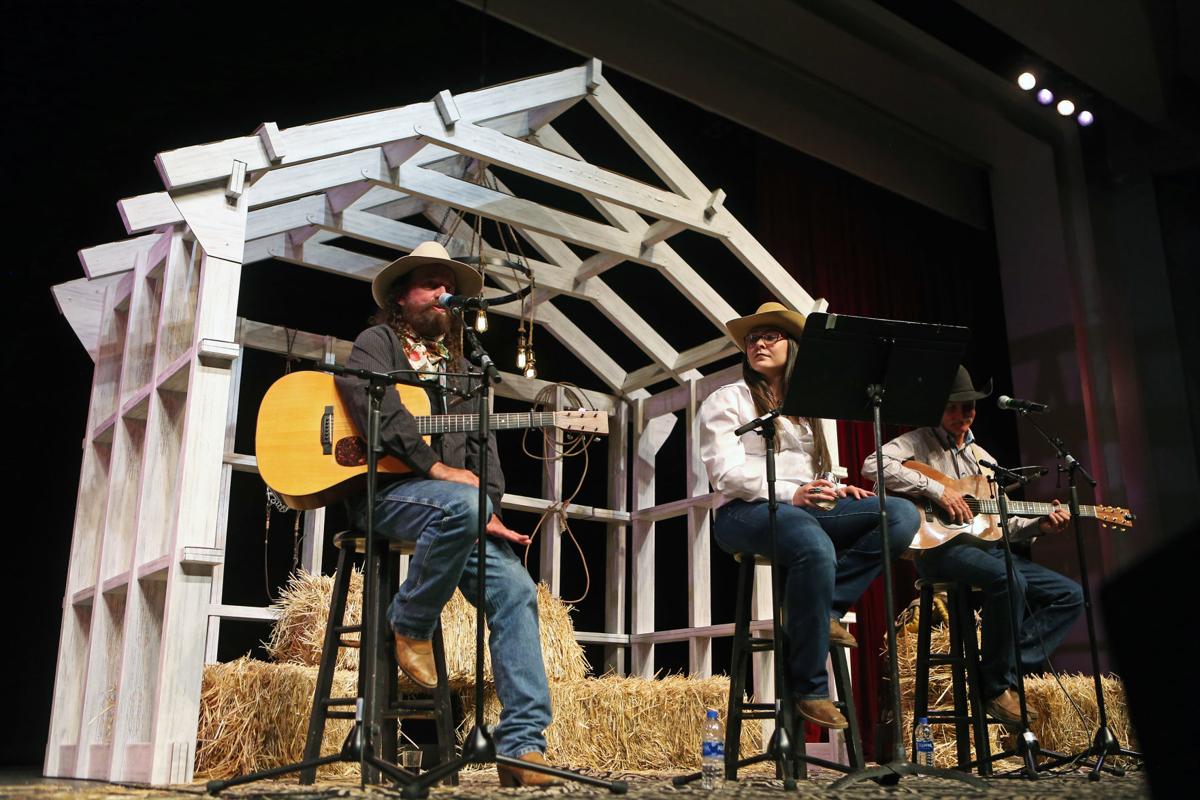 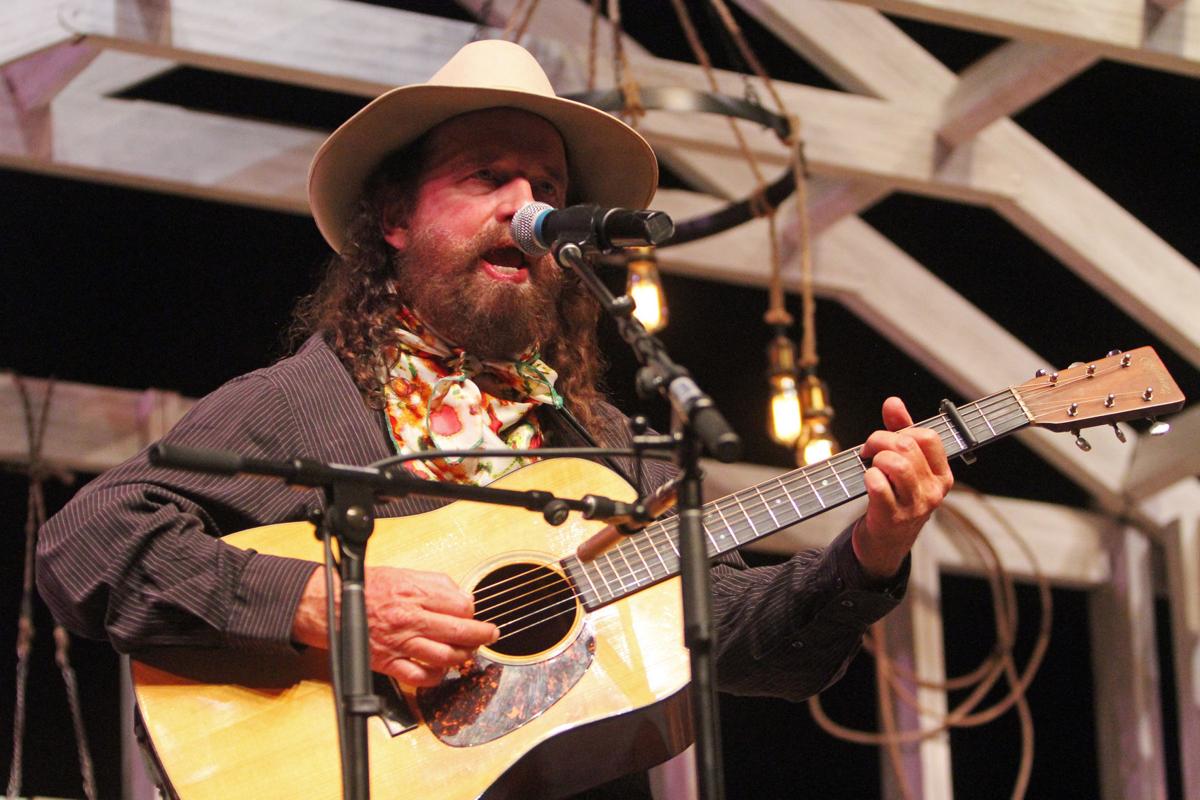 Mike Beck, a singer and guitarist, performed "Don't Hurt My Heart" and other compositions inspired by his years as a cowboy and horse trainer during Saturday's Cowboy Poetry and Music Gathering in Yountville. 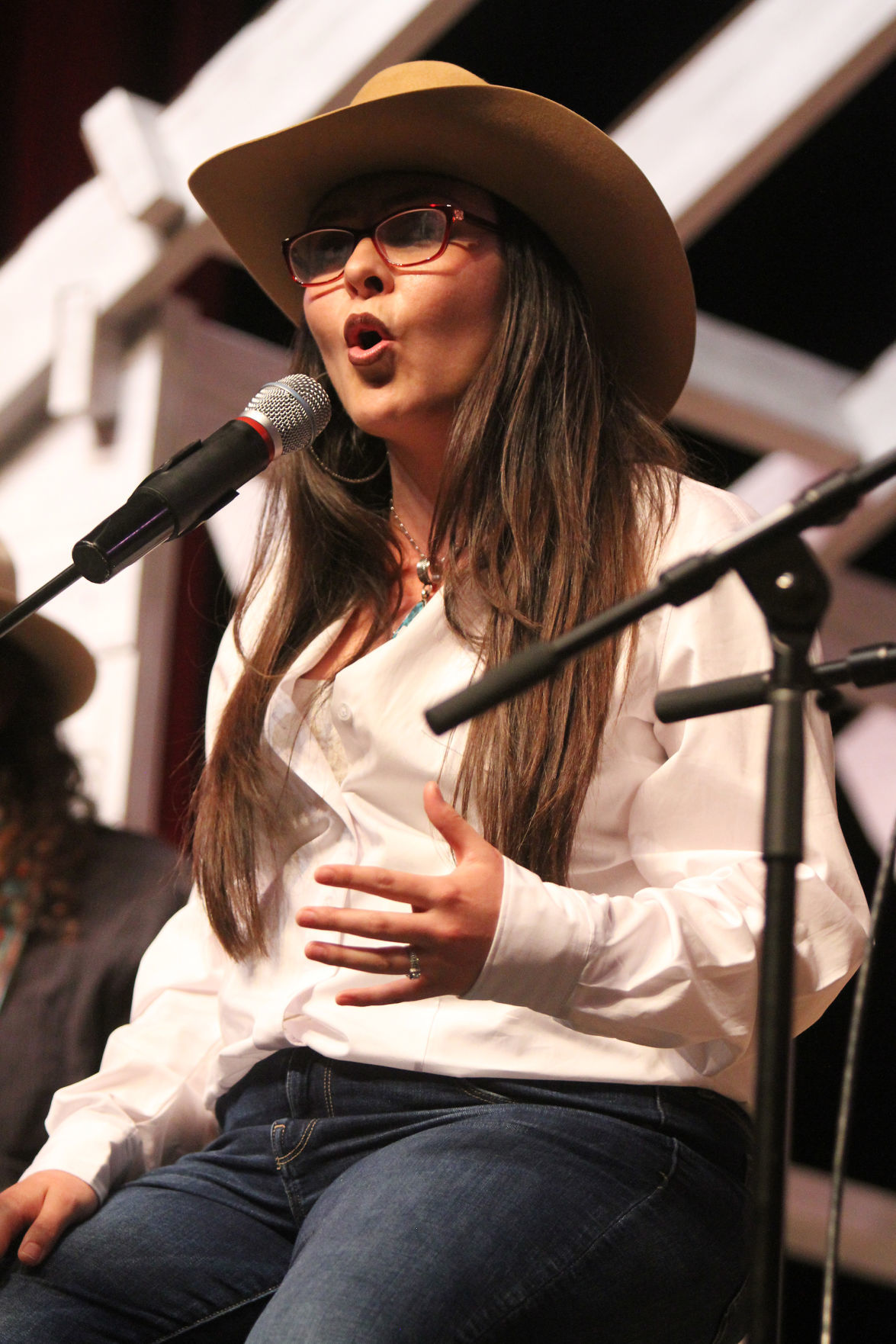 Olivia Romo, a poet who draws on her work on water-rights issues in her native New Mexico, recited several of her spoken-word works Saturday at the Cowboy Poetry and Music Gathering in Yountville. Romo was joined at the Lincoln Theater by singer-songwriters Mike Beck and Gail Steiger. 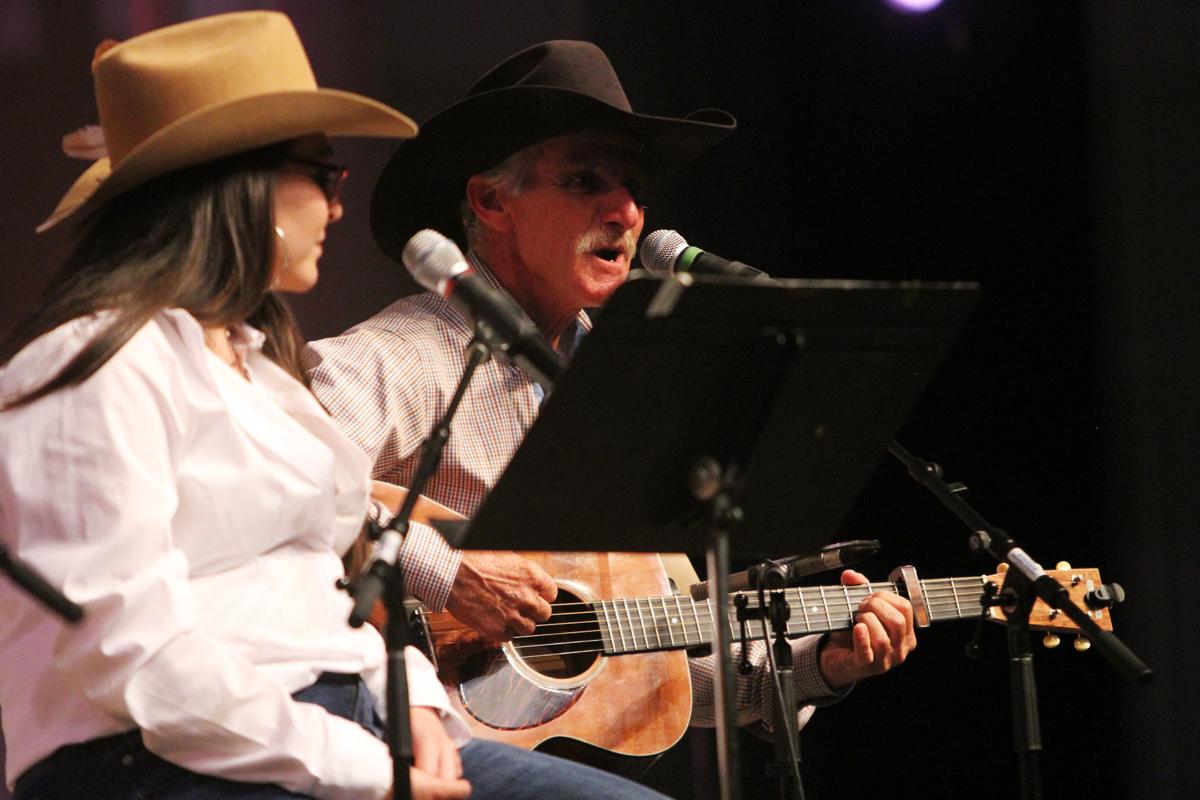 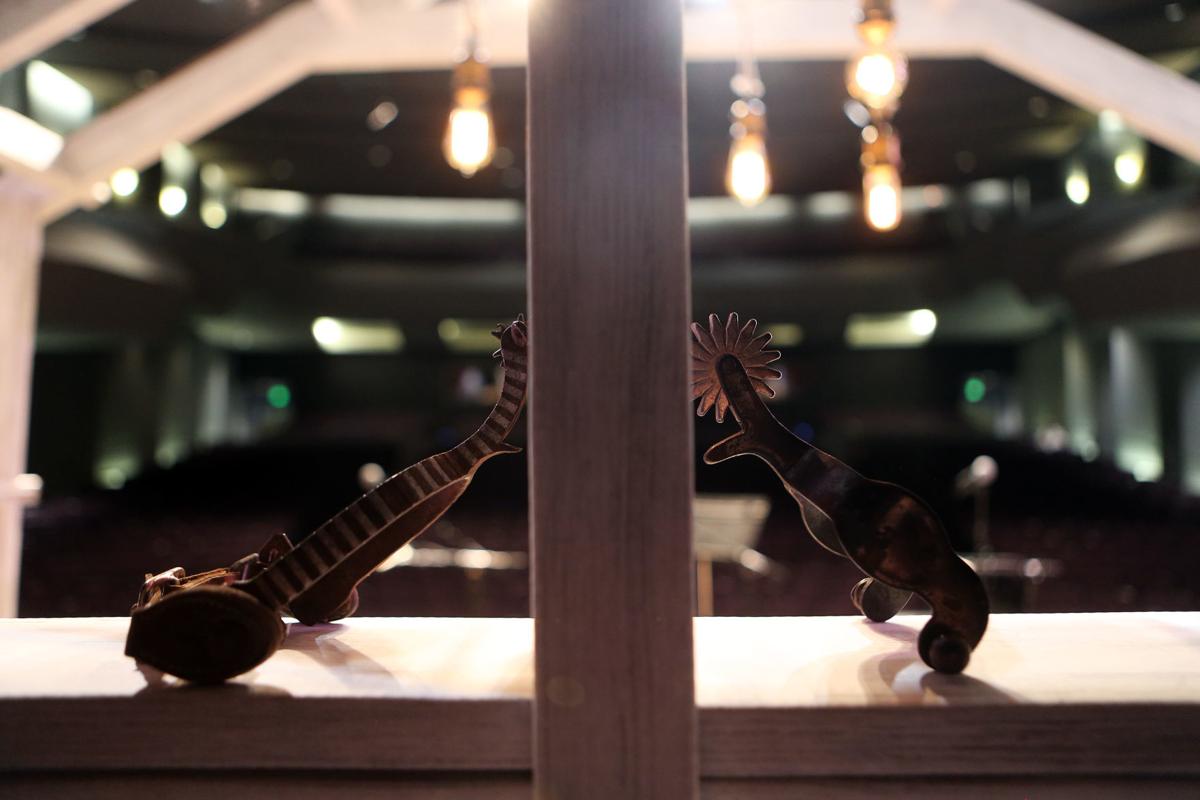 A set of spurs adorned the barn-like backdrop of the stage inside the Lincoln Theater in Yountville, which hosted its annual Cowboy Poetry and Music Gathering on Saturday night.

Mike Beck, a singer and guitarist, performed "Don't Hurt My Heart" and other compositions inspired by his years as a cowboy and horse trainer during Saturday's Cowboy Poetry and Music Gathering in Yountville.

Olivia Romo, a poet who draws on her work on water-rights issues in her native New Mexico, recited several of her spoken-word works Saturday at the Cowboy Poetry and Music Gathering in Yountville. Romo was joined at the Lincoln Theater by singer-songwriters Mike Beck and Gail Steiger.

A set of spurs adorned the barn-like backdrop of the stage inside the Lincoln Theater in Yountville, which hosted its annual Cowboy Poetry and Music Gathering on Saturday night.

YOUNTVILLE — The Napa Valley is not the usual backdrop for tunes and verses devoted to cowpunchers, coyotes and tribal lore. But on Sept. 7, the world of the grapevine and the world of the Old West met halfway.

In jeans and wide-brimmed hats, against a hay-bale backdrop on the Lincoln Theater stage, a trio of performers brought the wide-open spaces of their rural homes to life at Yountville’s fifth annual Cowboy Poetry and Music gathering. Using only a couple of acoustic guitars, a microphone and their vivid imaginations, singer-songwriters Gail Steiger and Mike Beck joined poet Olivia Romo in bringing to life stories of lonely windswept plains, muscular horses and cattle roundups — and a combination of loneliness and freedom that evoked by their work.

Reciting the lyrics of Michael Burton’s “Night Rider’s Lament,” the mustachioed Steiger — who has performed for more than three decades while operating the 50,000-acre Spider Ranch outside Prescott, Arizona — sang:

And she asked me, why does he ride for his money?

And tell me, why does he rope for short pay?

Boy, he must’ve gone crazy out there.

They’ve never seen a hawk on the wing.

Created in 2015, the annual Yountville concert is an offshoot of the National Cowboy Poetry Gathering in Elko, Nevada. There, Western-themed poets and singers have gathered to perform for 35 years – including Romo, Beck and Steiger, all of whom drew freely on their own experiences in lands even more distant culturally from modern-day urban America than they are in miles.

While shooting the documentary “Ranch Album” in 1987 about his experiences as a cow-puncher, Steiger recorded songs for the film and later performed them at Elko and another cowboy festival in Alpine, Texas, launching his career.

“My grandpa was a cowboy poet; he his friends liked to entertain each other,” he recalled before Saturday’s concert. “They’d come over and people would always have a story to tell, a song to sing.”

“For me, the coolest thing about the ranch is you’re outside all the time, and you realize what a gift the outside world is,” said Steiger, 63. The most important bank account is the minutes I get to spend out here. I try to share as much of that with people as I can.”

For Romo, 26, much of the foundation for her spoken-word art is found in her activism for the water rights of the small-farm owners and ranchers of her native northern New Mexico. The Taos resident works for the nonprofit New Mexico Acequia Association, which works to protect communal irrigation systems in the state.

“I didn’t have to go too far for inspiration – all the characters were in my backyard,” she said of the rural peoples whose lives find expression in her poems, in both English and Spanish.

Before a roughly one-third full Lincoln Theater, Romo’s work took a kaleidoscopic turn with “Roadrunner: The Chosen Prophet.” It deals with a Tewa warrior’s plea to lift a smallpox outbreak from his people and culminates in the appearance of vaqueros, a jackrabbit, grouse and ghost dancers in the span of a few paragraphs – and the titular bird’s message to surviving tribefolk to “sing, dance and plant together, for the great spirit has asked you to give birth to a stronger people.”

Born and raised in Monterey, Beck said he found himself drawn to cowboy song and folk culture from an early age, even affecting a youthful Oklahoma twang in emulation of the folk-music legend Woody Guthrie. Years as a cowboy in Nevada and Montana – and more recently as a horse trainer – have formed the base of a repertoire that has included seven albums and the selection of two of Beck’s songs for Western Horseman magazine’s list of “The 13 Best Cowboy Songs,” alongside works by Gene Autry, Lucinda Williams and others.

“It wasn’t so long ago that horses were completely a part of everyday life,” said Beck, 65. “I think the horse helped make America; I think it’s a topic that’s still close to the surface for people. When I play, I try to take people on a little trip (back in time).”

Beck’s musical time warp, in the form of the song “Don’t Hurt My Heart,” transported the audience to the centuries of equine service – from the Crusades to the settlement of the American West to the present day – and called on listeners to respect their animal companion as they would a friend.

So don’t sore my back,

Don’t you jerk my mouth;

If we come together, we can fly.