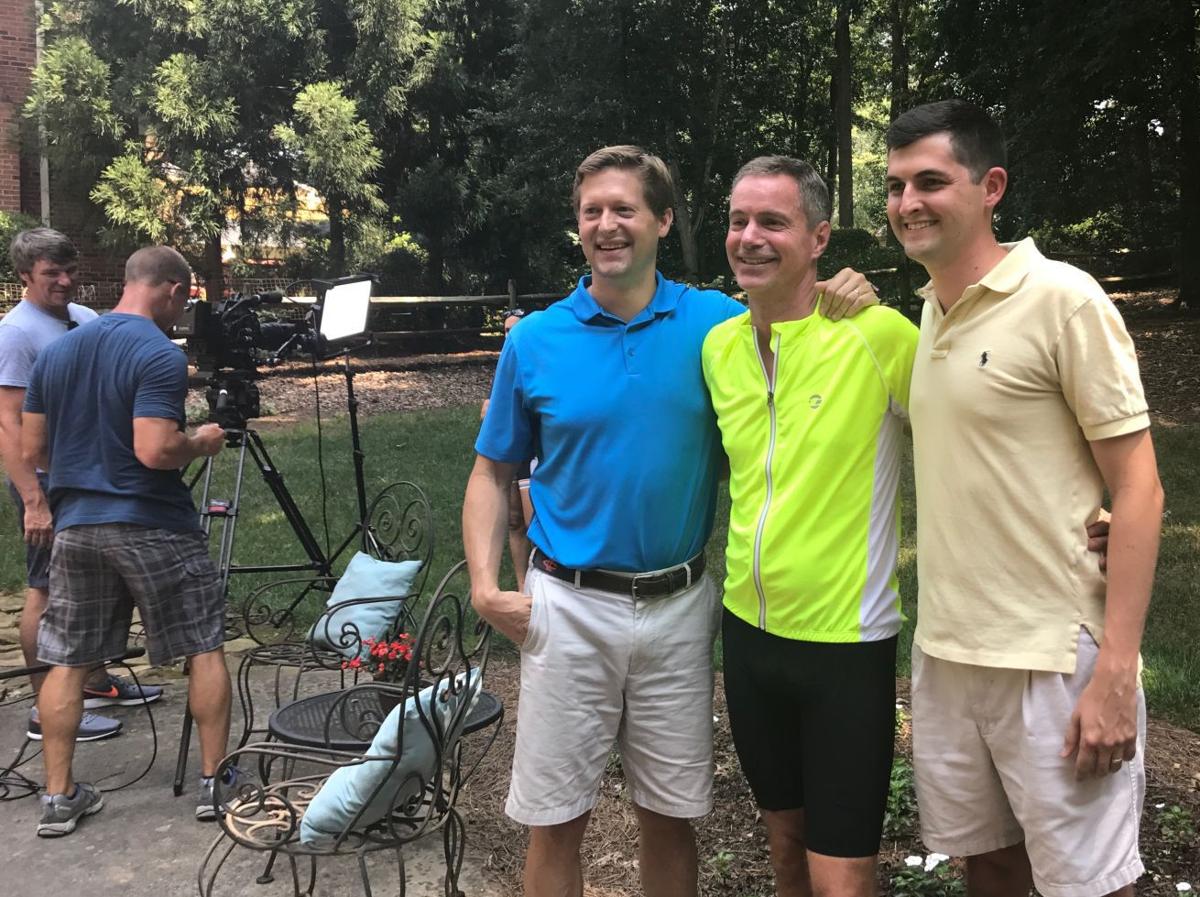 Dean Otto, center, was temporarily paralyzed last year when he was hit by a truck driven by Will Huffman, right. Dr. Matthew McGirt, left, fixed his spine. On Sunday the trio will run the Napa Half Marathon together. 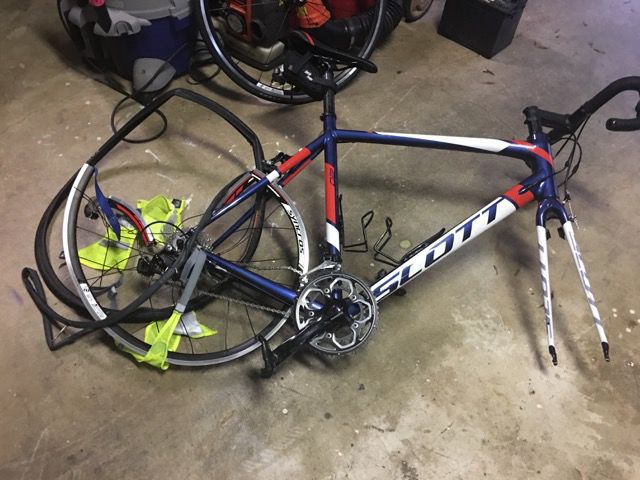 The bike that Dean Otto was riding in North Carolina when he was hit by a truck one year ago. 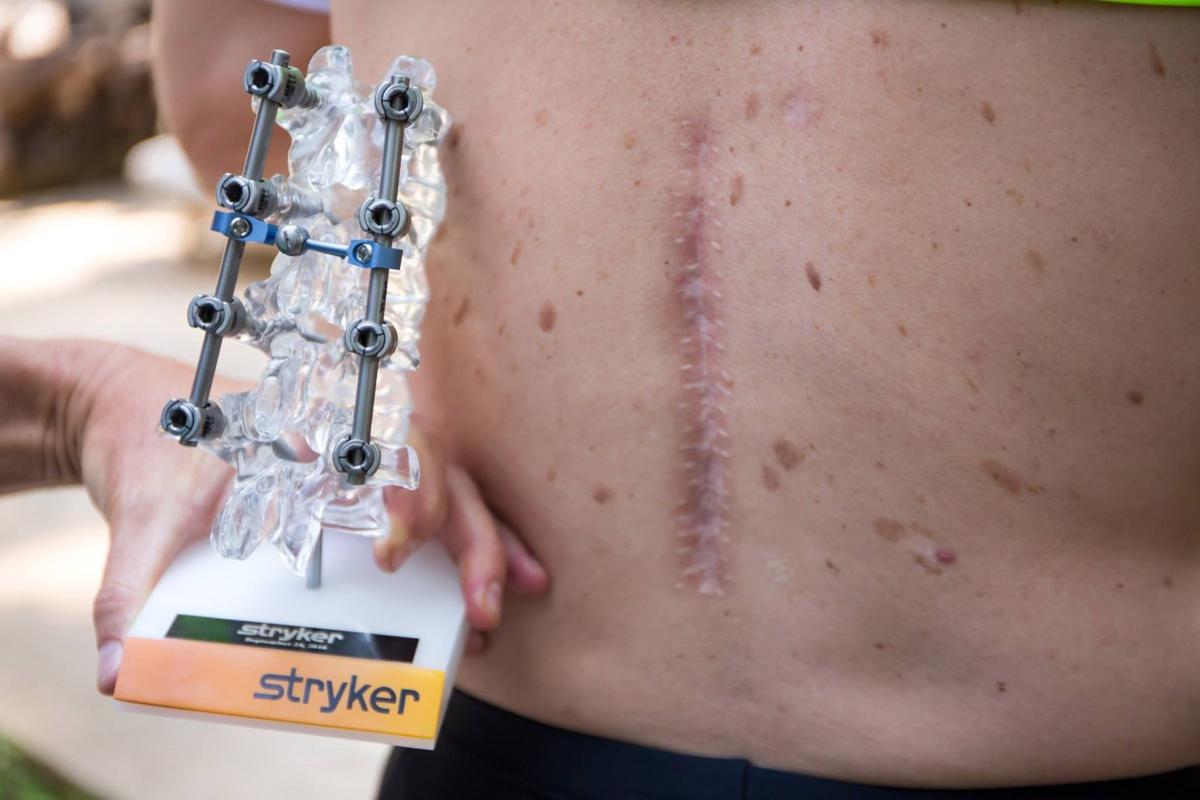 This photo shows the spine device that allowed Dean Otto to walk, and run, again. 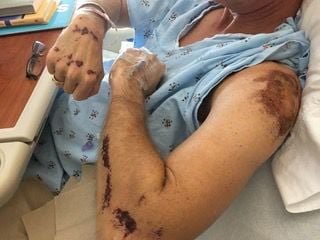 A photo of Dean Otto in a North Carolina hospital. One year ago he was hit by a truck. On Sunday he will be running the Napa Half race with his doctor and the man who hit him.

One year ago, Sept. 24, 2016, Dean Otto was in a North Carolina emergency room, unable to feel or move his legs.

Hours before, he’d been hit by a car while riding his bike. Otto was now paralyzed.

Today, almost exactly 365 days later, Otto is not only moving his legs, on Sunday he’s going to run the Napa Half Marathon. Remarkably, his two companions are the driver who hit him and the doctor who saved him.

“I had a 1 or 2 percent chance of ever walking again” and now “I’m going to run a half marathon,” Otto said last week. “It’s a pretty big deal.”

Otto, who lives in Charlotte, North Carolina, was on a Saturday morning bike ride in his home state when he suddenly felt the force of a huge mass crash into him.

The 52-year-old had been hit from behind by a truck. Otto said he instantly knew this was a serious accident and that his life was in grave danger.

When the truck driver, Will Huffman, rushed to his side, Otto recalled saying, “Stop. Don’t touch me. I can’t feel anything below my waist. I think I’m paralyzed.”

Otto was whisked by ambulance to Carolinas HealthCare System’s Carolinas Medical Center. Doctors determined he had minimal sensory function below the waist and a CT scan revealed that his spinal column was crushed inward.

He also had a broken pelvis, a broken tailbone, a broken leg and several broken ribs.

From there, things moved quickly. Only five hours after the accident, neurosurgeons at Carolinas HealthCare System Neurosciences Institute successfully performed a complex procedure to re-align and rebuild his spinal column.

“Timing in most trauma cases can mean the difference between life or death – walking or paralysis,” said Otto’s neurosurgeon Matthew McGirt, MD.

“Given Dean’s injury,” if he hadn’t been able to get into surgery quickly, “I am certain he would have spent the rest of his life with far greater neurological impairment.”

From toe wiggling to walking

Just one day after surgery, Otto, who was fiercely optimistic throughout his ordeal and recovery, asked Dr. McGirt if he cared to strike a bet.

The stakes? If Dean could wiggle his big toe, which would be a first after surgery, then McGirt, 42, would have to run a half marathon alongside him.

It turns out that while he had been hit on a bike, he’s actually more of a runner, Otto said. In fact, six days before his accident, Otto had completed a half marathon – 13.1 miles—in London.

Impressed by Otto’s spirit and good humor, McGirt agreed and Otto wiggled his big toe with as much gusto as he could manage.

Of course, before marathon training could begin, Otto had to learn how to walk again.

During his first weeks of rehab, he was cared for by LaTanya Lofton, MD, director of the spinal cord injury program at Carolinas Rehabilitation.

“From the very first encounter that I had with Dean, he was very positive and upbeat. He was convinced that he would walk again,” said Dr. Lofton.

Eager to make good on his wager with Dr. McGirt, Otto had his work cut out for him at rehab. “They really challenged me right out of the gate,” he said. “Literally five minutes after I got into the rehab facility, I was climbing stairs. I was astonished.”

Forgiving the driver who hit him

Along with Otto’s desire to repair his physical health, he wanted to heal emotionally as well.

That meant coming face to face with 27-year-old Will Huffman, the truck driver who accidentally hit Dean while he was cycling.

“I forgave him,” said Otto.

“He was there by my side – there to aid me. He didn’t run off and hide. He did the honorable thing.”

“Throughout the days and months following the accident, I knew I had Dean’s forgiveness,” said Huffman.

“It takes a lot to forgive, but it takes even more to form a friendship. Dean hasn’t just forgiven me and moved on, he’s gone a step further to really get to know me.”

“He’s been able to see past what happened and look forward to how we can work together to help others.”

Otto’s ability to forgive has had a profound effect on Huffman, who has decided to join Otto and McGirt for the half marathon.

The trio chose the Napa Half because it is on the exact same day as the accident. “Plus, all our wives seemed to be interested in coming to Napa,” said Otto. The run, hosted by Athletic Feat of Napa, starts and finishes at Skyline Park. Besides the 13.1 distance, runners can also choose to run a “half-” of 6.5 miles.

Eleven miles is the farthest he’s run since his injury, said Otto.

While his ultimate goal is to finish the race, “I’m going to try do it in under two hours,” he said.

Inspired by his own recovery and those that helped him, Otto is now helping to raise money for the LIFE (Living Fit and Engaged) Program at Carolinas Rehabilitation, a program to assist patients with spinal cord injury.

Otto’s group arrives in Napa on Friday and will run on Sunday. He’ll be accompanied by a “posse” of almost 20 friends and family, plus other supporters. In addition, a film crew for NBC Today will be present to take footage of Otto, Huffman and McGirt at the race. That story will air on NBC sometime after Oct. 1, they believe.

Doing the half marathon – especially with McGirt and Huffman — “will be emotional,” said Otto.

Over the past year, the three have become friends. Huffman later moved about five hours away from Charlotte, but McGirt and Otto trained for the half marathon together.

As word of the trio’s plan has spread, they’ve also appeared on the Ellen DeGeneres show and been written about in the New York Post, People magazine and featured on “Inside Edition.”

“I didn’t get into this to become famous,” said Otto, who still sells software for a company based in New York. “The bottom line is I got into this to raise money and awareness for a really good cause and we’re doing that.”

Such a health crisis “changes your perspective on life,” said Otto. “The outpouring of love from friends and family, the medical community — you find out how much people really love you.”

McGirt said the run on Sunday is a celebration of Otto — first his patient, and now his friend. “He’s such a great example of what can be achieved in modern medicine,” he said.

Also, “I’m celebrating Will and Dean because they are an example of what happens when two people do the right thing. I’m celebrating those two guys and how they have handled this.”

“Will is a better person for it. Dean has been graceful from day one,” said McGirt. “That’s been great to watch.”

Asked if he was a runner before training for the Napa Half marathon, McGirt laughed and said, “I am now.”

During the run on Sunday, “We’ll be spiritually fired up (and) emotionally high,” predicted McGirt. “The next day might be ugly,” but it will be worth it.

“I’m excited,” said Huffman. The run is “symbolic in so many ways.”

“It’s going to be tough on all of us, physically,” Huffman said. “But the fact that we get to do it side by side, it’s like bringing the whole thing full circle.”

In fact, the group should be finishing the half marathon right about the same time that the accident took place exactly one year earlier, he noted.

When the three men cross that finish line at Skyline Park together, “I think it will be pretty emotional for all of us,” Huffman said.

“I am thrilled that he has chosen our race to celebrate this incredible milestone,” said Dame Rahal of Athletic Feat, the producer of the Napa Half.

“Every person I told the story to had goosebumps,” she said. “I cannot wait to cheer him across the finish line. It really isn’t the finish line for Dean. It is the beginning of another adventure.”

Napa Half starts and ends at Skyline Park.

Jonathan Garza and Isaac Dolido will celebrate their eighth anniversary together on June 1. The following day they will leave on a 545-mile, s…

Dean Otto, center, was temporarily paralyzed last year when he was hit by a truck driven by Will Huffman, right. Dr. Matthew McGirt, left, fixed his spine. On Sunday the trio will run the Napa Half Marathon together.

The bike that Dean Otto was riding in North Carolina when he was hit by a truck one year ago.

This photo shows the spine device that allowed Dean Otto to walk, and run, again.

A photo of Dean Otto in a North Carolina hospital. One year ago he was hit by a truck. On Sunday he will be running the Napa Half race with his doctor and the man who hit him.