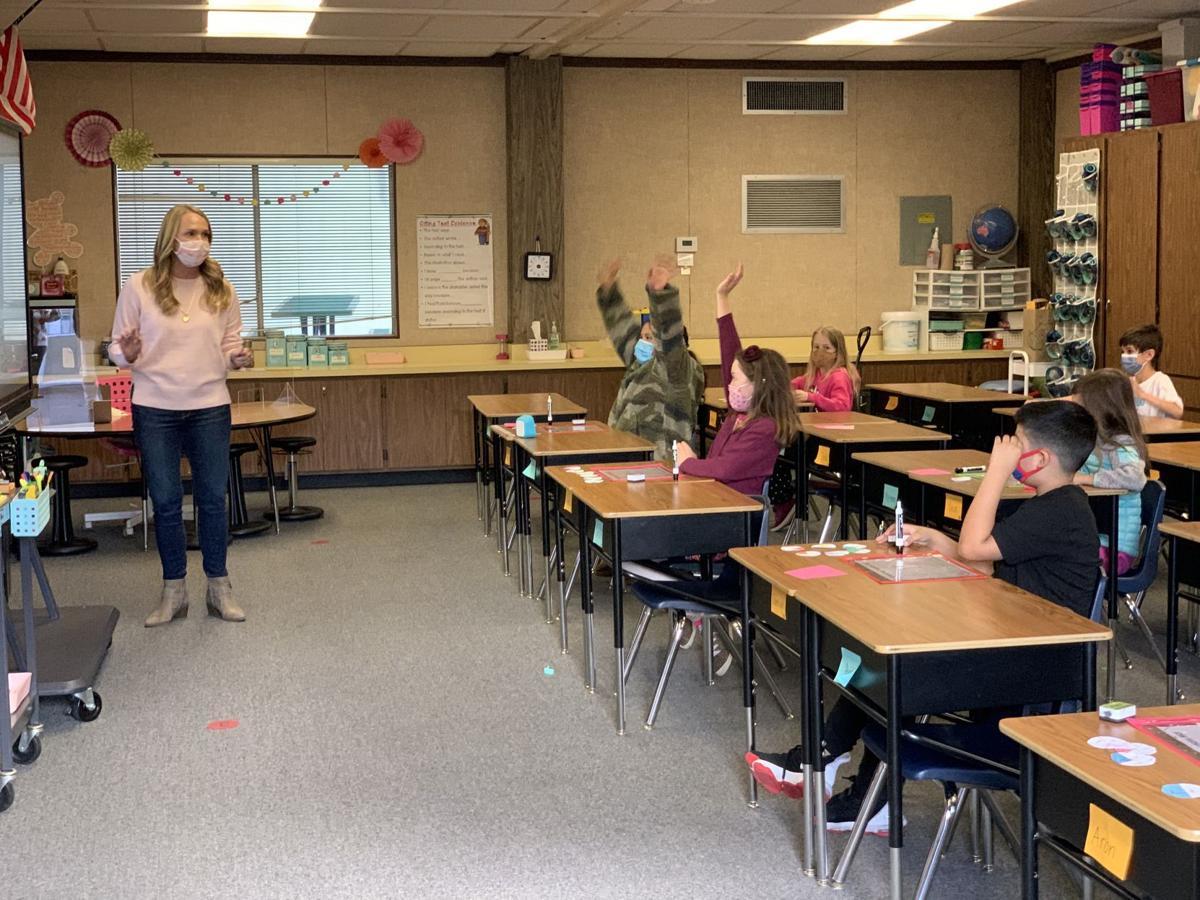 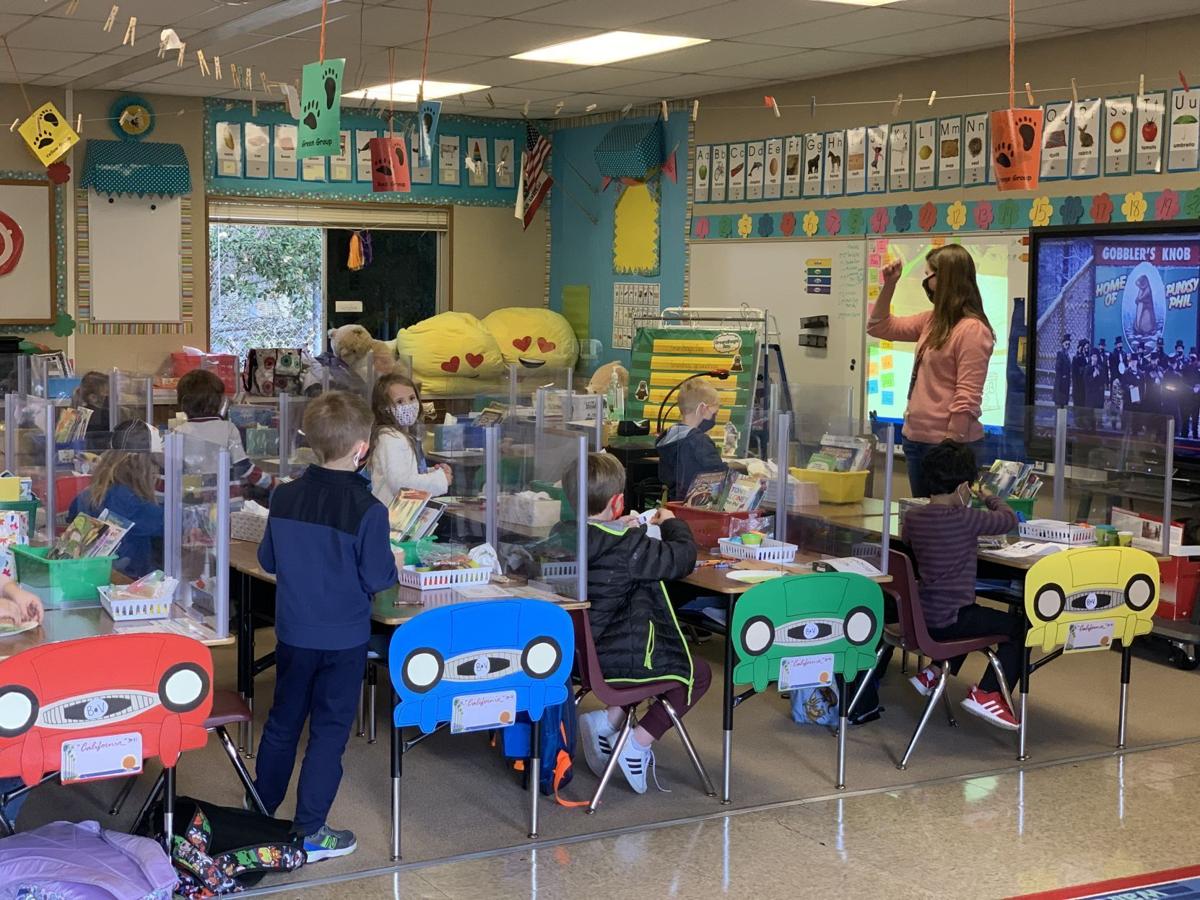 Kindergarten students in Christina Lawrence's classroom at Browns Valley school wear masks and work at desks with plastic barriers. Each has their own container of supplies. Due to the COVID-19 pandemic, most NVUSD students are only in the classroom twice a week and learning remotely the rest of the week. 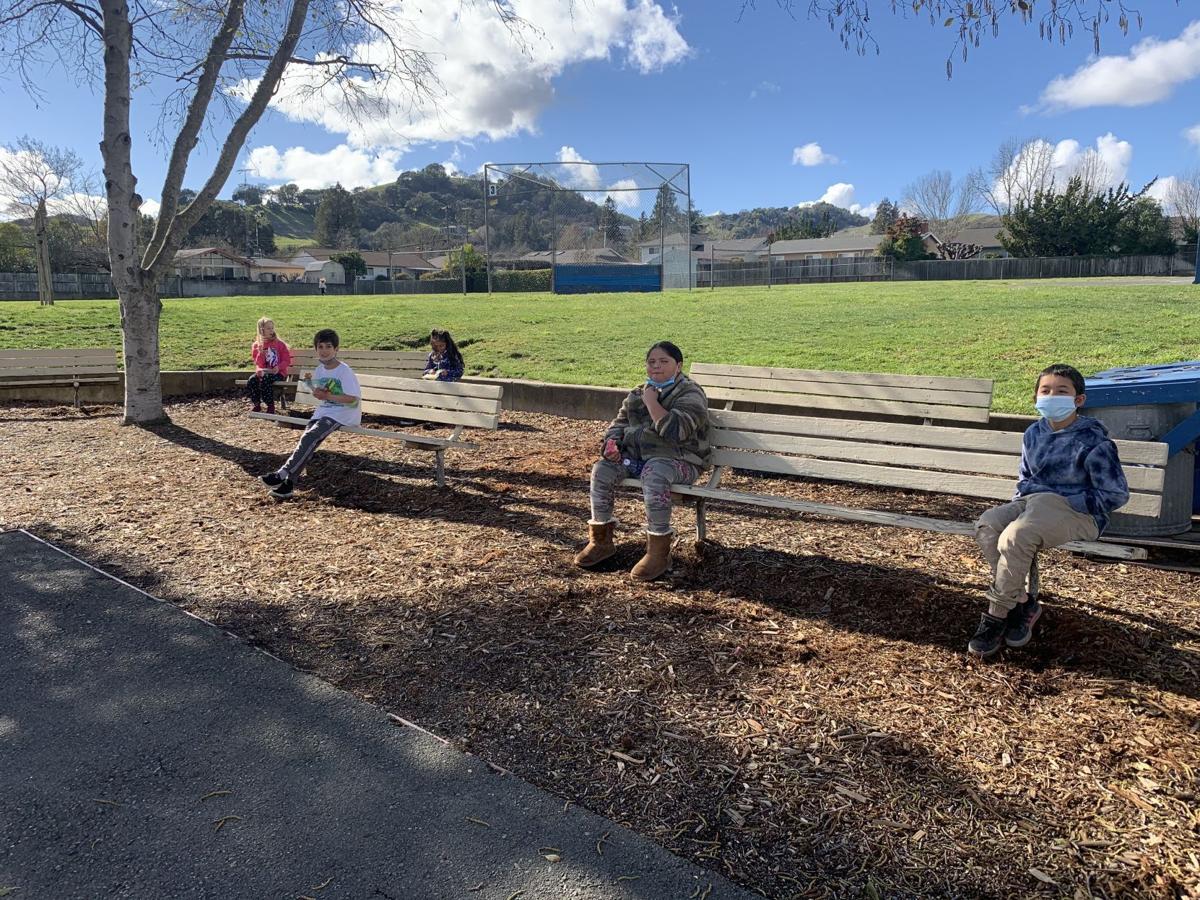 Browns Valley Elementary School students takes a break outside but remain socially distant due to COVID-19. 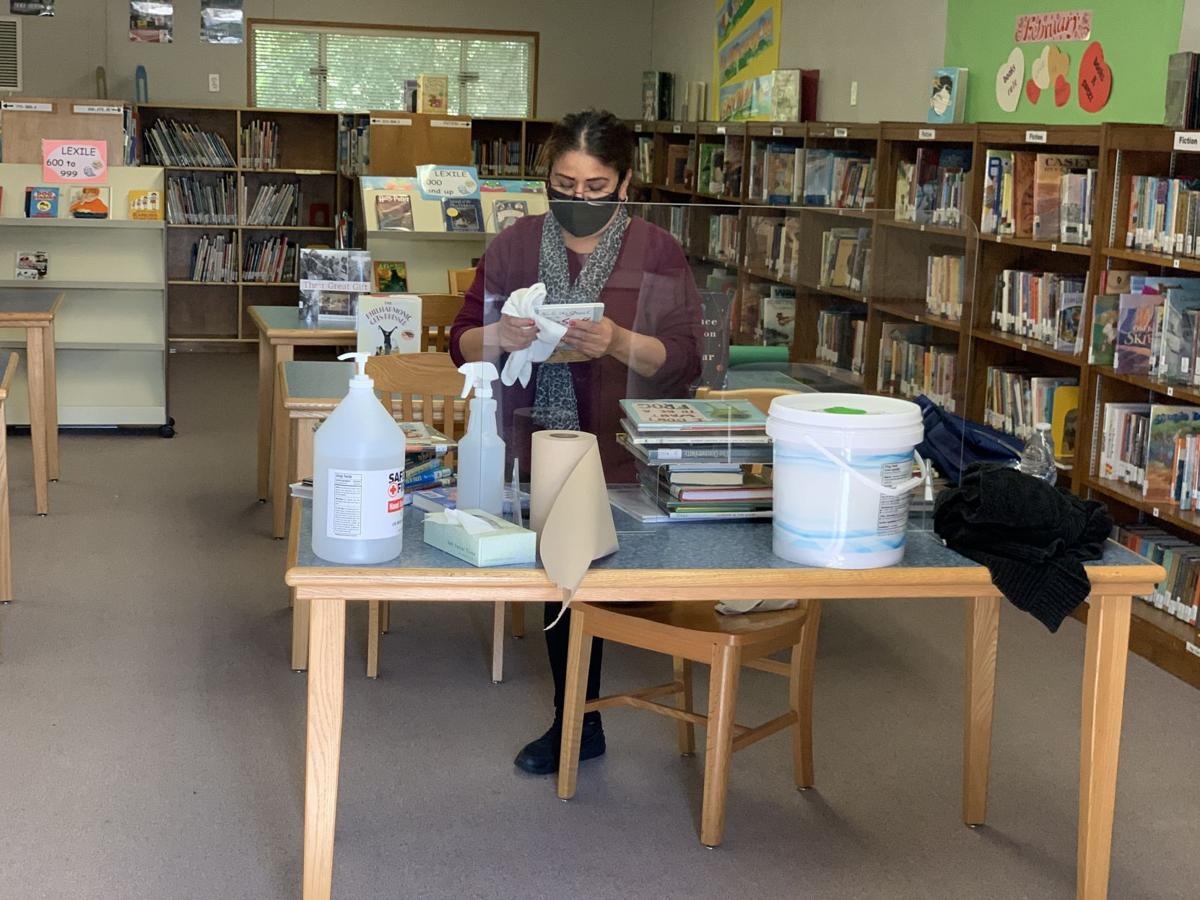 A Browns Valley Elementary School staffer sanitizes books in the school library. Due to COVID-19, much about the school day is changed. 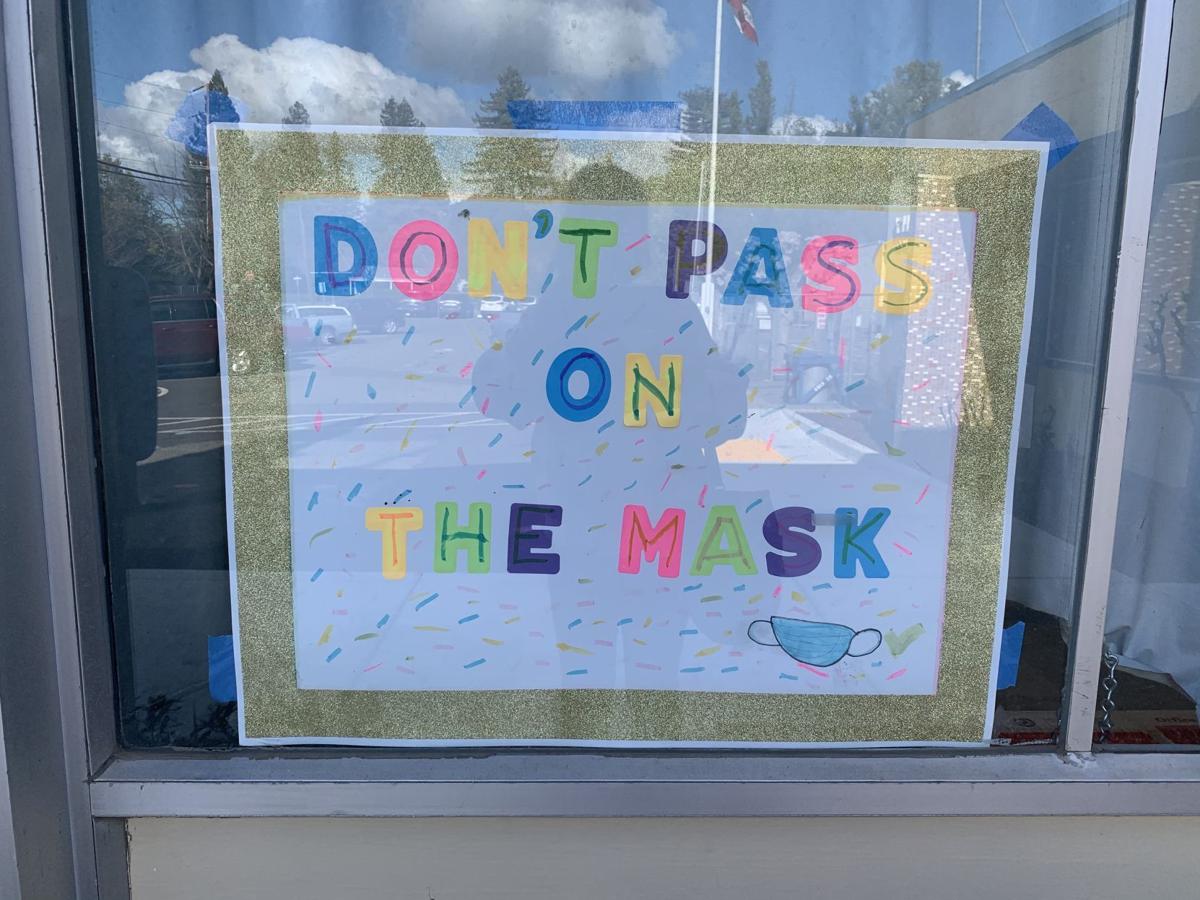 Signs at Browns Valley Elementary School during the COVID-19 pandemic.

Almost one year after COVID-19 temporarily emptied its campus of students, life at Browns Valley Elementary School in Napa has returned to “normal” — or at least a new normal.

Students are back on campus. Teachers have returned to their classrooms. Parents are once again picking up and dropping off in mornings and afternoons.

However, much of that routine now looks and works completely different than it did at the beginning of 2020.

The students are getting instruction five days a week. However, they attend classes in person only twice a week, for just two hours and 20 minutes a time. (On Wednesday, the NVUSD announced that it will offer four half-days a week of in-person instruction starting March 1.)

During the other hours of each school day, students do follow-up activities based on class instruction. This independent study time is known as “asynchronous learning.”

“It’s been difficult but we are rising to the occasion and we’re doing what’s best for kids,” said Principal Frank Silva.

“I am very proud of what the school community has accomplished over the past 10 months,” he said. “It is about what is best for our students,” he said. “If you focus on that one goal everything falls into place.”

Out of the school’s 465 students, about 280 are attending school in person, said Silva. That 280 is split into two sets or “cohorts” of 140 each. Silva estimated that about 185 students are still doing distance learning exclusively.

However, he noted that the number of in-person students at Browns Valley Elementary is rising. “The science shows that students are safe at school,” and more parents are becoming comfortable about in-person learning again.

“We have a great relationship with our parents and they have a high level of trust in our staff and community teachers and staff doing what’s best for kids,” Silva said. In fact, “we’ve had zero cases of COVID-19 spreading” at Browns Valley Elementary, he said. He attributes that to how carefully the school follows pandemic protocols such as handwashing and social distancing. All students wear a mask.

“There cannot be any gray areas” when it comes to following such requirements, said Silva.

When kids are in classrooms, clear plastic dividers or extra space separate each desk. There’s no sharing glue or scissors these days — everyone has their own bin of supplies.

Even the morning drop-off is different. All students fill out a health screening questionnaire every day. “If a student displays symptoms, that student is to stay home and virtually learn for 10 days until they are cleared to come back,” said Silva.

The school’s custodial staff has been another key partner, said Silva. “We have all the PPE we need.” Doors and windows are opened, fans are on, vents are open and air purifiers in use.

Hundreds of colored dots were painted on the pavement on school grounds. Students know that each dot represents where they should stand to maintain social distancing. Red lines indicate boundaries for student groups.

Only one student is allowed to use specified bathrooms at a time and the main entry doors to each bathroom stay open for ventilation. Bathrooms are cleaned two, even three times a day.

All water faucets have been taped over. Kids bring their own water bottle and water to school, “just as if they’d bring a pencil to school,” said Silva.

Work packets and items from teachers for parents are left on a table outside the school’s front office. Signs in both English and Spanish about wearing a mask and COVID-19 symptoms are on display, as well as a standalone hand sanitizer dispenser.

“We have a lot to be thankful for,” reads one sign.

“Don’t pass on the mask,” reads another.

“They are so compliant,” she said. After months of exclusively distance learning, “I think they were craving routine. They are just happy to be here.”

“We’ve been doing it for so long, I don’t even have to think about it,” Silva said.

Yes, the thought of teaching school via Zoom-only at first had her wondering how teaching during a pandemic would work, said Lawrence. However, “They’re still connecting. We’re still making relationships. They are still learning. Kindergarten is still magical,” she said.

On a recent afternoon, a small group of third graders from teacher Carly Berens’ classroom took an outdoor break. Each student carefully maintained their 6 feet of distance, but still managed to socialize at the same time.

Levi, a student in Berens’ class, said that he was really happy to be back on campus, even if it is just two days-a-week.

“I hadn’t been to school for so darn long,” he said. Distance learning alone is not for him, said Levi. “It’s really hard to stare at a screen for two hours,” he said, referring to his Zoom lessons on the days he’s not on school grounds.

“I just like being able to see everyone in my class and my teacher,” he said.

Victoria, another third grader, said the same thing — in-person school is much more fun. “I get to see my beautiful school,” she said. “And all the trees are grown and the classrooms are big and we have a desk.”

Berens said she feels much more prepared this second COVID-19 school year, compared to the last school year when the pandemic started.

“We’re persevering really well,” she said. “We always say that kids are resilient, this just highlights how resilient they are. They are taking this better than some adults,” she said with a smile. “They go with the flow, this is normal right now.”

The same applies for her as well, said Berens. “I’m getting good at doing what’s in front of me,” instead of worrying about the future, “and showing kids perseverance in the moment.”

The Napa Valley Unified School District will still allow parents to opt out of in-person learning.

Napa public schools prepare to reopen Monday; half of students to combine in-person with virtual learning

After more than a seven-month shutdown, twice-a-week at-school learning resumes Monday for many NVUSD students.

The continuation of distance learning when Napa schools restart in August has sparked sharp differences of opinion.

Students at Browns Valley school channeled grief for a classmate who died unexpectedly into an artwork Tuesday.

NVUSD records 166 positive tests among students and staff. Transmission is believed to have occurred off campus.

Napa's public school system has announced it may have to close a middle school amid falling enrollment and the resulting decrease in state financial support.

The Whistleblower Protection Act would prohibit reprisal against whistleblowers who disclose misuse or mismanagement of COVID-19 relief funds.

For the first time in six days, Napa County reported no COVID-related deaths on Thursday.

Don't destroy the livelihood of teachers

Letters: We can make the schools more attractive to students.

Some Napa school traditions manage to live on, pandemic or not. Like picture day.

Who's taking classes on campus these days at Napa Valley College? It's a different world since COVID.

Napa residents tell their stories of life during the coronavirus pandemic

Napa County life changed dramatically when the coronavirus pandemic hit a year ago. And it's still changing.

Kindergarten students in Christina Lawrence's classroom at Browns Valley school wear masks and work at desks with plastic barriers. Each has their own container of supplies. Due to the COVID-19 pandemic, most NVUSD students are only in the classroom twice a week and learning remotely the rest of the week.

Browns Valley Elementary School students takes a break outside but remain socially distant due to COVID-19.

A Browns Valley Elementary School staffer sanitizes books in the school library. Due to COVID-19, much about the school day is changed.

Signs at Browns Valley Elementary School during the COVID-19 pandemic.