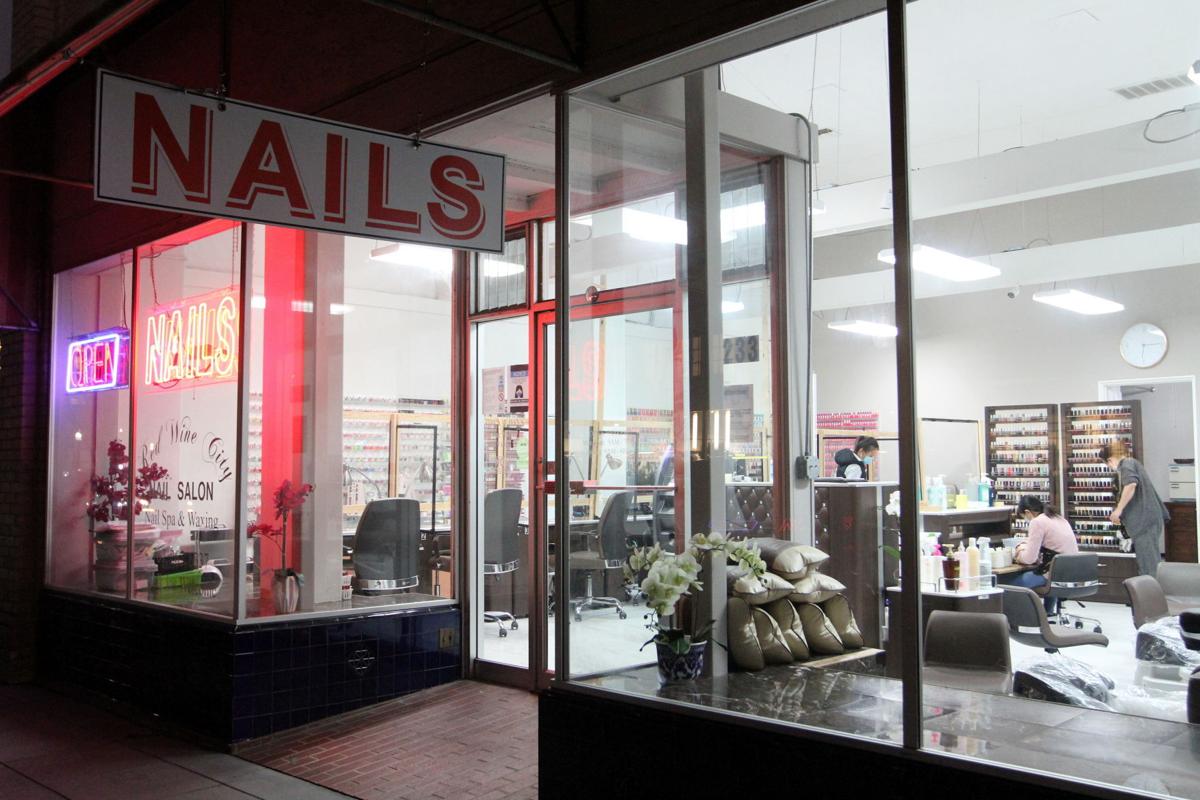 Employees inside Red Wine City Nail Salon in downtown Napa on the evening of Friday, Feb. 19. Many hair and nail salons - which have been closed for four months over the course of the pandemic - have survived thanks to PPP loans, rent forgiveness or other kinds of financial assistance, according to Downtown Napa Association Executive Director Craig Smith. 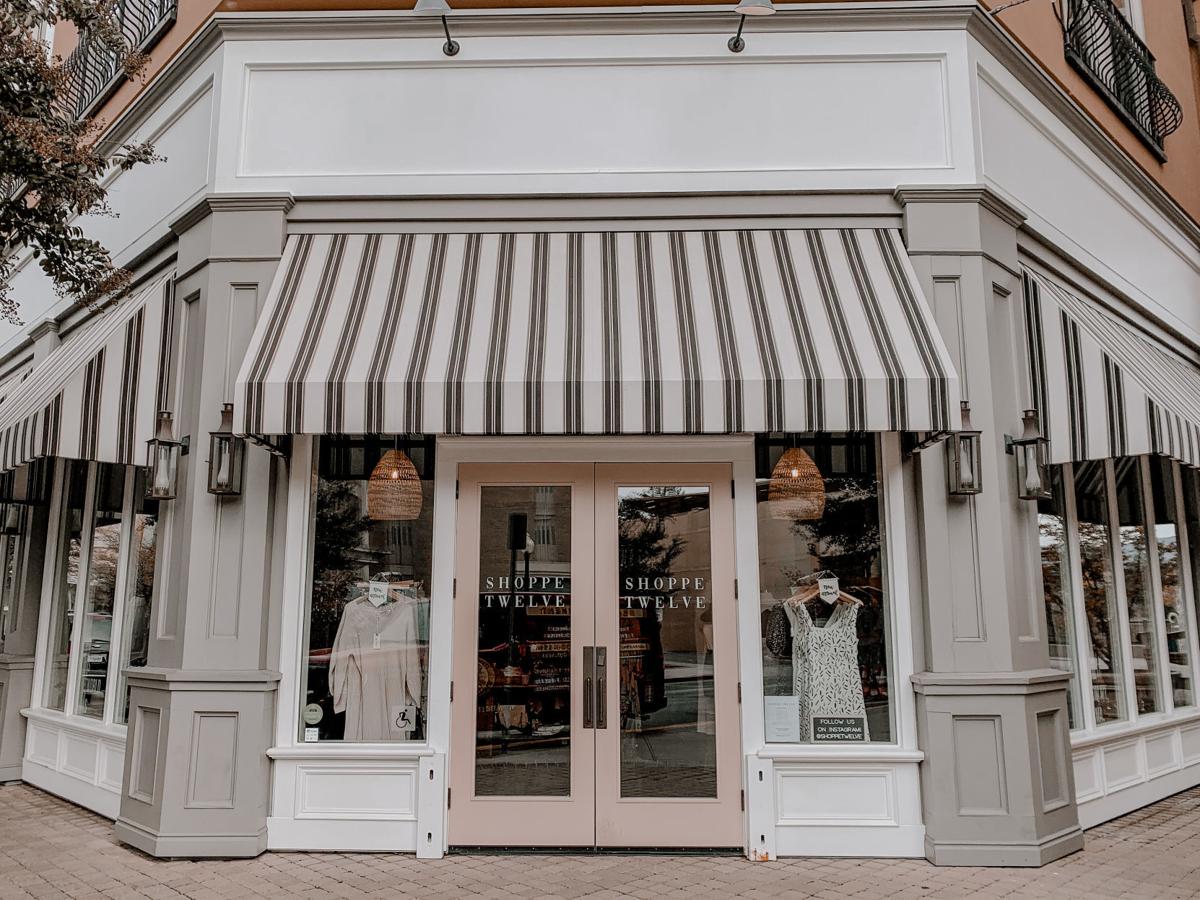 Outside of Shoppe Twelve in downtown Napa. The store has been closed for three of the last eleven months, owner Sarah Lane said, but business is beginning to recover, especially as restaurants have reopened for outdoor dining.

Business at Venus Nail & Spa comes in waves. Some days are horribly, inescapably slow; others, there might be a sudden flood of customers, a mix of appointments and hopeful afternoon walk-ins.

That’s the kind of crest that can make a day feel almost normal for owner Hien Tran — except that sometimes he must then turn a few of those would-be patrons away.

Foregoing business is particularly painful after a year in which Tran’s business has spent more than four months closed to the public.

“We didn’t have any income, and we still paid rent and bills,” Tran said of the months he spent closed, noting he’s had to intermittently furlough staff throughout the year.

California’s nail and hair salons can now open for indoor service at 25% capacity, Tran said, meaning he can’t have more than three customers in his salon at a time. He’s grateful to be able to operate at all, but business is recovering somewhat slowly. Much of his regular clientele are still hesitant to come in, and those that do aren’t coming as often as they once did.

Three months’ worth of closure “can easily kill a business,” according to Sarah Lane, who owns the women’s clothing store Shoppe Twelve in downtown Napa. Small retailers like Shoppe Twelve purchase merchandise ahead of time and rely on subsequent sales to pay back sunk costs and expenses like rent and employee salary, Lane said. When her store closed in March of 2020, sales fell off a cliff, instantly dipping far below the threshold of what it would take just to break even.

Hoping to scrounge together at least some business, Lane launched a revitalization of her existing website and began offering home deliveries around Napa. It was especially frustrating during that initial shutdown to watch as the clothing sections of “big box retailers” like Target and Walmart were allowed to remain open, according to Lane, who said she was having to work “10 times as hard to make a fraction” of normal revenue.

“Our sales were 90% down during the three months we were closed,” she said. “We barely brought in enough to keep the lights on, and we were having to work tremendously hard (to do even that).”

Her business did receive a meager PPP (Paycheck Protection Program) loan, Lane said though the portion she could put toward operational costs did not cover even a whole month’s rent. Ultimately, she pulled from her savings to ensure the business survived those months closed.

For a number of Napa’s businesses — salons, especially — PPP loans were the difference between reopening and closing for good, according to Craig Smith, executive director of the Downtown Napa Association. Others have survived thanks to grants from the city of Napa or the Chamber of Commerce, he said; more still were granted flexibility on rent by their landlords.

More businesses have actually opened than closed in downtown Napa this year, according to Smith, who said at least a handful — mostly restaurants and retailers — have shuttered their doors over the course of the pandemic. He voiced some concern a wave of additional closures could come this fall.

“I know some landlords have made agreements to forego rent until a later date, but someday it’ll be time to pay the piper,” he explained.

Hopeful, though, are the early signs of recovery Napa is beginning to see: hotels downtown were close to full over Presidents’ Day Weekend and the weekend afterward, meaning more guests to patronize local businesses.

“On President’s Day Weekend, there were up to two hour waits at restaurants if you didn’t have a reservation,” Smith said. “I suspect that added a lot to the shopping (that weekend) because people had time to go out and do things. It’s definitely an ecosystem here.”

Presidents’ Day was the best weekend Napa Running Company has seen since the initial onset of the pandemic, according to owner Leslie Parker. Her shop, which has a website but not an established online store, “limped along” through last year’s springtime shutdowns — in part because Parker continued to come in each day, offering home deliveries and letting customers do curb-side shoe try-ons.

Parker did not apply for a PPP loan — she and her husband “did not want to chance owing more money,” she said, especially as they were struggling to pay rent in the spring of 2020.

“We had some deep, dark conversations, like — ‘at what point do we just stop?’” Parker said.

As lockdowns trailed on, though, former gym-goers turned to running to scratch their exercise itch and business at Napa Running Company picked up — enough so that sales actually up year over year, according to Parker, who said the outdoor running boom had, to her amazement, “saved” her store.

For Shoppe Twelve, the first sign of hope came as businesses were allowed to reopen for the first time in June, Lane said. Because Napa was one of the first counties in the area to reopen, customers from around the Bay flooded her store in droves. Business declined through the last shutdown, Lane said, but she’s optimistic about the coming months now that restaurants have reopened for outdoor dining.

“When restaurants are closed, that’s when we see numbers go down,” Lane said, echoing Smith. “It’s a trickle effect — the downtown businesses, we all need each other. And when we’re all open, that’s when we’re doing our best, but when one of us has to close, it impacts everybody.”

Still, for Venus’s Tran, the year ahead looks to be something of an uphill battle: despite receiving some assistance from the city of Napa, business is still 80% down year over year. And there is no loan that can replace his regular, eager clientele base.

“Customers are still nervous,” Train said. “They’re still worried about COVID, so they’re not coming. They’re just not ready to (get their nails done) again.”

The new Avalon Nail Salon in south Napa may be temporarily closed due to the COVID-19 pandemic, but business owner Andy Nguyen has big plans for his second Napa salon.

Napa restaurants welcome return to outdoor dining, but hope indoor dining is next

PG&E crews are making repairs to a damaged line on Pine Street, the utility said.

Napa County on verge of jumping to red COVID-19 rating

Napa County has the numbers to improve to a red COVID-19 rating, if it can only maintain them for two weeks.

The number of vaccine doses given to county residents is approaching 50,000.

Napa business owner Sarah Lane has a passion for fashion, and two stores to match.

Long before masks and social distancing became part of our daily lives, Eileen Rinaldi, owner of Ritual Coffee Roasters, knew that something big was coming.

Craig Smith's Downtown Talk: Are those wedding bells I hear?

Employees inside Red Wine City Nail Salon in downtown Napa on the evening of Friday, Feb. 19. Many hair and nail salons - which have been closed for four months over the course of the pandemic - have survived thanks to PPP loans, rent forgiveness or other kinds of financial assistance, according to Downtown Napa Association Executive Director Craig Smith.

Outside of Shoppe Twelve in downtown Napa. The store has been closed for three of the last eleven months, owner Sarah Lane said, but business is beginning to recover, especially as restaurants have reopened for outdoor dining.