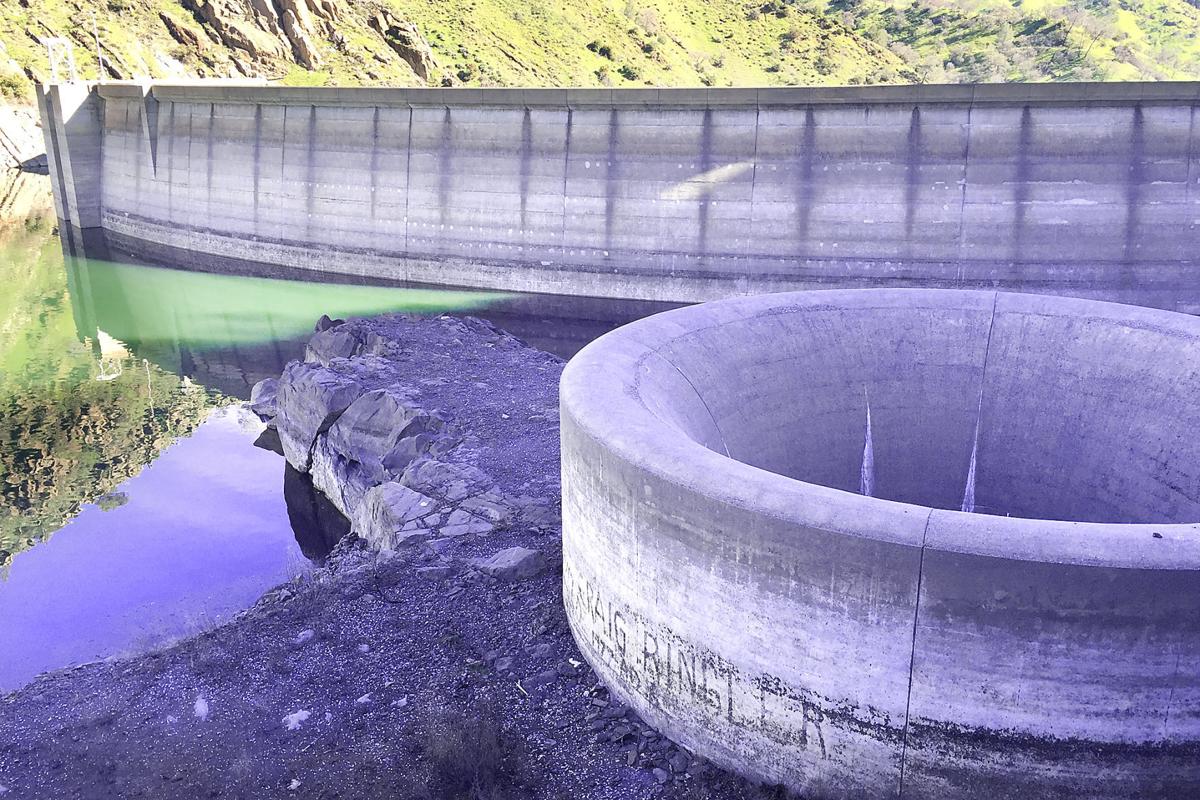 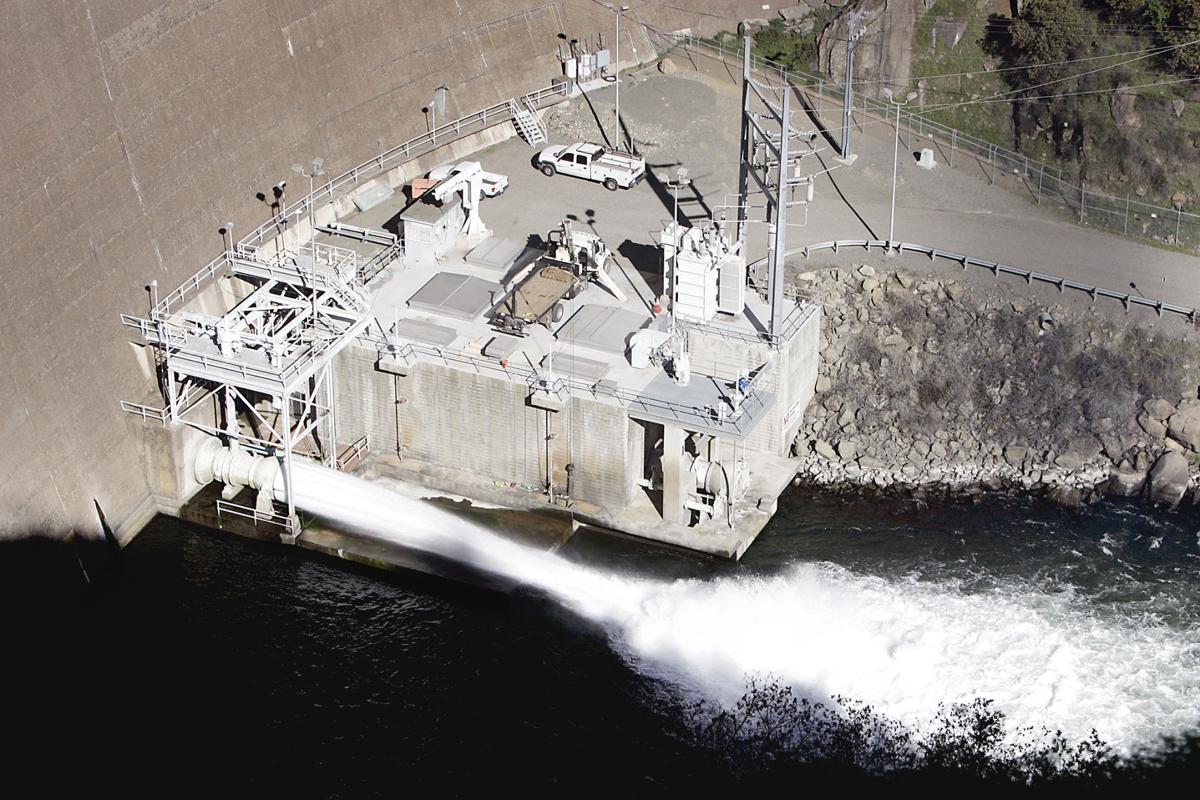 Water is released from the Monticello Hydroelectric Power Plant at the base of Lake Berryessa's Monticello Dam earlier this month. 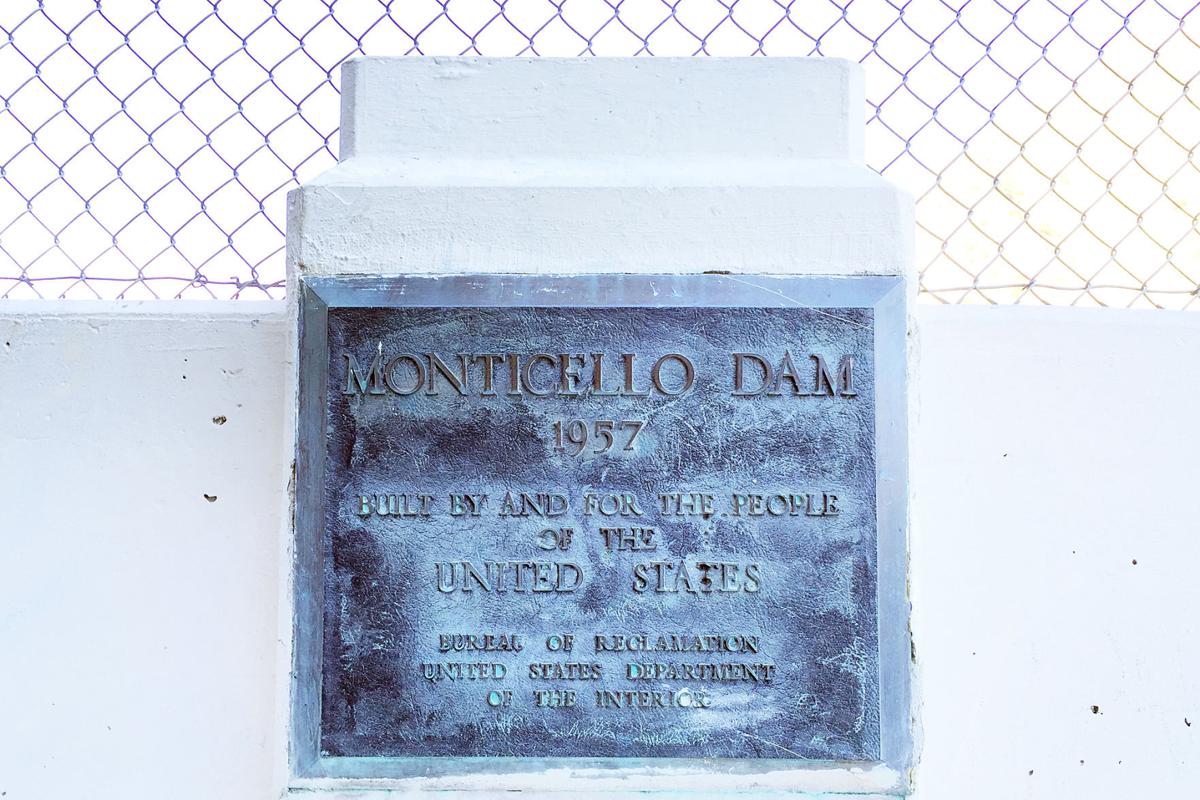 The marker at the Monticello Dam at the Napa and Solano county line reads: "Monticello Dam 1957 Built by and for the people of the United States" and is signed by the Bureau of Reclamation, United States Department of the Interior.

Since the completion of Monticello Dam six decades ago, the east Napa County reservoir has never gone more than 10 years without topping its spillway. But it last spilled in early 2006 and is nowhere near to spilling again.

Lake Berryessa is about 56 percent full, statistics show. Lake levels would have to rise almost 39 feet to send water rushing into the spillway, something unlikely to happen in the waning days of the 2015-16 rain season in the absence of truly monstrous, flood-producing storms.

The last time people saw the spillway in action, George W. Bush was president, Arnold Schwarzenegger was governor and the Golden State Warriors were a last-place team.

Water in a full lake pours into what looks like a giant funnel that is 72 feet in diameter near Monticello Dam. It then disappears from view, only to reemerge from a pipe at the base of the 300-foot-tall dam on Putah Creek to water cities and farms in Solano County.

A spilling lake is a temporary, mini-tourist attraction. People drive to Monticello Dam to watch.

On the positive side, the decade since Lake Berryessa last filled hasn’t seen the reservoir dry up. The lake can hold 1.6 million acre-feet of water and is holding about 890,000 acre-feet (an acre-foot is about 325,000 gallons). That’s still enough to serve Solano County cities and farms and provide recreational opportunities in Napa County.

“That’s a substantial amount of water,” Sanford said. “We’re not where we’d like to be, but we’re in much better shape than some areas of the San Joaquin Valley.”

Lake Berryessa has spilled many times. The spillages often comes in multi-year streaks, as do the dry times.

The U.S. Bureau of Reclamation finished building the giant plug of concrete that is Monticello Dam across Putah Creek in 1957. Then the wait began for enough water to back up across the Berryessa Valley to create the reservoir.

Before the building of Monticello Dam, skeptics had predicted the surrounding watershed would prove to be too small to ever fill Lake Berryessa. But on the night of April 18, 1963, water washed into the glory hole for the first time.

The lake spilled for the second time in 1965. This time, the cable around the funnel broke and federal officials warned boaters to stay away.

“If anybody doesn’t heed this warning, they’ll go over the hole, probably to their deaths,” Robert Pafford Jr. of the Bureau of Reclamation said.

In 1982-83, California had one of the wettest years in its recorded weather history. Lake Berryessa water levels rose several feet above the drain, the highest ever, according to newspaper reports from the time. The reservoir has never been more full.

The lake filled during the Valentine’s Day storms of February 1986 that caused flooding all over Northern California. It would be a decade before water would again enter the glory hole.

But the 1987-’92 drought was a much worse time for Lake Berryessa than the present drought. The lake in late 1992 was less than 30 percent full, holding a little over 400,000 acre feet. Foundations from the town of Monticello reemerged from the water.

Just when it looked like Lake Berryessa would dry up, the rains returned. It took a few years, but at 2:06 a.m. Feb. 23, 1996, waters once again poured into the glory hole.

“We survived the drought,” proclaimed a banner on Monticello Dam.

Lake Berryessa spilled again in 1997. The glory hole that year also experienced what federal officials called its first death when a distraught, fully clothed woman swam out to it, stood on the lip and tumbled in.

The spillway last saw water after the New Years storms of late 2005 and early 2006. Since then, the closest Lake Berryessa has come to filling was in early 2011, when the reservoir was about 87 percent full.

Lake Berryerra resident Craig Morton began visiting the reservoir in the 1960s. The lake can rise 50 feet in a really big rain year, he said—more than enough to once again top the glory hole.

“It depends on how the storms come,” Morton said. “So far, we’ve had good water at times, but not consistently.”

Sanford said the storms this year have often been gentler rains that percolate into the ground.

“We haven’t had any days where it’s just pounded and you generate short-term runoff,” he said.

The historic window for big storms will soon close for the 2015-’16 rainy season. March is probably the last chance for Berryessa to receive the type of runoff that could at least give it a big boost toward filling in 2017.

Things will have to go better than in March 2015. The city of Napa last year received a tenth of an inch for the month, the smallest amount since the mere .02 inches in 1923, figures show.

What’s needed is a March such as in 2012, when Napa received more than nine inches or, better yet, 1995, when it received almost 12 inches, officials say. That’s the type of month that could help Lake Berryessa once again see its spillway glory days.

The U.S. Bureau of Reclamation expects Lake Berryessa reservoir to fill and run into its glory hole spillway at some point in coming days for …

Water is released from the Monticello Hydroelectric Power Plant at the base of Lake Berryessa's Monticello Dam earlier this month.

The marker at the Monticello Dam at the Napa and Solano county line reads: "Monticello Dam 1957 Built by and for the people of the United States" and is signed by the Bureau of Reclamation, United States Department of the Interior.