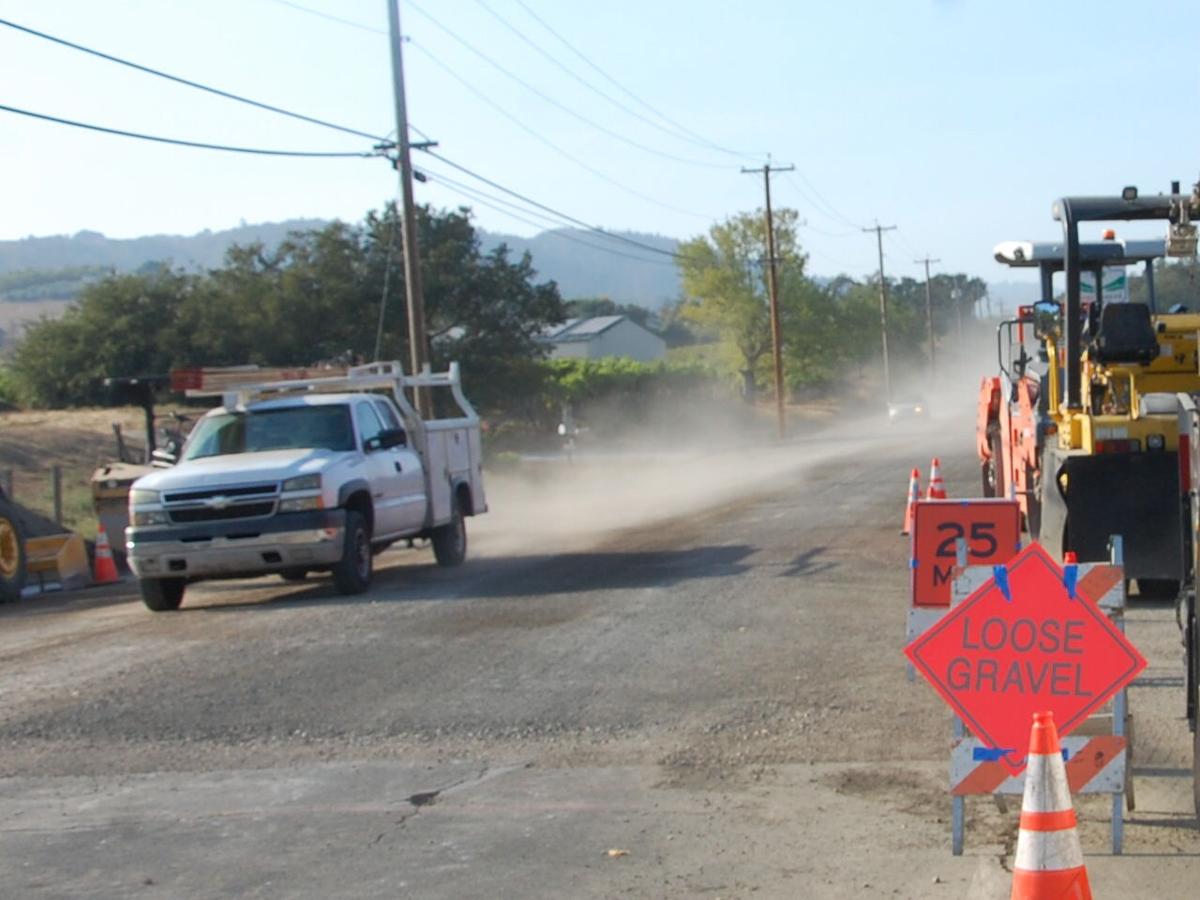 Dry Creek Road north of the city of Napa last weekend was a dirt road. Napa County had removed the pavement in preparation for a rebuild. Workers early this week were putting in new asphalt. 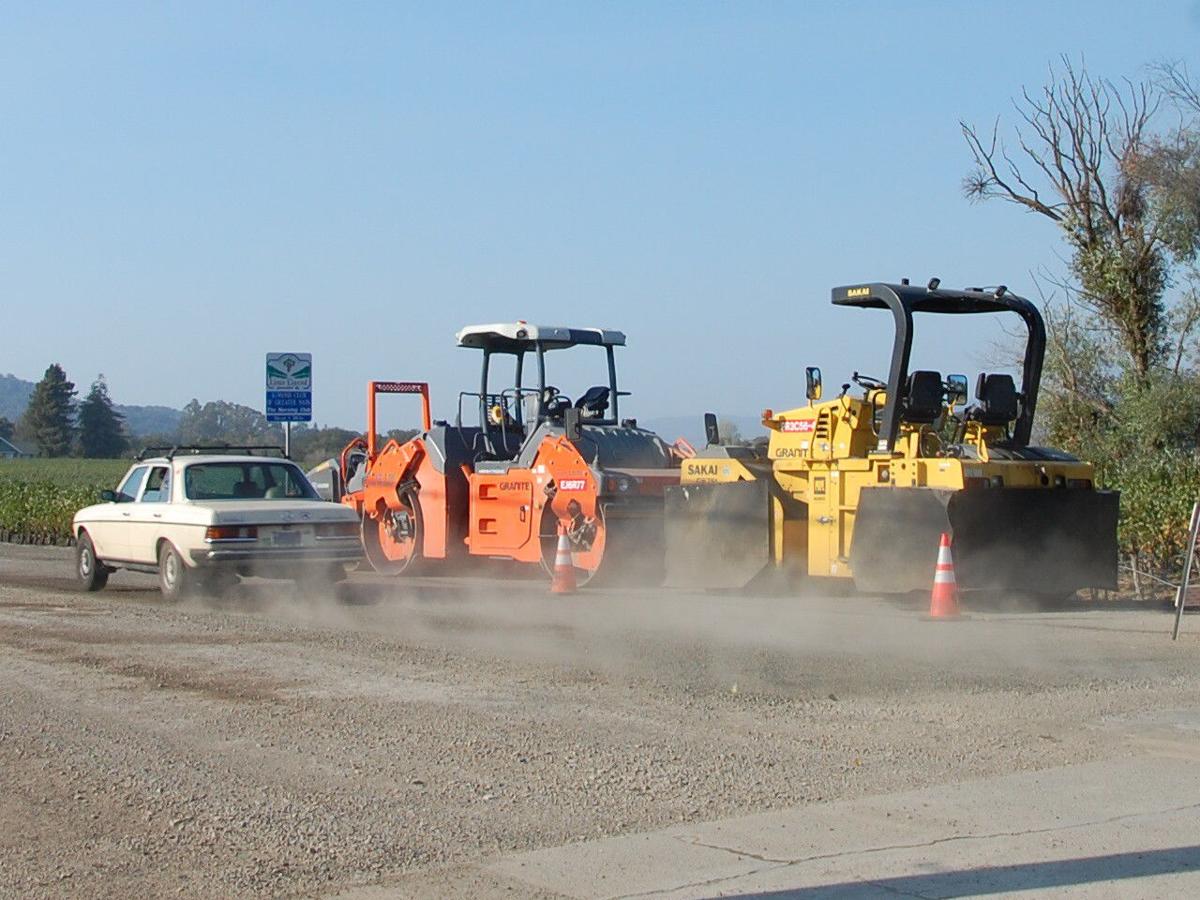 Vehicles last weekend kicked up some dust on Dry Creek Road in the rural county just north of the city of Napa. Workers had removed the pavement in preparation of rebuilding the road. They started putting down new pavement early this week.

It's been one big step backward and two big steps forward for heavily traveled Dry Creek Road just north of the city of Napa.

The step back came late last week. Dry Creek Road for the one-mile section from Napa city limits to Orchard Avenue had become a dirt road. Cars driving on it kicked up a cloud of dust if the watering truck hadn’t been by recently.

It seemed like old times — old, as in a century ago. A horse-and-buggy wouldn’t have been out of place.

Napa County is renovating Dry Creek Road. This goes beyond merely repaving the old road, which had many cracks in the asphalt. County officials decided that, given the road condition and heavy traffic, a rebuild was needed.

A rebuild is just as drastic as it sounds.

Workers tore out the pavement last week. At one point, a pilot car led traffic as only half the dirt road was open. Bikers, runners and walkers tried to avoid the dust kicked up by passing vehicles, some of which seemed to drive as fast as ever.

On Monday, a steamroller tamped down a new layer of asphalt in one lane, while the other lane remained dirt. The new Dry Creek Road was emerging.

Paving will be finished by end of the month, Lederer said. Such things as striping and some remaining chores will be done by mid-October.

While the old pavement can no longer be seen, it is still present in a sense. Lederer said the project is using Full Depth Reclamation. The old pavement is ground up and reused as material upon which the new pavement is placed.

Granite Construction Co. is doing both the Dry Creek rebuild and a similar project on Partrick Road for a total of $1.4 million.

The Dry Creek project doesn't address the pavement on Dry Creek Road beyond Orchard Avenue. It's one bumpy ride there, with cracks and potholes common. Drivers might wish the road rebuilding crew would push north for least another half-mile — and it might happen yet.

Local motorists in the coming weeks will see other Napa County road projects going on outside of the cities. Airport Boulevard in the airport industrial area is being rebuilt.

The overlay will work begin in early October on Atlas Peak Road from the William Hill Estate Winery to Westgate Drive; on Westgate Drive, Hillcrest Drive, Maui Way and Pinnacle Peak St. in Silverado; on Second Avenue in Coombsville and on Soda Canyon Road from Silverado Trail to Loma Vista Drive.

Napa County is bouncing back from the pandemic and wildfires with a planned $533 million budget.

City plans include improvements to Soscol Avenue bicycle lanes, and a resurfaced pathway near the future Stanly Ranch resort.

Napa County will be spending more money than in recent memory repairing roads outside the cities.

Overall, Napa County's pavement condition ratings are on the low side for the Bay Area.

Napa to boost payments to homeowners for sidewalk repairs

Homeowners fixing up sidewalks and driveway entrances will receive more than twice as much reimbursement from Napa after the city updated its cost-sharing program.

Plans for the Imola Avenue of your dreams are under consideration, with improvements likely to happen in stages.

To prevent arcing, lines now shut down at the first sign of interrupted power.

Dry Creek Road north of the city of Napa last weekend was a dirt road. Napa County had removed the pavement in preparation for a rebuild. Workers early this week were putting in new asphalt.

Vehicles last weekend kicked up some dust on Dry Creek Road in the rural county just north of the city of Napa. Workers had removed the pavement in preparation of rebuilding the road. They started putting down new pavement early this week.