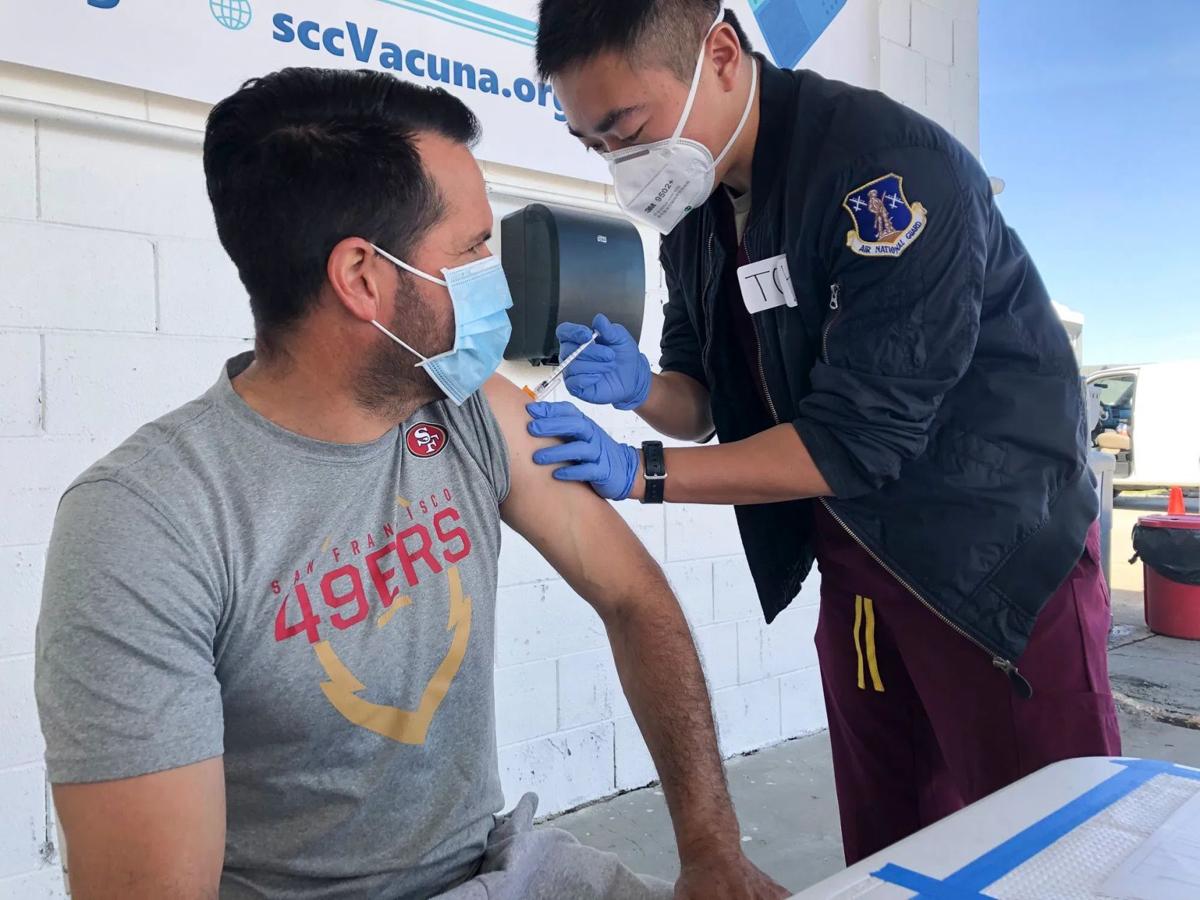 Mauricio Chavez of Hollister gets a COVID-19 vaccine at Monterey Mushrooms in Morgan Hill on Feb. 28, 2021. He works at a neighboring mushroom farm. 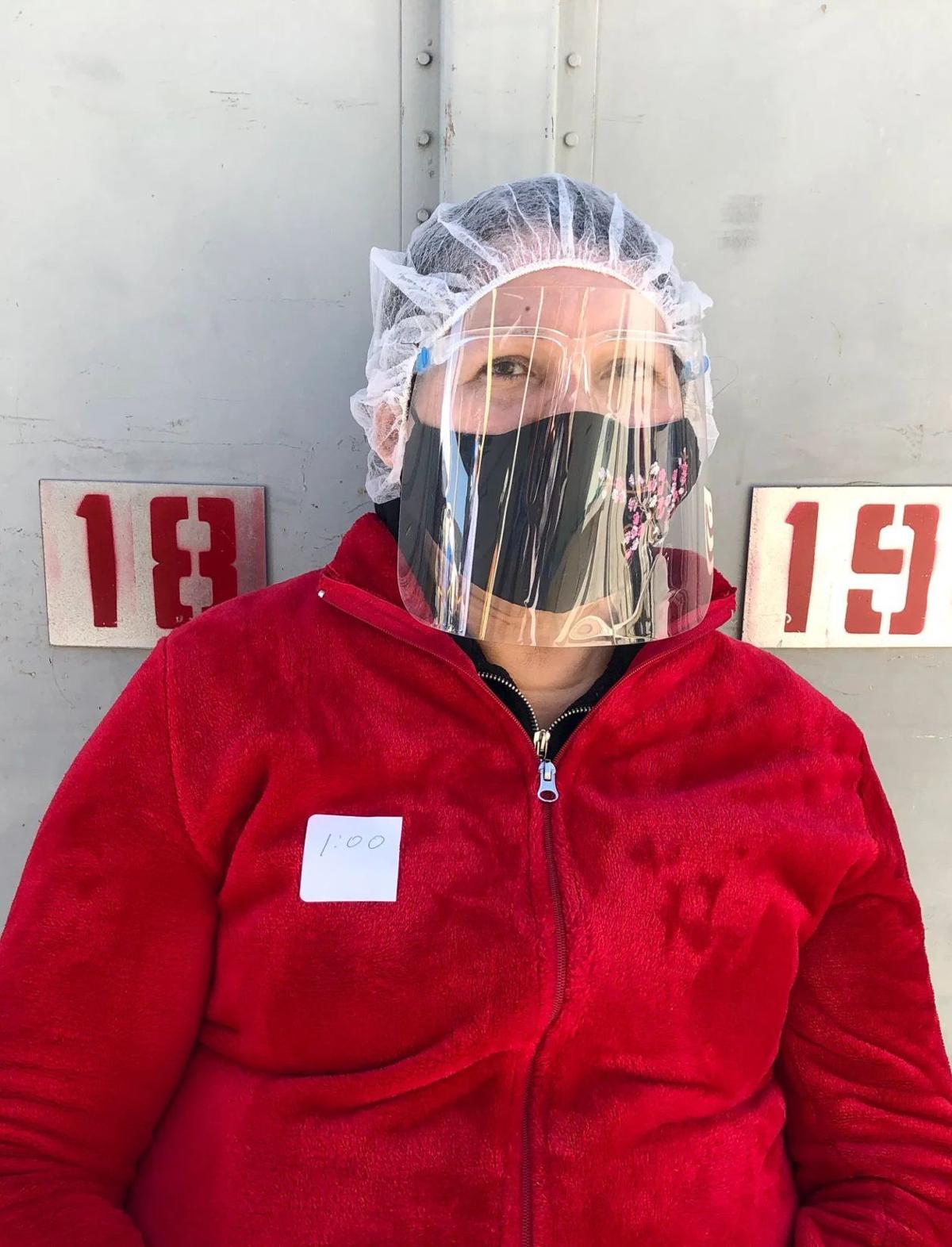 Maria Cruz of San Jose sits in the observation area after getting her COVID-19 vaccine at her job site, Monterey Mushrooms in Morgan Hill on Feb. 28, 2021.

There was a day in early December when Maria Cruz thought she might not make it.

“One morning my chest was in so much pain, I began to cry because honestly, I panicked,” she said, recalling the cough, body aches and shivers during the grueling weeks she spent with COVID-19.

So when her employer, Monterey Mushrooms in Morgan Hill, offered its employees vaccines allotted by Santa Clara County, she drowned out anything negative she’d heard about the shots and signed up.

The process was easy enough: During a Sunday shift in late February, she walked from her workstation to an outdoor vaccine line. The whole process took less than 30 minutes, including the 15 minutes she sat in observation after her shot.

California has more than half a million farmworkers — and they appear to be eager to be vaccinated. Counties only recently started offering vaccinations to this hard-hit workforce, but agricultural workers are so far accepting the vaccine at high rates.

“A big part is seeing how much growers really want it,” said Irene de Barraicua with Líderes Campesinas, a nonprofit network of women farmworkers based in Oxnard. “Some (growers) weren’t crazy about getting workers tested or bringing doctors to the fields, but vaccines are different.”

In Napa County, farmworkers have been getting vaccines primarily through OLE Health and the efforts of the St. Helena Hospital Foundation, members of the Napa Valley Farmworker Foundation say.

“We would be able to get a lot more if the supply situation were fixed” nationally, said foundation board member Mike Wolf, owner of Michael Wolf Vineyard Services.

The organizations have helped overcome vaccine hesitancy and distrust of medical institutions by allowing vineyard owners to block schedule vaccinations. That allows entire crews to go in together, and experience has shown that the farmworkers are much more likely to agree to a vaccine if they go in with coworkers and friends, foundation officials told the Napa Valley Register Editorial Board this week.

“At the beginning, there were a lot of myths” about the vaccine among workers, said board member Arnulfo Solorio, director of Silverado Farming Company. But with careful education and group support, he said, workers have become more willing.

Gov. Gavin Newsom has visited farmworker vaccine events in the Central Valley, touting the state’s commitment to the workers who feed America and promising them more vaccines.

But workplace vaccination events are still few and far between in California, so farmworkers face many obstacles getting the vaccine, advocates say. The clinics are sometimes only open to workers of certain companies, and they are reliant on how many doses a county sets aside for them.

United Farm Workers Foundation Executive Director Diana Tellefson Torres said targeting farmworkers at their worksites is the best way to make the vaccine easy for them to get. But success will take more available doses, and also more coordination and ingenuity to ensure that vaccines are where the workers are.

“We want to make sure the process is accessible. Just having something on a website isn’t going to get farmworkers somewhere because there is limited digital literacy and that limitation has been a huge barrier,” she said.

Some counties like Riverside have sent mobile clinics to agricultural worksites. Tulare County has opened its large International Agri-Center, well-known in its farming community, where growers can send their employees for vaccinations.

Farmworkers, like other essential employees, can also get vaccinated at other distribution sites, like pharmacies, but that often requires taking time off work, navigating a county or pharmacy website or the MyTurn online form and getting lucky finding an appointment.

In a nationwide United Farm Workers Foundation survey of 10,149 farmworkers — the vast majority in California — 73% said they would get the vaccine as soon as possible while only 5% said they would not. Twenty-two percent said they were neutral. That’s slightly more pro-vaccine than the 69% of all Americans who say they have been or will be vaccinated and the 30% who say they would not, according to a new Pew Research Center survey.

About 46,000 agricultural workers in California have been infected with COVID-19, according to estimates from Purdue University researchers. Their infection rates tend to run higher than the general population — 13% of farmworkers recruited for a study in the Salinas Valley tested positive for COVID-19 between July and November, compared to 5% of the general population, according to a UC Berkeley study published in December.

Like Cruz, Mauricio Chavez of Hollister got his COVID-19 shot at Monterey Mushrooms. Although he works at a different, neighboring mushroom farm, its workers were invited to the vaccine clinic.

“At work they told us this wasn’t mandatory, it was voluntary,” he said. But he didn’t think twice about it. “I haven’t seen my parents in a year, they’re 80 and 82…that’s a year we don’t get back.” Because his parents were also recently immunized, “this opens up the opportunity for me to see them again soon,” he said.

Chavez said agricultural workers may be more inclined to get the vaccine because so many have either been infected or know someone who was. He has coworkers who have fallen ill, although not necessarily at work, but likely at home because they live in crowded housing.

“You have 10 or 15 people living in one house, and all you need is one person to get infected,” he said.

About four in 10 Californians who live with an agricultural or food processing worker live in an overcrowded home — defined as having more people than rooms, according to a CalMatters analysis of Census data.

Despite some concerns about vaccine misinformation and hesitancy among farmworkers, if there is education and access, farmworkers will generally accept the vaccine, de Barraicua said.

Still, rumors and misinformation are common. Cruz said she’s heard that the vaccine is a government ploy to track them, or an attempt to make people sick and reduce the population. Cruz brushes the rumors aside but knows this type of gossip could discourage some of her peers.

Other concerns are more technical. Some workers think they can’t be vaccinated because they don’t have health insurance, even though shots are free. According to a second UFW Foundation survey of nearly 15,000 farmworkers, 78% of respondents said they did not have health insurance, and 34% had medical conditions that put them at high risk for severe illness from COVID-19.

There is also a fear about sharing any type of personal information because of their immigration status, de Barraicua said.

She said she’s attended events where some farm workers said they didn’t get any advanced notice about the vaccination events, giving them little time to ask questions and ease their doubts.

Organizations like the UFW Foundation and Lideres Campesinas have been working with health officials across the state to provide vaccine education to workers in the fields.

Most of the worksite vaccination clinics are a partnership between a county and employers. Tulare County Supervisor Pete Vander Poel said he is concerned that switching to the new vaccine distribution system, led by Blue Shield, could limit how many of these events counties can schedule.

Tulare County recently started receiving double the doses of previous weeks, increasing from 3,800 doses a week to 7,600 doses per week.

But that’s for all eligible residents. “And we have about 42,000 [agricultural] employees ready to be vaccinated,” Vander Poel said. “So that shows you the magnitude we’re dealing with.”

CalMatters is a public interest journalism venture committed to explaining how California’s Capitol works and why it matters. Napa Valley Register Editor Sean Scully contributed to this report.

How California’s recall rules could spell trouble for Gavin Newsom

In a recall election, Gov. Newsom could get more votes than his replacement — and still lose his job.

Kaiser Permanente has been cited more than any other California health system for violations of worker safety during the pandemic.

What began as a far-fetched effort by Republican activists has turned into a credible campaign attempting to throw Newsom out of office. Here's what's going on.

How remote work revolution is impacting housing in Napa and statewide

A huge number of people have been working from home for the better part of the year, which is having an impact on Napa's housing market.

Napa Valley caterers have been clobbered by COVID restrictions

Napa Valley's catering businesses were booming. Then the pandemic hit. One local caterer, a 40-year industry veteran, says she's lost 95% of her revenue.

Employers are asked to sign up with the Farm Bureau if they have unvaccinated agricultural workers.

For the seventh day in a row, no new deaths, the county reported.

People going to the first two clinics will get the newly approved Johnson & Johnson vaccine that requires only a single dose.

COVID-19 pandemic is speeding up rush to automate some jobs

Economists say small property owners have been uniquely pinched by the pandemic as renters move out or stop paying. Despite a federally mandated mortgage forbearance and $2.6 billion in rental relief from the state, some landlords who slip through the cracks wonder how much longer they can absorb the costs.

Many parents report that their special-needs students have gone backward in development during the pandemic-isolating past year.

Here’s why your electricity prices are high and soaring

Looking for a job? Retail jobs are on the rise in Napa County.

Premature or precautionary? California is first to tackle microplastics in drinking water

Huge gaps exist in scientific knowledge, but California is about to set the world’s first health guidelines for microplastics in drinking water. Yet no one agrees how to test water for the tiny bits of plastic, or how dangerous they are.

Have you seen a doctor lately? Delays likely to trigger deaths, poor health

Other than COVID-19, Californians are still dying at about the same rates from heart disease, cancer and other disorders. But doctors fear the year-long delays in medical care could lead to early deaths and severe health problems.

Mauricio Chavez of Hollister gets a COVID-19 vaccine at Monterey Mushrooms in Morgan Hill on Feb. 28, 2021. He works at a neighboring mushroom farm.

Maria Cruz of San Jose sits in the observation area after getting her COVID-19 vaccine at her job site, Monterey Mushrooms in Morgan Hill on Feb. 28, 2021.