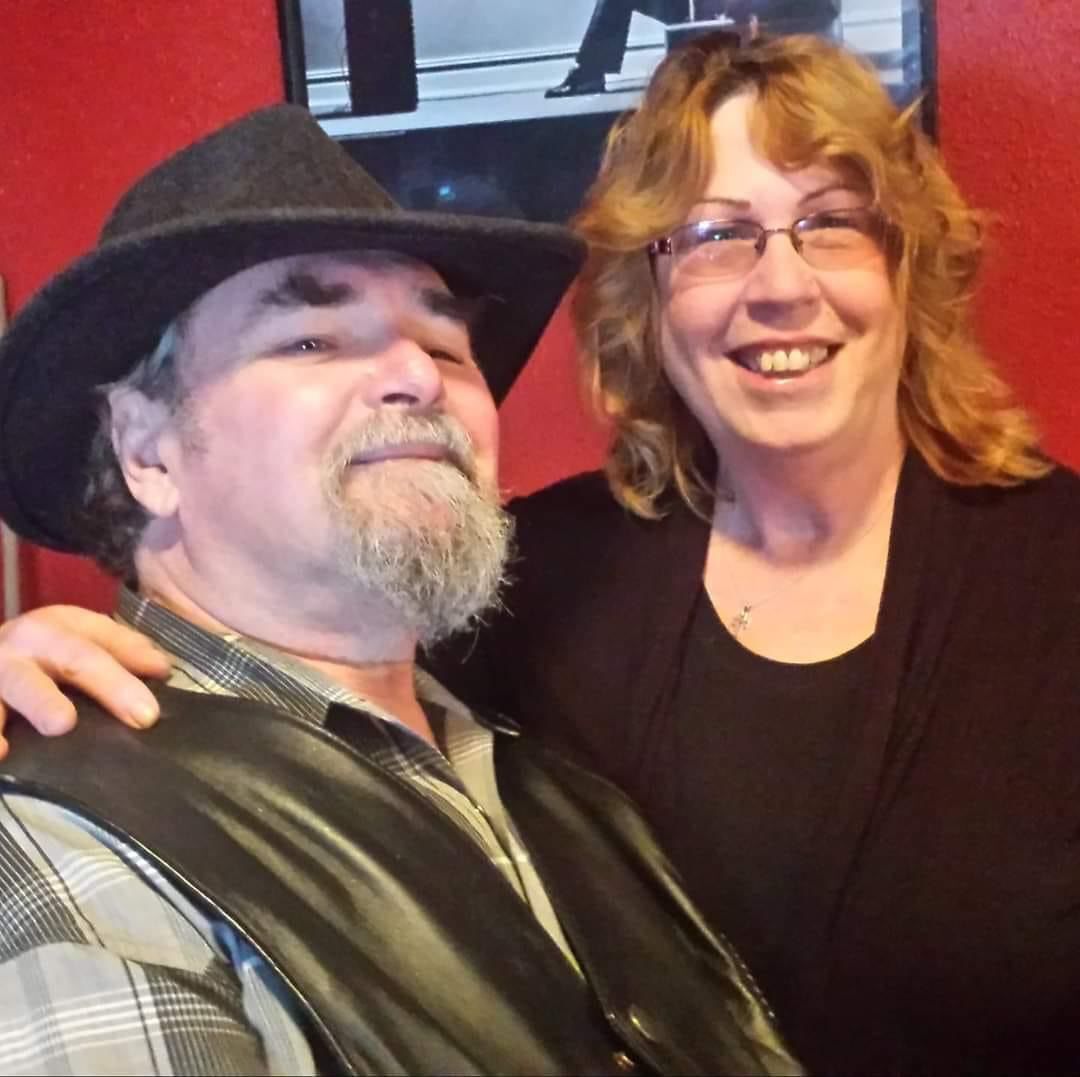 Leo McDermott with girlfriend Mary Hintemeyer. Hintemeyer, who served as one of McDermott's caretakers, was caught with McDermott and his son Tom in extreme fire behavior Tuesday night. The three ultimately lost their lives in the LNU Complex fires. 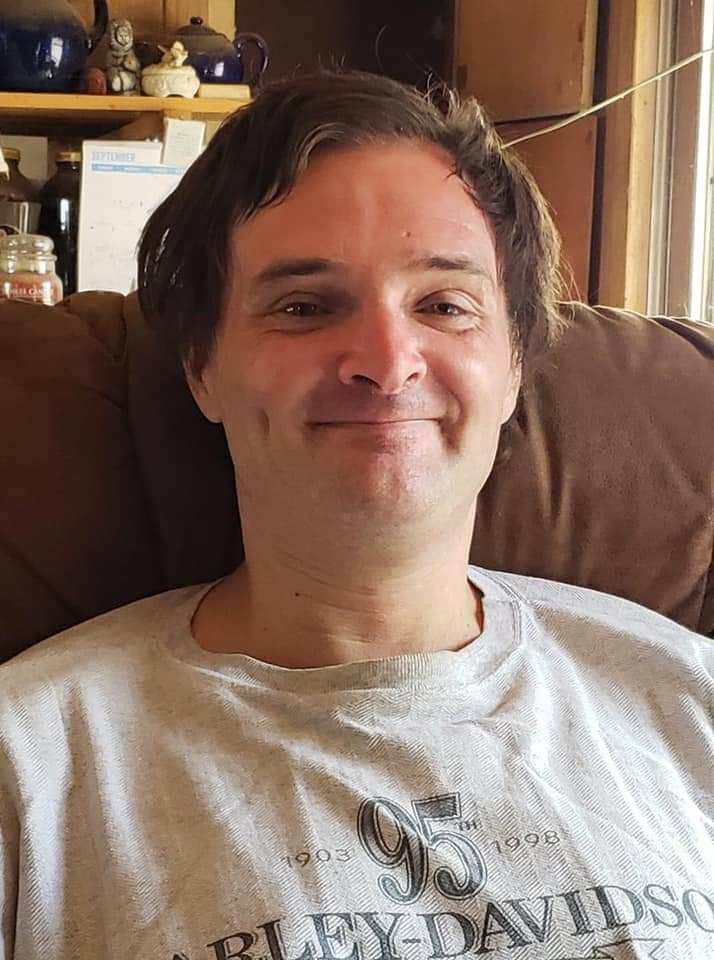 Tom McDermott had recently reconciled with his father, Leo, and was helping Hintemeyer take care of McDermott, whose autoimmune disease left him largely wheelchair-bound. 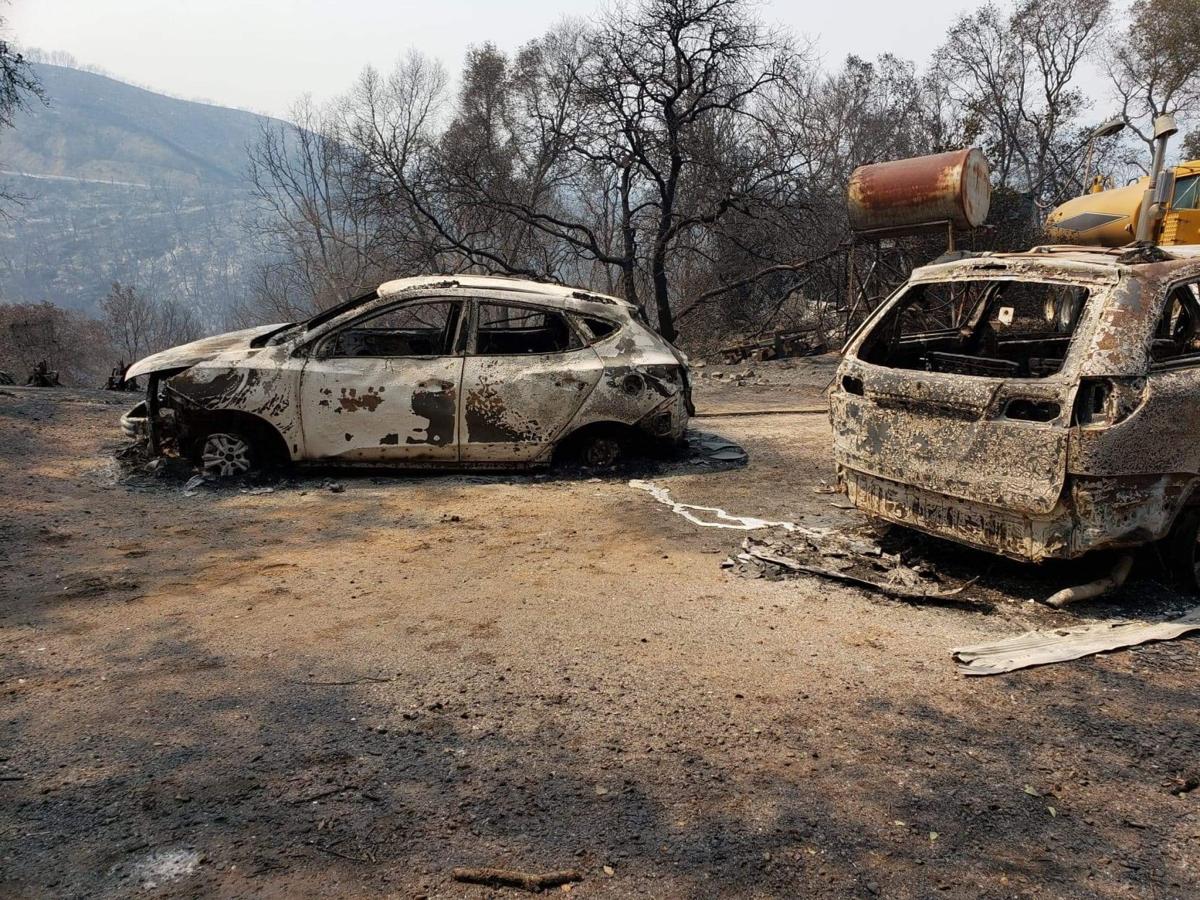 These are two cars on McDermott's property that were incinerated by the blaze.

Hintemeyer and McDermott had been dating for the past five years, Hintemeyer’s son Rob McNeal, 53, said. His mother was by nature someone who looked after others: first her father in his old age, a younger brother who suffered from emphysema and then McDermott, who a couple of years into their relationship was diagnosed with an autoimmune disease that attacked his muscles and left him largely wheelchair bound.

The two met at a bar during Hintemeyer’s niece’s 21st birthday, McNeal said. His mother moved to the property where McDermott had lived for more than 40 years, just off Highway 128, about a year after they began dating.

“I’m a little biased, but she was pretty awesome,” McNeal said of his mother. Of her natural inclination to care for others – “that’s just who she was,” he added.

But his mother did sometimes struggle as sole caregiver, according to McNeal, and a few years ago began “really praying” for some help. McNeal tried to convince the two to move closer to his family in Winters, a 15-minute drive away in Yolo County, but with little success. And then McDermott’s son, Tom, who’d been estranged from his father since his late teenage years, showed up unexpectedly.

“Ever since then, she’d had someone to help out up there,” McNeal said, adding that with Hintemeyer’s help the father-son reconciled their differences and began anew their relationship. The three lived in two mobile homes on one of the two more than 20-acre properties owned by McDermott, just three miles from Markley Cove.

McNeal and Hintemeyer – whom he called “his best friend”—spoke every day, sometimes multiple times a day. They were only 17 years apart, he added, and related to much of the same stuff.

When fire conditions worsened Tuesday, McNeal reached Hintemeyer by cellphone – a miracle, he says, considering the already-spotty cell service up near Markley Cove where she, McDermott and Tom lived.

“I got through to her, and we talked for 15 minutes,” he said. “She sent me a picture of the fire coming over the canyon, and she knew they were going to have to get out of there. But at the time they were OK.”

“Keep in touch,” McNeal wrote to his mother after receiving the photo of the flames. He asked if she’d been able to alert the fire department of their exact position; she said no, that cell service had been lost.

It was that conversation, McNeal said, that may have prompted Hintemeyer to reassess their collective safety at the property. She would have spotted fire unexpectedly encroaching on the property not from Markley Canyon to their north east, but from the hills to their west, McNeal thinks. The last message he received from his mother came through at 9:14 p.m. Tuesday.

McNeal wasn’t immediately worried, he said: McDermott, “a mountain guy,” had a smart head on his shoulders, and had outfitted the property with a comprehensive sprinkler system and a 55,000-gallon water truck as well as a fire shelter – a bunker with walls four feet thick, reinforced with steel plates and insulated with fiberglass support.

“He believed he was completely prepared,” McNeal said of McDermott.

He tried himself to get to McDermott’s property at about 11 p.m. Tuesday, but was stopped by a roadblock. Shortly thereafter he realized the fire – which he watched roll down mountains in the Berryessa area – was headed straight toward the home of a friend. He spent the night helping protect that house, but had a lingering feeling something was wrong.

“I was out until 3 a.m. at my friend’s property, but I was worried when I got back,” he said. McNeal knows now that if he had managed to make it to McDermott’s property that night, there’s a good chance he, too, would have been trapped by the fire.

He tried Wednesday morning to reach the property: he was stopped once more, this time near Markley Cove.

That night, the police called McNeal. They’d reached McDermott’s property: the water truck was still running. McDermott’s van, which could accommodate his wheel chair, appeared to have been staged – it was ready to leave the property. But the land had been “completely devastated” by fire, police told him, and asked that he not come to the residence until after noon on Thursday. They were continuing to search for his mother, McDermott and his son.

McNeal learned later they’d discovered the bodies that night. Extreme fire behavior had caused the van and the sprinklers to fail, set the mobile homes ablaze and blistered cars parked 30 feet from the fire shelter. Bumpers melted clean off their frames.

“It was pretty much the worst set of circumstances that all worked together,” McNeal said.

The Napa County Sheriff’s Office as of Monday afternoon had not confirmed the identities of the three victims. The Hennessey Fire also claimed two civilian casualties in Solano County.

McNeal and his family are grappling with their loss; between himself and his two sisters, Hintemeyer has something like 23 grandchildren and great-grandchildren. McNeal’s girlfriend of 20 years, Shannon, has set up a Facebook fundraiser to help raise money for the three funerals and the debris-clearing the family now must do of McDermott’s property. (McDermott was a car collector, according to McNeal: strewn around the property are more than 20 vehicles, some previously in working shape and others not.)

McNeal has been pleasantly surprised by waves of residents getting in touch to talk about their memories of Hintemeyer. That support – as well as the donations to the Facebook fundraiser, through which the family hopes to cover some of their cost – is greatly appreciated, McNeal said.

But still – it’s been a tough loss to bear. Speaking to residents, McNeal urged caution and preemptive action in the wake of evacuations.

“I just want people to remember that property is replaceable,” he said. ““This feeling – I’m pretty sure I’ll never get over it. There are moments when I wish all of this wasn’t real.”

Officials are working to identify the deceased and notify next of kin, Sheriffs Office spokesperson Henry Wofford said.

So far this year, firefighters have responded to 7,002 fires that have scorched a combined 1.4 million acres.

In sending a precautionary emergency alert, officials discovered the system, used by municipalities nationwide, had been rendered useless by a coding error.

Five New York Cities. That's how much land wildfires have burned in California

Tens of thousands of firefighters across California are battling more than 585 fires, many ignited by lightning, the state Department of Forestry and Fire Protection says.

Gov. Newsom speaks at Cal Fire base camp in Calistoga

The Hennessey Fire has reached the historic Nichelini property in Pope Valley, but as of Tuesday afternoon the house and winery have been spared.

Eight people have been arrested on suspicion of looting or planning to loot neighborhoods in Santa Cruz County, Sheriff Jim Hart said Sunday.

Declined credit card leads to 2 arrests at a Napa hotel

Police said they found stolen mail and other materials in their room.

The Hennessey Fire was 56% contained Sunday morning, nearly two weeks after lightning triggered the blaze in rural Napa County, according to Cal Fire.

Losses in the fires of October 2017 were nearly three times greater.

Leo McDermott with girlfriend Mary Hintemeyer. Hintemeyer, who served as one of McDermott's caretakers, was caught with McDermott and his son Tom in extreme fire behavior Tuesday night. The three ultimately lost their lives in the LNU Complex fires.

Tom McDermott had recently reconciled with his father, Leo, and was helping Hintemeyer take care of McDermott, whose autoimmune disease left him largely wheelchair-bound.

These are two cars on McDermott's property that were incinerated by the blaze.