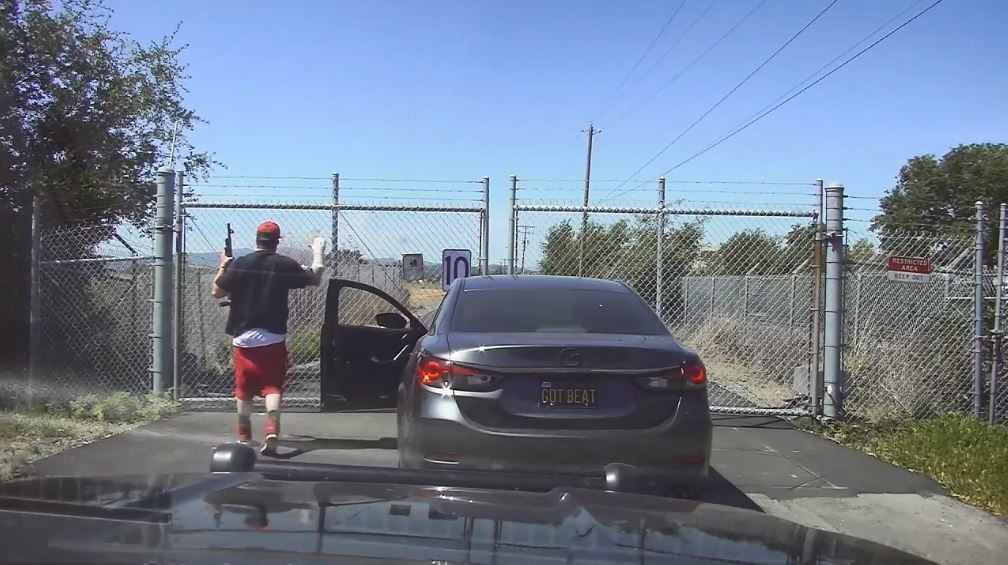 Brandan Nylander is pictured in a screen shot from a dashboard-mounted video camera, holding a loaded shotgun while putting his hands up moments before he was shot and killed by Napa County Sheriff's Deputy Gregg Lee on April 24, 2020. A lawyer for Nylander's grandmother, aunt and uncle, who have filed suit against the county in federal court, says it was clear from Nylander's actions that he intended to surrender. 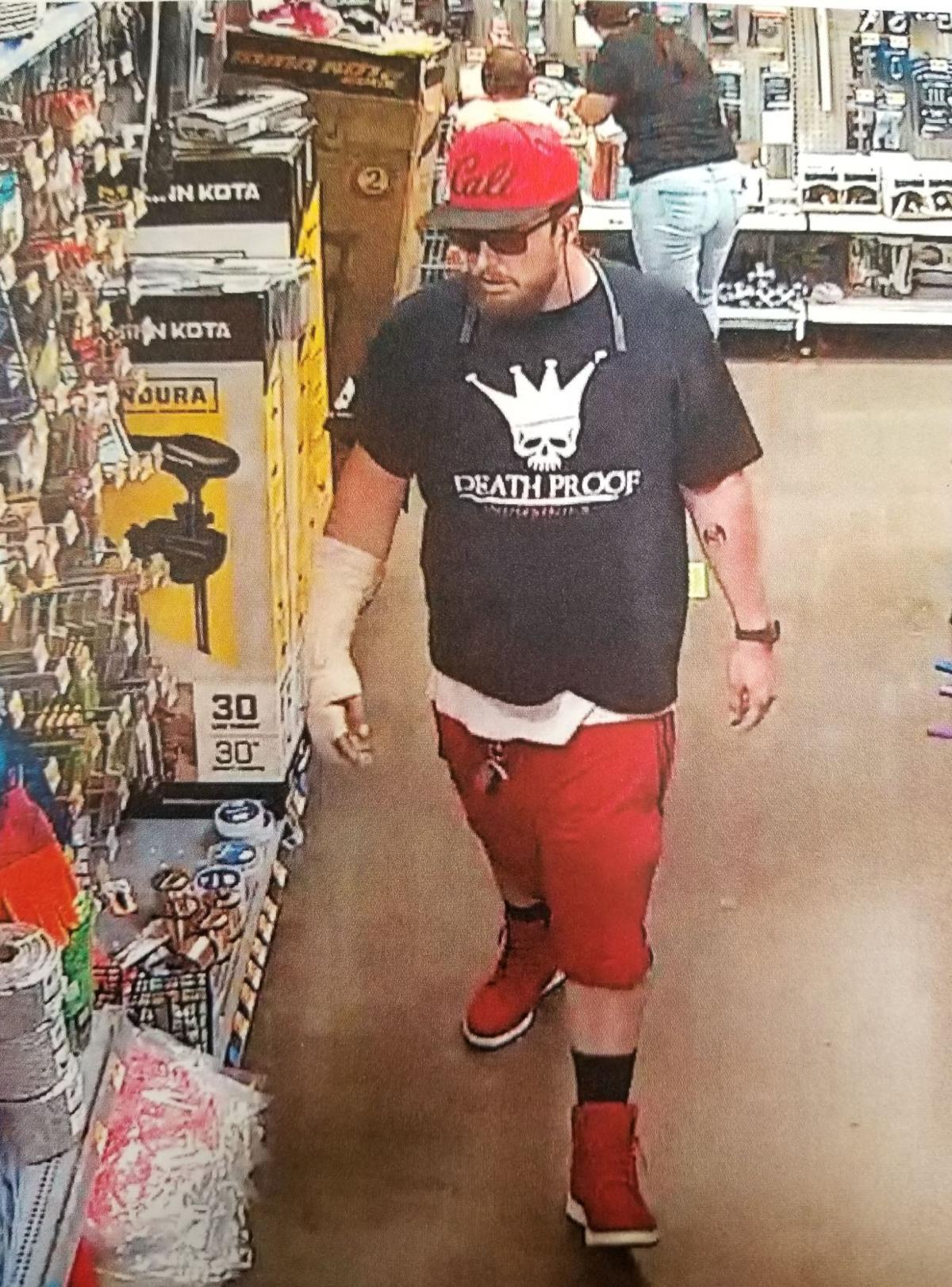 Brandan Nylander, 24, of Napa is shown on security camera footage taken inside the Napa Walmart on April 24, 2020. Investigators say he stole ammunition and fled and later was fatally shot by a sheriff's deputy outside the Napa County Airport, an action that has prompted a federal lawsuit filed by three of his relatives.

Napa County, and the sheriff’s deputy who fatally shot Brandan Nylander last April after a vehicle pursuit, face a federal lawsuit from Nylander’s relatives alleging the use of “excessive and unreasonable” force in the 24-year-old Napan’s death.

The shooting on the afternoon of April 24, 2020, followed an incident in which Nylander allegedly stole ammunition at the Napa Walmart and assaulted an employee before fleeing, according to the Napa County Sheriff’s Office. A nearly three-minute chase ensued, during which video from a patrol vehicle’s camera showed Nylander driving down southbound Highway 29 and then Airport Road before ending up at a closed gate blocking an access road near Napa County Airport, where he was shot and killed by Lee after emerging from his car.

Repeating allegations made in an initial complaint in August, Joseph A. Welch, a Sacramento attorney representing Nylander’s relatives, argued that Nylander posed no threat to Lee or other sheriff’s deputies who pursued him, and was killed while raising his arms, turning his back and trying to comply with Lee’s commands.

“The conduct of Defendants was malicious, wanton, oppressive, and accomplished with a conscious disregard for the constitutional rights of Plaintiffs and (Nylander),” Welch said in the 17-page filing.

Welch in November had announced the family’s intention to sue Napa County over the shooting. After the county in October turned down Johansen’s initial claim, the plaintiffs had six months — until April — to file suit, he said at the time.

Janet Upton, Napa County’s public information officer, said the county has a policy of not commenting on pending litigation.

At a news conference in May less than two weeks after the shooting, Sheriff John Robertson shared a silent two-minute and 19-second video clip captured from Lee’s patrol vehicle and said Nylander pointed a loaded shotgun at Lee and other deputy who pulled up to the scene on a motorcycle.

“Had I been in the same situation on the same timeline, I would have taken the exact same action as Deputy Lee had taken,” Robertson said at the time. “... Mr. Nylander, by his own action, was a threat to the deputies.”

In December, Napa County District Attorney Allison Haley announced Lee would not face charges in connection with Nylander’s death. The deputy’s use of deadly force “was a reasonable and lawful response under the totality of the circumstances,” Haley’s office said in a statement.

Video footage showed Nylander opening the driver door of his Mazda sedan and exiting, raising his hands but holding what authorities said was a loaded shotgun in the left hand. Seconds after leaving the car, he was hit by two gunshots fired by Lee, one in the buttocks and one in the neck, and died at the scene.

Nylander, who had a cast on his right hand, swept the muzzle of his shotgun from a downward position to a straight-up vertical position in less than a second, and never pointed the muzzle directly at the sheriff’s deputy, according to the filing in federal court. He stepped out of his car raising both arms in the air and turning his back to Lee, the complaint states.

The family’s complaint alleges that Deputy Lee, pulling up his patrol car behind Nylander’s Mazda, exited his own vehicle, positioned himself behind the open door and immediately began firing his pistol, causing Nylander to fall to the ground seven seconds after opening his car door.

Lee “could not remember putting his vehicle in park, removing his seatbelt, opening his door, or even hearing his own gunfire,” the suit alleges. “He remembered instinctively yelling something similar to ‘no’ or ‘stop.’ He did not recall giving (Nylander) any other commands. He did not remember thinking about being fearful for anyone but himself.”

Lee fired two rounds less than 20 feet from Nylander that missed, but a third struck Nylander in the backside and a fourth in the spine, killing him, according to the lawsuit. Both bullets that struck Nylander traveled from back to front, indicating his arms were up and his back turned to the deputy when he was hit, the filing asserts.

The suit states that Lee “reassessed” after the first two errant shots and fired the next two rounds because he did not see Nylander react to the initial gunfire, even though a dashboard-mounted camera “clearly illustrates (Nylander) immediately raised his arms and turned his back in an attempt to surrender to Defendant Lee in response to the first two rounds fired.”

In declining to pursue charges against Deputy Lee, District Attorney Haley disputed the notion that Nylander was about to surrender to authorities or was behaving in a non-threatening way. When Nylander held the firearm one-handed like a stick and moved away from the deputy, the officer apparently interpreted it as an attempt to seek cover and feared for his life, according to Haley’s December statement.

Napa Police has said that earlier on the day of the shooting, Nylander entered the Lincoln Avenue Walmart and used a hammer to break open a display case. After grabbing a box of shotgun ammunition, he threw the hammer at a store employee before fleeing the store, according to the department.

The district attorney’s report also stated Nylander was suffering from depression, had suicidal thoughts, left a suicide note in his home, and was intoxicated at the time of the shooting.

Sarena Nylander, who identified herself as Nylander’s aunt, said in a Facebook post after the shooting that her nephew was “the sweetest person on the planet” and a good-hearted cousin to her three young daughters — but also that he had struggled with his mental health, and that she believed he intended to take his own life.

“That’s all there is to it,” Sarena wrote in a separate comment. “It’s absolutely horrible and sad. He wouldn’t hurt a fly. Just himself.”

The family’s original August claim described Johansen, a Stanislaus County resident, as “very active” in the raising of her grandson, whose mother died in 2012 when Brandan was 16. His father’s identity is unknown, according to the complaint.

Raised in Placer County east of Sacramento, Nylander had moved to Napa to stay with relatives and pursue a career as an electrician, according to his family’s August claim. His grandmother and uncle became his legal guardians after the death of his mother, according to Placer County court records.

A LinkedIn profile for Nylander indicated he studied at Sierra College in Rocklin before holding jobs in a grocery and a manufacturer elsewhere in Placer County. His scanty legal record consisted of a few speeding tickets and a property-offense misdemeanor that was later dismissed, with no offenses listed in Napa County.

WATCH NOW: HOW TO PREVENT THEFT FROM YOUR VEHICLE

Photos of the month: A look at Napa Valley news in pictures, February 2021

FEB. 17: City of Napa police responded to a report of a stolen vehicle at the 7-Eleven store at Silverado Trail and Clark Street. The victim l…

FEB. 26: American Canyon police took a report of a catalytic converter theft on Klamath Court, then located surveillance camera footage of the…

FEB. 22: Two catalytic converter theft suspects were behind bars after a north Napa car owner interrupted thieves caught in the act of removin…

FEB. 18: A man driving a stolen vehicle fled from Napa County Sheriff’s officers, lost control and drove into a city of Napa house.

Napa Police were called to Raley's supermarket on Soscol Avenue where staff had detained a man suspected of stealing alcohol.

A driver and her passenger were arrested on weapon allegations after a traffic stop for a Vehicle Code violation, Napa Police said.

A former employee at Wendy's restaurant on Trancas Street was arrested after a customer discovered a video camera in a bathroom stall.

Napa police received multiple reports of a man destroying property as he walked through the central city.

Biden: This is the decisive decade on climate

Biden: This is the decisive decade on climate

If this state is the nation’s laboratory for progressive laws, why has it been unable to keep the police from policing themselves?

A woman died after a vehicle ran over her Tuesday night in a crash that may have been intentional.

Police said the suspect took vehicle keys from businesses when no one was looking.

Such scams happen more frequently than the public realizes, according to the sheriff's office, which encourages anyone who receives such a call to contact their local law enforcement agency for help.

Brandan Nylander is pictured in a screen shot from a dashboard-mounted video camera, holding a loaded shotgun while putting his hands up moments before he was shot and killed by Napa County Sheriff's Deputy Gregg Lee on April 24, 2020. A lawyer for Nylander's grandmother, aunt and uncle, who have filed suit against the county in federal court, says it was clear from Nylander's actions that he intended to surrender.

Brandan Nylander, 24, of Napa is shown on security camera footage taken inside the Napa Walmart on April 24, 2020. Investigators say he stole ammunition and fled and later was fatally shot by a sheriff's deputy outside the Napa County Airport, an action that has prompted a federal lawsuit filed by three of his relatives.