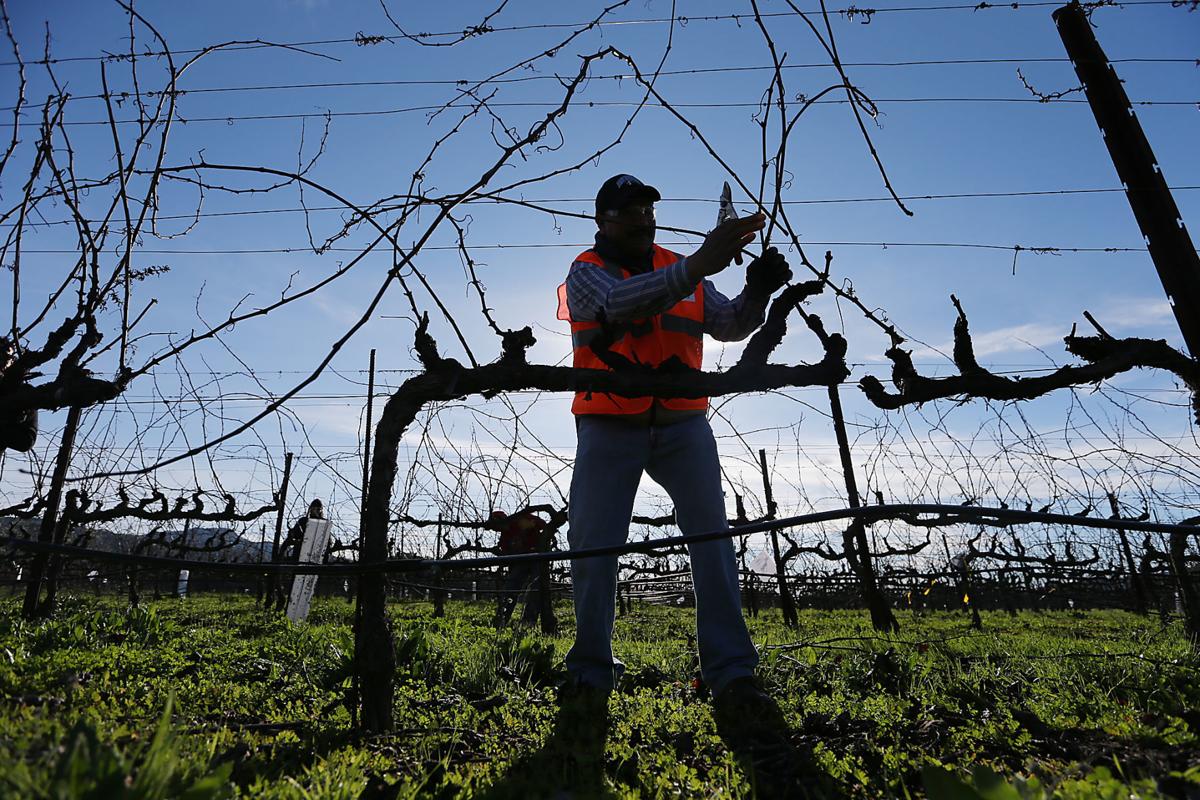 A Napa farmworker prunes vineyards in Yountville in 2016. 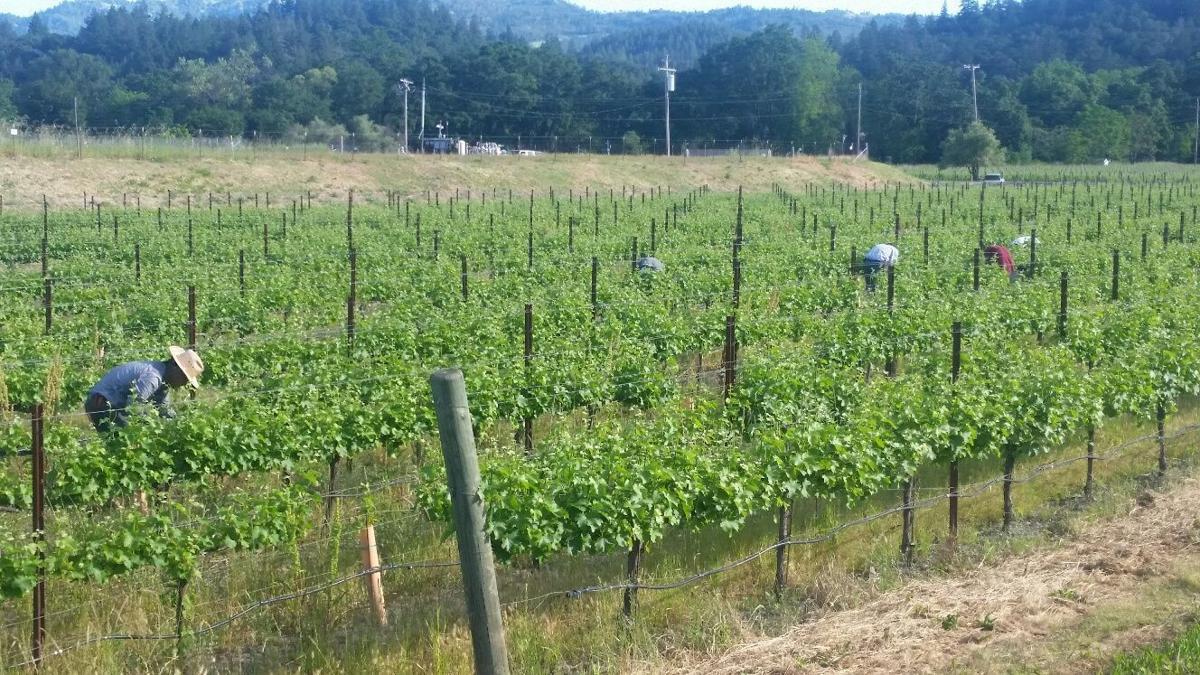 Farmworkers tend to the Girard vineyard on Highway 29.

Call it ironic that farmworkers in the fertile Napa Valley region, who produced winegrapes and crops valued at more than $1 billion in 2018, may have limited access to healthy food.

The expense of produce in the more rural, northern end of Napa County is part of the reason that so many farmworkers visiting OLE Health clinics in the area struggle with obesity, high blood pressure and diabetes, said Dr. Gabriela Bermudez, the medical director of OLE Health’s Calistoga and St. Helena clinics. High local housing costs, a lack of disposable income and seasonal work means some patients struggle to afford necessities such as doctor visits.

Those problems can compound for farmworkers who entered the country illegally and take a risk in returning to their home country during the agricultural off-season.

Nearly one in 10 patients served by OLE Health in the past fiscal year were farmworkers or their family members. Many report pain in the lower back, joints and knees.

“That’s just kind of the nature of the work they’re doing,” she said.

Farmworkers may lack sick leave, struggle to find transportation, be confused about America’s system, or face a language barrier. There aren’t always adequate translation services available for Spanish-speakers, but the problem is especially bad for farmworkers from indigenous communities in Mexico or Guatemala, who may speak Spanish as a second language.

Some may not be able to afford a clinic visit, Guild said. Forty-seven percent of farmworkers have insurance, according to the National Agricultural Workers Survey conducted in 2015 and 2016. Insurance rates were lower among unauthorized and migrant workers, 24 percent and 34 percent of whom were insured, respectively.

“(Farmworkers) have to decide between lost wages and possibly losing their job, and going to the doctor,” Guild said.

Farmworkers’ access to health care was more limited, too. Researchers found that 30 percent of farmworkers had American health insurance, compared to 86 percent of all county residents.

Now the second-largest health care provider in the county behind Kaiser Permanente, OLE Health started small. The organization’s founders started the first clinic in 1972 to serve Napa County farmworkers. OLE Health’s founders said at the time that the language barrier was a major hurdle for Spanish speakers when it came to accessing resources.

“We began with a lot of hard work, commitment and a lot of love, amor,” co-founder Aurelio Hurtado told the Register earlier this year. “We created something that was needed in the community.”

Three in four farmworkers say they were born outside of the U.S., and immigrants — especially those who entered the country illegally — can have a difficult time accessing health care in America.

A patient’s ability to access medications can depend on whether they have insurance and entered the country legally, Bermudez said. Undocumented patients can still get emergency medical coverage and can purchase lower-cost medications from OLE Health.

Undocumented immigrants may qualify for other services such as birth control, cervical cancer screening, mammograms and tests for sexually transmitted diseases through a family planning program, she said.

While Bermudez cited diabetes, high blood pressure and obesity among the top concerns that local farmworkers face, the prevalence of these ailments among farmworkers is not unique to Napa County, where the National Center for Farmworker Health estimates nearly 1,700 farmworkers lived in 2012. Those were the most common diagnoses among the 833 farmworkers who received services through the U.S. Department of Health and Human Services health center program in 2015, according to NCFH.

With limited resources, some go as far as Napa or Santa Rosa to visit cheaper supermarkets, Bermudez said.

Managing diabetes, high blood pressure and obesity can be a challenge, Guild said. They may not have a refrigerator to store insulin in, for example. Patients may share a kitchen with multiple roommates or lack a kitchen altogether, making it difficult to store and prepare healthy meals.

While Hispanic and Latino Americans — who comprise four in five U.S. farmworkers — are more prone to diabetes, farmworkers seem to have especially high rates of the disease. Six percent of Hispanics nationally had diabetes in 2011, compared to nearly 8 percent of agricultural worker patients in 2012, according to an NCFH fact sheet on diabetes. It’s possible the 8 percent figure could be underestimated, NCFH said.

Stress can also play a role in diabetes. Food insecurity, wage theft, migration challenges and labor rights abuses can cause stress for farmworkers, according to NCFH.

Farmworkers have difficult jobs that often involve the use of hazardous materials, such as pesticides, and machinery that can be deadly, should an accident occur.

Crop production workers had one of the highest fatal occupational injury counts in 2017 at 21 deaths per 100,000 employees, according to the most recent U.S. Bureau of Labor Statistics Link_azujxxywreport.

The most recent reported farmworker death in Napa County was that of Leon Marcelo Lua, 49, an employee of De Coninck Vineyards in American Canyon. He was killed in October 2018 after he tried to unclog a grape harvester by reaching into a rotating shaft. His sweatshirt got caught and he died when he was pulled into the machine.

When it comes to pesticides, there are regulations to protect farmworkers, but they can still be exposed. Pesticide residue may be left behind on plants. Workers may accidentally take residue home and be exposed there, too, Guild said.

Pesticide exposure is under-reported because symptoms — such as rash, nausea or headache — can easily be misdiagnosed, Guild said. Clinicians seeing farmworkers must know that their patients work in agriculture and know the right questions to ask.

Agricultural work is extremely labor-intensive and can wear on the body, Guild said.

An NCFH report on occupational hazards said farmworkers are especially prone to such injuries due to nonstop bending, twisting, carrying heavy things and performing repetitive motions during long hours on the job. Farmworkers may also fall ill due to increased sun exposure and respiratory illnesses due to exposure to dusts or other irritants.

“It’s a highly skilled job … to be able to efficiently work in the fields and make enough money to be successful as a farmworker,” she said.

Courtney Teague reported this story as part of her University of Southern California Annenberg Center for Health Journalism 2019 California Fellowship.

Winery websites at the heart of lawsuits over ADA compliance online

Because of a rash of lawsuits, wineries now have to ask if their websites are ADA compliant.