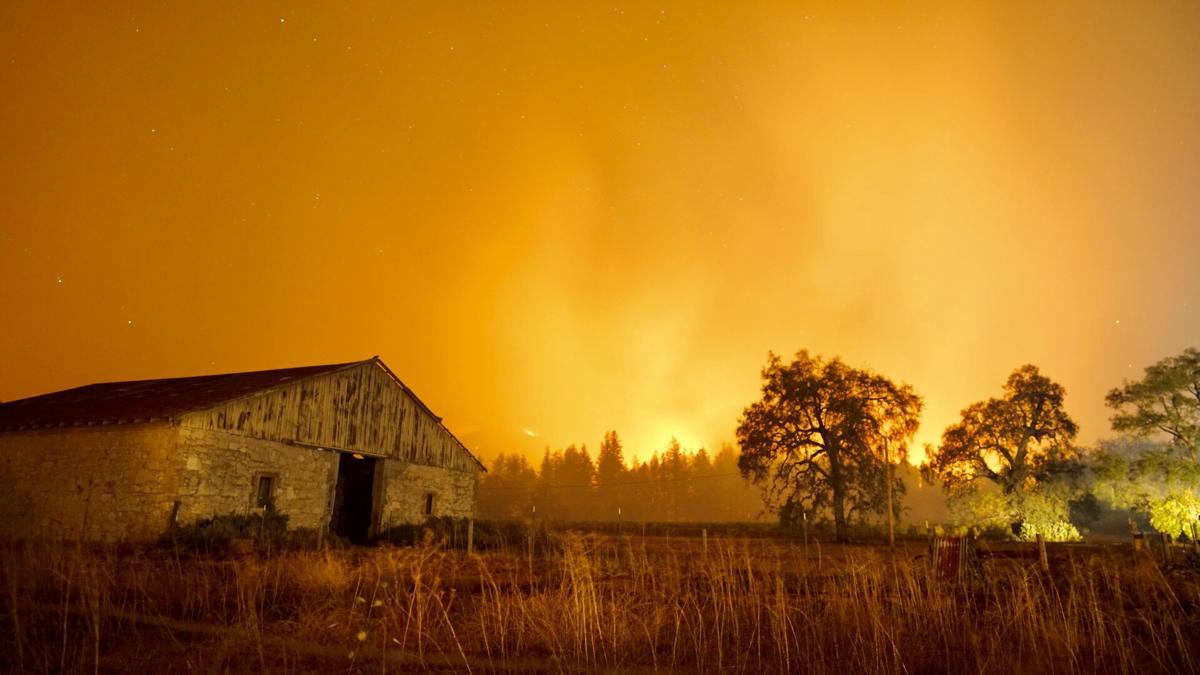 Flames from the Kincade fire light up the horizon in Knights Valley outside Calistoga Sunday evening.

Four strike teams of 21 persons each converged on the Napa County Fairgrounds Monday morning to review plans to keep the Kincade from away from Calistoga. Units from Glendale, Acadia and Alhambra were among those sent to Calistoga. 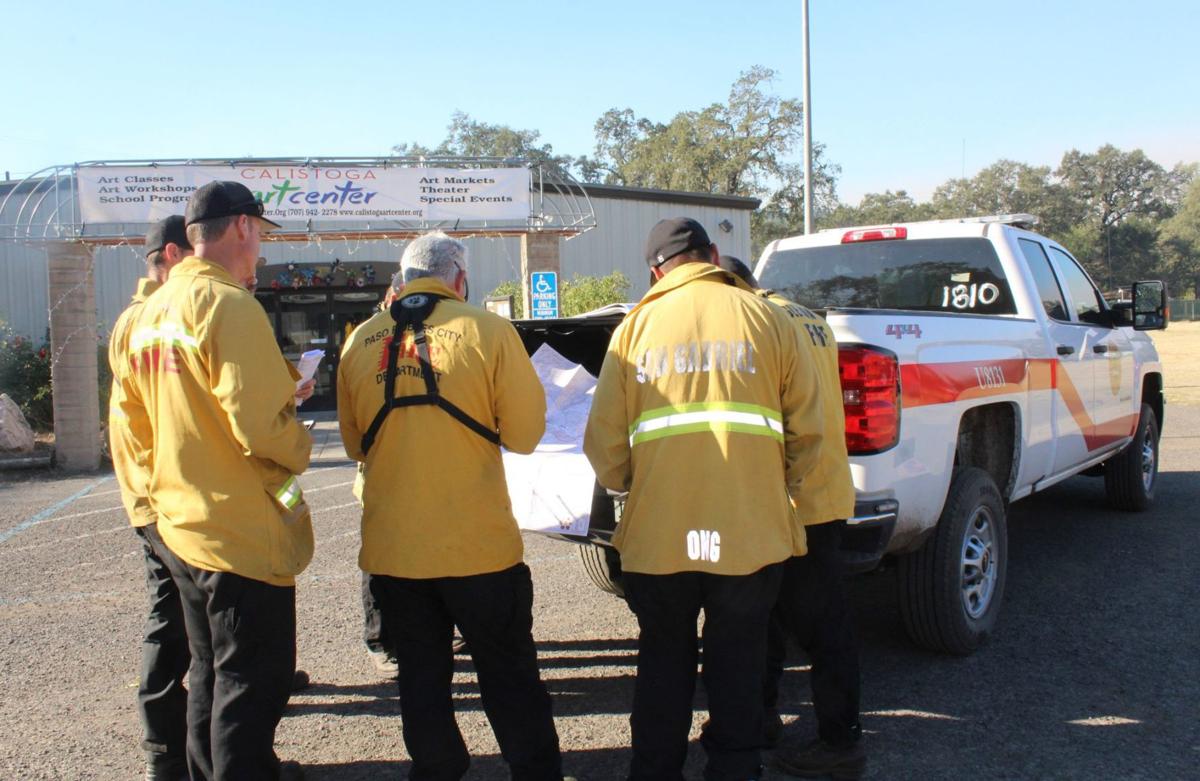 Strike teams gathered at the Napa County Fairgrounds Monday morning to plan for the defense of Calistoga from the Kincade fire in Sonoma County.

Updated at 8:18 p.m. — Monday was a day of mixed emotions for Napa County’s Pacific Gas and Electric customers.

The 18,000 households that had their power deliberately cut off Saturday could see a return to normalcy just around the corner. The utility had restored service to 12 percent of customers by 3:30 p.m. Monday, according to PG&E spokesperson Megan McFarland.

At the same time, PG&E warned customers across the Napa Valley and the wider Bay Area to brace for another round of shutoffs starting Tuesday morning in preparation for another windstorm that would increase the danger of wildfires.

In the North Bay, the latest planned shutdowns will begin at 7 a.m. and affect some 14,900 customers, the Napa County Office of Emergency Services announced in a Nixle alert late Monday. Restoration is expected to begin at about 8 a.m. Wednesday.

For residents of the Calistoga area, Monday was another day of waiting to see whether Sonoma County’s roaring Kincade Fire would make a charge in their direction if the winds changed.

The county issued an an evacuation advisory Sunday afternoon, telling residents to prepare to leave if circumstance on the Sonoma border were to change for the worse.

Cal Fire is working to control the perimeter of the Kincade Fire near Mount St. Helena, the agency’s incident commander Mike Blankenheim said during a 9 a.m. news conference Monday. The move comes as stiff Sunday winds feeding the wildfire have abated, giving firefighters a brief window to hem in the flames before the expected return of powerful gusts starting Tuesday. A National Weather Service red-flag warning for dangerously windy and dry conditions will be in effect from 8 a.m. Tuesday to 4 p.m. Wednesday.

“We’ll have a quiet 24 hours and then we’ll enter another critical period, Tuesday night into Wednesday,” Ryan Walburn, a forecaster with the National Weather Service’s Monterey bureau, said during the news conference.

By Monday night, the Kincade Fire had swelled to 74,324 acres – more than 116 square miles – and forced mandatory clear-outs for 185,000 people in Sonoma County, including parts of Santa Rosa. The blaze, which began Wednesday night outside Geyserville, was only 15 percent contained as of 7:10 p.m.

Napa County has been fortunate, having no active wildfires within its borders, the county’s Office of Emergency Services said Monday. The haze and smoke in Napa air is from fires outside the Napa Valley, the county said.

A new public safety power shutoff, PG&E’s fourth this month, would take hold throughout Tuesday, moving from the North Bay to the East and South Bay regions, according to the utility. The number of Napa Valley customers who would be affected was not immediately known but was forecast to be less than the more than 30,000 left in the dark over the weekend by a combination of planned shutdowns Saturday and power-line damage caused by fierce winds Sunday morning, county spokesperson Noel Brinkerhoff said earlier in the day.

A Tuesday shutdown may affect between 240,000 and 600,000 customers, Mark Quinlan, PG&E’s senior director for emergency preparedness and response, said during a news conference Monday evening at the utility's San Francisco headquarters. The extent of the outage will depend on the number of lines considered to be at risk.

The National Weather Service forecasts wind speeds in Calistoga of 15 to 20 mph Tuesday afternoon, with gusts peaking at 40 mph that evening.

Napa County’s Office of Emergency Services said PG&E would be inspecting lines Monday for damage and gradually restoring power to homes and businesses. It may take as long as 48 hours to return some customers to the grid, the utility said.

At the peak, more than 21,000 homes and businesses in Napa were affected either by the utility’s planned shutoff Saturday or wind-triggered damage to power lines on Sunday morning.

Two of the largest Napa outages on Sunday were corrected within hours, McFarland said. Some 3,200 customers who lost power after wires fell on Alice Street were restored by 7:43 a.m. A tree limb that fell onto wires on Sunview Drive blacked out another 3,100 customers, who were reconnected at 8:43 a.m.

Napa Police on Monday reported that all traffic signals within city limits were back in operation. In American Canyon, stoplights on state Highway 29 were being powered by generators, while signals on city-owned streets remained dark and were being replaced by temporary stop signs, according to city spokesperson Jen Kansanback.

PG&E has opened community resource centers at the Napa Valley Expo at 575 Third St. in Napa, as well as St. Helena Catholic School at 1255 Oak Ave. Both centers are open from 8 a.m. to 8 p.m.

Late Monday, the Napa Valley Unified School District announced it would reopen most of its schools Tuesday, but said all campuses in American Canyon and Yountville will remain closed, along with the West Park and Browns Valley elementary schools in west Napa. All district staff members will report to work.

Calistoga’s public schools will be closed through Wednesday because so many staff members live in Sonoma County, where mandatory evacuations are widespread and all school districts have shut down.

Napa Valley College said it would reopen its Napa Valley campuses for classes on Tuesday.

Three shelters have opened in Napa to take in evacuees escaping the Sonoma County wildfire – mainly Calistogans heeding the evacuation advisory for their Upvalley town – but only one had reached its capacity by Monday, according to Brinkerhoff of Napa County. Napa Valley College has nearly filled its quota of 202 residents, but only four people out of a maximum 700 had checked into the Napa Valley Expo, while 20 people arrived at CrossWalk Community Church, which is equipped to shelter 200.

As the lights went out across swaths of Napa County for the third time this month, stores in the city of Napa once again became a lifeline for…

PG&E cuts off power to about 7,000 Napa County customers

After PG&E intentionally shut off power Sunday night for about 17,500 customers in Napa, Sonoma and Lake counties because of the extreme r…

Pacific Gas and Electric warns of yet another possible power shutdown in advance of Tuesday winds.

With Calistoga under fire threat, some residents take shelter in Napa

Fearful of Sonoma's Kincade fire, some Calistogans are fleeing to shelters in Napa.

Calistogans can smell the threat of the Kincade fire

Calistogans are getting ready in case the Kincade fire advances.

The National Weather Service has issued a wind advisory early Tuesday morning for the North Bay mountains above 1,000 feet.

Some families affected by the new round of shutoffs were still in the dark from the last round.

The scars that haven't healed

The wind howled and moaned throughout Wednesday night. My wife rolled and fretted as the house creaked and the trees swayed ominously.

The winds in the hills north of Healdsburg hit 93 mph Sunday, spreading huge flames from the Kincade Fire across the rural Sonoma County lands…

Cal Fire has announced the advisory evacuation for Calistoga has been lifted as of 2 p.m. Upon returning to households, residents are urged to…

Flames from the Kincade fire light up the horizon in Knights Valley outside Calistoga Sunday evening.

Four strike teams of 21 persons each converged on the Napa County Fairgrounds Monday morning to review plans to keep the Kincade from away from Calistoga. Units from Glendale, Acadia and Alhambra were among those sent to Calistoga.

Strike teams gathered at the Napa County Fairgrounds Monday morning to plan for the defense of Calistoga from the Kincade fire in Sonoma County.