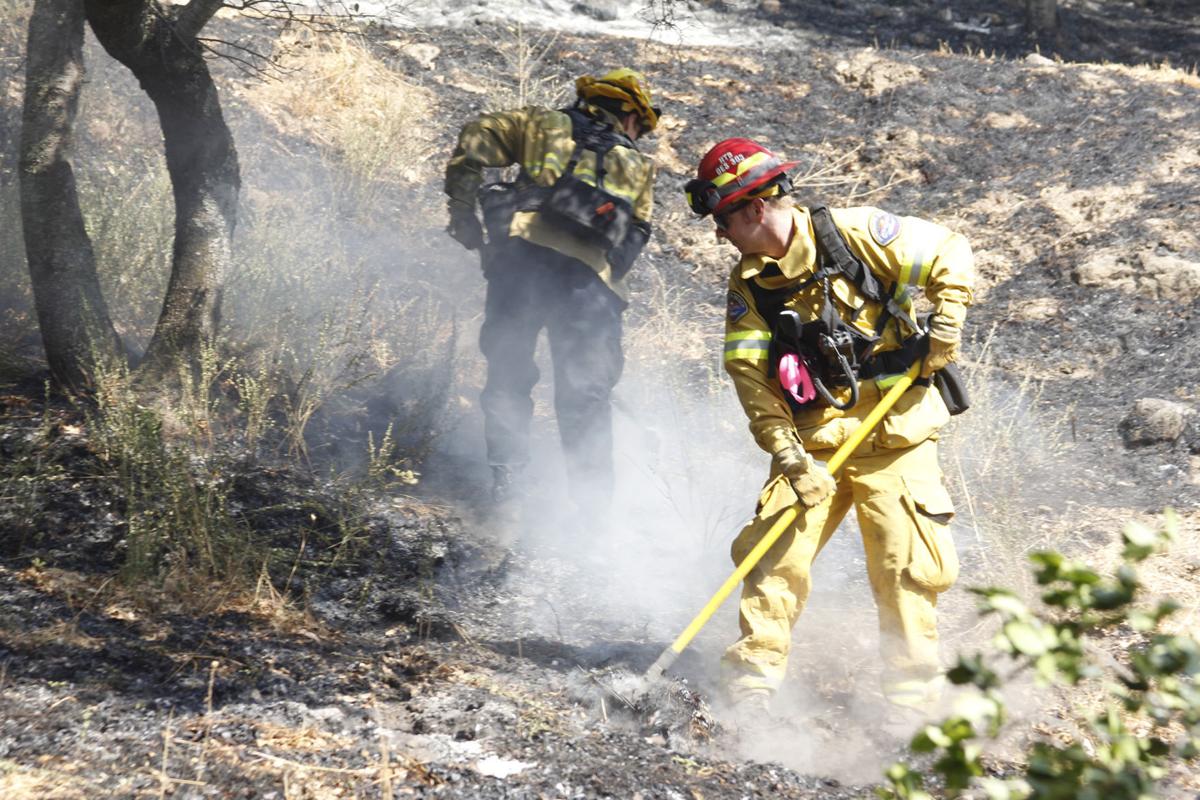 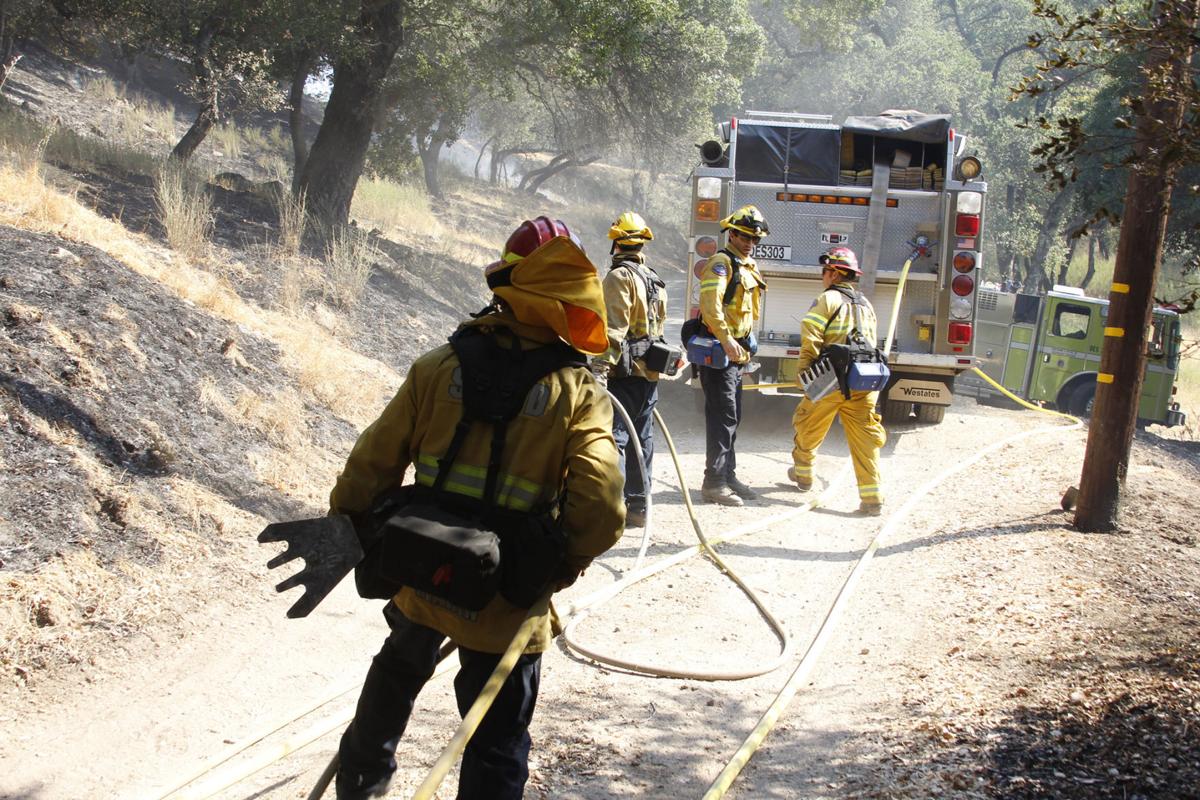 OES strike teams from Huntington Beach and Santa Fe Springs do ‘mop-up’ on the Atlas Fire at Green Valley Road on Thursday. 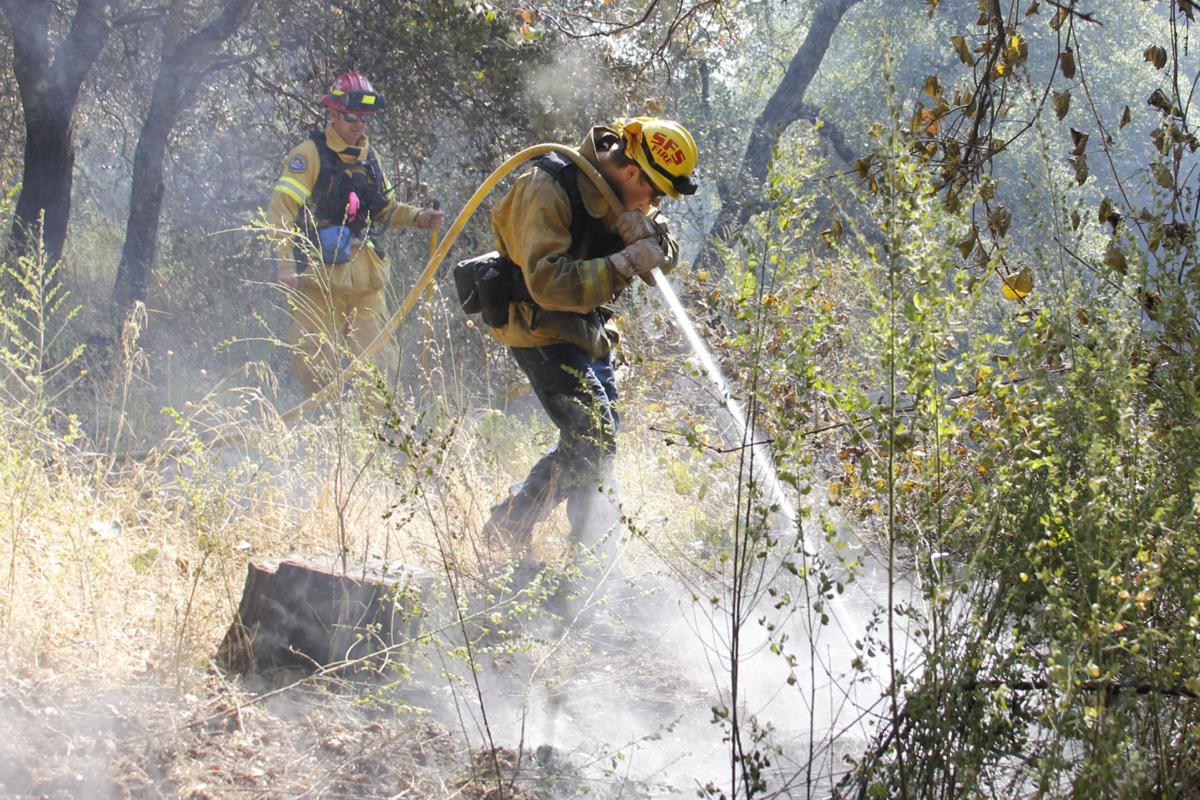 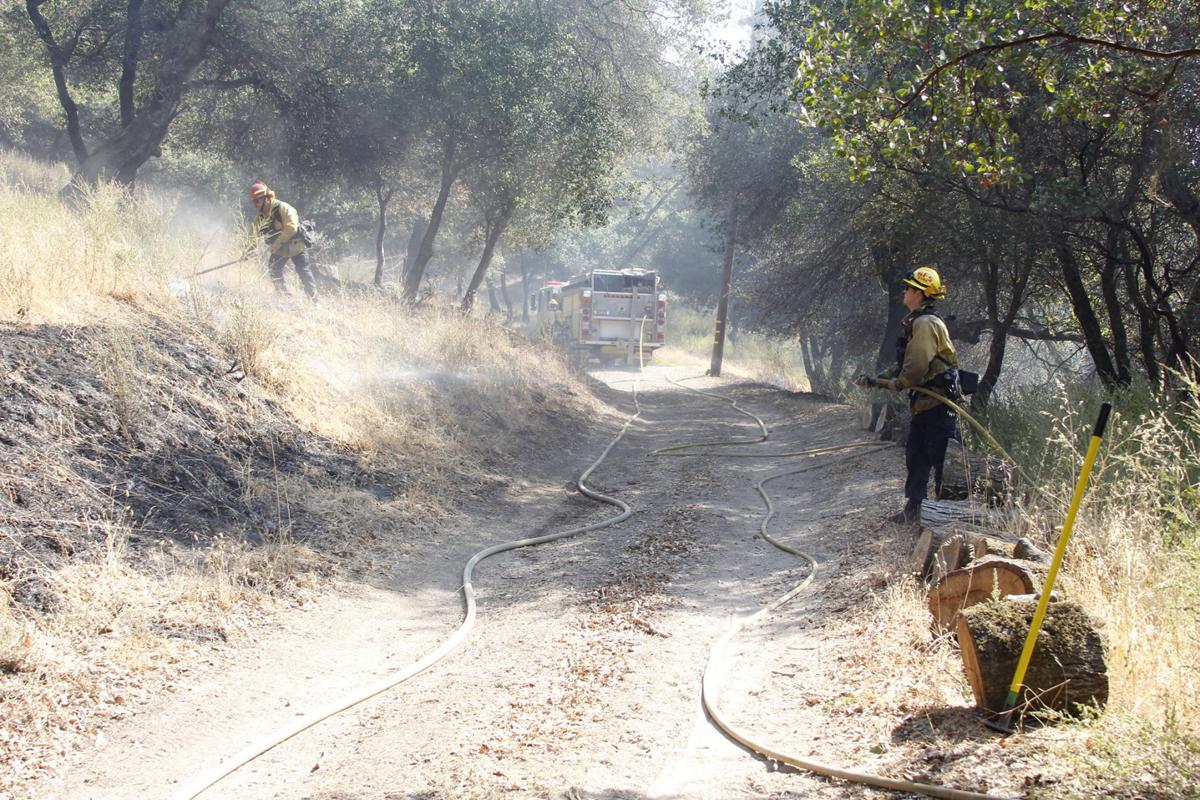 Huntington Beach paramedic Jake Snow hoses down a 'hot spot' on the Atlas Fire at Green Valley Road on Thursday. 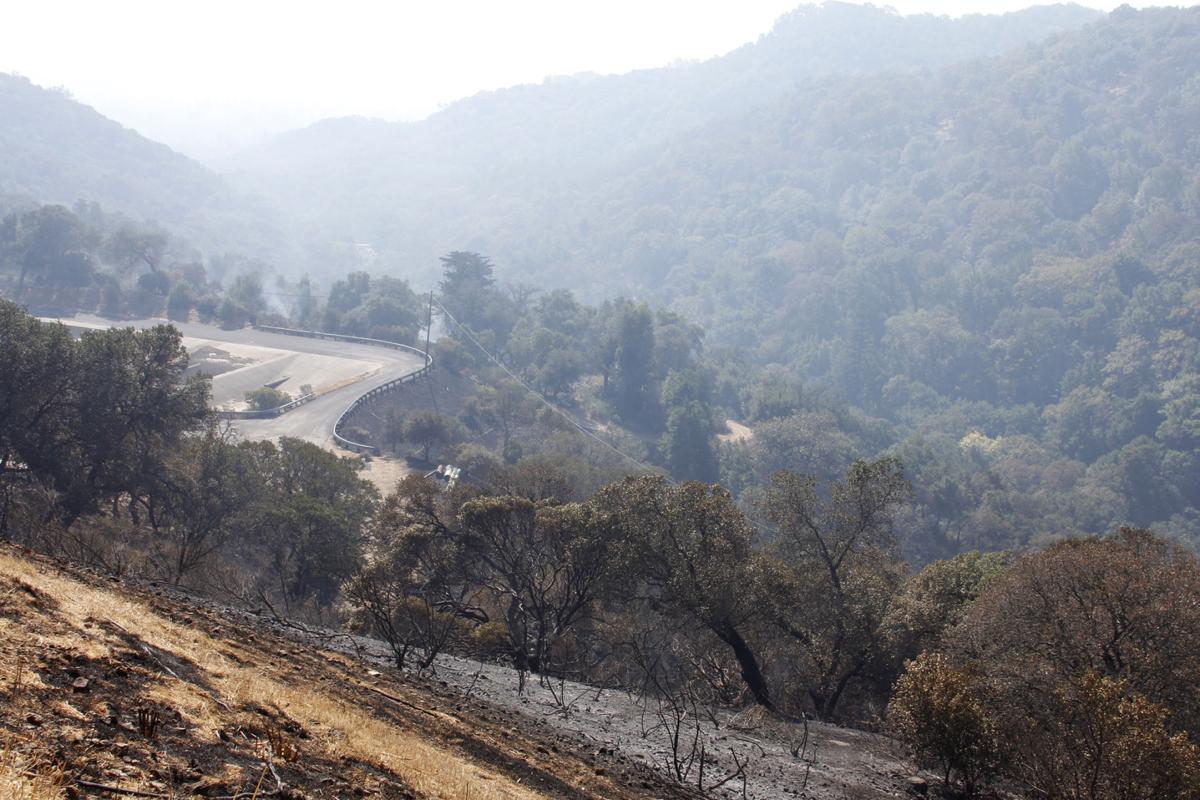 The top of Green Valley Road on Thursday following the Atlas Fire. 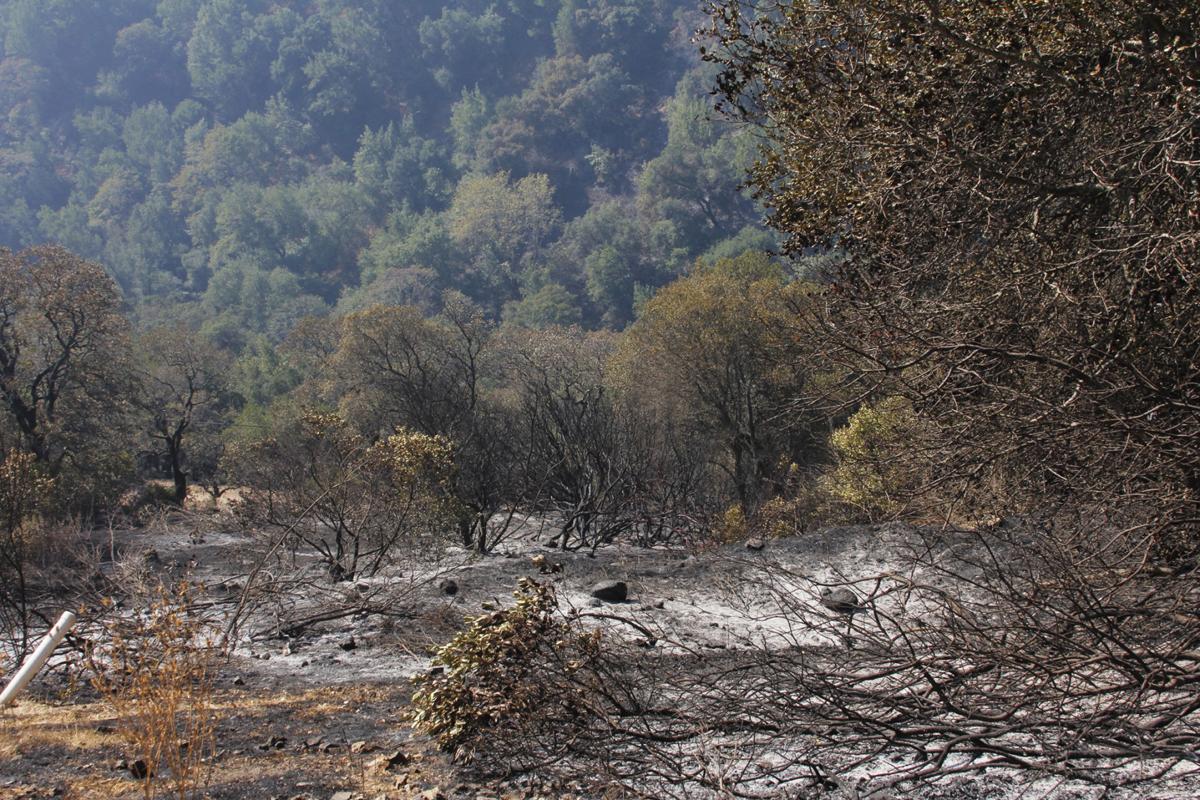 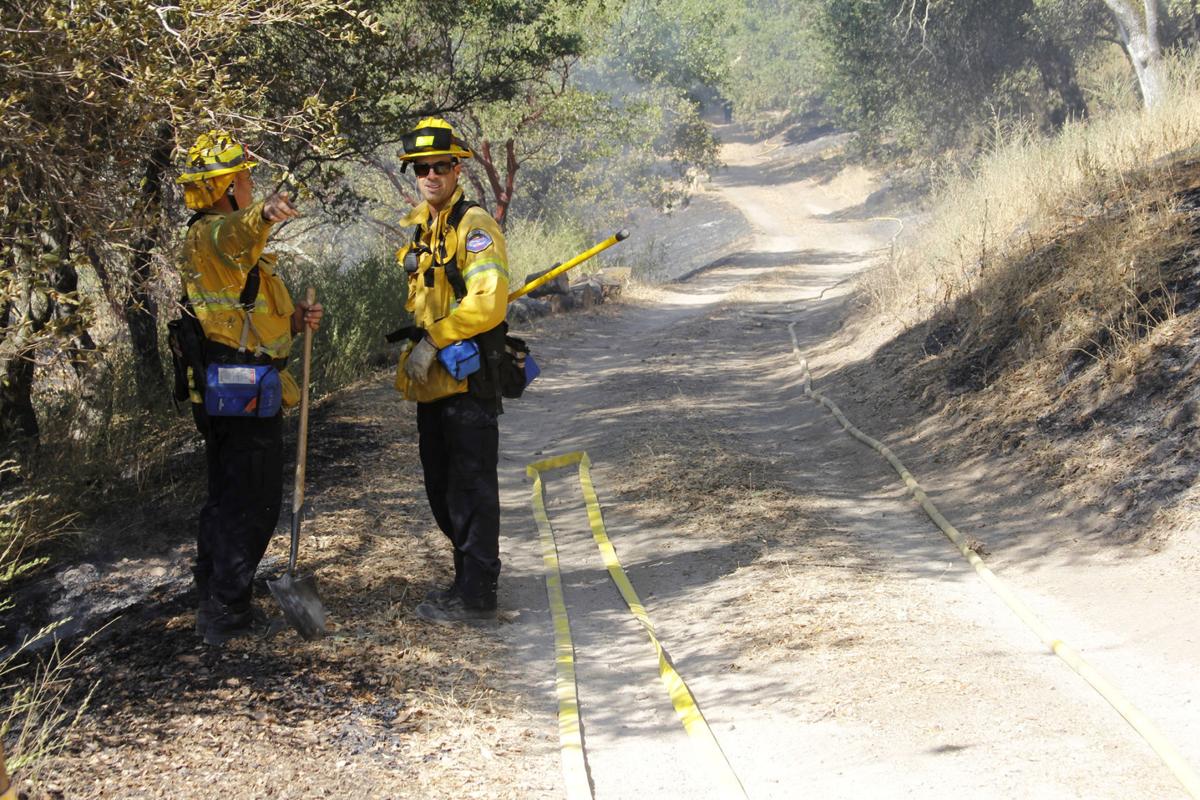 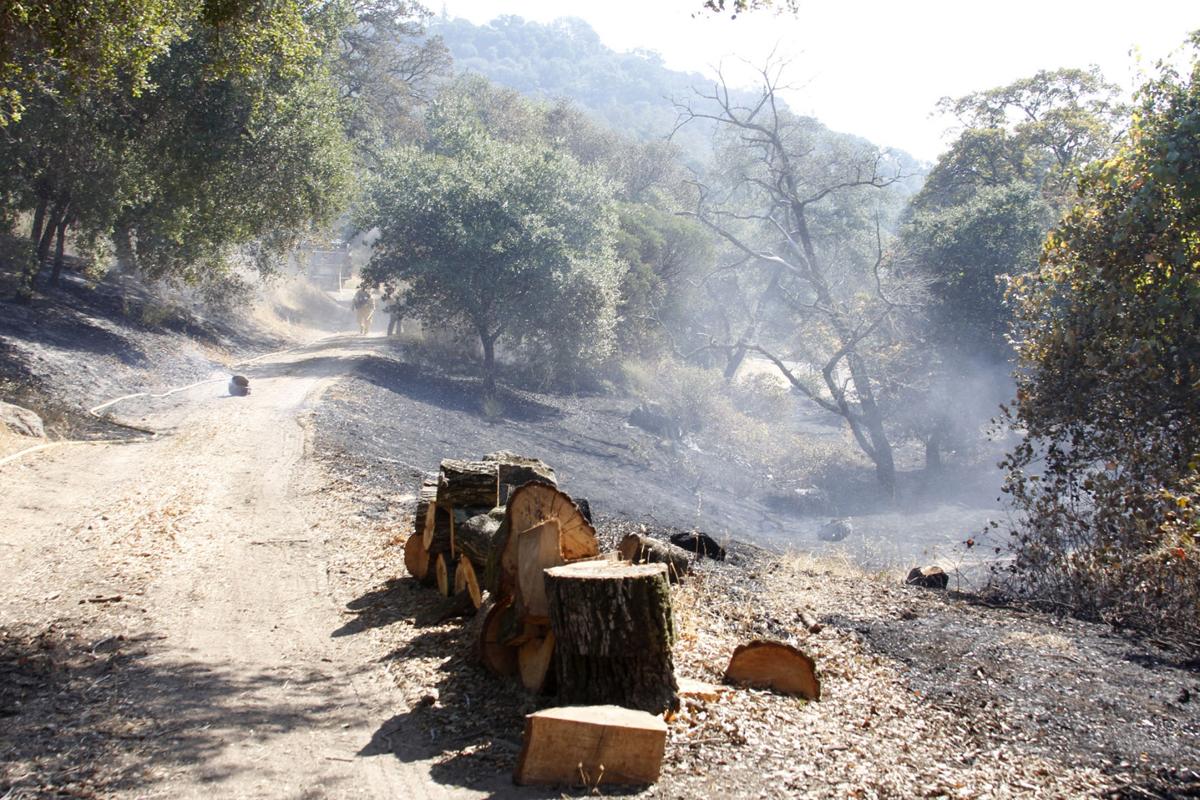 A typical shift during a wildfire is 24 hours, but that wasn’t the case for those going up against fires in Napa and Sonoma counties this past week. Some firefighters reported working four days straight with little food and hardly any sleep, catching sleep only “here and there” while sitting up in their fire engines.

“We’ve been on the line pretty much since Sunday night,” said a stubble-faced firefighter with a Cal Fire crew out of Cazadero who wished to remain anonymous. It wasn’t until Thursday when original crews started to feel some relief as additional resources filtered in.

“Typically once we get the resources in place, we can start rotating crews out,” said Fire Capt. Chase Beckman, Cal Fire/Napa County Fire. Firefighters will have 24 hours on, then 24 hours for rest and recovery. It isn’t typical for crews to be so overworked, he said, but with so much activity going on at once and limited resources, it did happen.

Now that firefighters have a handle on some of these fires and more resources have been brought in, the original crews can rest, he said.

Among the first fires was the Atlas Fire, which started off of Atlas Peak Road, south of Lake Berryessa Sunday night and grew to more than 50,000 acres, spreading into Solano County. Firefighters struggled to get any containment on the fire, now being referred to as the Southern LNU Complex, until midweek. By Saturday morning, there were 2,105 total personnel on the fire.

Meanwhile, other fires raged in Sonoma, Mendocino and Yuba counties, killing more than 30 people and taking out thousands of homes and businesses.

The Tubbs Fire, which started in Calistoga Sunday night and is now being referred to as Central LNU Complex, was 44 percent contained after reaching 35,270 acres Saturday morning. Total personnel on that fire: 2,941.

Beckman said that additional resources came in from all over the state, bordering states, Mexico and as far as Canada and Australia.

“They basically just keep putting more and more people on,” said William Stewart, co-director of the UC Center for Fire Research and Outreach at UC Berkeley. “They’re trying to figure out how to rotate people out as fast as they can.”

In the beginning of the week, a fire also burned 9,217 acres in Southern California.

Huntington Beach Fire Department firefighter/paramedic Chris Brown had been on the Anaheim Hills fire before being reassigned to the Atlas Fire on Wednesday. After a nearly 11-hour drive, the OES strike team headed to the Green Valley side of the fire to put out hot spots on Thursday.

“We can’t leave the area until it’s pretty much out cold,” said Huntington Beach Fire Capt. Sean Haynes. Haynes was using a hoe to scrape away duff, debris blocking mineral dirt that can act as fuel to a fire, while paramedic Jake Snow hosed down hot spots. At the same time, their engine was pumping 800 gallons of water to five other engines up on the nearby hills.

“We’re trying to link all the different areas of the fire together so we can get around the fire,” he said. Their efforts, combined with other efforts on the Atlas Fire, paid off Friday when containment reached 45 percent.

The mop-up crew’s job is to create a buffer between green receptive vegetation and the active fire, Beckman said. But firefighters have also been working on assisting with evacuations as well as structure defense, he said.

With red flag warnings continuing over the weekend, Beckman said the plan is to focus on two areas: life safety and property. And, thanks to evacuations in areas across the region, firefighters will be able to focus more on the latter, he said.

Although the Atlas Fire has been controlled to some extent, the ridges between Calistoga and Sonoma have a number of very active fronts, Stewart said Friday.

Stewart said that there simply were not enough resources to go around. Fires started in eight different places and were fast-moving, he said. A plethora of dry fuels combined with a lot of wind pushing the fire in different directions every few hours contributed to the swirling nature of these fires.

“I’ve seen these fires turn around in a two-hour period and just roll ‘er back the other way,” he said, noting how the direction of these fires keeps changing.

“For everybody working on this, this is the biggest, most complicated fire we’ve had in Northern California,” Stewart said. There are thousands of residential parcels inside the fire perimeter, including people who live in houses scattered along rural roads, he said. The number of people who are still unaccounted for, he said, is “sobering.”

A wedding to remember: Couple, guests escape ahead of spreading Atlas Fire

Rachel Lieberstein and Sam Ross have a wedding photo that captures more than just a pivotal moment in their lives.

What’s metallic gold on the outside, neon blue and purple on the inside, and delivers relief supplies to fire victims?

Napans slog through a disaster of historic dimensions

Reinforced concrete walls are all that remain of the home of vintners Michael Parmenter and Kiky Lee, owners of VinRoc Wine Caves at 4015 Atla…

Silverado Resort and Spa remains closed through the next several weeks, according to a news release from the resort.

Gov. Jerry Brown announced Friday that federal individual disaster aid was available to those affected by the various fires in the region. Her…

The Vine Transit bus service is offering free rides on its buses to aid in recovery from the fires, the Napa Valley Transportation Authority a…

Saturday proves to be a “good day” for Napa, not so good for Sonoma

Red Flag warnings and wind advisories are still in effect for Napa County, but overnight Friday the winds shifted in our favor. Unfortunately,…

Even as fires continued to burn, thoughts were turning to rebuilding Saturday. Rep. Mike Thompson, D-St. Helena, released a guide to resources…

Justin-Siena High School will host “Feed The Firsts,” an event to feed and celebrate the many firefighters, medics, law enforcement officers a…

Conditions in Calistoga remained stable Friday night, despite initial fears that increasing wind might push the flames down toward town.

OES strike teams from Huntington Beach and Santa Fe Springs do ‘mop-up’ on the Atlas Fire at Green Valley Road on Thursday.

Huntington Beach paramedic Jake Snow hoses down a 'hot spot' on the Atlas Fire at Green Valley Road on Thursday.

The top of Green Valley Road on Thursday following the Atlas Fire.